Sports Team of the Year: Rise of the fallen giants, Liverpool 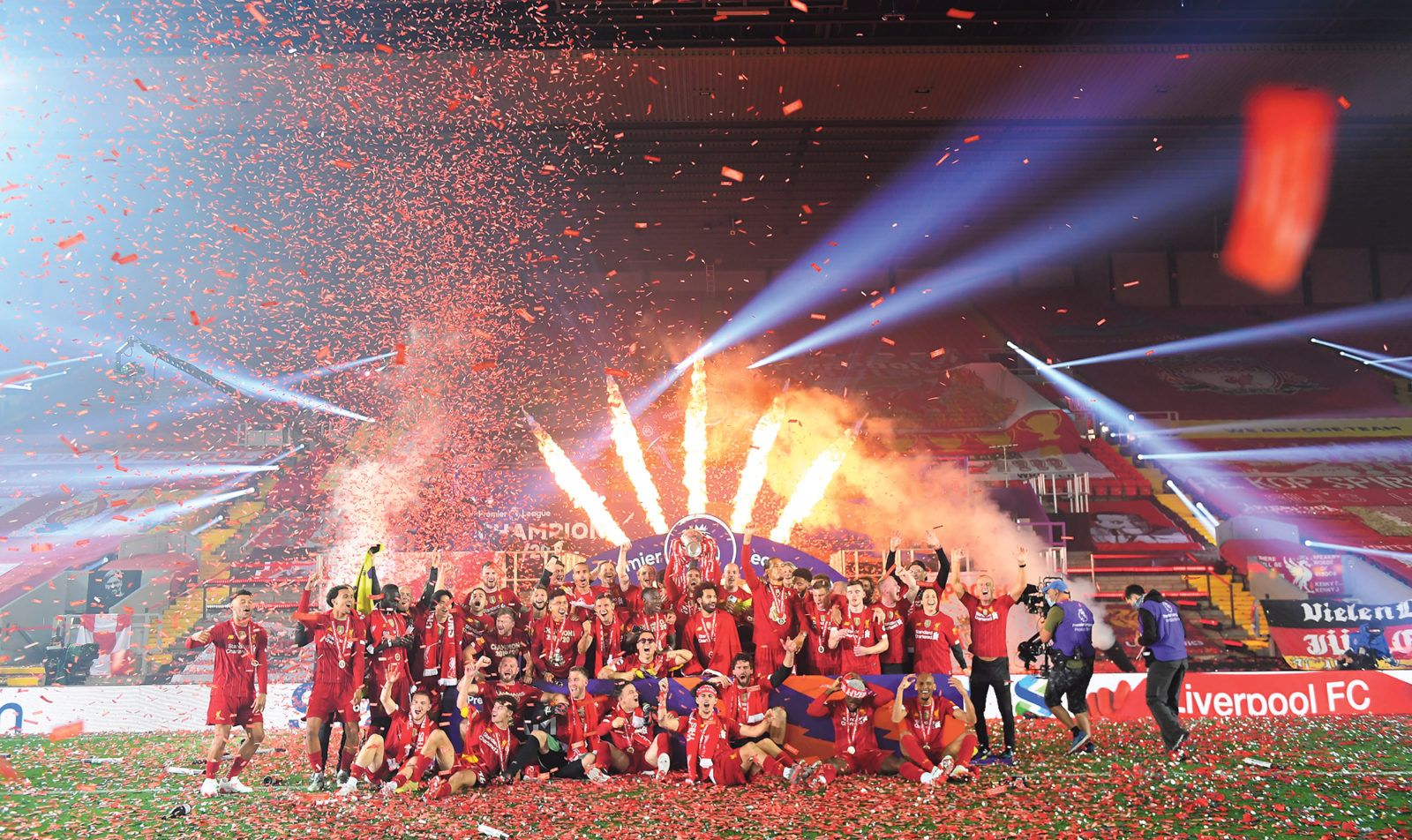 LIVERPOOL, ENGLAND - JULY 22: Jordan Henderson of Liverpool holds the Premier League Trophy aloft as the team celebrate winning the League during the presentation ceremony of the Premier League match between Liverpool FC and Chelsea FC at Anfield on July 22, 2020 in Liverpool, England. Football Stadiums around Europe remain empty due to the Coronavirus Pandemic as Government social distancing laws prohibit fans inside venues resulting in games being played behind closed doors. (Photo by Laurence Griffiths/Getty Images)

Spectacular end to a 30-year title drought makes the Reds a top team.

In a year where almost every major sport, league and tournament was cancelled or postponed because of the impact of coronavirus, Liverpool Football Club were comfortably the sports team of 2020.

They deserve the title of team of the year because they set a new standard in the Premier League before lockdown threatened to rob them of the title. In the end, they ended a 30-year title drought in style.

They also won the Fifa Club World Cup in December 2019, defeating South American champions Flamengo from Brazil, 1-0 in the final before shattering records on their way to the 2020 Premier League title.

The context of Liverpool’s title win is also not only defined by the global pandemic, but by their own internal virus, which had made Liverpool seem immune to league success for three decades.

For a club that had won 18 league titles by 1990, a 30-year wait for their 19th crown and the first in the Premier League era (Liverpool’s previous wins were in the old “first division”) had become a self-fulfilling prophecy of doom. Between league titles, they still won 14 major trophies, including two Champions Leagues – but the domestic title was the one they craved.

With each passing season and each missed opportunity, it seemed that the Premier League would forever elude the Reds. Since their last successful championship campaign, Liverpool had lost ground to other rivals.

Manchester United, which had seven first division titles by 1990, won 13 of the 28 completed Premier League seasons and moved above Liverpool on the overall table with 20 titles. Arsenal, Chelsea and Manchester City won multiple times and even Blackburn Rovers, Leeds and Leicester won England’s elite division while Liverpool fumbled in relative mediocrity.

The Premier League itself also changed in the 30 years between Liverpool’s titles. It became the richest league in the world and a billionaire’s plaything. It attracted the best players and coaches and, as a consequence, improved.

Liverpool, considering their status as one of the best three club teams in the world in 1990, should have been in the vanguard of English football’s revolution, which was underpinned by a voracious football appetite from broadcasters. Sky TV saw the potential in commercialising English football, which already had a strong global footprint.

Sky’s money and marketing savvy supercharged the newly formed Super League and clubs such as Manchester United and Arsenal recognised the need to see football primarily as a business built on winning titles.

Comfortable in their success, Liverpool failed to fully see the future of the league and grasp the opportunity to build their empire. They never completely fell away, but, barring the odd year, they were never serious title contenders again until 2019.

As England’s fallen giants, at least domestically, Liverpool were under more pressure than any side since Manchester United broke their 26-year long drought in 1993.

To make matters worse, Liverpool came up one point short to Manchester City in the 2018/19 season despite amassing 97 log points over the course of the 38-match campaign. That would have been enough points to win the Premier League in 26 of its 28 seasons. Rival fans revelled in the growing Merseyside angst. From the outside, Liverpool really did appear cursed, but on the inside, belief never wavered.

All team sports need an inspirational, totemic leader to carry them over the line. Amassing a squad of superb players with brilliant tactics is often not enough. To create sustained excellence, particularly in a ruthless league, requires planning, vision and personality.

The acquisition of German manager Jurgen Klopp in 2015 was the most important part of the plan to guide the Reds back to the promised land. But it was not a simple case of appointing a manager and everything would fall into place.

The path to the Premier League title actually started in 2010, when the Boston-based Fenway Sports Group (FSG) purchased the club. FSG had taken another fallen giant of sport – the Boston Red Sox baseball team – and turned them into World Series champions in 2004, a full 86 years after their previous Championship.

FSG stabilised the club’s finances after the previous owners had pushed Liverpool to the cliff of bankruptcy. To do that, they were parsimonious in the transfer market (by Premier League standards) but gradually came to realise that they would have to spend large sums of money on some players.

Once Klopp arrived, the purse strings were loosened, but incrementally. In 2016, before his first full season in charge, Klopp purchased Sadio Mane and Gini Wijnaldum for €68.7-million. He also picked up defender Joel Matip on a free transfer and elevated wingback Trent Alexander-Arnold to the senior team from the under-18 ranks. They would all play key roles in the team’s success.

In 2017, he splurged €42-million on striker Mohammed Salah and later a record €84.65-million on defender Virgil van Dyk, although he was only set to join at the end of the 2018 season. That same year, he signed left back Andy Robinson and midfielder Alex Oxlaide-Chamberlain. And he completed the project with purchase of goal-keeper Alisson Becker, and midfielders Fabinho and Naby Keita for a combined €163-million. Those purchases were offset by the sale of star playmaker Phillipe Coutinho to Barcelona for €145-million in 2017.

Although they fell agonisingly short of the league title in 2019, they delivered a sixth Champions League win. It was the foundation for finally delivering the holy grail to Anfield again.

“If somebody would have said: ‘You can become champion in any country this year and you can decide which team you want to be in to have it very special’, I think the choice would have been Liverpool,” Klopp said after the title was secured. “Because it was the one that everybody wants to be part of, and we are lucky enough to be part of this.

“I appreciate that a lot, to be honest, that it’s a really big one.

“Not that other championships will be forgotten … but, this one, I think nobody will ever forget. It’s not possible. That makes this pretty special.” DM168

And the runners up are:

The German football giants won the Bundesliga, the German Cup and, most importantly, the Champions League title to cap a magnificent season.

Winning the Bundesliga has become routine in a league in which Bayern are seldom seriously challenged. They won an eighth consecutive domestic title. In Europe, though, they had not won the Champions League for seven years. It was the priority for the Bavarians in 2020. In all competitions, they won 29 of their final 30 matches in 2020, with one draw.

When play resumed after Covid-19 threatened to halt their march to Champions League glory, Bayern continued to fell every opponent with their free-scoring spirit.

Bayern became the first team in the tournament’s history to win 11 games in a row in the competition, which included an 8-2 quarterfinal evisceration of Barcelona. They duly won the title for a sixth time when beating Paris St Germain 1-0 in a tight final. It was Bayern’s first Champions League success since 2013, earning coach Hans Flick his third major trophy after only nine months in charge, adding to the Bundesliga and German Cup crowns.

After a cagey first half in the showpiece match, Bayern deservedly took the lead on the hour when Joshua Kimmich’s inch-perfect cross was neatly headed into the far corner by Kingsley Coman. It was Bayern’s 500th goal in the Champions League.

Coman, a Parisian by birth, drove a dagger into the hearts of his countrymen, denying PSG their first Champions League title, while putting Bayern back among the continent’s elite.

Much like Liverpool in the Premier League, the Lakers were the fallen giants of the NBA. The league’s second-most successful team, with 16 NBA crowns before this season, had failed to make the playoffs for six consecutive seasons.

Considering the Lakers had not missed a playoff for 65 years until 2013, it was a crisis. They brought in the NBA’s most super of superstars, LeBron James, in 2018 to try to arrest the slide. But in his injury-plagued first season at the club, they missed the playoffs again. But in 2019/20, with King James back on court, surrounded by support acts such as Kentavious Caldwell-Pope, Rajon Rondo and rising star Anthony Davis, the Lakers took control of their division.

Rallying from the death of former Lakers legend Kobe Bryant in January, the Lakers clinched a playoff berth before coronavirus forced the suspension of the league.

When the season re-started in a bio-bubble at Disney World in Orlando, the Lakers picked up where they left off. They entered the Western Conference playoffs as top seeds for the first time in a decade.

Portland, Houston and Denver were knocked off on their way to an NBA finals showdown with the Miami Heat. They won the series in six games, making them the first team to win the NBA title following a season in which they missed the playoffs. DM168