(Not) the Interview of the Year

Kataza: ‘Why are you in my home, pesky human?’ 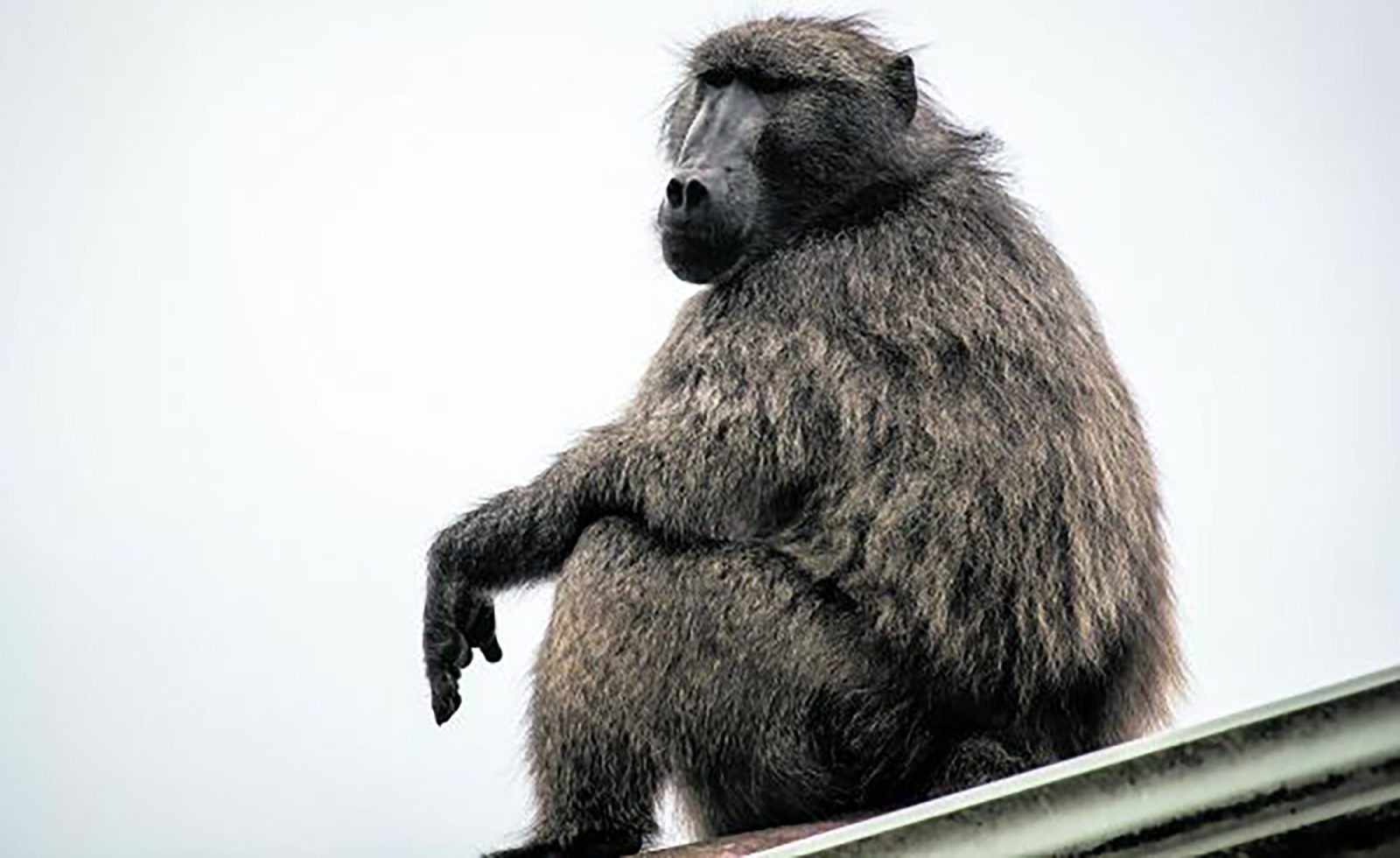 SK11 - Kataza. A wild animal in the urban space.

He held out for transport back from ‘snooty’ Tokai, and now he wants chelsea buns and beer.

The small community of Kommetjie on the Cape peninsula know him as Kataza, a magnificent chacma baboon. The City of Cape Town know him only as SK11, a troublesome alpha male. In late August, the council had him darted and relocated to Tokai. The outcry was immediate. A petition to have Kataza returned was signed by more than 30 000 people. One man even filed a high court application. The story went around the world. It took almost three months for the council to back down.

No one knows for sure where it started, but Wynter says she overheard a fisherman down at the Kom telling a man on a bicycle. That night she told her book club. By morning the whispers were permeating the village. Kommetjie stirred. Soon, the sightings began trickling in. He was seen outside the bakery. On Caprice’s wall. Under the milkwoods. In Roger’s vegetable patch. Kataza was everywhere. Kataza was back!

It sounded too good to be true. Like everyone, I had been crying myself to sleep at night ever since Kommetjie’s most beloved baboon was abducted by men with dart guns and bakkies. Snatched in broad daylight. It had left us reeling. Kataza is gone! They have taken him!

Strapping on my eco-friendly boots and dabbing ethically sourced muti on my face to protect myself from snakes and muggers, I grabbed my equipment and set off to see if the rumours were true.

Kataza’s mob was a wily bunch. Their natural habitat ranged from the Slangkop mountains to Frau Wolfenbonker’s kitchen. It wasn’t going to be easy.

I trudged through the fynbos, leaving a trail of chelsea buns in my wake. If Kataza was back, he’d find me. Next to low-ranking females, Kataza loved chelsea buns the most.

I found a flat rock and waited, occasionally calling out in baboon. I had developed a fairly good grasp of the language after taking lessons from a local woman by the name of Jenni Trethowan. She was fluent in baboon after having spent years hanging out with Kataza and his mates. She was their most trusted human and had, in fact, gone to Tokai after the rendition and met up with Kataza. She had offered to walk with him back to Kommetjie but he wasn’t keen, preferring to hold out for some kind of transport. Not just a pretty face, that one.

I hurled a bun into the fynbos as if it were a fragmentation grenade, opened a beer and lay back. It was the grunting that woke me. A huge chacma, sitting maybe six metres away, was licking his fingers and eyeing me suspiciously. I couldn’t be certain it was Kataza because all baboons look the same to me. I admit this with some reluctance, knowing Jenni would call me a specieist pig and have me run out of the village.

I sat up, cleared my throat and took out my notebook. This seems a good place to begin. I’m not going to indicate throughout who is speaking. If you can’t tell the difference between a human’s questions and a baboon’s answers, you probably shouldn’t be reading this newspaper unsupervised.

Welcome home, sir. I can’t tell you how much …

Do you have more buns?

Why are you in my home?

Would you mind if I ascertain your bona fides? (At this point I had to stop the interview to explain why I was talking in “high baboon”, a dialect spoken mostly by older chacmas and those from certain parts of Constantia.)

Fuck you. I am Kataza.

(Canine teeth were displayed, forcing me to adopt a submissive posture.) Yes, I’m sure you are. Please relax. The thing is, Mr Kataza, when you were last seen in these parts, you were wearing some kind of tracking collar. This no longer appears to be the case.

They took it off me, didn’t they?

(Sigh) The bastards who grabbed me. I don’t know who they were. You all look the same to me.

Why did you allow yourself to be captured? (I was about to reference Donald Trump’s remark vis-à-vis John McCain having been captured by the Vietnamese but thought better of it).

I was in mid-forage, wasn’t I? Snout-down looking for mushrooms.

Magic mushrooms? You were, after all, captured in Scarborough.

That’s what I thought when I woke up outside Pollsmoor Prison. Reckoned I must have ingested a bit of the old psilocybin … accidental, like.

You know your fungi. I’m impressed.

Don’t be condescending to me. We know more than you might think. Got more buns?

Maybe later. Okay, so they removed your collar and brought you back. Why would they do that? My people shoot your people with paintball guns and let off bear bangers to get you out of the village. Why would they bring you back?

Because your people wouldn’t shut up about it. You damn near caused an international incident. I heard about the protests. Bring Kataza Back! Pretty cool for a horrible species. Were you part of it?

Yes, of course. Sort of. Not really. I mean, you’re a baboon. You could have found your own way back, right?

From Tokai? Not bloody likely.

You could have used the stars to guide you.

Pshh. I didn’t even want Jenni to guide me and she’s a mate. Not a mate-mate, obviously. Anyway, they took me there, they must bring me back.

Were you not happy in Tokai? I read that a professor from UCT said you were settling in. Even getting approached by females. Is that true?

Have you ever been approached by females?

There have been occasions, yes. Not as often as …

Then you’ll know it’s not always a good thing. These girls were snooty. Upper class airs and graces. I barely understood their accent, let alone their need to be groomed relentlessly until deigning to present.

So now I’m the Herman Mashaba of the chacma world?

Calm down. How do you even know about … never mind. There were also reports of inbreeding going on. Apparently you have a thing for, er, low-ranking females?

(At this point Kataza smiled but said nothing.)

How do you feel about being back? Did your people recognise … I mean, miss you? Apparently there’s another alpha by the name of George. Are you getting along?

George is a pushover. It’s Jantjies I’m worried about.

Jantjies? What kind of …

Hey, I’m just using the names you give my people. You wouldn’t even be able to pronounce their real names. He’s a pushy sub-adult. Young, dumb and full of …

Ah, yes. Kommetjie has plenty of juveniles just like that. Anyway, it’s late and I must get back. I hope you appreciate the effort we humans have made to get you back home.

I’d expect no less. Got any buns?

Yes dear readers, we are aware that a primate is any mammal of the group that includes lemurs, monkeys, apes, and humans. Through his sheer chutzpah, Kataza is the winner hands down. The editor.

Kataza: ‘Why are you in my home, pesky human?’