Why is murder once again stalking Glebelands Hostel? 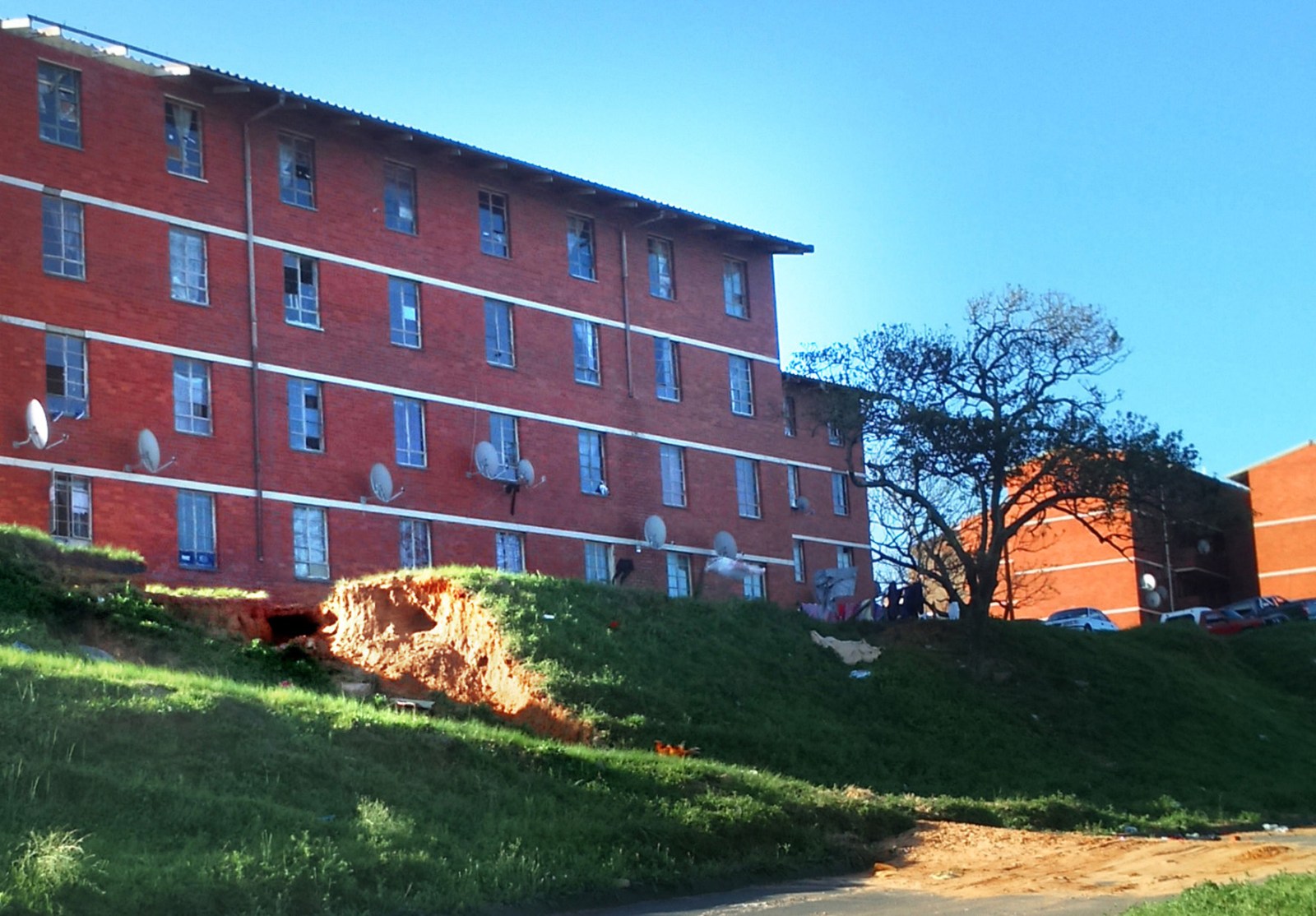 It has been three years since the arrest of the Glebelands Eight, the Umlazi hostel’s alleged hit squad led by rogue Durban Central police detective Bhekukwazi Mdweshu. Hostel-related murders have since dropped by more than 80%, but at least seven people have been killed in the past 12 weeks. Who is responsible this time?

Little is clear, especially since increasingly beleaguered residents have been muted by fear yet again. Although they say renewed attempts to extort “protection money” – seemingly for self-enrichment this time, not the slaughter of former hostel leaders – have triggered the resurgence in violence.

According to witness testimonies in the ongoing Glebelands Eight trial, money “collected” from residents of blocks under the control of Mdweshu’s cabal were used to buy guns and ammunition, to pay hitmen, to bribe police and court officials or for legal fees if one of their number was arrested. Sometimes cash was extorted to cover transport so accomplices or allies of the accused could show their support in court. There is a widespread and mostly unspoken understanding that those who fail to contribute will face eviction, assault or murder. Without exception, Glebelands “collections” lead to death since many residents simply cannot afford to pay.

However, things have changed somewhat since the detention of the Glebelands Eight. Most of the hostel’s block committees – leadership structures whose members were accused by Mdweshu’s squad of “selling beds” (the unlawful sale of space in hostel rooms) and therefore were seemingly deemed targets for assassination – were eliminated during the 2014-17 bloodbath that turned this vast low-cost housing complex into one of the most dangerous places in South Africa. Support for, and cohesion among, the remaining Glebelands Eight associates has waned and court attendance petered out after the trial was moved to Pietermaritzburg.

So what is behind the latest “collections”?

Residents claimed that in September 2020 certain Block O leaders convened a meeting at which they allegedly announced that each resident would be required to “donate” R100. About a week later, at 7pm on Friday, 26 September, resident Nelani Sithathu was shot in the head while sitting in a vehicle with a friend near Block 45. Residents alleged Sithathu had been out on bail after having been arrested with another resident for possession of unlicensed firearms. After his arrest Sithathu had apparently severed ties with the remnants of Mdweshu’s squad with whom he had allegedly been associated. According to police reports, the motive for the murder is unknown and no arrests have been made.

Mlungisi Mnguni – a former Block 53 leader and Peace Committee member – soon followed Sithathu to the grave. He was gunned down in his room on the night of Saturday, 24 October. He had reportedly been a close ally of Wonderboy Hlophe, brother of Glebelands’ alleged warlord, the late Bonga Hlophe, and among Mdweshu’s co-accused. Sources claimed Mnguni had been involved in the extortion racket at Glebelands’ old blocks, selling beds, illegal evictions and other serious crimes including rape. This could not be confirmed.

Rumours of divisions among Mdweshu’s former loyalists have surfaced – a power struggle between three rival criminal groups to gain control of the hostel’s extortion and bed-selling rackets in the absence of the powerful Glebelands Eight.

In November another R100 was demanded of Block O residents. Shortly thereafter, on Friday, 13 November, a Block O man was killed. It was suggested he had refused to contribute, as had his relative who was killed the year before.

It was alleged that a taxi driver and block leader, apparently recruited by Bonga Hlophe and Mdweshu a few years before, had been in charge of these “collections”. Sources claimed the driver, who apparently split from Mdweshu’s cabal, has since emerged as one of the prime contenders in the recent power struggle. And, they say, he has a powerful secret weapon – a much-feared, highly skilled hitman, freshly returned to Glebelands from prison.

Fewer than 48 hours later, two more victims were added to the growing death toll. In broad daylight on Sunday, 15 November, a lone gunman reportedly entered the Block 53 room of a young man known as “Manukuthu” Bhaca and shot him dead, along with a friend. Bhaca – who hailed from the Eastern Cape and was said to have fallen in with the wrong crowd after arriving at Glebelands a few years before – was allegedly responsible for a string of murders in his home province. His friend, it seems, was not a target and simply in the wrong place at the wrong time.

The killer (we will call him “L”), who was seen by a number of residents, is said to be working for the Block O taxi man. Sources claim he is from Mount Ayliff and returned to Glebelands recently after a few years in jail. Notorious for his brazen ferocity and deadly marksmanship, L is said to have struck fear into the hearts of many of Mdweshu’s former accomplices, some of whom have reportedly fled the hostel.

In early December word went out that eight hitmen from Harding had been brought to Glebelands to “deal with” L. Around the same time reports surfaced of a group of eight “strangers” who allegedly approached residents of blocks 55, 56 and 57 who intended returning to their rural homes over the festive season, demanding that they pay them to “protect their rooms”. A Block 57 source confirmed that “unknown men” had instructed each resident to pay R50 by Sunday, 13 December.

However, it was alleged that when L heard that hitmen sent to kill him were at Block 57 he immediately went to confront them and they apparently “ran away”. Some sources claim L has publicly vowed to avenge all victims of crime at Glebelands. Others say L is working for a rival criminal gang, that he is “not right in the head” and is wanted by the police.

On 17 or 18 December, death visited once again. Although the details are sketchy, it was reported that a resident was shot after trying to extort protection money from Isipingo taxi drivers. It is unknown whether the murder took place at Glebelands or elsewhere. It is also unclear whether another incident about the same time, in which two men were killed near Block H, is linked to the taxi-driver matter.

Glebelands women have not been spared either. On 4 December, a Block 48 woman and former Peace Committee member was allegedly robbed of stokvel money. Tragically her daughter who was visiting was shot as she tried to escape through the window of her mother’s room. She was apparently admitted to hospital in a critical condition but survived.

To what extent this sudden uptick in violence is due to the recalibration of previously cohesive criminal groupings, or more general social instability brought on by radically elevated levels of unemployment and poverty stemming from earlier Covid-19 lockdown measures, is not known. But what is very clear is that residents are once again under fire and the authorities are fiddling while Rome reignites.

During the height of the first wave of the coronavirus, poor communities everywhere – particularly hostel dwellers – were reeling from illness, heightened unemployment and widespread hunger, there was an urgent need for food, soap and sanitiser, and several blocks had still not been fixed since storms battered the hostel in 2017, leaving serious structural damage. This is not to mention historic overcrowding, unhygienic, poorly maintained plumbing, shared ablutions and haphazard waste removal. But despite all this the eThekwini municipality, in its wisdom, undertook to revamp Glebelands pedestrian sidewalks.

A resident condemned the cosmetic refurbishments: “Yes our place looks nice now. You will think you are driving into La Lucia or Umhlanga Rocks. But people must see how we are living inside our blocks. Nothing has changed. And it looks like the violence is starting again, but the government isn’t doing anything about that either. It is clear they are only interested in benefiting from hostel contracts. They don’t care if we are killed by corona or poverty or by the thugs. When there is money involved… oh God! Life becomes too cheap!” DM