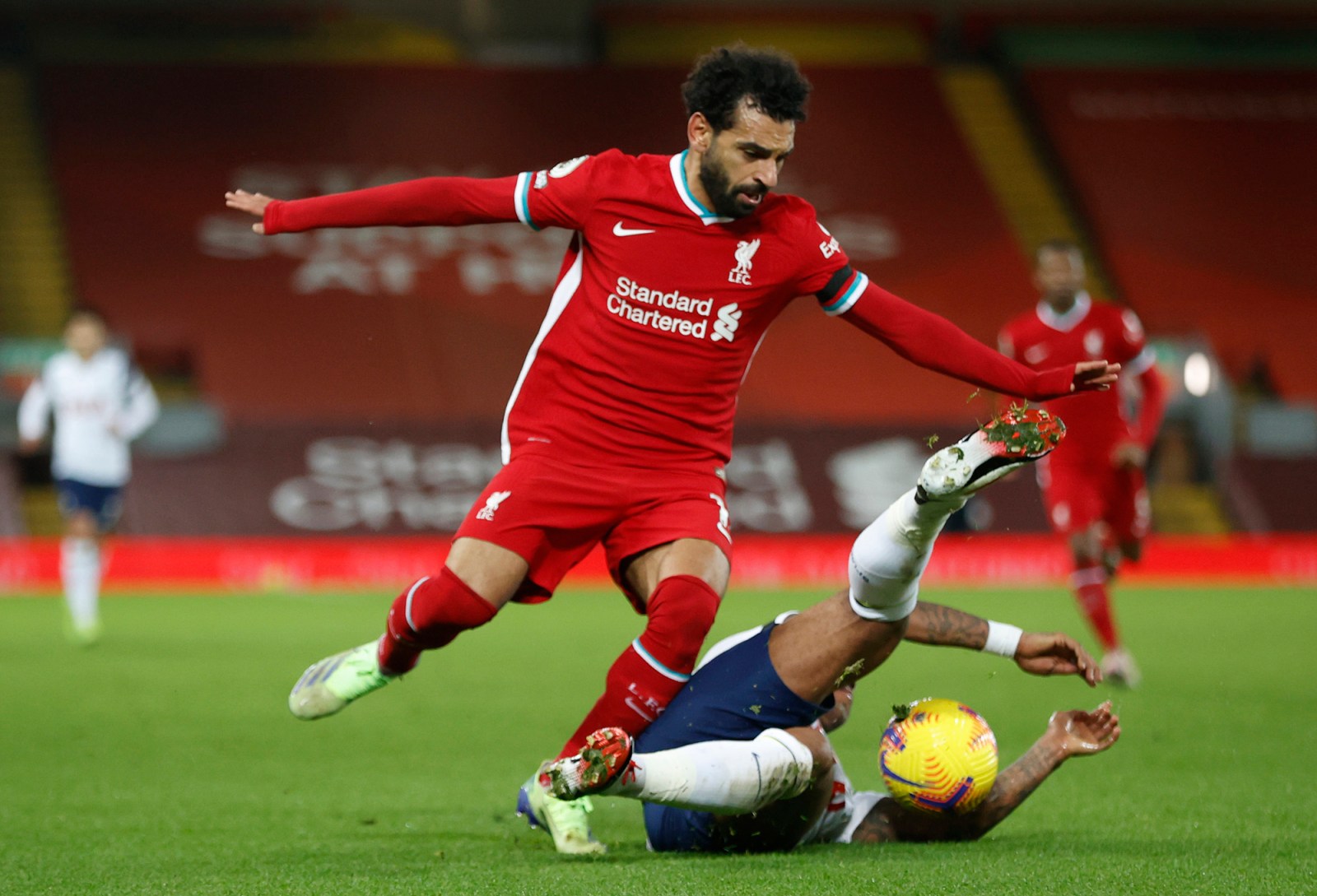 Mohamed Salah of Liverpool is tackled by Steven Bergwijn of Tottenham Hotspur during the Premier League match between Liverpool and Tottenham Hotspur at Anfield on December 16, 2020 in Liverpool, England. A limited number of fans (2000) are welcomed back to stadiums to watch elite football across England. This was following easing of restrictions on spectators in tiers one and two areas only. (Photo by Clive Brunskill/Getty Images)

Liverpool may have won the battle by beating Tottenham Hotspur midweek, but the war is far from over in what promises to be an enterprising title race this season.

Around this time in 2019, Liverpool was an unstoppable runaway train. Jurgen Klopp’s men were bulldozing any and everything in their path as they hungrily and passionately pursued their first league crown in 30 years.

Manchester City, their closest rivals, were a mammoth 14 points behind at the time. They had conceded that the race was already over – halfway through the season.

“It’s unrealistic to think about it [catching Liverpool]. When a team has the numbers that Liverpool has, why should we think about it, when we are 14 or 17 behind,” said City star Sergio Aguero 12 months ago.

This season, things are slightly different. Heading into the busiest period in the Premier League, where teams play every two days on average starting on Boxing Day, Liverpool are once again at the summit. The difference is that as opposed to last season, the train hasn’t run as smoothly.

Along the way, train conductor Klopp has had to deal with the frustration of the engine breaking down, with key parts falling off the structure at regular intervals.

One key component that Liverpool have lost is central defender Virgil van Dijk, who was a vital cog as they raced to the crown last season. A knee injury ended his season just a couple of weeks into the campaign and injuries have continued to mount up.

Other components essential for smooth operations have also fallen off the train, but been recovered and put back in place. These include the likes of Alisson Becker, Joe Gomez, Fabinho, Jordan Henderson and Joel Matip.

This damage to key parts in the mechanics of the team has stagnated the ability for the Reds to really press on. Regardless, after their edging of nearest rivals Tottenham Hotspur 2-1 earlier this week, they are once again back at the summit of the log.

This is a “tough period, really tough period”, said Klopp following their vanquishing of Jose Mourinho’s men. “It was a top game, [we] deserved the three points against a top side, organisation-wise so difficult to play against them with the counter-attacking threat they have. So, I liked the game a lot.”

Klopp was paying homage to the work that serial winner Mourinho has done at Spurs since he took over from the sacked Mauricio Pochettino in November last year.

Mourinho found the Lily Whites languishing in 14th position, but salvaged the season as they finished sixth overall.

This season he added reinforcements such as midfield enforcer Pierre-Emile Højbjerg, while bringing the best out of two of Spurs’ best players – Harry Kane and Son Heung-min.

This has seen the London side competing on par with Liverpool at every turn, making sure that the Reds don’t repeat the blitz they subjected rivals to last season.

To see his team trailing Liverpool by just three points, with 13 games played so far, will give Mourinho undeniable satisfaction – especially considering that following his ill-fated spell with Manchester United, he was written off as “a dinosaur competing with crocodiles”.

But he was bristling after the midweek loss at Anfield, despite his side only having 21% possession.

Critics said his tactics were archaic and he would never compete again. Yet here he is, with a realistic chance of handing Spurs the first league title in 59 years.

Mourinho has turned the side into one the best counter-attacking sides in Europe, as was evidenced by the equalising goal versus Liverpool.

Added to that, he is back to his mind-game-playing and feather-ruffling best – as he showed in the build-up to the match with Liverpool when he questioned whether Liverpool were indeed experiencing an injury crisis.

Both Manchester clubs have so far struggled to keep up with Liverpool and Spurs, with inconsistency their undoing. In fact, the majority of the clubs that are behind Liverpool and Spurs have blown hot and cold this season. This includes pre-season mega spenders Chelsea. The Londoners spent £222-million (about R4.45-billion) on new recruits for Frank Lampard to take on Liverpool. So far, the Blues have failed to be consistent, despite all that money spent.

Following the midweek fixtures in the league, Chelsea trail Liverpool by six points, and are sixth on the log. Worryingly, after a promising run where they went eight games undefeated, they have lost two games in a row. “We need to reflect on the two games we have lost points in, which is disappointing, but also know this is a long season,” he told the club’s official website.

“We’re a young group, some players are new to this league, they need to wake up to what this is about right now, because games like the last two prove it.” In the mix among the chasers is an unlikely team – Southampton. The Saints, spearheaded by former Liverpool forward Danny Ings, have punched way above their weight.

Although Ralph Hasenhüttl’s team is unlikely to be dreaming of a Premier League title, they will be hoping their brilliant start to the season can propel them to European football next season.

Following their 1-1 draw with the struggling Arsenal midweek, they are currently in third, four points behind leaders Liverpool.

“Let’s keep on going. Every point is important for us. Unbeaten again, this is the most important thing and now we step up again,” said Hasenhüttl after that result.