‘The metro police, instead of protecting us, were telling us to run away’ – foreign national trader 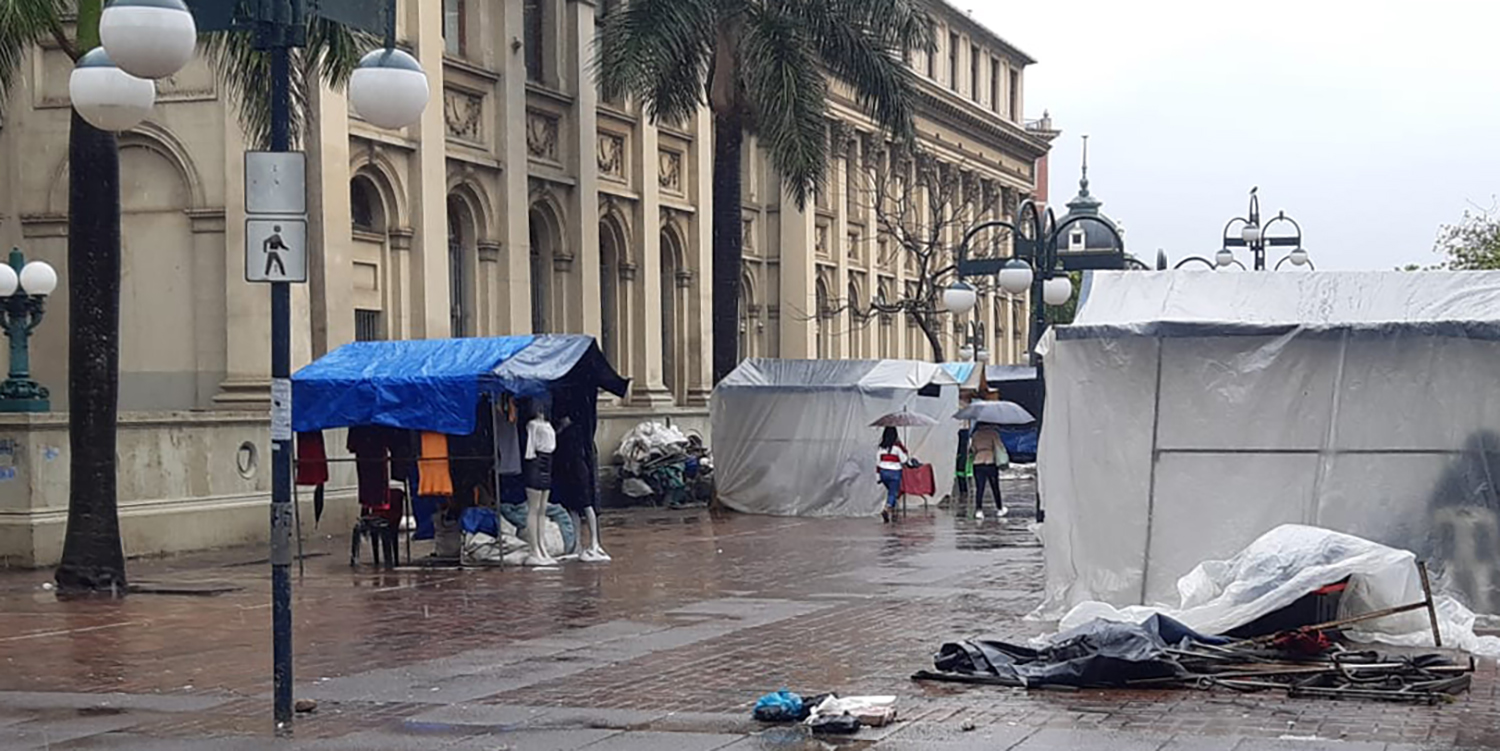 The Church Walk flea market in the Durban CBD in November, just after foreign nationals were chased from the area the first time by MK veterans. (Photo: Des Erasmus)

Documented foreign nationals trading legally in the Durban CBD have told Daily Maverick they are “baffled” by the inability of the ANC-run eThekwini municipality and law enforcement to assure their safety or the protection of their property at a popular market based literally metres from city hall.

Authorities have relegated the assaults on persons and property to “hooliganism” and “criminality”. Yet, those attacking and intimidating the traders were uttering clear xenophobic slurs, and there have been widespread media reports of MK veterans confirming they have targeted the market to “drive out foreigners”.

These attacks take place as the battered local economy is in desperate need of investment, and the city tries to market itself as a world-class destination.

Last week, foreign national traders were again attacked at the popular Church Walk flea market, situated next to the Workshop shopping centre and within spitting distance of city hall, despite police patrols in the area being increased.

Scores of foreign traders fled the market in November following violent attacks by the veterans, who told Daily Maverick at the time that the traders had been “chased away” because they were “illegal” and had to make space for local traders, who had been ordered to sell “traditional” wares by the veterans.

Last week’s attacks took place just one day after a meeting with eThekwini officials and police, where the traders were assured it was safe to return to the market.

A foreign national who regularly trades at the market and has a permit to do so told Daily Maverick his stall was torched during the attack, that he was stabbed, and alleges that a petrol bomb was thrown — while metro police looked on.

“We were told at a meeting with the mayor’s office that all of those who have a contract with the municipality must go back and open their stores because it won’t be a problem, there will be police guarding us,” said the man, who is known to Daily Maverick.

“On Friday [11 December] I opened my store. Maybe after 20 minutes, as I was waiting for customers, I saw a group coming from [the Steers side of the market]. I was sitting with two of my friends, talking and drinking coffee. I told [my friends] these guys are coming to us, let’s wait for them.

“They stopped in front of my shop, I saw one guy pull a knife, he told us to stop talking. I told him to not bring problems here, we are here to trade, we don’t have any problems. They said I was [a foreigner] and I must ‘just fucking go’. They started swearing.

“I just told them ‘guys, move from here,’ but they didn’t leave. They just started pulling the knife, they wanted to [stab us] they even [stabbed] me. Then they started with the petrol bomb. Then the police came, they told us to pack our bags and go. We told the police to just give us a chance to pack our backs and we would go.

“As we were walking away, the group also [attacked] people at the [other] end of the market. [The attackers] were stealing, and they started with the petrol bomb again, they burned it [sic], in front of the police, the police were standing there. We called the police, but they were taking a long time.”

The trader said he opened a case at Durban Central police station and was promised that a case number would be SMSed. “I still haven’t got it.”

Nigerian born Smith Enabebholo, who came to South Africa in 1995 as a refugee and is now a citizen, manages the Church Walk market. He told Daily Maverick that some of the traders that were attacked prior to the latest incident had also opened cases with the police and were still waiting for their case numbers.

“[The police] also haven’t followed up with arrests that have supposed to be followed up. We don’t know why the police are not doing their job on that.”

Enabebholo shared with Daily Maverick his version of the meeting with authorities the day prior to the attack.

“We were invited to a meeting with the mayor, unfortunately, he wasn’t there, but the city manager was there. The [provincial] commissioner of police was there, and a lot of stakeholders, including a representative from the United Nations was there to witness the meeting.

“After all of that [transpired], it was concluded that the traders who have lease agreements with the municipality must return back to trade, because [authorities] classified this whole issue as a criminal act, not xenophobia.

“[We were told that] the hooligans who were posing a threat to foreign traders must be arrested. We were given the assurance that there would be police visibility at the flea market and that traders must return and they would be safe.

“[They said that] the only assurance they wouldn’t be able to give us would be outside the flea market facility. I personally spoke to the police commissioner after the meeting, he told me I must inform my traders that they must return back to work, which I communicated to our traders via our WhatsApp group.”

Enabebholo said that “fortunately” there weren’t many traders willing to return to the market due to the constant threats and random acts of violence. As a result, most of them had moved outside of the CBD to run their small businesses.

“We are all baffled [by the latest attack] because after the meeting we had with the mayor’s office, we were assured we would be given protection. There were only about two metro police present, guarding the two markets. Traders are scared to return to work as government hasn’t fulfilled what they assured us at the meeting.

“The metro police, instead of protecting us, they were telling us to run away.”

A local trader based at the market, who spoke to Daily Maverick on condition he not be named, said the “problem” was “not about foreigners”.

“This is purely a criminal matter. As a result, SAPS and Metro Police are responsible for law enforcement and putting criminals behind bars. I propose that you touch base with these two to ascertain what is their comprehensive plan to nip this unlawful conduct in the bud,” he said.

“What we have noticed is that the MKMVA have done their own allocation and put their own people in there and are intimidating these [traders] who have been given permits by the council [to trade],” Sewpersad said.

“People who see anything must contact the police or us on 031 361 0000 (the eThekwini metro police emergency line), even if it is for intimidation. But they must have factual information and enough information for us to actually follow up immediately.”

There was also “good CCTV coverage of the Workshop area,” he said.

When asked by Daily Maverick why despite the patrols, Friday’s incident still took place, Sewpersad replied: “Well, these MK vets, sometimes you don’t know who they are. It is very difficult to establish who they are. I don’t know that they [threw a petrol bomb], I can’t confirm that, but SAPS should be able to.”

To date, the ANC has denied that MK veterans have been responsible for any attacks on foreign nationals, saying that anyone could admit to being a veteran for nefarious purposes. They have also strongly condemned any violence against foreign nationals.

Colonel Thembeka Mbele, one of the province’s police spokespersons, when asked about the latest incident, told Daily Maverick: “A case of public violence is being investigated by Durban Central SAPS after tents for street vendors were set alight by unknown suspects. The matter is still under investigation. There are police officers deployed in the Durban CBD. Constant patrols and operations are being conducted.”

Lennox Mabaso, the spokesperson for KwaZulu-Natal premier Sihle Zikalala, did not respond to Daily Maverick’s questions about the safety of foreign nationals in a province known for violent xenophobic flare-ups, despite having numerous days to do so. — Additional Reporting by Lwazi Hlangu. DM