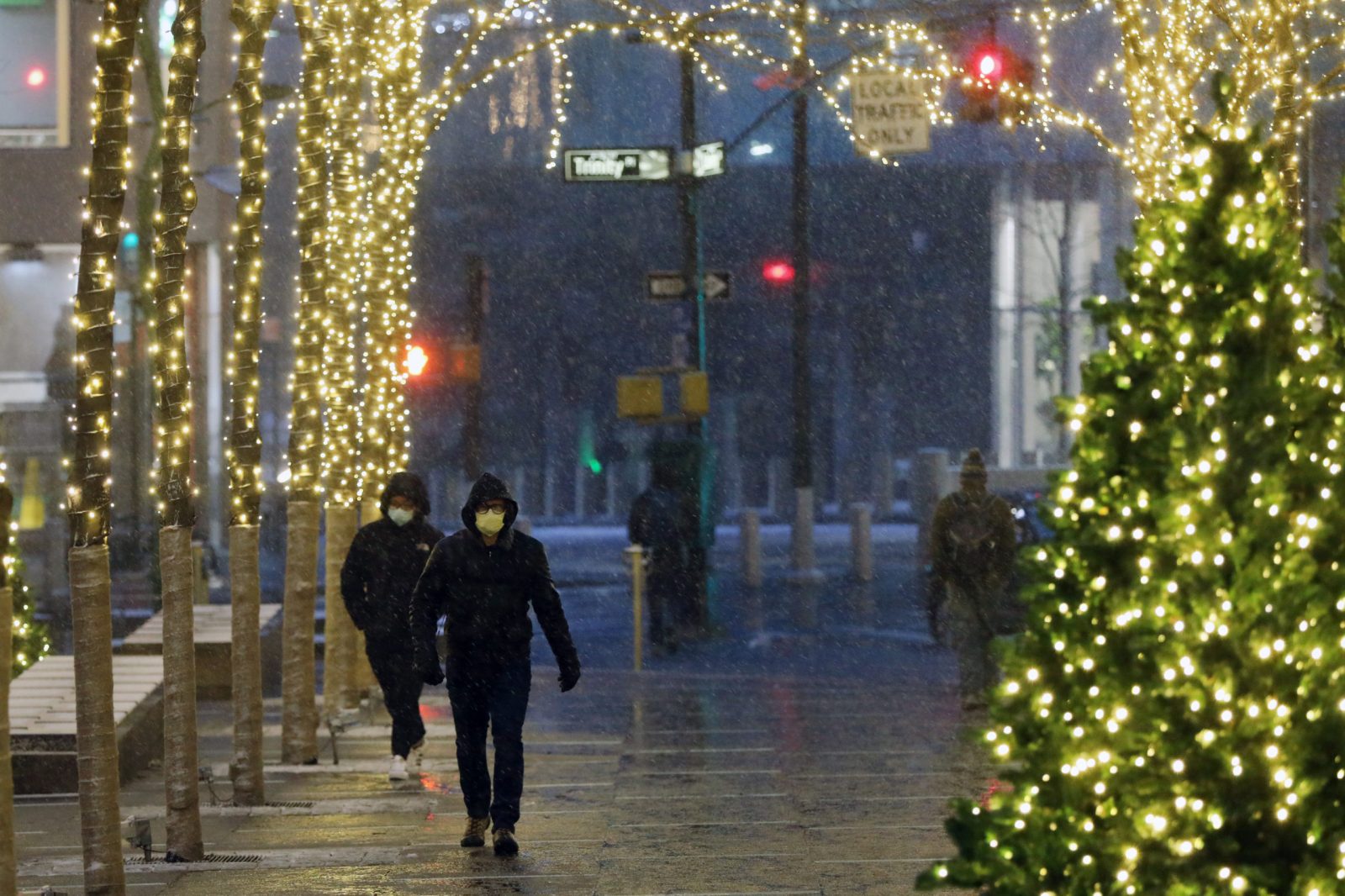 People walk through the blowing snow on December 16, 2020 in New York City, United States. New York City is expected to get between 10 inches and a foot of snow on Wednesday and Thursday in what is the first winter storm of the year. (Photo by Spencer Platt/Getty Images)

New York City restaurants suffered a double blow this week. First indoor dining was shut down on Monday in a bid to curb rising Covid-19 infections. Then, on Wednesday, a snowstorm hit the city and state, making outdoor dining the last thing on New Yorkers’ minds.

It’s slim pickings for New York restaurants as they can only operate around takeaway and pick-up orders. Announcing the closure of indoor dining on Monday, New York Governor Andrew Cuomo said: “We’re asking everyone to hold on.”

New York restaurants were allowed to open at 25% indoor capacity at the end of September. Daily Maverick spoke to some managers at the time and while two said they were looking forward to it and expecting an uptick in business and profits, at least one said he was nervous that it might not be enough.

“We were hoping that it wouldn’t go that far – shutting down indoor dining – but right now the governor is looking at metrics and he is following the science. But it’s devastating to the restaurateurs.”

Job losses as a result of the restriction were another concern.

“All the employees who are affected by that, they get laid off when this happens.. and they have no new stimulus plan… ”

Soon after Natt had spoken with Daily Maverick, snow started falling in New York and was expected to be up to half a metre deep in certain areas. The weather forecast was so bad that the governors of New York and New Jersey declared states of emergency and urged residents to stay off the roads.

New York had also been hoping for federal aid but states are the biggest losers after Congress looked set to sign an agreement on stimulus payouts on Wednesday afternoon.

The long back and forth on the way forward with the next round of stimulus cheques is all but over. A key feature of the new agreement is the give and take between the two parties leading to the omission of the Democrat-requested $160-billion state and local government aid package, and the Republicans putting aside their demand for state liability cover for Covid-19.

Republicans and Democrats have agreed on the importance of resolving the matter and have set $900-billion as a total, with direct payments to Americans of about $600 and to replace a $600-per-week unemployment benefit with $300 per week. The postal service is set to receive a $10-billion bailout and funds are being directed towards struggling businesses and people unable to pay rent.

Unemployment runs out on 26 December, so there is a lot of pressure for decisions to be made and for money to reach ordinary Americans. The last (and first) stimulus cheques went out in March when single payments of $1,200 were made – besides the weekly $600 unemployment cheques that were paid out until the summer.

Senate majority leader Mitch McConnell is reported to have pointed out to Republicans that concluding a stimulus deal that ensures direct payments to citizens before the January runoffs could help the party hang onto its Senate majority. McConnell apparently also told senators to be prepared to work through the weekend as lawmakers and aides finalise the agreement.

They still have to decide how long the new weekly unemployment benefits would be paid out for.

The Federal Reserve (the Fed) held its last policy meeting for 2020 on Wednesday, keeping the interest rate unchanged (near zero, which will probably stay that way until 2022) and pledging to continue to support the country’s economy.

Fed chairperson Jerome Powell said the economy needs to be supported because it will take time for labour market conditions to return to what they were before the pandemic. DM

An Wentzel is Night Editor and specialist reporter for Daily Maverick. She went to the US to visit family as the pandemic struck and is marooned in the land of the “free”.