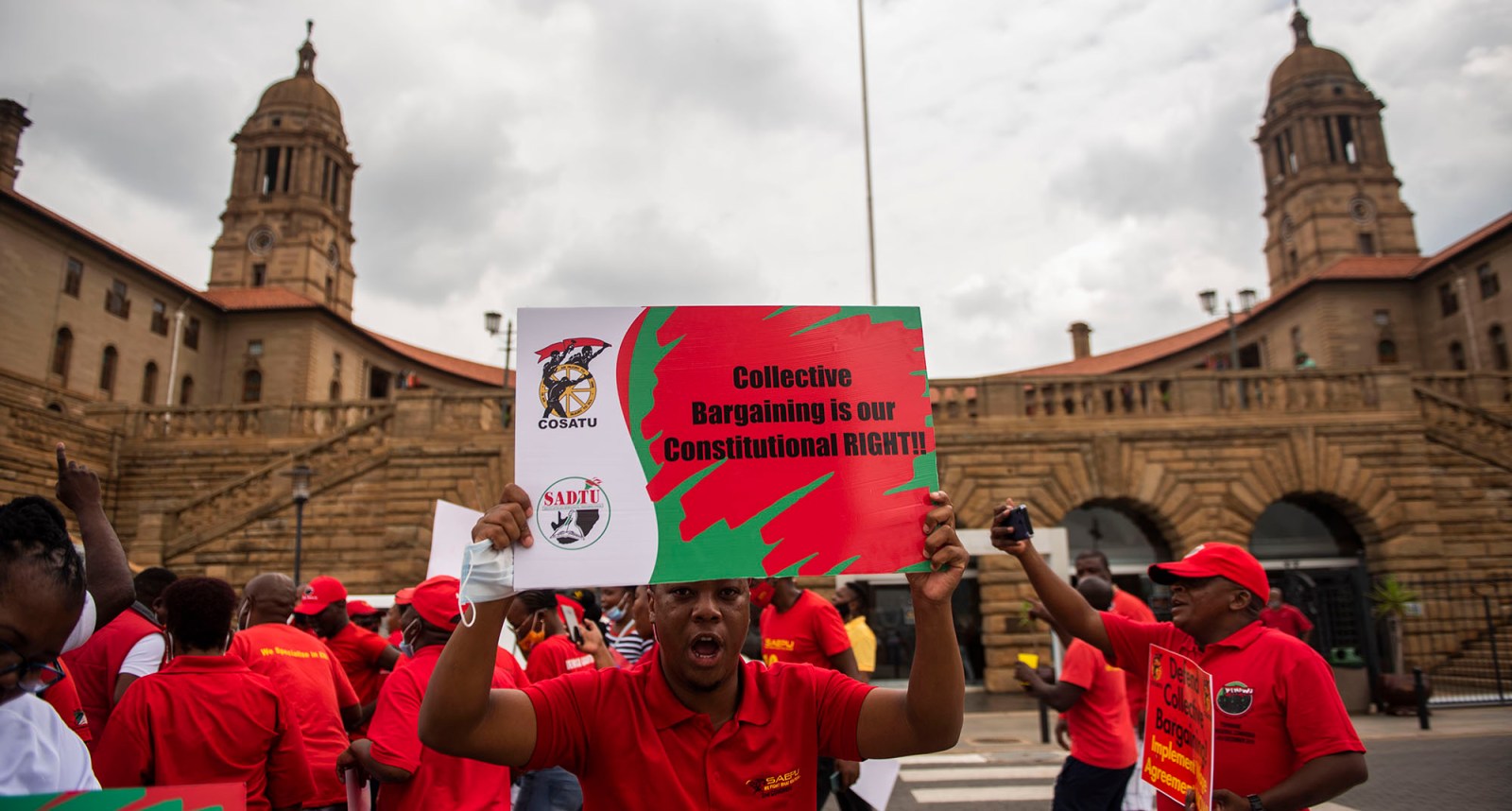 Members of Cosatu unions stage a sit-in at the Union Buildings in Pretoria on 4 December 2020. (Photo: Gallo Images / Alet Pretorius)

When the Presidency and Cosatu met, it wasn’t a cosy tête-à-tête, but to discuss various governance lemons. The labour federation seems low on patience, saying it will follow up in January 2021, but the ministerial performance agreements seem fuzzy at best, and lack quality controls.

Cosatu wanted to meet President Cyril Ramaphosa over issues formally dating back to the 7 October 2020 general strike memorandum on job losses, corruption and socioeconomic issues handed over at the Union Buildings. But many go back longer.

For example, Cosatu’s ire about the still outstanding Department of Public Service and Administration circular – effectively, an administrative measure – to formally make it possible for civil servants to qualify to take the parental and adoption leave, since 1 January 2020 under the 2018 Labour Laws Amendment Act. Apparently, no such circular, no such parental and adoptive leave for civil servants.

“We don’t negotiate the implementation of laws. They are binding,” Cosatu parliamentary liaison Matthew Parks told Daily Maverick. “We are going to enter a constitutional crisis if laws are not implemented, or not signed by the president.”

That would also include the Political Party Funding Act, which remains unenforced over the technicality of the multiparty democracy fund implementation date.

It remains unclear whether anything concrete was proffered when Cosatu, again, raised its opposition to the public servants wage freeze – the Cabinet split on this measure – that public sector unions unsuccessfully challenged in court.

Concerns remained over the lack of a public transport plan with firm implementation timeframes and, it’s understood, none were given at the 11 December meeting. Some reassurance was provided regarding rebuilding the Passenger Rail Agency of South Africa (Prasa).

Transport Minister Fikile Mbalula’s performance agreement talks of getting municipalities to run bus rapid transport systems for 20 hours daily and to have 3,600 new coaches (“300 configured trains”), but nothing on taxis.

Despite repeated assurances by the government and the governing ANC of their commitment to fight corruption, the Presidency-Cabinet ministers-Cosatu meeting seemed to underscore official dilly-dallying. That included Cosatu’s proposals of, for example, extending the ban on doing business with the state from public servants and elected public office-bearers to other politicians.

The government has remained too soft, said Parks. “They’ve been ducking and diving – because some individual ministers have conflicts of interests.”

Limitations on immediate family members not doing business with the state or even cooling-off periods are not out of the ordinary. It is understood that discussions around such limitations as part of a national anti-corruption drive also have been discussed at the National Economic Development and Labour Council (Nedlac) between the government, business and labour.

A statement from the Presidency following the 11 December meeting indicated appreciation for the “forthright engagement” by Cosatu.

“The meeting agreed that government and the trade union federation will continue engagement on these issues. The meeting also resolved that a platform would be created for the parties to hold high-level discussions twice a year that would include, but not be limited to, matters of labour relations.”

That would be in addition to Nedlac engagements that also include business and the Presidential Working Committee, while at a political level the ANC, Cosatu and the SA Communist Party interact at various alliance meetings.

“The meeting resolved that there needed to be more in-depth and frequent engagement between government and the federation on workplace issues as well as issues of broader interest in society. On some of the issues you have named, Cosatu and departments were mandated to continue discussion.”

The labour federation played a key role in shifting the political landscape through its support of Ramaphosa in the ANC presidency contest leading to the 2017 Nasrec conference.

Ending corruption has been a central point for the labour federation, which has started to bluntly link corruption, including the personal protective equipment (PPE) tender scandal, to the loss of benefit to ordinary South Africans – from stable support for the unemployed – including training – or small businesses, to quality public healthcare and education.

In 2020 Cosatu affiliates’ members were hard hit by South Africa’s economic recession and general lacklustre performance, but also by the Covid-19 hard lockdown furloughs and 2.2 million job losses, many of which are expected to be permanent.

“We’ve given notice to government. They have to give us action plans with implementation dates. We will follow up in January,” said Parks.

But questions hang over governance. In fact, many of the ministerial performance agreements raise further questions, including about a tendency of quantity over quality.

All agreements include the elimination of fruitless and wasteful expenditure, and a 75% reduction of irregular expenditure from 2019 levels, alongside 100% accountability to Parliament and standard items like performance agreements with directors-general.

Under the heading “Economic Transformation”, the target reads: “Unemployment reduced to 20-24% with 2 million new jobs especially for youth; economic growth of 2-3% and growth in levels of investment to 23% of GDP.”

On the energy front, the ministerial performance agreement with Mineral Resources and Energy Minister Gwede Mantashe must decide on a 2,500MW nuclear capacity by 2024 and the feasibility of a new oil refinery.

That’s almost halving the 40.1% unemployment on the expanded definition including those too discouraged to even look for work. The figure is 30.8% on the narrow definition of actively seeking work but not having found a job. Language is important because a job is different from a job opportunity, or temporary jobs, provided in one of the public works employment programmes.

It’s unclear exactly what this job creation/economic transformation target would mean, qualitatively speaking. And the absence of qualitative controls across the performance agreements – it’s all about the numbers – must raise questions.

For example, Agriculture and Land Reform Minister Thoko Didiza must “assess and release” nine million hectares of state land for agriculture and agro-processing as per the Master Plan, and support 20 new agribusinesses.

But the performance indicators do not have quality checks like sustainability of businesses and of agricultural livelihoods. It would be quite possible that as long as there’s a list of 20 such businesses it’s tick, tick, tick for performance achieved, even if none of these businesses are actually viable.

While localisation is the policy aimed at boosting domestic manufacturing, and thus South Africa’s economic growth, again the ministerial performance agreement lacks quality controls. Actually, all that’s needed to make the target would be a list of no less than 20 products, a report and some minutes of a Nedlac meeting where Patel introduced the list.

On the energy front, the ministerial performance agreement with Mineral Resources and Energy Minister Gwede Mantashe must decide on a 2,500MW nuclear capacity by 2024 and the feasibility of a new oil refinery.

Curiously, Mantashe gets the responsibility for the unbundling of Eskom that has now moved from the Department of Public Enterprises, under whose portfolio the troubled power utility falls.

Mantashe’s performance agreement states he’s responsible for the transmissions company by 2024, to “provide legislative and regulatory framework for a restructured electricity supply industry”.

Under the Eskom roadmap released in October 2019 by Public Enterprises Minister Pravin Gordhan, the deadline for the functional separation was the end of March 2020, shifted to December 2021 by Eskom in mid-2020.

The ministerial performance agreements include other examples of such policy twists and disjuncts that undermine governance.

And it is those governance disconnects that Cosatu – and others – must heed, and challenge. DM