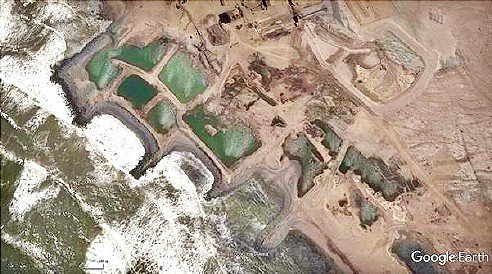 The Green Scorpions are involved in a criminal investigation into the construction and impact of cofferdams on the Namaqualand coast.

Sediment from cofferdams built by diamond mining companies on the West Coast is smothering the seabed and damaging the inshore reef systems, perhaps permanently, diamond divers have warned.

Alexander Bay veteran diver Kobus Kriel said the sea was so dark with sediment “we can’t even dive with lights”.

Kriel has submitted an affidavit to the Green Scorpions, who are involved in a criminal investigation into the construction and impact of the cofferdams being used to mine diamonds near the mouth of the Orange River. The probe is at an “advanced stage”, according to the Department of Environment, Forestry and Fisheries.

In addition to the criminal probe, a “pre-compliance notice” was issued on 2 November, following investigations by the department’s Green Scorpions environmental management inspectors, with the recipient being given an opportunity to respond to various allegations about the illegality of the cofferdams. The department did not name the recipient.

The joint venture, in which Alexkor holds a 51% interest, employs more than 100 mostly small private contractors to mine diamonds in five huge blocks extending roughly between the mouth of the Orange (Gariep) River in the north and close to the little mining town of Kleinzee in the south.

Compliance notices are issued in terms of the National Environmental Management Act (NEMA) and are aimed at making offenders comply with environmental legislation or with the conditions of their permits, authorisations or other regulatory instruments.

The response by the “recipient” in the cofferdam investigation was due by the end of the first week of December 2020, the department’s chief director of communication Albi Modise told GroundUp in response to questions. “A final decision on the way forward will be made after the contents of this representation have been considered,” he said.

Referring to the criminal investigation, Modise said that once the docket had been finalised, it would be submitted to the Director of Public Prosecutions for a decision on whether to prosecute.

Cofferdams, used along Namaqualand’s “diamond coast” since the 1950s, are temporary seawalls constructed to hold back the ocean from the intertidal beach area and shallow surf zones while miners access the diamond-bearing gravels under the beach.

There have been complaints about their environmental and socio-economic impact for years, including from diamond divers.

One of the most vociferous critics of the cofferdam construction is Alexander Bay diamond diver Gavin Craythorne, who has submitted an affidavit to the Green Scorpions.

In his affidavit, Craythorne describes himself as a veteran diamond diver with more than 35 years of experience covering operations, engineering, and consulting. “I have lived in Alexander Bay as a permanent resident since 1999 and made significant technical economic and advocacy contributions to the local diamond diving industry and the operations of Alexkor.”

He states that cofferdam mining using seawalls constructed of rock, as opposed to beach sand, started at Alexkor in about 2012. This was despite recommendations that only locally mined sand be allowed for the construction of dam walls and explicitly prohibiting rock material.

Craythorne says not only are rocks now being used to build the seawalls but hundreds of tons of dust — which is poisonous to plant life — are also now part of the mix.

“… this toxic quarry dust that is indiscriminately dumped with the seawall rocks into the sea will predictably generate large plumes of regional sea pollution resulting in an environmental footprint several orders of magnitude greater than the cofferdams themselves … The resultant widespread smothering of the seabed and increased turbidity of the water column have a highly detrimental impact on regional shallow water reef systems and Namaqualand’s unique, world-renowned local artisanal diamond diving industry,” he says.

In his affidavit, Kriel states that he has been diving for diamonds for the past ten years in the area.

“During a year we could mine approximately thirty to forty days, where sea conditions were fair and visibility good. This continued up to approximately September 2017, when the construction of the cofferdams started. Since then, when the sea conditions did allow us to mine in Block 60, there has been no visibility,” Kriel states in his affidavit. “We have also lost countless years of mining areas as most areas are now buried under large amounts of rock and sediment left behind by dumping materials into the ocean.

“I believe the damage that has been done will never be able to be repaired either by rehabilitation, by machines and much less by the action of the waves.”

Kriel told GroundUp that his business had been “brought to its knees” because of sediment from cofferdams in the mining area where he operates. The seawater, he said “is so dark we can’t even dive with lights”.

Alexkor and the Alexkor Richtersveld Mining Company Pooling and Sharing Joint Venture did not respond to emailed questions from GroundUp. DM