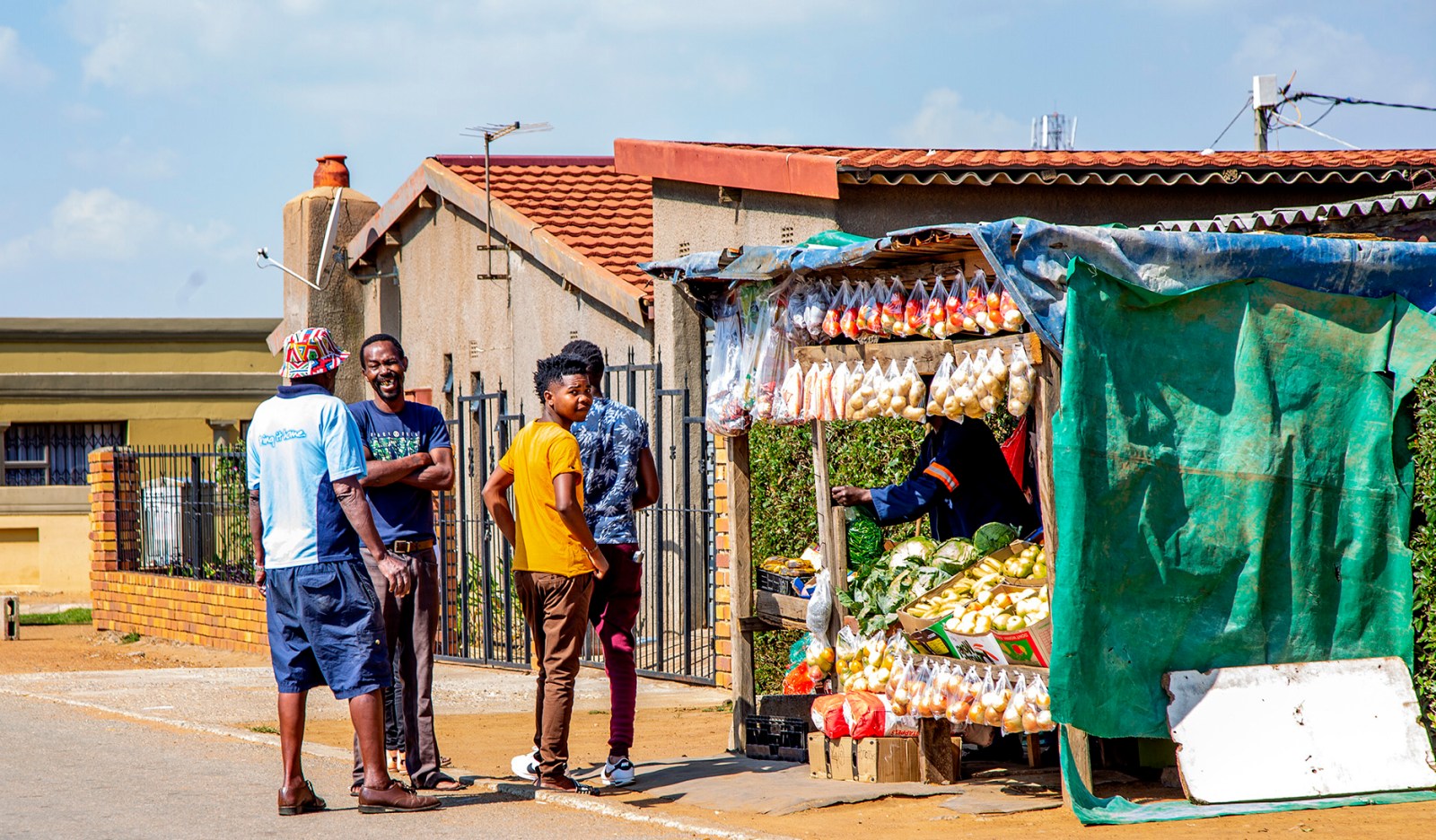 EKURHULENI, SOUTH AFRICA - APRIL 20: A general view of a spaza shop in Duduza during national lockdown on April 20, 2020 in Ekurhuleni, South Africa. According to media reports, grocery stores which include corner shops, spaza shops and fruit and vegetable stores are permitted to operate during the lockdown period – irrespective of the nationality of the owners. (Photo by Gallo Images/OJ Koloti)

Notwithstanding the fact that the South African Constitution, like the Freedom Charter, says “South Africa belongs to all who live in it, united in our diversity” – clearly affording human rights protections to “everyone” – xenophobic violence and sentiment have haunted the country’s constitutional democracy since inception.

The perception that non-citizens “do not belong” in South Africa or are “stealing” jobs from the country’s citizenry challenges constitutional democracy at its core. Human Rights Watch’s recent report, They’ve Robbed Me of My Life, which documents xenophobic violence in 2019, reveals that such violence was often fuelled by South African citizens’ “blaming” non-citizens for “unemployment, crime [and] neglect by the government, among other things”.

Xenophobic sentiment is widespread and not merely errant prejudice in some communities. As an incisive editorial in New Frame notes, both factions within the ruling ANC have “chosen to incite xenophobia to sustain consent for their authority”. In several instances government officials have tried to mask their failure to eliminate poverty and eradicate inequality by adopting xenophobic rhetoric, scapegoating African non-citizens, and inciting xenophobic violence. In provinces where it has governed, the official opposition DA has also often adopted the same tack, with its leaders variously spreading misinformation and prejudice about non-citizens and even South African migrants.

Against this backdrop New Frame’s editorial observes that the problem is severe enough that “banal rhetoric from liberal counter-elites about human rights will not solve this crisis”. While this may be true, the rule of law and human rights-based condemnations of xenophobia are necessary for at least two key reasons.

First, xenophobic sentiment is often masked in the liberal language of the rule of law and human rights. Political elites commonly use the “illegality” or “criminality” of non-citizens as a veil for inciting xenophobia. Therefore, contesting their false claims precisely with “banal” human rights arguments is important.

Second, there is an emerging trend to garner support for xenophobic prejudice through the language of human rights and affirmative action. This is essentially what the Gauteng Township Economic Development Bill does. As we will show, this trend needs addressing on its own terms.

ICJ animation on Township Development bill from ICJ on Vimeo.

None of this discounts the core conclusions of  the New Frame editorial: The ultimate solution will not be found in such elite discussions, but in popular opposition and organising against xenophobia, thereby reducing the political capital and appeal of such poisonous rhetoric.

Xenophobia, the rule of law and human rights

Xenophobic sentiment in South Africa often revolves around two key, sometimes unarticulated, assumptions, both of which are false despite being accepted as universal truths.

The first is that one may accurately and lawfully identify people as “legal” or “illegal”, with “illegal” meaning “foreigner” and “legal” being “South African”. In this view, legality is premised on the notion of citizenship, with citizens incorrectly understood to be the only people with the right to work and non-citizens unlawfully excluded by local governments from obtaining licences or permissions to to work.

The fallacy is that no one may be identified as “illegal” or “legal” because, as the courts have emphatically confirmed, “human dignity has no nationality”. It is sheer nonsense to qualify fellow human beings as “illegal”; we are all equal before the law and enjoy equal protection of the law without discrimination. This is why the overwhelming majority of human rights protections in international and national law are available to everyone, as the Constitutional Court has confirmed. If a local government bylaw or a national law prohibits a non-citizen from making a living, it is that prohibition that is illegal. The Supreme Court of Appeal has made this abundantly clear:

“[I]f, because of circumstances, a refugee or asylum seeker is unable to obtain wage-earning employment and is on the brink of starvation, which brings with it humiliation and degradation, and that person can only sustain him- or herself by engaging in trade, that such a person ought to be able to rely on the constitutional right to dignity in order to advance a case for the granting of a license to trade as aforesaid. In fact, in those circumstances it would be the very antithesis of the very enlightened rights culture proclaimed by our Constitution for us…  to condemn the [refugees and asylum seekers] to a life of humiliation and degradation. That I do not believe our Constitution ought to countenance.”

Moreover, many non-citizens living in South Africa – as refugees or asylum seekers – are lawfully present and entitled to work under South African law in line with the country’s commitments to the Refugee Convention.

The second false assumption is that there is a zero-sum game when it comes to employment of citizens and non-citizens. In the populist narrative, when a “foreigner” has a job this must be at the expense of a South African citizen. This view is bolstered by the Gauteng government’s explanation for the need for the Bill: “The absence of [legal] enforcement has led to the flooding of township market by foreign-owned spaza shops and the mega shopping malls, both of which have led to the significant decline if not collapse of the township businesses owned by local business people.”

But the available evidence does not support this assertion in the context of Gauteng or elsewhere. For example, in a detailed study the World Bank says “immigrants in South Africa had a positive impact on employment and wages for locals”. Similarly, a joint report of the International Labour Organisation and the Organisation for Economic Cooperation and Development found that “the presence of new immigrants, who have been in South Africa for fewer than 10 years, appears to increase both the employment rate and the incomes of South African-born workers”.

Despite this evidence it remains remarkably easy for political elites to incite xenophobic sentiment and garner significant support for it. The Bill, an explicit attempt to exclude non-citizens from economic activity to purportedly benefit South African citizens, is a clear case of this type of political manoeuvring.

Local and international civil society organisations have repeatedly made the point that the Bill, wittingly or not, risks fanning the flames of xenophobic violence. The political momentum behind it seems unaffected by these criticisms, with the Parliamentary Portfolio Committee on Small Business Development calling it a “move in the right direction” and the National Executive appearing to support legislation of this nature.

The Bill exposes a potentially even deeper concern about its ideological basis. It explicitly defines “black people” and “black person” (the intended beneficiaries of the Bill) so as to explicitly include only African, Indian and coloured South African citizens by birth, descent and naturalisation. In doing so it makes it clear that its aim is not only to strip African non-citizens of their human rights, but also of their blackness. It is difficult to imagine a piece of legislation more inconsistent with and invidious to the spirit and the letter of the South African Constitution and the Pan-Africanism that Ramaphosa purports to support as chairperson of the African Union.

In 2019, African Commission on Human and People’s Rights chairperson Solomon Ayele Dersso wrote to Ramaphosa condemning attacks targeted at “non-nationals, that are mostly of African origin” in South Africa. He urged South African officials to “restrain from statements that fuel division and incite violence against non-nationals” and to “facilitate the establishment of the requisite social and economic conditions and public consciousness that promote tolerance, mutual respect and harmony in local communities where non-nationals reside and try to make a living”. The Bill is a move in the opposite direction and therefore a direct slight on the commission.

Kaajal Ramjathan-Keogh, Tim Fish Hodgson and Tanveer Jeeva are with the Africa Regional Programme at the International Commission of Jurists.