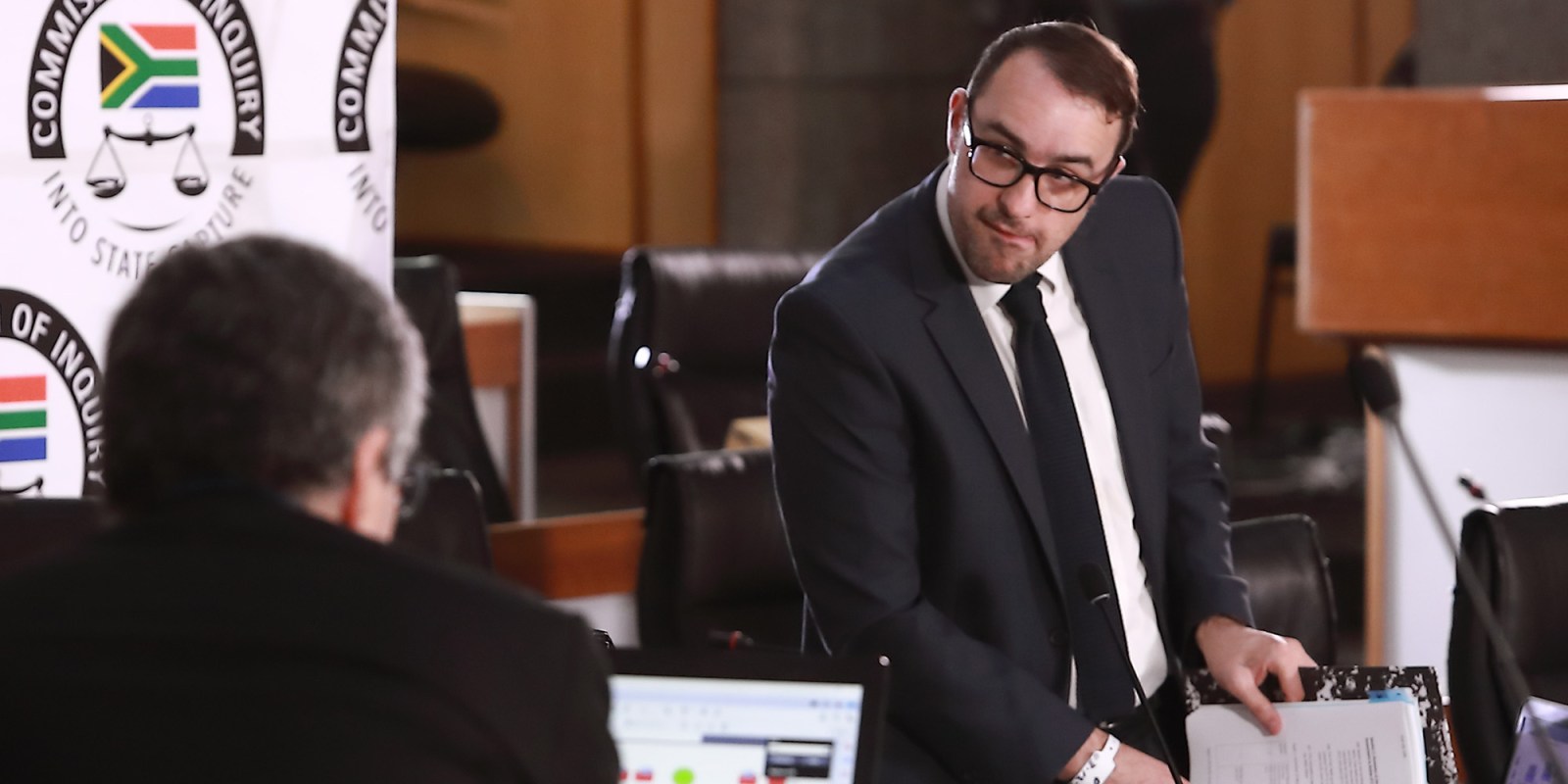 Paul Holden, who is director of investigations at London-based Shadow World Investigations, showed how R280,202,652 paid by the Free State provincial government into the Guptas’ Estina account was circulated through various Gupta-controlled companies and bank accounts and paid into the ill-fated dairy project. (Photo: Gallo Images / Fani Mahuntsi)

The flow of Estina Dairy project money between various South African and offshore Gupta companies with at least 17 local and international bank accounts between them was presented to the Zondo commission on Thursday, 3 December.

The Estina Dairy project was created as a cash cow for the Gupta brothers while Mosebenzi Zwane was agriculture MEC under the then Free State premier, Ace Magashule.

No questions asked as millions flowed to Estina dairy project

Presenting the evidence, Paul Holden, who is director of investigations at London-based Shadow World Investigations, showed how R280,202,652 paid by the Free State provincial government into the Guptas’ Estina account was circulated through various Gupta-controlled companies and bank accounts and paid into the ill-fated dairy project to make it appear there was a total of R880,345,365.83 moving through the account during the life of the project from 2012 to 2016.

This money laundering practice, known as “round-tripping”, according to Holden, was in order to make it appear an additional R600,142,713 had been invested in the project, when in reality, almost all the money originated from the provincial government.

Holden said only 3.1% or less of the R880-million that flowed into the Estina account was from funds other than the Free State provincial coffers.

He said when the Asset Forfeiture Unit (AFU) applied to seize the Estina Dairy project’s assets, the appearance of R600-million in separate funds was used as a defence, in that it was argued the assets were not derived solely from the Free State provincial government’s funds. The round-tripped money was also a means to claim additional investment in the Estina Dairy project.

The details of how money was laundered through at least six companies, including offshore companies, each of which had multiple accounts, using banks including First National Bank, State Bank India, Stanlib, Standard Chartered Bank, and the Bank of Baroda in particular, were derived from the trove of emails known as the #GuptaLeaks.

Attached to some of the emails retrieved were spreadsheets of internal ledgers revealing the money laundering practices of “round-tripping”, “smurfing” (paying money out in smaller amounts to other businesses within the same ownership network), and “cash firebreaks” (the withdrawal of cash from one account which is then deposited into another account within the network).

The movement of money, which otherwise would have been almost invisible from external audits of the companies, was corroborated by Reserve Bank records of cross-border payments with Dubai, which were provided to the commission by the National Prosecuting Authority.

In order to launder funds, the Gupta enterprise set up an intricate web of companies registered in the name of Gupta relatives and associates, with each company opening numerous bank accounts.

They held various companies for the Guptas, through which the money was laundered. These include UAE-registered Accurate Investments, Aerohaven Trading, the offshore Fidelity Enterprises, which held shares in Tegeta Holdings and Tegeta Pty Ltd, UAE-based Gateway Limited, Dubai-based Global Corporation LLC, Linkway Trading, Oakbay and Vargafield.

Some of these, such as Accurate Investments, were shell companies without assets, expenses or premises.

Holden, led by advocate Matthew Chaskalson, showed how of the R280-million paid to the Estina Dairy account (with an additional R7-million accruing through interest earned), only R21.7-million was paid out for costs of running the dairy or for salaries. The rest, with the exception of R34.5-million paid to SARS for “VAT issues”, ended up in Gupta offshore accounts after being “washed three times in a circle” through about 17 bank accounts in three different currencies.

Much of the day was spent detailing the various persons, companies, and bank accounts involved, as well as leading Deputy Judge President Raymond Zondo through the spreadsheets and visualisations Holden had compiled using the internal ledgers from the Gupta Leaks emails. Time was also spent providing the commission with bank account entries corroborating the information contained in the Gupta ledgers.

The commission was told how provincial government money for the Estina Dairy ended up paying for the Gupta wedding at Sun City. Holden traced how just under $3-million ($2,999,975) was paid from Estina Pty Ltd to Gateway Limited in Dubai on 5 September 2013. Four days later, on 9 September, Gateway Limited paid $1.4-million to Accurate Investments, which on the same day placed $1.3-million in Linkway Trading’s account. The cost of the Sun City wedding, an amount of R30-million, was then invoiced against the Linkway Trading account. This was all South African taxpayers’ money.

More details on the laundering of Estina Dairy project money is expected to be heard at the commission on Friday, 4 December. DM