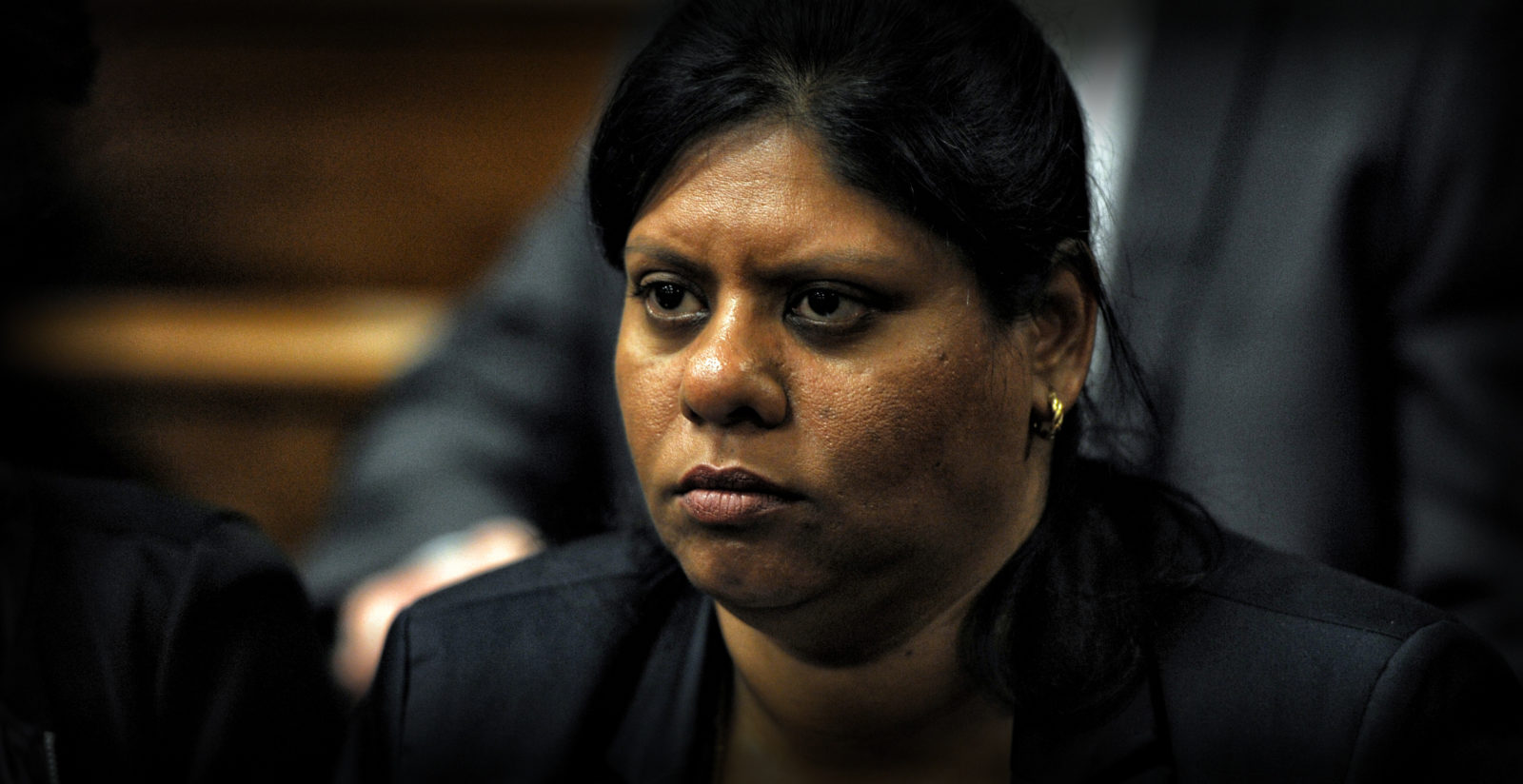 She was top management, juggled paperwork for everything from the acquisition of coal mines, insurance for a jet and a million-dollar Dubai/New York transfer right down to event décor and the Merlot and Sauvignon Blanc orders. Proxy, PA or CEO, Ronica Ragavan is aide extraordinaire, a Gupta lieutenant like no other.

Her name, face and signature feature prominently across battlefield central in the Gupta family’s State Capture woes. The men have long bailed and today, she holds what’s left of the family’s gutted empire in her hands: She has been their voice, their liaison between lawyers, auditors and bankers, their unofficial chargé d’affaires.

“I am Ronica Ragavan, CEO of the various Gupta companies and accused number 10 in the Estina case.”

This, it is said, was how Gupta Inc’s Madam Fix-It introduced herself at an April 2018 meeting of interested parties when eight of their companies went into business rescue earlier in 2018.

At that moment, she let everyone know who was in charge, a tone apparently reserved for moments when none of the three “Sirs” – brothers, Ajay, Atul and Rajesh – was in sight.

“Ooh, don’t talk to me about that woman. Let’s just say, we’ll never be best friends,” came one of the responses to Daily Maverick’s attempt to strip away some of the layers behind the most important woman in the Gupta network.

Ragavan could easily work a 16-hour day and handle the Guptas’ petty admin with as much commitment as she did their multibillion-rand crises across mining, banking and tax.

“She’s an oddball man, an enigma,” said a former lower-level staffer who described her as having been kinda good at keeping to herself in her offices at either Oakbay or Sahara.

Others agreed, but having had a slightly different view, commented that the real Ragavan would surface when the “bitch” hit the boardroom.

This unkind description was used by several of the dozen-odd former acquaintances or professional services providers who agreed to talk about her on condition of anonymity. The mother of one was unresponsive to repeated interview requests.

“She seemed totally subservient to the brothers, more specifically Atul. But, she was an attack dog to all else. Never questioned anything they said.”

Although regarded as important by former staff who spoke to Daily Maverick, Ragavan was also described as a “glorified secretary”, though not known for her “corporate” dress sense.

“There were no Gucci bags or high heels. She looked like us, like she shopped at Truworths and Milady’s.”

She would walk into meetings all bark, dishing out instructions, but couldn’t make a single decision on her own.

“Around the brothers, she was almost invisible, silent and compliant.

“I can’t recall a single day where she would lunch with the suits at ANN7. I don’t think it’s that she was not invited, more like she believed it was not her place to dine among them.”

But everyone knew she was important enough to command respect, some say, out of fear.

“We would tread on eggshells around her. She used to say ‘if you can’t do it, tell me and I’ll find someone who f****n can’.”

But by the same token Ragavan would walk into a meeting room to ensure Ajay Gupta was comfortable, even if just to fill up his water glass.

Her power trip, former colleagues say, intensified once she was anointed with the title of acting CEO of the Gupta empire’s holding company, Oakbay Resources, in 2016.

This was after they were plunged into commercial impotence (her words) when the Guptas extricated their businesses on paper following a decision by South African banks to terminate their accounts and the withdrawal of their JSE sponsor and auditors, KPMG.

No job for the faint-hearted

Affidavits filed in her name across complex legal proceedings put her at the centre of the Guptas fight-back campaign, waged no doubt with a phone call or email carrying instructions from beyond SA shores. Those include:

Before these exceptionally trying times, this super CEO also handled a Bank of Baroda home loan application for one of the Zuma wives, dealt with payment queries for a watchman at L35, the family’s new Dubai mansion, travel and transfer arrangements for Gupta visitors to Plettenberg Bay, float for aircraft crew, even orders for a year-end function at their Constantia mansion.

Her list of to-dos is really endless, if not insane. Whatever drives this level of loyalty and unthinkable work ethic, it does not seem to be money.

In the #GuptaLeaks, the salary details for Ragavan, employee code 401051, is blank.

Travel records in that treasure trove of leaked internal emails only rarely put her on a business class flight.

She generally flew coach unless she was booked on the family’s private jet, ZS-Oak, for quick trips to India or Dubai.

And, unlike many of the other Gupta lieutenants, there is little sign of personal excess around this KwaZulu Natal native.

It’s highly possible, reckons one former insider, that Ragavan sold out for nothing but a monthly pay cheque and quite a bit of blind loyalty.

Court filings by the Asset Forfeiture Unit when it obtained a preservation order for Gupta assets, state she was in charge of companies holding more than R100-million in assets including 73 properties (also their Saxonwold compound), 31 vehicles, among them, a Rolls Royce, Lamborghini Gallardo and a Porsche Cayenne.

Yet, those same documents show, she had nothing but an R22,000 Toyota Tazz and a Ford Fiesta to her name at the time.

That, and a small face brick townhouse in Pretoria, bought for little over R600,000 in 2004, according to a Deeds Office search.

This striking anomaly, AFU investigators billed as nothing but a corporate veil over the Gupta largesse – it also serves to reinforce the notion that she is but a proxy for the Guptas.

Even as the sole director of one of their companies, Aerohaven, Ragavan had to ask permission from one of the Gupta brothers to put pen to paper. 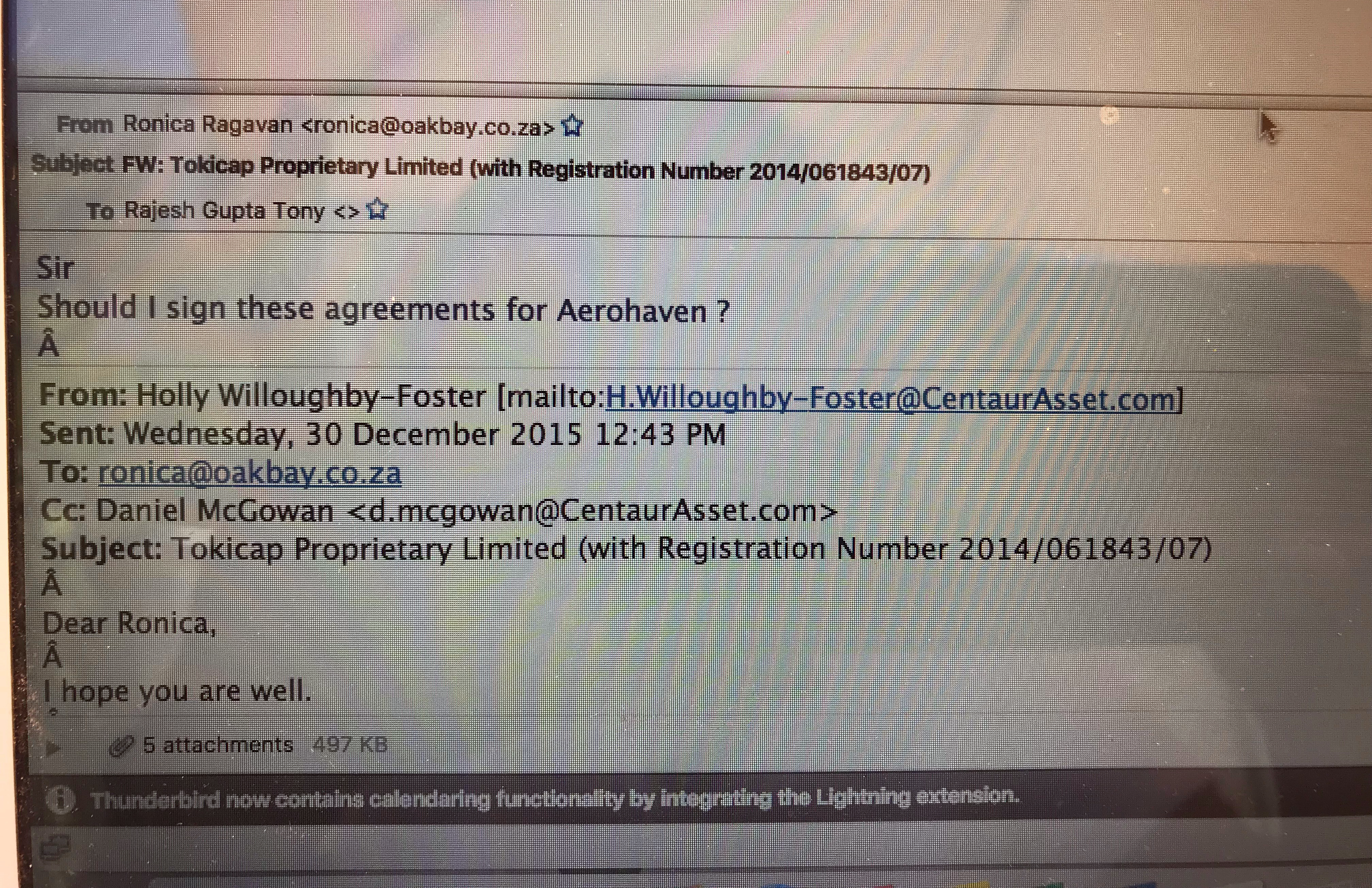 After some years of comfort in a Gupta-owned mansion in the gated enclave of Midstream Estate, Ragavan recently started listing the 146 square metre Pretoria townhouse as her home address again.

In 2015 she served as a director of multiple Gupta-owned companies yet documents seen by Daily Maverick show that she earned just over R768,000 that year – that’s a take-home pay cheque of roughly R45,000 a month, give or take a couple of deductions.

In service of the Guptas: 18 years and counting

The exact date of her foray into the Gupta empire is hard to pin down but indications are that it was at least 18 years ago.

In January 2006 Sahara issued a press release announcing staff movements, it included her appointment as a director within the group. Until then, still going by her maiden name of Govender, she was supposedly a finance manager and had been with Sahara for six years.

“My appointment only goes to show that hard work and loyalty is rewarded at Sahara,” Ragavan was quoted at the time.

Yet those who encountered her at Saxonwold or elsewhere in the business two years later, around 2008, still remember her as a “runner” back then.

“She would fix things, arrange flights, organise bodyguards. She could make you a lovely cup of tea,” said one of the Guptas’ earlier business associates.

Documents contained in the #Guptaleaks bill Ragavan as “top management,” reporting directly to Gupta brother, Atul, who is also among her handful of Facebook friends.

Daily Maverick attempted to secure an interview with her but messages to her cell number, one she has used since her early years with the Guptas, went unacknowledged.

Unexplained, that little inspirational message does sound like someone with an insane appetite and ability for crisis management.

With her bosses now confined to air-conditioned living in the Saudi heat – Ragavan, surrounded by a small army of lawyers, holds the fort at the Guptas’ new down-graded offices in Midrand.

And, until last week, also the National Prosecuting Authority. She was one of the accused in the Estina dairy farm scandal, facing charges of fraud, theft and money laundering until those were provisionally withdrawn by authorities.

There is no question that her name will feature prominently at the State Capture inquiry before Justice Raymond Zondo where the multi-billion-rand worth of deals between parastatals, Gupta companies and their associates will come under scrutiny.

Of the billions of rand allegedly accrued through the family’s reign over South Africa’s state-owned companies, much of it spirited off to Dubai, it would not be surprising if all Ragavan controls these days, is the kitty for legal fees.

Each one of the those interviewed by Daily Maverick expressed serious reservations that this important lieutenant has a pot of gold waiting for her in Dubai.

In the #GuptaLeaks there are references to Ragavan’s “shareholder” status in some of the Gupta companies but the value of whatever that was has now virtually been wiped out – at least access to it on South African soil.

In the words of a former Gupta business associate: “I doubt there is anything in it for her. She is just a devotee.” DM