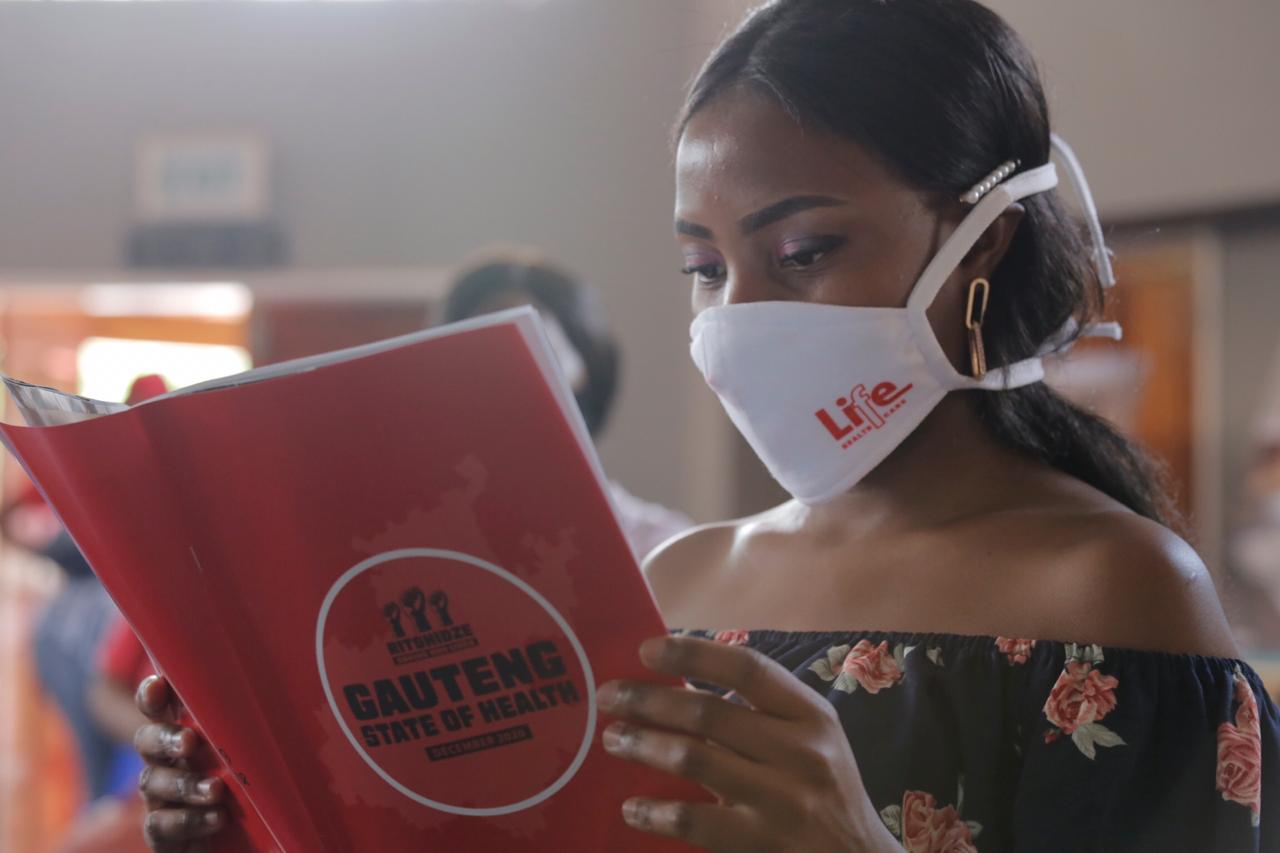 An attendee reads of a copy of the Gauteng: State of Health report at its launch by Ritshidze on World Aids Day, 1 December 2020, in Soweto. (Photo: Ritshidze)

For six months, communities across Gauteng have been monitoring the quality of HIV service delivery. The data they collected under the banner of Ritshidze has been compiled into a report which exposes that the vast majority of primary healthcare facilities fail their patients at every turn — from losing medical files to spewing verbal abuse. Government at all levels has acknowledged this report and has committed to taking the specific clinics to task. And Ritshidze has promised to follow up on all of these assurances within the next two weeks.

The majority of people living with HIV in Gauteng have to contend with medicine shortages, lost files, reprimands from staff, hours of waiting as well as non-existent TB infection control when they try to access treatment at their local clinic. This is the finding of a report compiled by Ritshidze, a national network of people living with HIV in South Africa who monitor the quality of HIV service delivery at primary healthcare facilities.

On World Aids Day 2020, the programme held a public hearing in Soweto to provide a space for people living with HIV to share their experiences of accessing care with the public and particularly the department of health. In addition, they presented the report and put forward their practical solutions. In response, Johannesburg District Health and the national department of health committed to engaging with the report and taking specific clinics to task over the inadequate quality of their care.

Minister of Health Zweli Mkhize has given the instruction that Ritshidze’s community monitors be given access to all facilities across the country in order to carry out their oversight work, according to Treatment Action Campaign General Secretary Anele Yawa.

Ritshidze is a community-led monitoring system that was developed by civil society organisations which represent people living with HIV, such as the Treatment Action Campaign, the National Assembly of People Living with HIV and the Positive Action Campaign. It has the support of the likes of the Health Global Access Project and UNAIDS.

Since July 2020, the programme’s community monitors engaged with more than 4,000 healthcare users and healthcare providers at the 120 clinics and community healthcare centres across the City of Johannesburg, City of Tshwane, Ekurhuleni and Sedibeng. This data forms the backbone of the Gauteng: State of Health report and the solutions it puts forward.

Some of the healthcare users volunteered to share their experiences at the hearing, mostly anonymously or going only by a first name. Most shared stories of their medical files being lost, and therefore their treatment being stopped or arbitrarily changed, and the shouting and reprimands meted out by clinic staff if they defaulted on their treatment or missed an appointment.

A young woman who did not want to be named said her medical file went missing six months ago as Covid-19 took hold, and that she was given a duplicate paper as a substitute. She went for a check-up and was served outside — over the fence:

“They gave me treatment outside without them checking any vital signs, so I suspect the person who served me over the fence is the one who misplaced my file. So, when I go to the facility with the duplicate they reprimand me and send me to go and check for a proper file. It makes me want to default. As a result of all of this my viral load was very high. I only had bottles to show them what treatment I was taking. When they changed my treatment they didn’t explain it to me and they said it’s because I defaulted. They blame me for defaulting,” she explained.

A young man, who did not want to be identified, said the lack of confidentiality was enough to put him and other young people off going to the clinic. “As a young person, I don’t want everyone to know my status. So when I go there they will just call out my name and give me my medicine in front of everyone looking. As a young person, I don’t feel free. It makes me default on my medicine,” he said.

Two women shared their experiences of being put on a treatment that could affect their fertility, but without having any say in the matter. Many shared tales of non-clinical staff, such as cleaners and security guards, being sent to find their medical files and then discussing it with staff within earshot of other patients. Sex workers, transgender people and people who use drugs told of their experiences of being denied treatment and being told by staff that they were undeserving of medical care.

These experiences are echoed in the report by the data collected from thousands of people who use primary healthcare facilities in Gauteng. Ritshidze has put together lists of practical demands, such as filling vacant posts, extending clinic opening hours, disciplining staff, establishing filing systems and extending anti-retroviral refills to three to six months:

In attendance at the hearing were representatives from Johannesburg Health District who did not identify themselves. They committed to engaging with the report at the district level and said “we need to name and shame” those not offering quality care at clinics. Nevertheless, they insisted that there “are still good women and men out there in our clinics that give good quality of care and they also need to be known and people living with HIV should know that and embrace it.” In addition, they were adamant that key populations such as sex workers or transgender patients do have specific programmes of care.

Also in attendance was the chief director of the National Department of Health’s HIV/Aids and sexually transmitted infections cluster, Dr Zukiswa Pinini.

“As a department of health, we are custodians of health for all citizens of the country. You have the right to go to a facility and get treatment and if you don’t get treatment then you need to report it. Take the name of the facility and the individual and report to authorities — first the facilities manager and if need be then escalate to the province. We do really want to care for everyone in the country,” the Johannesburg Health District representatives said.

In addition, they committed to writing a letter to the provincial heads of department to make sure they knew of Ritshidze and would allow them into facilities to monitor care.

In closing, Yawa said that the Ritshidze leadership had met Minister of Health Zweli Mkhize and the Director-General of the National Department of Health Sandile Buthelezi on 30 November to discuss the report.

Yawa said: “Mkhize gave the instruction to Buthelezi that Ritshidze must operate in all provinces, districts and facilities. We will heed this instruction — and make a follow up in two weeks’ time to give feedback to them. We are not here to ask favours. We are here to demand our constitutional rights. And the government is aware of this.” DM/MC