The Honda Ballade is back 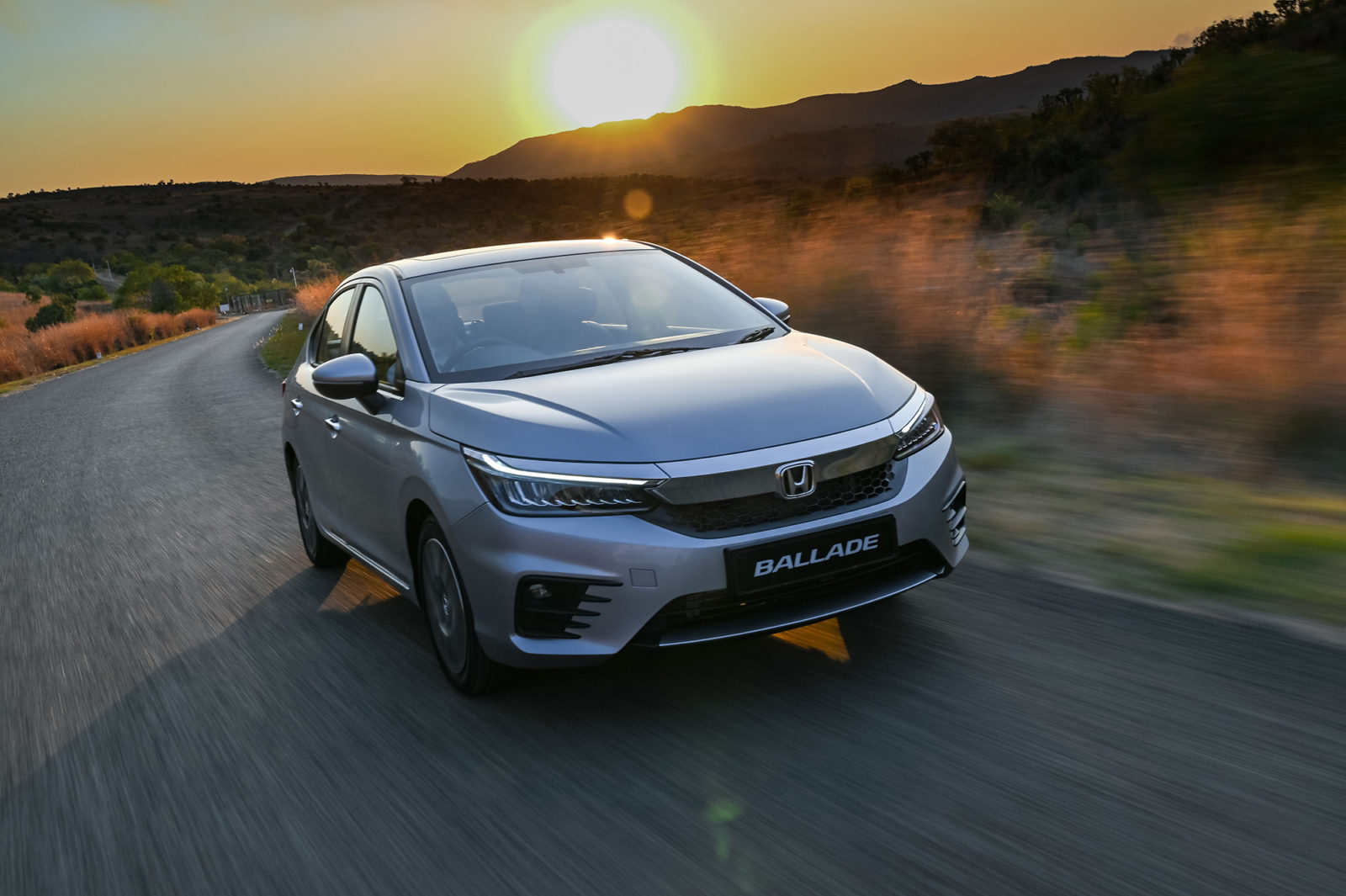 The new Honda Ballade pretty gorgeous from the front, all sharp and sporty, with a lower and wider stance, growing 110mm in length, 55mm in width and dropping 10mm lower compared with the outgoing model.(Photo supplied)

A favourite for almost 40 years among South African sedan fans, the all-new Honda Ballade has arrived, more empowered and better looking than ever before.

Honda South Africa has not had a good 2020. In fact, for most car brands it’s been a veritable sh*t show. In truth, before Covid-19 hit our shores, local Honda sales had been slow, with the Japanese manufacturers selling just over 1,000 units in January and February 2020, combined.

Globally Honda is a brand to reckon with. In the 2020 fiscal year, 4.8 million vehicles sold globally, along with 19.3 million motorbikes. In the US, Honda is the bomb – the fourth-highest selling brand, after Ford, Toyota and Chevrolet. By the end of 2019, more than 1.6 million of its cars and SUVs had found American-based owners.

Honda is not alone in its dismal local turnover. According to Naamsa, (National Association of Automobile Manufacturers of South Africa), the country’s new vehicle sales figures for October 2020 showed a continued “downward trajectory”, with a year-on-year decline of 13,216 units or about 25.4% (albeit the decline is at a slower pace than recent months). The local Japanese H-brand sold just 300 vehicles in October 2020.

Despite the motoring market’s decline, excitement was in the air a fortnight ago as Honda launched the eighth generation Ballade to local motoring media in Franschhoek.

For years I’ve had a soft spot for the Ballade. (For those keen on the etymology, it gets its name from the French word for “ballad”.)

My first car was an olive green metallic Honda Ballade SC9, also known as the “pop-up”, with its motorised eyelids that winked open when the main headlights were switched on. I drove the 1.5 12-valve EW until someone nicked it one night in a dark street in Melville. I loved that car.

My replacement ride was a light metallic blue 1994 Ballade 150 which proved its reliable worth until a huge truck side-swept me off a Joburg road, crushing the entire right-hand side of my beloved on the corner of 11th and Oxford. My next ride was a Golf 3 GTS, but that’s a story for another column.

The Ballade has been around in South Africa since 1982 and much like its present-day competitors, the Toyota Corolla or Quest, it’s considered to be one of those brands associated with reliability and consistency, if not power or sex appeal.

However, the first thing I noticed on viewing the new Ballade was a leap up in aesthetics. It’s actually pretty gorgeous from the front, all sharp and sporty, with a lower and wider stance, growing 110mm in length, 55mm in width and dropping 10mm lower compared with the outgoing model.

If you’re wondering, i-VTEC stands for “Intelligent Variable Timing Electronically Controlled” which is a system that combines VTEC and VTC (Variable Timing Control) to produce about 10 horsepower more than VTEC alone. So in plain speak, it facilitates more power at higher RPMs and at lower RPMs it improves fuel consumption.

The new Ballade offers a slight upsurge in power of 89kW while its torque of 145Nm stays the same as the outgoing model, although it reaches its peak at a lower engine speed of 4,500rpm. Fuel consumption comes in at a claimed 5.5l/100km.

The CVT gearbox, which I have to say is not one of my favourites in any brand, has been revised and now features something called “G-Design” shift control, where integrated artificial “gears” can be selected via steering-wheel mounted shift paddles.

According to Honda, this improves the driver experience, evoking a traditional automatic transmission through the integration of artificial gears during acceleration, while simultaneously enabling the enhanced efficiency of a CVT.

The new Ballade comes in three variations: the Comfort, the Elegance and the all-new RS. Like eyes in humans, the lights can be considered to be the key to a car’s soul and these have had a significant makeover with all three models equipped with rather spiffy front halogens, LED daytime running lights and stand-out LED tail lights.

There’s also a new multi-function steering wheel, cruise control and auto air-con. On the safety front, all models are equipped with six airbags, as well as ABS with EBD, brake assist and electronic stability control.

The inside tech has definitely seen some impressive improvements in terms of intuitive connectivity by way of a newly designed high-res eight-inch touch-sensitive display in the instrument panel for the Elegance and top of the range RS which are Apple CarPlay and Android Auto compatible. While the Comfort must make do with a five-inch screen which is much too small for my liking, the RS additionally has a nifty reverse-view camera and a seven-inch TFT digital multi-information display which can be controlled via the steering wheel, to prevent distracted driving.

So let’s get to that RS badge on the back that Honda has introduced. Now don’t get too excited thinking RS stands for “rally sport” or has anything to do with actual power. In Ballade speak, RS stands for “‘Road Sailing” – a nod to the smooth nature of a boat sailing on water, but it’s actually more to do with cosmetic enhancements, much like the case of the upscaled design R-line in VW Golfs.

So in the looks department, the RS model flashes a noticeably more pimped-up ride with its new mesh honeycomb grille, 16-inch alloys, a sunroof, a faux carbon-fibre diffuser, along with a front and rear sport bumper and rear spoiler. It swaggers with sport leather seat trims while the Comfort and Elegance derivatives must make do with more demure cloth upholstery.

On launch, I got to spend a few hours in the RS, my pick of the bunch, especially due to its looks, and while I still found the background whine in the CVT gearbox a tad annoying on acceleration, once cruising at a decent speed, the engine finds its groove and the RS becomes a very pleasant drive.

I was impressed with the Ballade’s handling and stability as we traversed winding mountain passes in the surrounds of Franschhoek, with almost no body roll. On some poorly tarred road surfaces, the Ballade’s grip and suspension were impressive, staying true to its heritage of a reliable and solid ride.

With SUVs being all the rage among local car customers and Covid-19 all but decimating the tourist industry which feeds the sedan rental and e-hailing Uber et al market, my hope is that Honda South Africa and the impressive new Ballade make it through these rocky times and thrive. DM