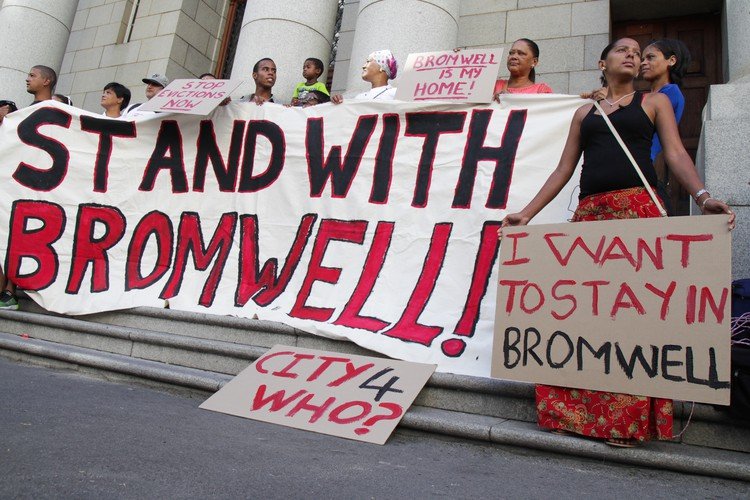 Bromwell Street residents who are facing eviction want the court to order the City of Cape Town to provide emergency accommodation near the inner city. (Archive photo: Ashraf Hendricks)

No social housing has been built near the inner city in Cape Town in the last four years, says advocate Sheldon Magardie.

Magardie is arguing in the Western Cape High Court in favour of a group of Woodstock residents facing eviction from their homes in Bromwell Street. The application was brought by the residents against the City of Cape Town. The residents are also supported by housing activists at Ndifuna Ukwazi and Reclaim the City.

The residents want the City to provide them with emergency housing in or near Woodstock. They also want the court to declare that the City’s housing programme is unconstitutional because it does not accommodate people who are at risk of homelessness due to evictions in the inner city.

The residents’ homes were bought by private developers, Woodstock Hub, in 2013 as part of Woodstock’s gentrification push. Meanwhile, the group had fought to remain in Woodstock.

On Monday, Magardie told the court that Woodstock and Salt River are historically black working class suburbs that resisted the imposition of the Group Areas Act. He said that by 2016, Cape Town had the third highest property price growth in the world.

Woodstock had been identified by the City and Province as a site for private developer-led “urban regeneration”.

The Bromwell Street residents are long-term tenants. One 80-year-old resident has lived in her house her entire life. In March 2016, an eviction order was granted. The residents petitioned the City with the support of Ndifuna Ukwazi, as many of them would be left homeless by the eviction.

They were promised by then-mayor Patricia de Lille that they would have the first option on social housing units to be built in Woodstock and Salt River. However, only one of the Bromwell Street residents qualified for this social housing, said Magardie.

He said only a 42-unit building on Pickwick Street in Woodstock was constructed in 2017. People who had been living on state-owned land on Pine Road were moved into this building so the Pine Road land could be developed into social housing.

The Bromwell Street families were offered emergency accommodation in Wolwerivier, 30km away from their homes and jobs, and then land and building materials in Kampies, Phillipi, 21km away from Woodstock.

Magardie criticised the City’s inconsistent response to the two evictee groups. He said that the City’s insistence that emergency or transitional housing cannot be built in the inner city is undermined by the evidence of the Pickwick Street building.

Magardie questioned why the City had not planned emergency housing in the inner city when the negative consequences of gentrification were already evident.

Magardie said that “if it was open to governments or the state to plead inability to comply, then rights would not be worth the paper they’re written on”.

Magardie asked the court to declare that there is a constitutional defect in this aspect of the City’s housing programme.

Advocate Karrisha Pillay, for the City of Cape Town, argued that the delivery of housing rights is constrained by access rights and was subject to the state’s available resources and is not an immediately realisable right.

Pillay said the City accepted there should be housing in and around the inner city. The City also accepted that the legacy of apartheid left a divided city that must be addressed.

Pillay argued that the consequence of creating transitional housing for the Bromwell Street residents was that the 240 housing units expected to be built on Pine Road and the 600 units for Salt River Market (yet to be developed) may not be completed in time.

She said the City wasn’t “closing the door” on emergency housing in the inner city, but that such housing would only come in time.

Pillay is continuing her arguments in court on Tuesday when advocate Ross Randall, for the Woodstock Hub, is also expected to address the court. DM