Finding money to fight disease: The case for raising the Health Promotion Levy 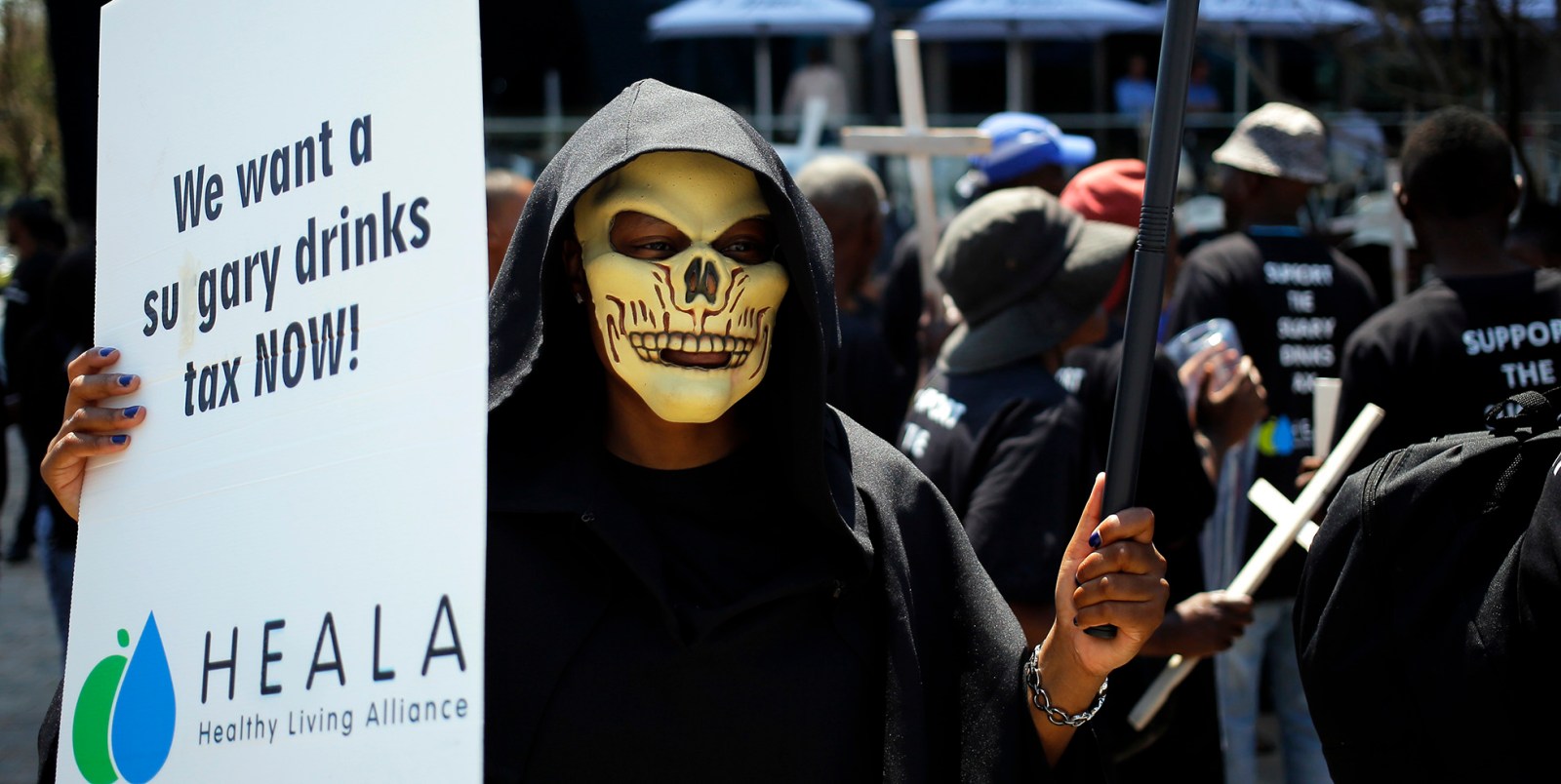 A protester carries a placard calling for a tax on sugary drinks during a protest organised by the HEALA (Healthy Living Alliance) to mark World Diabetes Day in Johannesburg on 14 November 2017. (Photo: EPA-EFE / Kim Ludbrook)

The recent budget policy statement shows South Africa finds itself in a very tight fiscal space where it has to navigate a global pandemic along with other health challenges such as rising rates of non-communicable diseases. Russell Rensburg argues that the Health Promotion Levy should be increased to 20% — which will raise much-needed revenue that will contribute to preventing disease and reducing healthcare costs.

Finance Minister Tito Mboweni’s Midterm Budget Speech highlighted the grim truth that South Africa is facing its deepest recession in recent history. Covid-19 has amplified existing crises in health, economics, politics and the climate. The pandemic brutally exposed inequality fault lines, where access to life-saving equipment depended on whether a person had access to private medical aid or not.

An analysis of National Institute for Communicable Disease (NICD) hospital admission data as of 10 October 2020, for example, suggests that more than half of covid-related admissions were made in the private sector. The data suggests higher covid-related mortality when admitted to public sector facilities. In the public sector, more cases (for example asymptomatic covid positive cases) may have been deferred for home care whereas the private sector could admit to “observe”.  The extent to which this constrained the public sector response is an area that requires deeper analysis.

People with non-communicable diseases (NCDs), such as uncontrolled type 2 diabetes, obesity and who are overweight, are at greater risk of severe Covid-19 illness and death. More than 60% of the Covid-19 patients in South African hospitals had hypertension and 52% had diabetes. The combined Covid-19 and NCD epidemics have significantly increased demands on the country’s healthcare system. Despite the country’s efforts, we have the dubious distinction of having the most confirmed cases and most reported Covid-19 deaths on the African continent. Even if this may in part be due to South Africa having better testing and notification systems, the numbers remain high.

Either way, failure to adequately address NCDs over the past two decades meant South Africa was at great risk when Covid-19 struck.

Dangers could have been avoided

Many of the comorbidity dangers could have been avoided if the country’s primary health care and health promotion programmes had been resourced as initially envisaged. According to estimates of diabetes prevalence, only one third of people in SA are currently being treated.

According to a recent study, in 2018, it cost more than R2.7-billion to diagnose, treat and manage 240,000 type 2 diabetes patients. It would cost an additional R19.1-billion to treat all in need, diagnosed and undiagnosed. This eight-fold increase in expenditure is about 12% of the national health budget.

By 2030, about 4.5 million people in South Africa’s public sector are projected to have type 2 diabetes. This is likely to cost the public healthcare system R35.1-billion.

Cost-effective policy mechanisms already exist to mitigate the impact of increased incidence of NCDs. One of these is the recently passed Health Promotion Levy (HPL) of 2018, which raised approximately R3.195-billion in its first year.

However, a mere R100-million has been directed towards health promotion activities, less than 5% of the total revenue raised. If all the revenue had been available for health promotion, South Africa’s primary health care system could have benefitted significantly, for example, by fully employing 54,000 adequately trained community health workers to deliver health promotion and linkage to care.

At present, the levy, for now only on carbonated sugar-sweetened beverages, is set at 11%.

To be effective as a disincentive to purchasing sugar-sweetened beverages, the World Health Organisation suggests the most effective rate to reduce consumption is 20%. Evidence shows that a tax on sugary drinks that increases prices by 20% can lead to a reduction in consumption of around 20%, thus preventing obesity and diabetes.

Unfortunately, a study by the National Economic Development and Labour Council (NEDLAC) to assess the impact of sugary beverage taxes has still not been completed.

The levy is too narrow

The levy presently covers only carbonated sugar-sweetened beverages. It excludes fruit juices, “sanctifying” them as a “healthy option”. However, the irony is that the sugar content of fruit juices is often as high as that in carbonated drinks.

Fresh fruit is a healthy part of our diet, but when converted to fruit juice, the amount of sugar is concentrated because more fruit is needed for the volume of juice. This “free sugar” is excessive, making these drinks no longer as healthy as eating whole fruits.

A cohort study from the United States found that with each additional 354ml serving of fruit juice per day, all-cause mortality risk over the course of six years on average, increased by 24%, compared to 11% for other sugary beverages. Fruit juice consumed by babies of a year old is associated with higher fruit juice and sugary beverage intake in early and mid-childhood, along with greater obesity. Just half a cup more of daily fruit juice is linked to a 15% higher risk of developing diabetes.

Time to update the HPL

The preamble of the South African Constitution recognises the injustices of the past and commits the country to a shared ideal of a better life for all. This includes taking progressive legislative and other measures to advance the right to health, as explicitly required in the Constitution.

Now is the time to increase the HPL to 20% and expand it to include fruit juices. Failure to do so would be a missed opportunity to both raise much-needed revenue and to contribute to preventing disease and reducing healthcare costs.

Now, more than ever, we need that better life. DM/MC

Russell Rensburg is Director of the Rural Health Advocacy Project, incubator of the Healthy Living Alliance.

This article was published for Spotlight – health journalism in the public interest. Sign up for our newsletter.