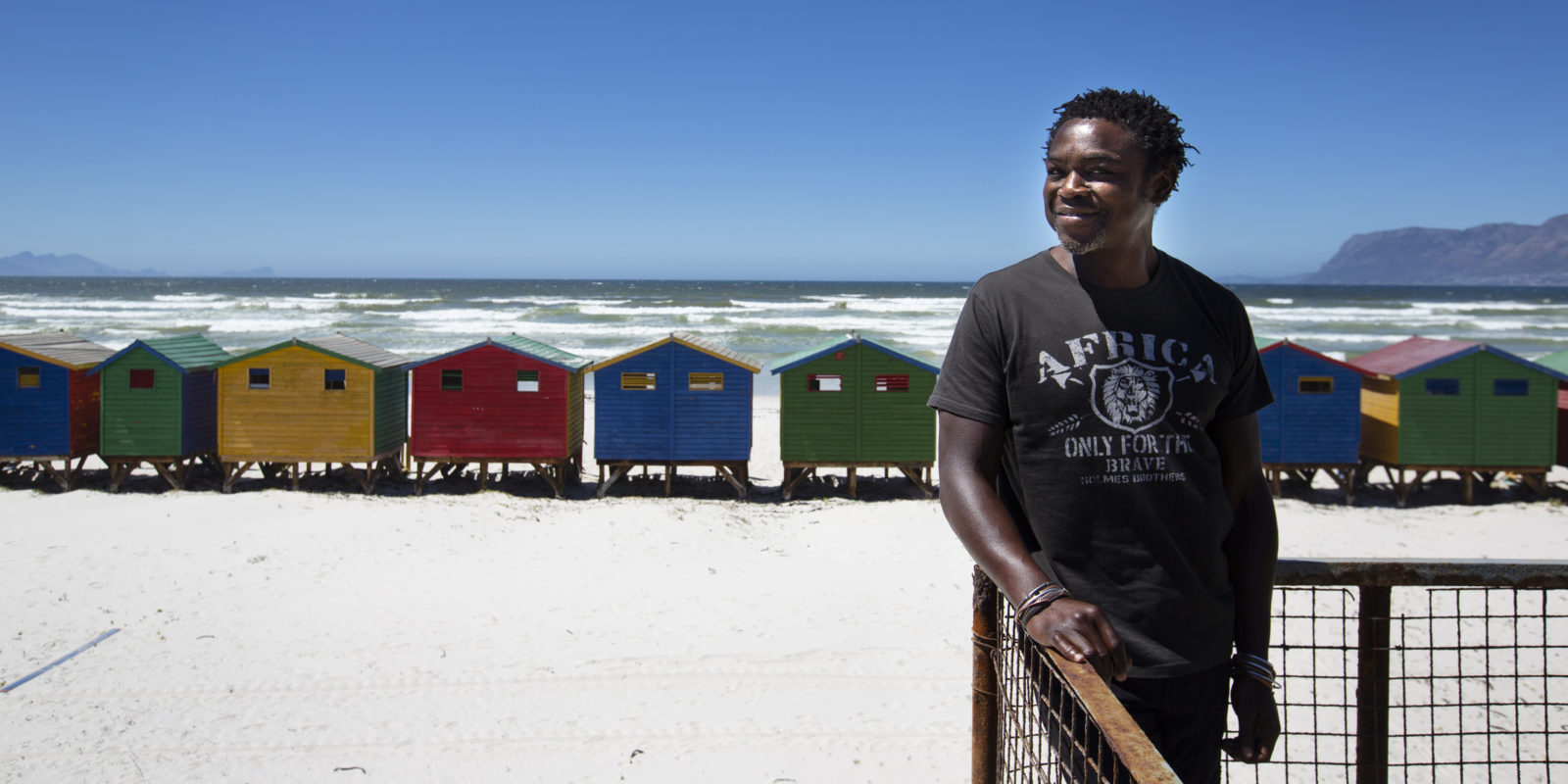 Director Sunu Gonera's "Riding with sugar" is about to hit Netflix this month. (Photo: Shelley Christians)

Family and identity are really what his new film, ‘Riding with Sugar’, is about. It’s the coming-of-age tale of a young Zimbabwean named Joshua who, having witnessed his parents being killed during the conflict, is living as an asylum seeker in Cape Town.

Sunu Gonera is glowing, a boyish grin projecting a youthfulness that’s only partially constrained by facial hair liberally speckled with wisps of white.

Are these his lockdown locks? “Yes,” he chuckles, fiddling with the shaggy beard. “Maybe I’ve discovered my identity as a wizened old man.”

He’s a jolly Yoda, though, exuding infectious brightness. He claims his “superpower” is the ability to make others smile and he loves making others recognise their own beauty, no doubt useful qualities when your job is herding a vast film or TV crew towards a shared vision.

Despite his lightness of spirit, there’s a restlessness. His creative cup runneth over. “I struggle to turn off the flow of ideas. I have so many stories I want to tell. It’s been like this for so long.”

Which is why 2020’s extended lockdown has been a mixed blessing. He typically spends eight months a year on the road, either on set, on location or scouting. Being homebound has afforded him the opportunity to iron out plans he’s long left on the back burner. There’s a big sci-fi project, his first animated feature, too. There’ve been novellas, short stories, comic books, a vast outpouring. And the break has come at a pivotal time, during the lead-up to the long-awaited 27 November release of his first truly African feature film, on Netflix.

It’s been a chance to “recalibrate” and “reconnect”. He says being on set, rushing constantly, means “losing that magic of just being with real, everyday people – and you put off dealing with your own issues”.

He’s been in therapy, too. “It’s wonderful, looking back at your whole life. I’m forever travelling all over the place, but with therapy it’s about going back to my township days, getting into things I’ve never really been able to deal with. I feel like I’m going to be a 50 times better filmmaker after this.”

It’s in his nature to see the upside even in the face of Covid’s unpleasantness. “There have been personal losses,” he says. “My father passed away. My godmother is sick. But on the flipside, I’ve [become] very close to my family. Playing backgammon with my wife, and learning about cooking from my daughter, who is an amazing vegan cook – I’m vegan now, too.”

Another ritual is the Sunday morning beach outing for a plunge in the sea. “Come rain, come shine, we do that every single weekend as a family.”

Gonera grew up in a large family, although far from the sea, in Bulawayo. “Nine of us, plus loads of half-brothers and half-sisters.” He says being the youngest boy in such a huge family was the start of his ongoing search for identity, “a search that has been a huge path for me”.

Family and identity are really what his new film, Riding with Sugar, is about. It’s the coming-of-age tale of a young Zimbabwean named Joshua who, having witnessed his parents being killed during the conflict, is living as an asylum seeker in Cape Town. Despite the consuming bleakness of his reality, he’s held aloft by his dream of winning a BMX championship.

Gonera’s own filmmaking dreams were sparked in township halls, where movies were screened. “As a youngster, I watched movies all the time.” He vividly recalls Bruce Lee – “always this everyday guy in these epic tales” – in a room full of mirrors in Enter the Dragon. And the scale of Ben Hur, in which a scene showing slaves being whipped made a huge impression. David Lean films were a big influence, as were Clint Eastwood’s Westerns with their wide-open spaces.

But if films were a means of childhood escape, he didn’t actively pursue making them until he’d been sidetracked and embarked on a career in finance. A stint on a film set as a runner reignited his storytelling ambitions and a series of fortuitous connections on international productions led to a Hollywood agent seeing his showreel, immediately signing him and quickly landing him an opportunity to direct his first feature.

That film was Pride, about a black Philadelphia swimming coach who trained a group of troubled youths in the early 1970s. Its theme of athleticism as a path to social upliftment echoes Gonera’s own experiences: as a boy, it was a series of sports scholarships that enabled him to attend private school. He even harboured ambitions of being a professional rugby player.

Before Pride had even been greenlit, Gonera packed up and moved his family to LA. The film earned him a nomination at 2008’s NAACP Image Awards, kick-starting a career that’s seen him direct episodes of series such as Madam Secretary, Snowfall and supernatural spy thriller The Rook. Most recently, he helmed two episodes of season four of Netflix’s 13 Reasons Why.

For the past seven years he’s been back in Cape Town, commuting to Hollywood or London, or wherever he’s working.

Despite his formidable track record and substantial contacts, it took him 15 years and more than a thousand rejections before his script for Riding with Sugar got picked up. It was a story he desperately wanted to tell, though, and he was pretty uncompromising about his vision.

He says he’s been greatly driven by a determination to have his voice as an African acknowledged. “I’ve always wanted to bring us Africans to the point where we say, ‘I have a place at this table, my dreams matter, my story matters, what I think matters.’ That’s a huge part of my activism. I feel we have to trust that we have the goods.”

Eventually, thanks to Netflix, he was able to shoot his script on location in Cape Town last summer. “It was one of the hardest things I’ve ever done, and also the most joyful,” he says.

It was for a certain artistic freedom that Gonera was determined to make his movie in Africa – he wanted to play outside the box and to capture the spiritual side of storytelling that’s particular to Africa. “For us Africans the story is circular; the Western way is a straight line.”

Indeed, much about Riding with Sugar is very un-Hollywood, elements that will probably feel off to an audience raised on neatly manicured big-budget storytelling.

And that’s okay, he says, because with this film he wanted to radically express his African identity. “It’s my owning of my ‘Africaninity’; and this film is really my love letter to my continent, my love letter to our unique diversity and cultural fusion – and to the beauty of Cape Town.” DM168