HIV prevention injection hailed as a ‘major breakthrough’ for women 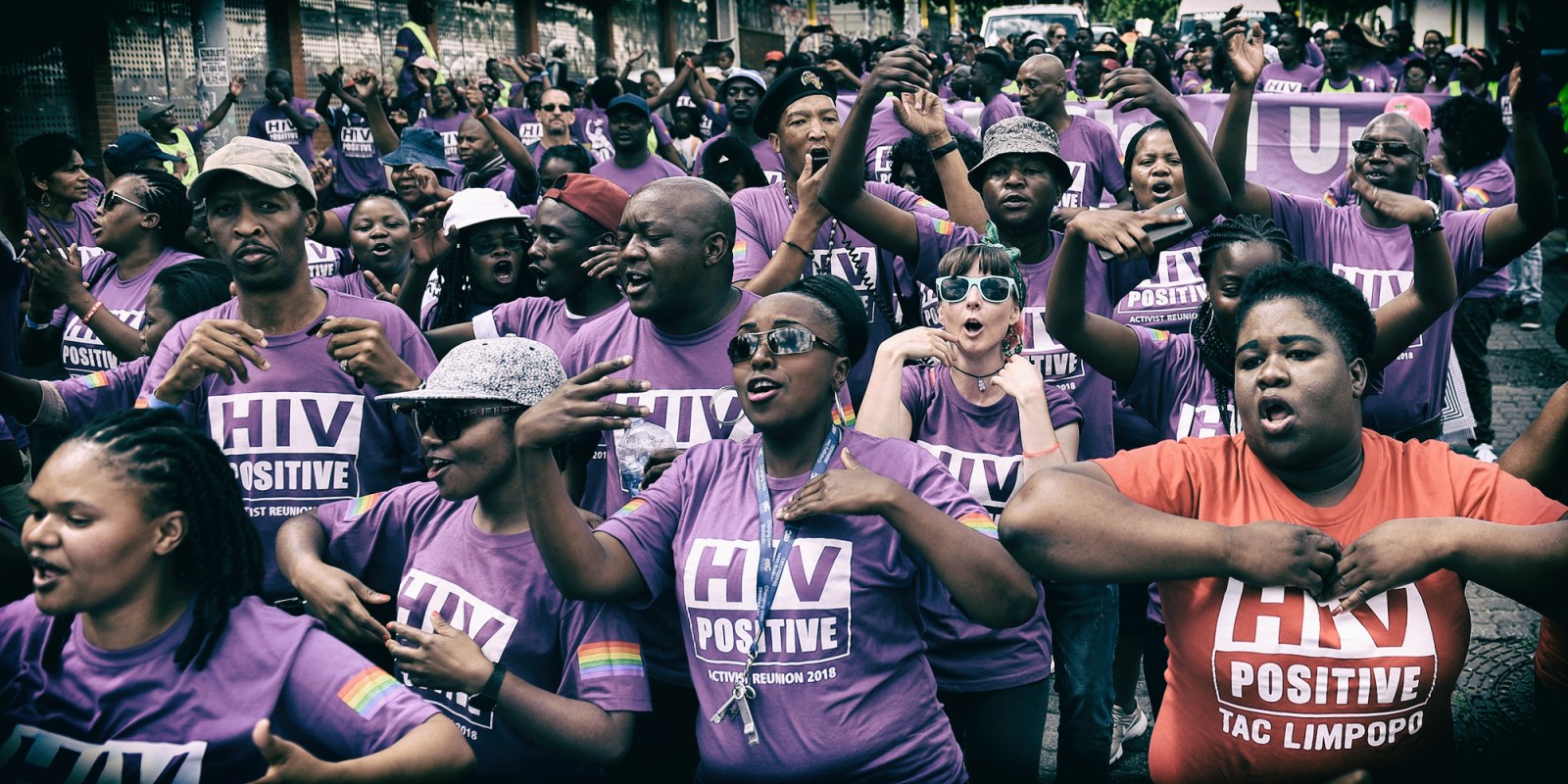 Members and supporters of the Treatment Action Campaign march to the Constitutional Court in Johannesburg on 10 December 2018 to thank it for what it has done for people living with HIV. (Photo: Gallo Images / Netwerk24 / Felix Dlangamandla)

Early results from a pivotal trial of an HIV prevention injection announced by University of the Witwatersrand researchers on Tuesday have been hailed as being a ‘game-changer’ to turn ‘the tide on HIV’. This is according to Professor Helen Rees, Executive Director of the Wits Reproductive Health and HIV Institute (WRHI), who announced the results via an online media briefing.

The study, called HPTN084 and led by the HIV Prevention Trials Network (HPTN), tested an antiretroviral (ARV) injection given every two months by comparing it to the standard of drug prevention that comes in the form of a daily oral pill. The injection has to be administered by a health professional.

The long-acting injection, which contains the antiretroviral drug cabotegravir, was found to be 89% more effective in the study at preventing HIV in women when compared to the daily pill that contains a combination of the drugs tenofovir and emtricitabine.

“This is the first time the world has seen such significant HIV prevention results for women,” said Wits’ Dr Sinead Delany-Moretlwe, who headed up the trial.

She said that having a “well-accepted” HIV prevention option for women is critical considering this group accounts for more than half of new infections in sub-Saharan Africa and that “women bear a disproportionate burden”.

If taken every day, on time and as prescribed, the oral regimen has been found to be almost 100% effective at preventing HIV. But there are myriad reasons why women have been found to struggle to adhere to daily pill-taking, including stigma from partners or family members who see their pills.

This is why these findings for an injectable option are so significant.

The HPTN 084 trial enrolled 3,223 HIV-negative women in Botswana, Eswatini, Kenya, Malawi, South Africa, Uganda and Zimbabwe. Women were  allocated either to the trial by receiving the oral, “arm” drug or to the one receiving the injection.

This equates to an incidence, or rate of new infections, of 1.79% in the oral treatment group versus 0.21% in the injectable group, with an overall average incidence of 1% – a notably low figure for young women in the region.

“I’m delighted to tell you that … both options work well, but [the injectable] works so much better,” said Delany-Moretlwe.

The results are so promising that the control arm, receiving the prevention pill, has been stopped because it was no longer deemed ethical to give women a treatment option that has been demonstrated to be less effective than the injection.

In a Wits press statement she added: “We know that adherence to a daily pill continues to be challenging, and an effective injectable product such as long-acting cabotegravir is a very important additional HIV prevention option for them. We are grateful to the women who volunteered for this study and the research staff – this study would not have been possible without their commitment to HIV prevention.”

The researchers don’t have enough information to delineate how much of a role was played by adherence versus actual drug efficacy in achieving these results. In other words, it is not entirely clear whether there would still be a significant difference between the study groups if everyone took the prevention pill every day as prescribed.

According to Delany-Moretlwe, the drug-levels in the blood of both study arms suggested that adherence was good, not only in the injectable group as expected but also in the group taking daily pills. However, she said that the researchers do think a major factor in the difference between the two arms likely comes down to adherence.

The World Health Organisation (WHO) said in a statement that these results do not contradict evidence showing that consistently using oral PrEP is highly effective as has been demonstrated in several trials.

“However, adhering to the daily dosing schedule is important. Even short lapses in taking oral PrEP can reduce the protection from HIV acquisition,” the WHO said.

Adverse events, or the reporting of negative or unwanted side-effects, was low in both study groups.

“These results are a milestone for prevention of HIV among women at risk of HIV worldwide and especially for women in sub Saharan Africa. If we are to turn the tide on the HIV epidemic, we will need prevention options that work for women in sub-Saharan Africa. These findings provide great hope and motivation for additional studies to show safety and acceptability in adolescents, pregnant and breastfeeding women,” said Rees.

“After years of evaluating HIV prevention strategies for women, I am thrilled that we have found CAB LA [long-acting cabotegravir] so effectively reduces HIV acquisition and provides women more choices in how to protect themselves,” said Dr Mina Hosseinipour, protocol co-chair for the study, in a HPTN press release.

As is the case with contraception, it has been found that the more prevention options people have access to, the more people will utilise them.

“We know that real choice depends on giving women—and all people—full information about risks and benefits, pros and cons of different methods, and of making sure that those methods are available for people to select from. An injectable will be a great choice for some people; for others, daily oral PrEP or the Dapivirine vaginal ring will be the right strategy for reducing HIV risk. A new HIV prevention option for women is cause for celebration,” said Chilufya Kasanda Hampongo, a Zambian women’s health advocate with the Treatment Advocacy and Literacy Campaign (TALC) in a press statement published by the Advocates for HIV prevention to end AIDS (AVAC).

While the HIV community has real cause to celebrate, further questions around access remain because it is still unclear how much the injectable regimen will cost and if low- and middle-income countries, who need it most, will be able to afford it.

Cabotegravir manufacturer, ViiV Healthcare, has yet to announce its price but has indicated that it will make access a priority, according to Delany-Moretlwe.

Speaking at the press conference, she said that “access is an important commitment made by ViiV Healthcare and we are looking forward to hearing more”. She estimated that it could take around two years for the injectable to reach women outside of the study. She said that the “important questions we need to ask in the meantime as we [wait for the drug to be licenced following international and domestic regulatory approvals], should be to understand what the costs are going to be”.

While cost is a concern, AVAC’s Mitchell Warren warns the HIV community to be vigilant should access be delayed, as has been the case historically.

“The urgent work now is for policy makers, funders, program implementers and communities to design and build HIV prevention programs and health systems that can deliver the growing array of biomedical PrEP options, including oral, vaginal ring and injectable, and make them feasible choices for all people at risk of infection. This is essential work that can, and must, begin now, while we await further data, regulatory review and potential normative guidelines. Key to those efforts will be ensuring that we don’t repeat the delays that have slowed daily oral PrEP rollout over the past eight years,” he said in a statement.

The WHO pointed out that before the injection can become available to people outside the HPTN 084 study, the trial results will have to be fully reviewed and submitted to a stringent regulatory authority for approval.

“CAB LA and manufacturing capacity will have to be developed. There are also other safety and implementation issues that need to be considered prior to a broader roll-out. Safety studies in adolescents and among pregnant and breastfeeding women will be needed and open-label extension (OLE) studies will need to be considered to understand the most effective and acceptable implementation approaches,” the WHO said.

In South Africa the injection will have to be registered by the South African Health Products Regulatory Authority before it can be made available.

“This incredible breakthrough will certainly save the lives of many women living in sub-Saharan Africa, and beyond,” he said. DM/MC