The unfinished business of the TRC is killing us, say apartheid’s victims 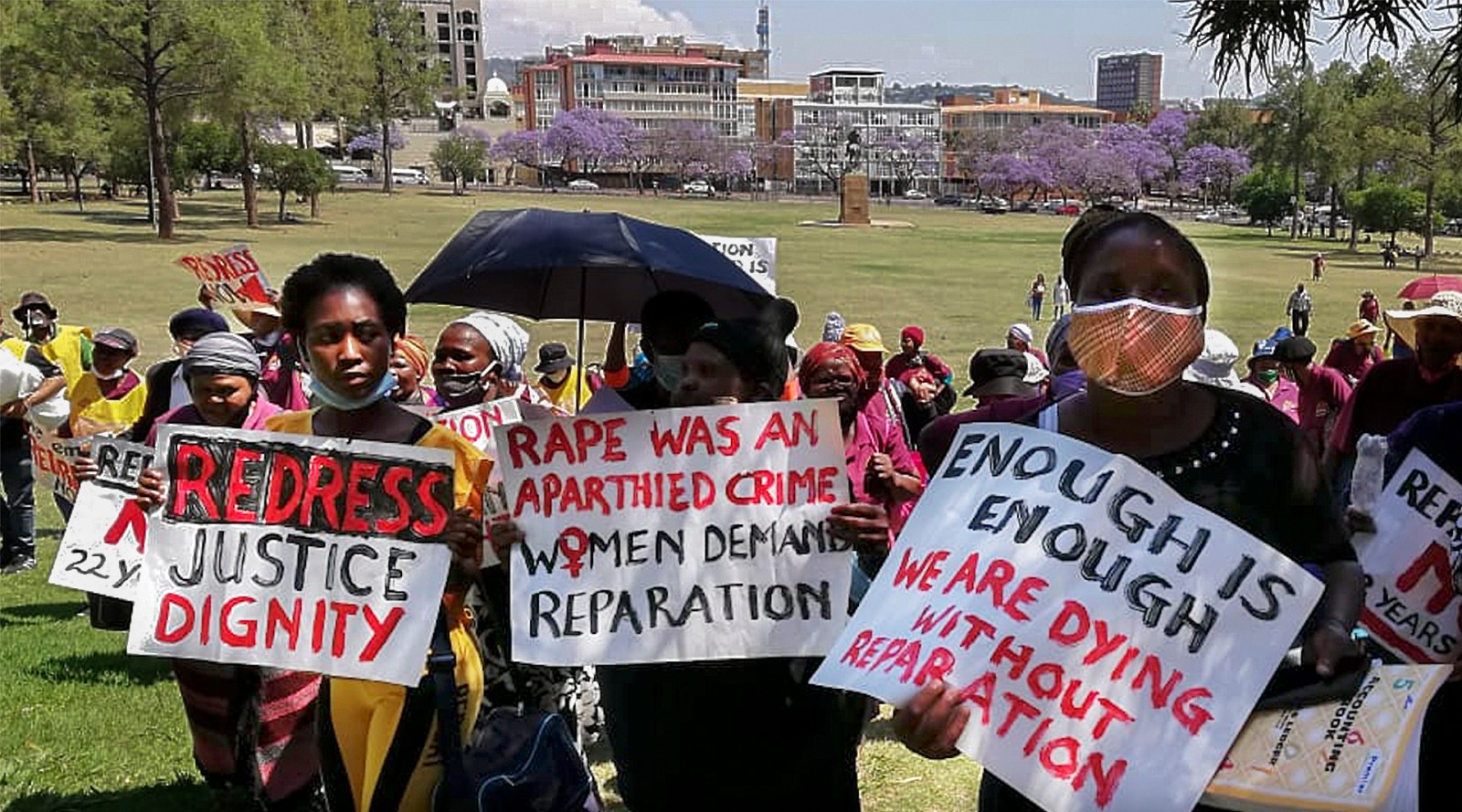 On 28 October 2020, members of Khulumani Support Group protested outside the Union Buildings in Pretoria. They demanded  “reparations now!” for the survivors of human rights violations during the apartheid era.

“We, Khulumani Support Group are victims and survivors of apartheid human rights violations. We have been fighting for more than 20 years for reparation, redress and rehabilitation.

But the government does not care about the victims. The basic things our government promised us: to get proper medication, to receive proper financial help, to get individual educational help. Today, two decades later, they have given us none of these.

But we will never give up. We are giving them an ultimatum: give us reparation, now. If not, we will go and die in front of you.”

These were the words of Nomarussia Bonase, Khulumani Support Group National Organiser, in March 2020. Since then nothing has changed. This was the reason for the protest in October. These struggle veterans, many now impoverished, elderly and with chronic health problems, called on Government leaders to meet with them, to finally find a way to provide the promised reparations, 20 years late.

A government official in the Presidency came out to receive their memorandum; and blandly assured them that the office would send an official response by email within two weeks. The demonstrators said they would sleep in front of the Union Buildings until the Government agreed to address the problem. They pointed out they had been told for decades that they would get an email, or a workshop, or a discussion, and these never materialised.

And so these 112 struggle veterans spent the night sleeping in the grassy space in front of the Union Buildings. The next morning, the same Presidency spokesman presented a written letter saying they must meet with the Ministry of Justice and assured them that the Presidency would direct the Minister to do this. Khulumani determined to request a meeting with the Minister of Justice within seven days, ending the sleep-in that put lives and health at risk.

Six days later, the Minister has neither responded to nor acknowledged that request.

The law of unkept promises

The backdrop to Khulumani’s demand is the statement of President Nelson Mandela 22 years ago, on 29 October, 1998, when he received the initial report of the Truth and Reconciliation Commission (TRC). He promised that:

“It is for those who have suffered losses of different kinds and magnitudes to be afforded reparation, proceeding from the premise that freedom and dignity are the real prize that our sacrifices were meant to attain.”

Today, more than two decades later, government has paid out little or nothing in reparation. Those who were promised redress remain in desperate need; many are dying in poverty and despair. Many still live with physical damage from torture and bullets; without promised houses, medical care, education for their children or financial assistance.

Their distress indeed has worsened, driven by continued inequality, corruption, and now Covid-19. They say: “we have no freedom or dignity while we remain mired in poverty, burdened with physical and social scars, and unable to put aside wounds of the past.”

The record of our government’s failure to pay reparations is dismal.

Of the 22,000 verified victims identified by the TRC (called “the closed list”), fewer than 16,000 received a drastically reduced, once-off reparations payment of R30,000 per person. The TRC had recommended giving each person R126,000 over a six-year period.

The list compiled by the TRC does not include tens, possibly hundreds of thousands of people who  qualify for reparations under the act. These were people who failed to get to the TRC, or whose records were lost in administration, or whose statements were not recorded. Those excluded include thousands of women who were raped by apartheid forces – as the TRC did not include rape as a political crime that could qualify for amnesty.

Since the TRC closed down, government refused to set up other  mechanisms to complete or correct this truncated list. The DOJ maintains that regulations enshrining the “closed list” cannot be changed, although the TRC Act itself prescribes mechanisms to add to the list (Section 47 of the amended Act), and also provides for adjusting and changing regulations developed under the act by the Presidency and the Minister of Justice.

Moreover non-financial reparations proposed by the TRC, and accepted by Parliament have not materialised. Health benefits (including for medical conditions caused by apartheid-era torture, bullet wounds, conflict-induced stress, and incarceration) have never been provided. Limited educational benefits have been offered since 2014 to some on the “closed list”. Housing assistance is non-existent. No memorialisation processes have been funded through the President’s Fund.

In 1996 Government established the President’s Fund to provide reparation and rehabilitation to apartheid’s victims, within the TRC Act. Today the President’s Fund has R1,68-billion earmarked for reparations; it is invested in the Public Investment Corporation (PIC), under the supervision of the Department of Justice.

The TRC Unit in the Department of Justice asserts that government has already paid out all monies that are owed for “individual reparations” in line with existing regulations. They plan to hand out remaining funds to “community rehabilitation projects”, and have drafted regulations to spend all remaining money in the President’s Fund on these.

These draft regulations aim to allow DOJ officials to handpick communities to receive these funds; to work with municipal officials to design projects, with minimal consultation with beneficiaries designated by the Act. Civil society stakeholders believe that, at best, government officials will use reparations money to bail out bankrupt municipalities; at worst, they will open the door to corruption.

Since last week’s action, Khulumani has asked the Minister of Justice Ronald Lamola to clean up the failures of the past 20 years. At this meeting they will ask that the regulations in place are addressed so that victims are paid the reparations due to them without further delay and that:

“A new system for managing the President’s Fund must be established that will ensure reparations are paid by the end of 2021 in line with the TRC’s original proposals and Act…The process of establishing community projects, with the associated regulations, should be halted immediately until the full plan for reparations has been finalised.”

Khulumani asks that those South Africans who are committed to a transformed, equitable, and democratic society add their voices to support Khulumani members who demonstrated last week for their human rights and long-denied redress.

This matter must be resolved now. DM/MC

The Khulumani Support Group is a membership-based civil society organisation formed in 1995 to support those who suffered from apartheid-era human rights violations at the TRC; and to ensure reparations, redress and rehabilitation in our democratic society.

Judy Seidman is a member of the Board of Khulumani Support Group.