Free State Preview: ANC will have to rise above scandals to silence detractors in poll 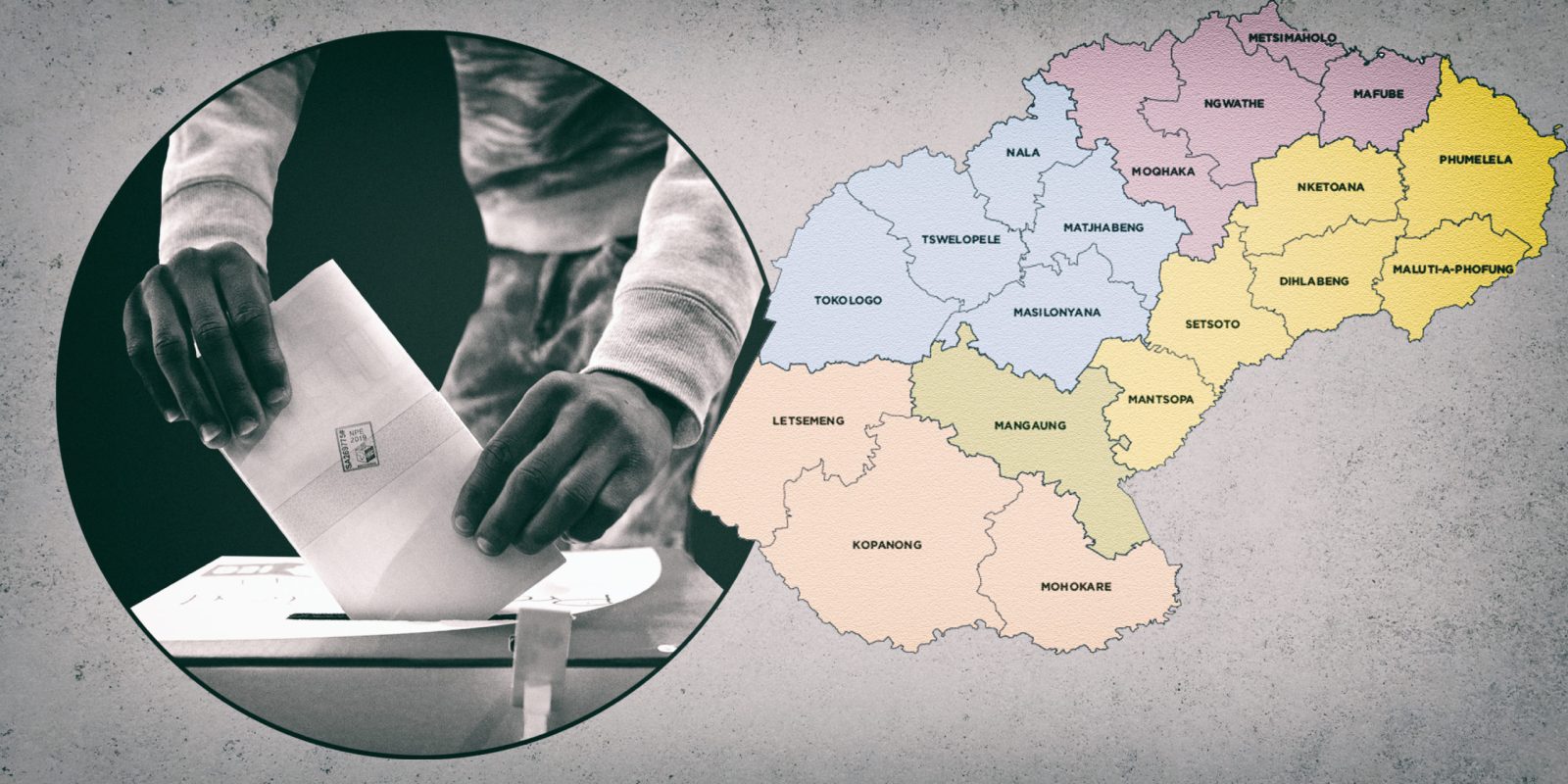 The ruling party knows that they can make a big statement on the road to the local government elections in 2021 with convincing wins in Mangaung, a solid hold in Mohokare and a seat pickup in Matjhabeng. What is unclear is how the EFF and the independent candidate will perform in Mohokare and how the DA, ADEC and UFOC will do

On Wednesday, 11 November, 107 seats will be contested in by-elections in all nine provinces. This is the sixth article of a series in the build-up.

The African National Congress (ANC) had an outright win in Ace Magashule’s home province in 2019, but were down by 9% points from their 2014 total as they ended on 61% of the vote, losing three seats in the legislature. They were still well ahead of the official opposition, the Democratic Alliance (DA) who finished with 18% of the vote, slightly up from their 2016 total. They were also able to win an additional seat in the legislature by getting a 6th seat. The Economic Freedom Fighters (EFF) doubled their seats in the legislature by winning four seats, and improving their percentage vote share in the province from 8% to 13%. The Vryheids Front + (VF+) doubled their percentage share of the vote when they finished with 4% in the Free State, but remained on one seat. The Free State was one of two legislatures in the country, where no party fell out of the legislature, and no new party won enough votes to enter the legislature.

The EFF came within 61 votes of a famous victory in this small town. Smithfield sits on the N6 national road between Reddersburg and Rouxville. It is in the sparsely populated Xhariep district. One of the reasons why the EFF might have done so well in 2016 was because Kgotso Morapela, a former EFF leader in the Free State and former member of parliament comes from this town.

Morapela, who served with Julius Malema in the ANC Youth League, left the EFF and rejoined the ANC. He is campaigning hard for the ANC in this by-election. In an interesting development, the EFF candidate in 2016, Mncedisi Sondiyazi is running as an independent candidate. The million-dollar question is whether he was the reason why the EFF did so well here in 2016, and whether he will garner more support this time round because of his candidacy as an independent. There are pockets of DA and VF+ voters across the ward, especially in Smithfield itself, and the farming voting districts scattered around the ward. It will be worth observing whether Sondiyazi is able to get these voters to back him, and what the turnout will be like in Smithfield and the farming voting districts.

When one considers the 2019 provincial results in the voting districts, which make up this ward, you realise that the ANC beat the EFF easily in Ward 6. They beat them by a margin of greater than 2:1. Will the EFF be able to replicate their strong showing in 2016, or will Morapela’s work with the ANC, and Sondiyazi’s decision to run as an independent cost them? The ANC will hope that Sondiyazi splits the EFF support and that they romp home.

This is the second by-election in Ward 3 since 2016. In 2017, a local party, the United Front of Civics (UFOC) edged out the DA and the ANC in a three-horse race thriller in the northern Free State. This was a former DA ward. On that occasion, UFOC beat the DA by a mere 86 votes, and finished 119 votes ahead of the ANC. Henneman is an island of maize farming and agriculture surrounded by a sea of mining in the Lejweleputswa District. Lejweleputswa includes mining towns like Welkom and Virginia.

Matjhabeng has attracted a lot of negative publicity. This included the Mayor Nkosinjani Speelman insulting coloured residents in Matjhabeng with racial slurs, and the towns in the municipality being affected by regular cuts to their electricity supply because of the municipalities debts to Eskom. Despite these challenges the ANC has a good opportunity to win this ward in the by-election.

Motete Kopela won the ward for UFOC in 2017. The by-election is taking place as a result of his death. He also became active in African Democratic Change (ADeC) in 2019 in the lead up to the election. This is significant because ADeC did very well in Ward 3 on the provincial ballot of the voting districts making up this ward. They finished second here with 28% of the vote, just behind the ANC who got 30%. The DA finished third on 26% as the VF+ ate into their support base winning 9% of the vote. The EFF came fifth here in 2019 with 4% of the vote.

UFOC are contesting again. Will they be a factor in the race, or will they just weaken ADeC and make this into a contest between the DA and the ANC?

The DA are boosted by the fact that the VF+ are not on the ballot. The DA will want to maximise its turnout in Henneman, and get those who supported the VF+ in Henneman and on the farms out for them in the by-election. The DA will also want to ensure that it holds onto the vote it gets in Phomolong.

The ANC will want to benefit from ADeC and UFOC being on the ballot, and hope that some of that ADeC vote share from 2019 goes back to UFOC. The ANC received most of its votes in 2019 at the Phomolong Primary School. They will want to get 60% of the vote and beat the other parties by a wider margin.

ADeC got 85% of the vote at the Phomolong Community Hall voting district in 2019. They also ran the ANC very close at Bahale school. The party knows that it needs to do better on the farms and win over ANC voters in Henneman as well.

It will be hard for UFOC to hold onto this ward. They will need to win back almost all the UFOC voters who lent their vote to ADeC in 2019 and also hope that they win over some dissatisfied ANC voters. It is likely that they will finish fourth or fifth here.

The EFF, ACDP and IFP are also on the ballot.

It has been a very tough year for Olly Mlameli, the former high profile Mangaung mayor. She was first ousted as mayor when the opposition parties collaborated with some ANC councillors and passed a motion of no confidence in her. She was then arrested in connection with the asbestos housing scandal. Will this negative attention on the ANC leadership in Mangaung cost them in this round of the by-elections?

It must be noted that only the ANC and the EFF are contesting in the two Mangaung by-elections. This means that it is plausible for both parties to increase their percentage vote share in the ward.

This part of Botshabelo is on the northwestern side, close to the N8 national road linking Bloemfontein with Maseru.

The ANC won by a very large margin here in 2016. The results here in the 2019 provincial elections largely mirrored the 2016 results for both the ANC and the EFF.

This section of Botshabelo is on the eastern side, in the centre of this large township. Both the ANC and EFF made slight improvements on their 2016 performance when one considers the provincial ballots which make up the ward. The EFF know that their path to more seats in 2019 in Mangaung will run through Botshabelo and they will want a strong showing here.

The ANC knows that they can make a big statement on the road to the local government elections in 2021 with convincing wins in Mangaung, a solid hold in Mohokare and a seat pickup in Matjhabeng. What is unclear is how the EFF and the independent candidate will perform in Mohokare and how the DA, ADEC and UFOC will do in Matjhabeng. There might only be four by-elections in the province, but the races will give us good insight into how the various parties are shaping up. DM

*The proportional representation (PR) ballot results get used here as it is a more accurate reflection of the contesting parties standing in the ward.