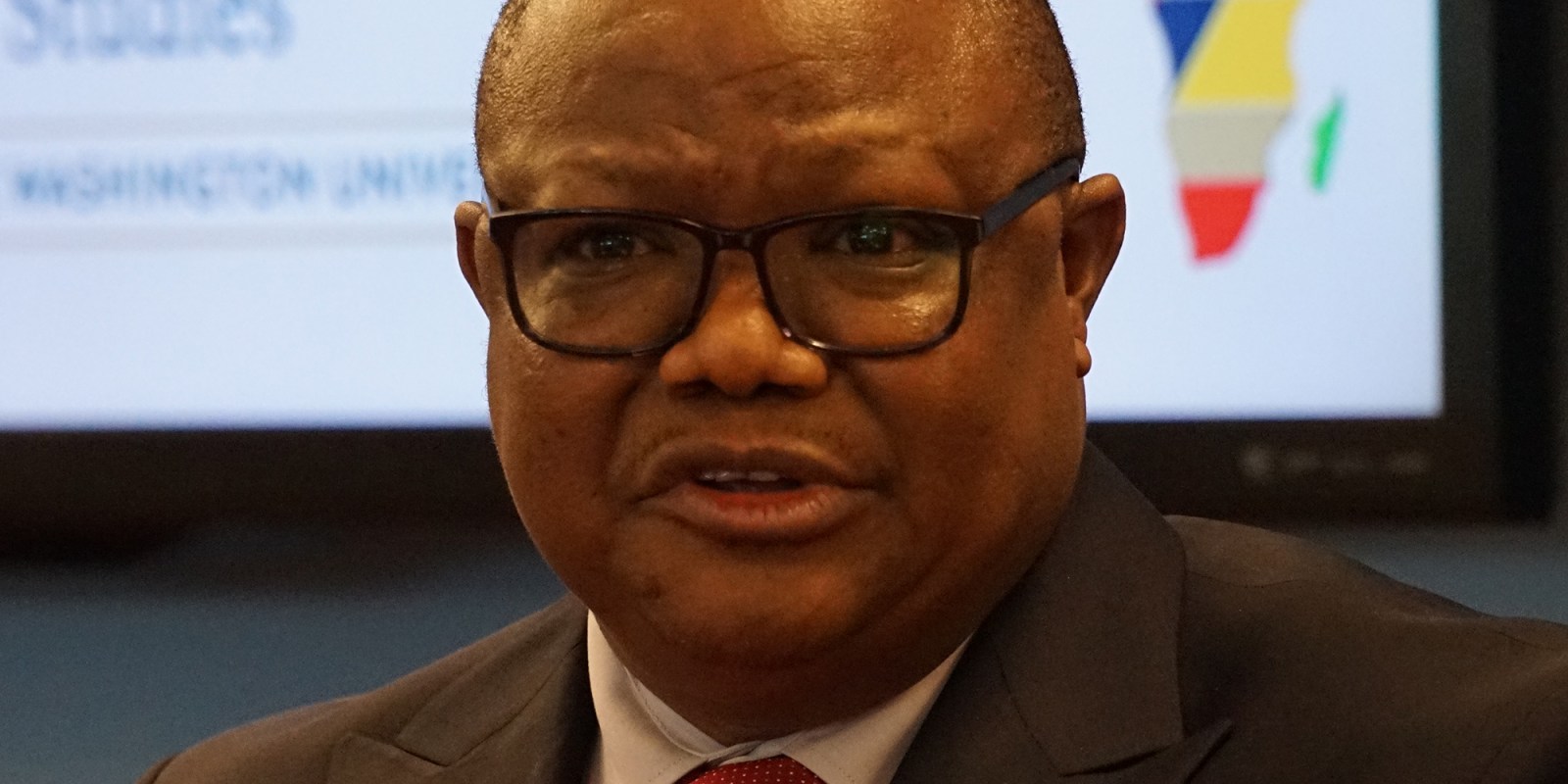 Tanzania's main opposition leader Tundu Lissu’s efforts to evade arrest failed, and he ended up in a police station having to answer questions accusing him of organising a coup. (Photo: Flickr/Elliott School of International Affairs)

The leader of Tanzania’s opposition Chadema party, Tundu Lissu, has asked for safe passage to Belgium after he was briefly arrested on Monday morning following plans to protest against last week’s election outcome.

A Belgian minister down with Covid-19, and diplomatic red tape meant that the leader of Tanzania’s opposition Chadema party, Tundu Lissu’s efforts to evade arrest failed, and he ended up in a police station having to answer questions accusing him of organising a coup.

Lissu, who was on the run on Monday at the same time as other opposition leaders after they organised protests without permission, was waiting in his car in front of Umoja House, a complex that houses the embassies of Germany, the Netherlands and the European Union, and the British High Commission, when the police took him in.

The South African High Commission, incidentally, is just on the other side of the road, but was unlikely to have been able to help due to the diplomatic complications South Africa’s historic ties to Tanzania would have caused.

Just six days before, on Wednesday, Lissu was an opposition presidential candidate in an election that opposition parties, diplomats and election observers say was rigged. President John Magufuli was declared re-elected with 84% of the vote.

Lissu is now hoping to return to Belgium, to where he fled for treatment in 2017 after he was shot 16 times by unknown gunmen in Tanzania’s administrative capital, Dodoma. He returned to Tanzania in July to contest the October 28 presidential elections, but went on the run again soon after the results were announced on Friday and police arrested a number of opposition leaders for planning a protest they could not get permission for.

The resident representative for the Konrad Adenauer Stiftung, Daniel El-Noshokaty, said more than 40 members of the opposition were arrested from Sunday to Monday night, and all of them were charged with economic crimes such as money laundering or tax evasion, which are non-bailable.

At least a car of the German embassy followed him to the police station. He was interrogated and released after about an hour.

On Monday Lissu heard he was next to be arrested, El-Noshokaty said, and considered three options to escape.

“One was to go to the German embassy, because Germany is the chair of the European Union Council until the end of the year, and also because he has the number of the German deputy ambassador [Kathrin Steinbrenner],” El-Noshokaty said. The second option was the US embassy and the third was Belgium, where he still has residence.

“He decided to go to the Germans and texted the deputy ambassador to say he’s on his way to the embassy, but they didn’t let him in. The Americans also told him there’s little they can do, so he didn’t even go there.”

But his decision to go to the Germans caused a diplomatic mess.

“They can’t let him in without the other three [embassies] agreeing,” El-Noshokaty said. “They had to get approval from their headquarters, but they were unable to do so in such a short time.”

Lissu wasn’t looking for asylum, only a safe space, and he was on the phone with Steinbrenner when the police came to arrest him.

“At least a car of the German embassy followed him to the police station. He was interrogated and released after about an hour,” El-Noshokaty said.

The Germans then escorted Lissu to the residence of the German ambassador, Regine Hess, where he spent the night. It was about 7pm when he arrived there. Even though a residence isn’t as protected as an embassy, police made no attempt to arrest Lissu there, El-Noshakaty said.

Lissu’s Belgian option was delayed by the coronavirus, but appears to be back on track. The Belgians said they were expecting a request from Lissu to return, but they needed to have the approval of the Foreign Minister, Sophie Wilmès, to open the gate of the embassy.

“The problem is that the foreign minister is hospitalised with Covid-19 and wasn’t reachable on Monday night,” El-Noshokaty said, but they did manage to get hold of her the next morning.

By Tuesday night Lissu was still at Hess’s home and awaiting word on the request to the Tanzanian government to allow him safe passage to Europe.

“Most European embassies are supporting this, and also the United States,” El-Noshokaty said.

A fellow party member from Zanzibar, Ismail Jussa, could on Tuesday not access medical treatment in Nairobi, Kenya, as government officials told him they needed to get approval from higher authorities before letting him pass through passport control.

Rumours that the German government put pressure on the Tanzanian government after, in turn, being pressured from within, don’t seem to hold water. German Foreign Minister Heiko Maas happened to have been in a meeting with the Konrad Adenauer Stiftung at the time and the issue of Lissu was raised, so he was informed.

Lissu’s release, however, had nothing to do with pressure from the German government, from which Tanzania still receives significant amounts of aid money.

Meanwhile, another opposition leader, Zitto Kabwe from the ACT-Wazalendo party, was arrested and released again on bail on Tuesday after being charged with “planning, organising and directing unlawful protests”, according to a statement by his party.

A fellow party member from Zanzibar, Ismail Jussa, could on Tuesday not access medical treatment in Nairobi, Kenya, as government officials told him they needed to get approval from higher authorities before letting him pass through passport control.

“They waited until the scheduled flight departed for Nairobi before saying that Ismail could pass through,” a statement by his party said. He suffered a broken shoulder, a broken leg, and significant bleeding after being beaten while in custody last Thursday, and had been in hospital since. The party said he will attempt to go to Nairobi again on Wednesday.

Meanwhile, the Economic Freedom Fighters in South Africa issued a statement in which it asked Magufuli to respect the right of opposition parties to protest. This followed a statement by President Cyril Ramaphosa congratulating Magufuli on his re-election.

ANC spokesperson Pule Mabe said the ANC was likely to release a statement on the election by Wednesday. The former liberation movement has fraternal ties with Tanzania’s Chama Cha Mapinduzi governing party. DM