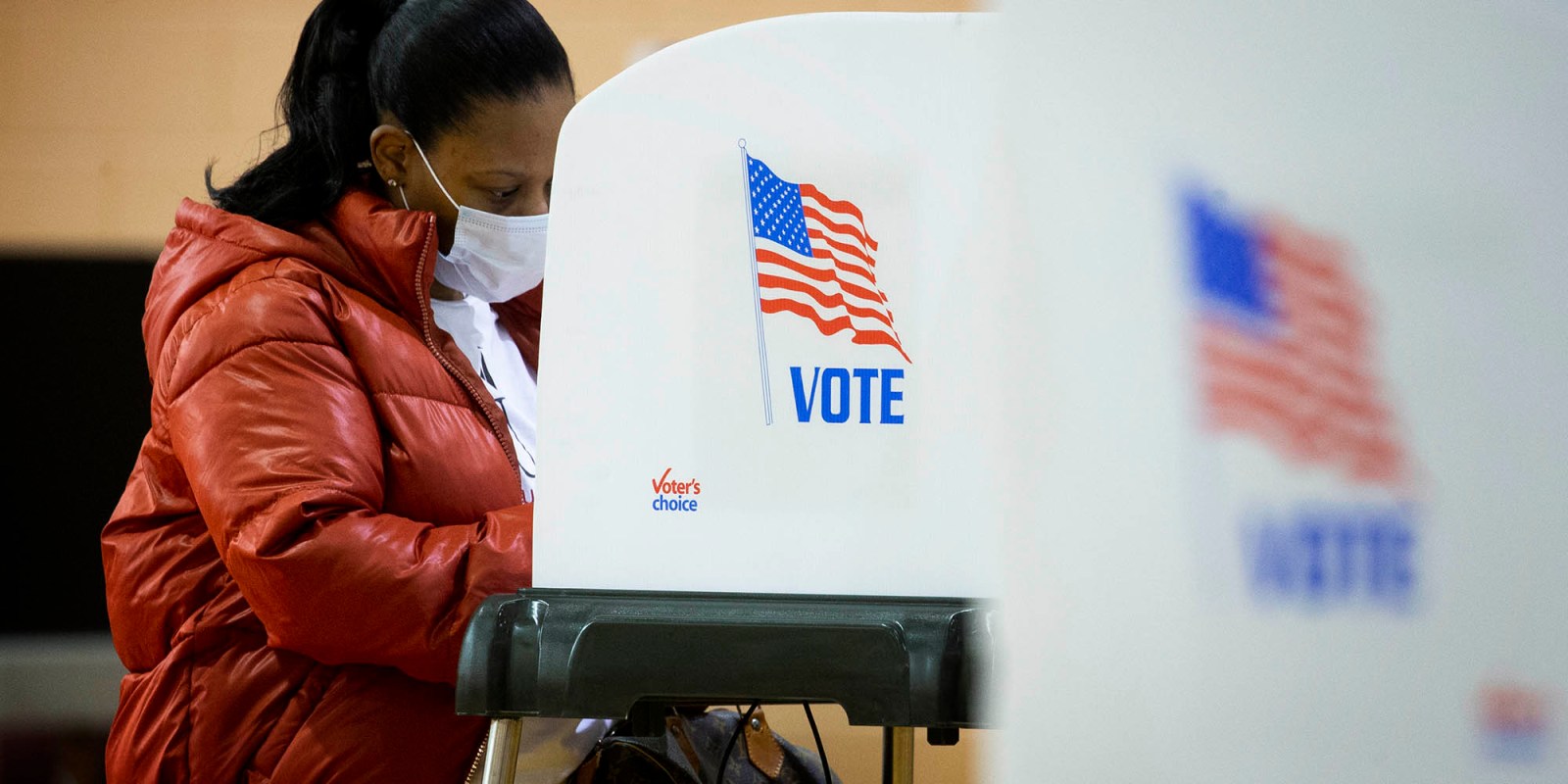 A citizen at a voting booth prepares to cast a paper ballot at a polling location in Bowie, Maryland, USA, on 2 November 2020. (Photo: EPA-EFE/MICHAEL REYNOLDS)

While the US has shattered all previous early voting records, with 98 million votes already cast, the White House late on Monday got an additional ‘unscalable’ fence to keep protestors out.

Some businesses in  New York, Washington DC and Los Angeles have boarded up shop windows in anticipation of violence as a nervous America prepares for US Elections 2020 on Tuesday, 3 November.

In Washington DC, at the White House late on Monday, Federal authorities erected an additional, higher fence around the perimeter of the building’s grounds. This is in anticipation of protests on voting day. ShutDownDC, a coalition of activist groups, together with Black Lives Matter have announced a week of protests planned to start on election day from 4pm with a gathering at Black Lives Matter Plaza, a block away from the White House.

ShutDownDC’s website says that they use “strategic direct action to advance justice and hold officials accountable.” They also offer “de-escalation training” which their website says will “help participants understand their risk tolerance and communicate their boundaries so they can go into protests with confidence in themselves and their community”.

We’ve been training, researching and organizing for months and now that election day is just around the corner. Here’s our plan (thread): https://t.co/hS9PIAxIod

A number of protests are expected around the White House and some 20 surrounding streets have been closed to traffic on Tuesday and Wednesday. In anticipation of possible election day violence, 250 National Guardsmen have also been put on standby.

Chief of the Metropolitan Police Department, Peter Newsham, at a media conference on Thursday said: “We want to make sure that everyone has an opportunity to vote… If somebody’s interfering with somebody’s ability to vote, we take that very seriously, they will be warned and if it persists they will be taken into custody.

“With regards to election day, yes I do have concerns. We have seen a lot of unrest across our country and some here in Washington DC. We will have the entire police department working on that day and the days that follow.”

Newsham added: “We do not have any credible threats right now of violence, although we do have a number of folks that have applied for permits to demonstrate here in the city… We welcome people to come here to the district of Columbia and to exercise their first-amendment right, but we are not going to tolerate any violence or unrest and lastly we ask anybody if they do see something, to please say something to law enforcement.”

In the state of Massachusetts, Governor Charlie Baker put 1000 members of the National Guard on standby.

With some 98 million votes already cast by midday on Monday, 2 November, predictions are that some 150 million votes will be cast in total.

Another standout feature of the 2020 US election is that more young people have registered to vote than in 2016 and more young people have voted early.  At least two analyses of early and mail in voting, one of them by Tufts University’s Centre for Information and Research on Civic Learning and Engagement (Circle) shows that seven million Americans aged 18 to 29, have already cast their ballots.

Political commentator Tara Setmayer and Deep Root Analytics CEO Sarah Fagen, speaking on Nightline, were in agreement that the youth vote would work in Biden’s favour.

Fagen said: “Over the course of the past 20-some years, young people have tended Democratic and by higher numbers so that will benefit Biden – I think that is a long-term problem that the Republican party has to address.”

Setmayer agreed: “Traditionally 18- to 29-year-olds have a lower propensity to vote, but this time around we are looking at a lot of first-time voters, voters who have grown up in the era of Parkland and school shootings. They are motivated; they’re out there voting in exponentially higher numbers than they have in the past, particularly in places like Florida, Michigan and Texas. So it definitely advantages Biden.”

The relatively small (population 1.059 million) state of Rhode Island started counting votes on Monday 2 November, with the election just hours away. The Ocean State said they were expecting a turnout of 73%.  The state had a total of  782,693 voters in 2016 with 60% casting their ballots.

Then, sitting on the US-Canada border is the tiny town of Dixville Notch with a tradition of voting right after midnight on election day. Once all five registered voters have cast their secret ballots, they count and announce their results – making them one of the first districts in the US to report.  All five votes went to Biden.

It is clear that Americans are determined to make their voices heard by means of the ballot box. Or to quote Democratic presidential candidate and challenger Joe Biden who at the weekend told supporters that  “… the American people won’t be silenced.” DM

An Wentzel is Night Editor, specialist reporter for Daily Maverick, she went to the US to visit family as the pandemic struck and is currently marooned in the land of the “free”.