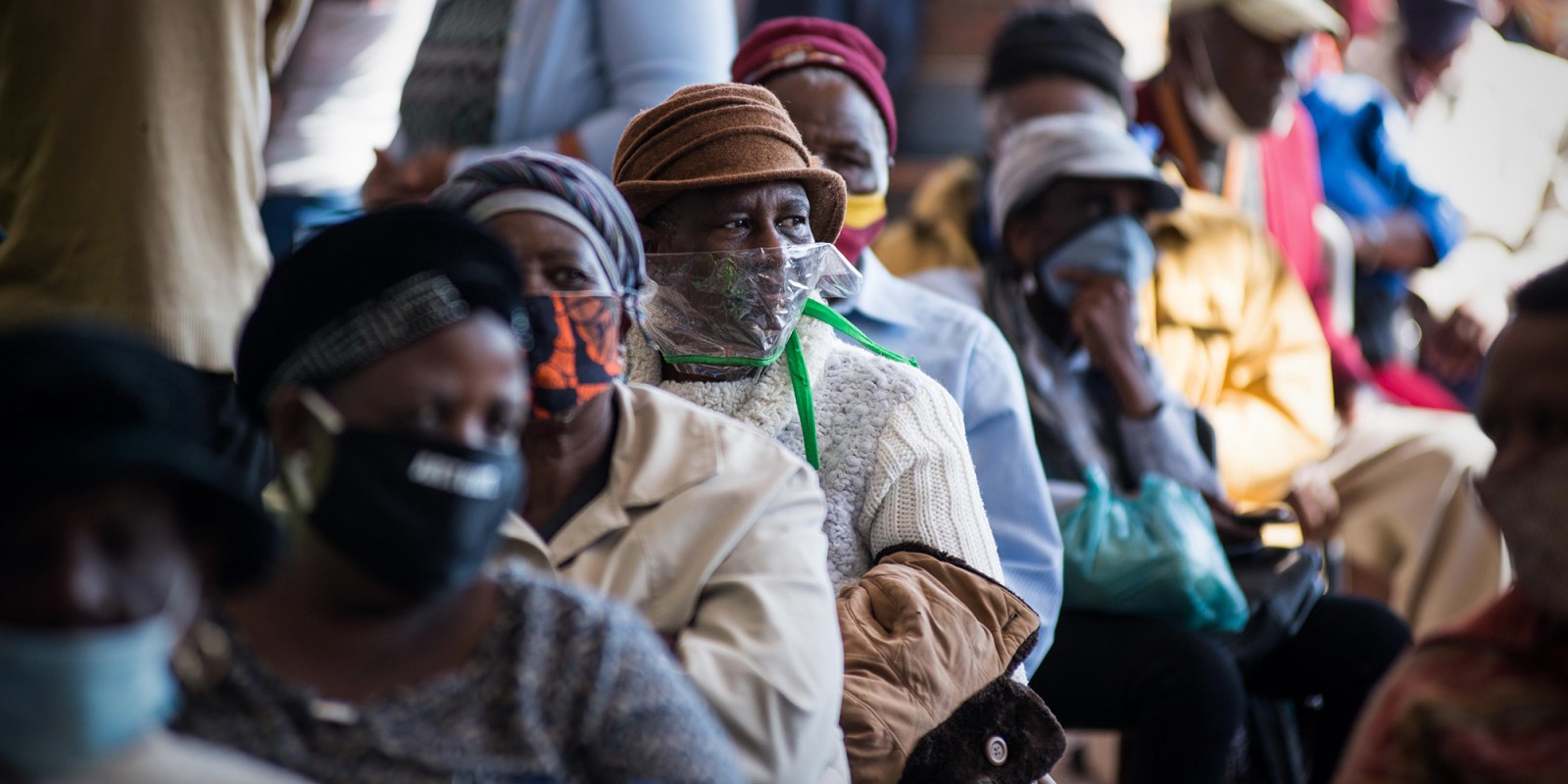 Senior citizens queue for their monthly social grants outside Jabulani Mall in Soweto on 4 May 2020. (Photo: Gallo Images / ER Lombard)

The Pretoria High Court on Friday struck from the court roll an urgent application by the Black Sash Trust to prevent the South African Social Security Agency from cancelling the R500 top-up grant for caregivers during lockdown. The decision comes as the United Nations Development Programme published a report with devastating findings on how the outbreak of coronavirus infections and the lockdown impacted on the most vulnerable communities in South Africa.

An application by the Black Sash Trust to stop the South African government from cancelling the R500 top-up caregiver grant was struck from the court roll on Friday after the judge ruled that the matter was not urgent.

Grant payments for November will revert to pre-lockdown amounts. The trust asked the court to stop the cancellation of the grants pending a further application to have the decision to do so reviewed by a judge.

The court ruled that the matter, heard virtually, should not be open to the media or the public.

Centre for Applied Legal Studies attorney Ariella Scher said the court had recognised that the application was brought on behalf of the most vulnerable people in society and was in the public interest. As a result, no cost order was made.

The matter was heard by Judge Nana Makhubele. In October 2020, the Judicial Service Commission had advised President Cyril Ramaphosa to suspend Judge Makhubele until a judicial conduct tribunal had decided whether to recommend she be impeached for gross misconduct for continuing in her role as the chairperson of the Passenger Rail Agency of South Africa board after she had been appointed as a judge.

“We are obviously disappointed in the outcome of today’s hearing,” Scher said. “It is particularly discouraging that in the week that the caregiver grant is being brought to an end, the minister of finance announced yet another bailout for South African Airways, this time for R10.5-billion. The amount would have been enough to continue paying grants for another three months,” she said.

The national director of the Black Sash Trust, Lynette Maart, said the top-up grant of R500 per caregiver had proven to be a lifeline to many during this “unprecedented time of hardship and suffering”.

“By terminating the caregiver grant prematurely, government has failed to protect the people hardest hit by the current humanitarian and economic disaster,” she said. “We are also very concerned about the fact that this hearing was closed to the media and the public,” Scher said. “No reasons were provided for this decision, which goes against the principle of transparency. Virtual proceedings should make our courts more accessible, not less so,” she added.

The trust launched the court application late last week, arguing that the R500 caregiver grant is a vital measure to assist the most vulnerable of people in South Africa during an “unprecedented time of distress” with food and shelter.

The South African Social Security Agency announced in the last week of October on social media that the R500 top-up grant for caregivers and all other top-up grants “have come to an end” and that November’s grants will revert to pre-Covid figures. Payment of the R350 Social Relief of Distress Grant has, however, been extended.

“As we understand it, this top-up is a new form of social security that cannot come to an end until the state of disaster is lifted or the devastating impacts of the pandemic have been reversed. This date is certainly not Saturday 31 October 2020,” Scher said.

Maart said the cancellation of the grant will affect more than seven million beneficiaries.

“[They] will be denied relief from the social and economic hardship and suffering brought on by the pandemic – all while the state of disaster remains firmly in place,” Maart added.

The cancellation of the caregiver grant comes as the United Nations Development Programme published a report highlighting the devastation caused in the country by the Covid-19 outbreak and the lockdown measures.

The report assessed the rapid emergency needs in South Africa.

According to the researchers, the food security of 8.2 million people who already lived below the food poverty line before the pandemic is likely to be highly compromised and food insecurity is likely to be especially dire for the 900,000 households that had severely inadequate access to food before lockdown.

“In addition, the nutrition status of nine million children is compromised without access to school feeding, with a risk of acute malnutrition or wasting among these children,” the report stated.

The report further cautioned that an estimated 741,000 informal workers were at risk of falling below the upper poverty line and would be especially vulnerable without social assistance.

“These are the people who were at the edge of poverty, but not considered poor before the pandemic. It is likely that the population at risk of falling below the poverty line is higher, and that those at risk of falling into extreme poverty are highly vulnerable.”

The statement cautioned that the cancellation of the special Covid-19 grants, including the top-up grants, will cause a humanitarian crisis with the organisations estimating that 6.8 million people would be plunged below the food poverty line.

The report added that an estimated two million poor children did not receive the Child Support Grant before the Covid-19 outbreak due to exclusion errors or factors and that about 2.5 million informal workers in micro-enterprises would likely need grants to ensure their own food security and find a way to restart their businesses.

“Food and nutrition security is compromised for vulnerable populations due largely to constraints on people’s access to food, including the drop in people’s purchasing power due to income loss and the rising cost of the household food basket.

“Some households are seeing lower food stocks in local markets and report that they are eating less to cope. The current situation could lead to a spike in hunger and malnutrition.

“Among the most vulnerable are the 8.2 million South Africans who were already living below the food poverty line before the pandemic and therefore could not purchase or consume enough food to meet their minimum per-capita-per-day energy requirement for adequate health.

“In the coming weeks and months, food and nutrition security will depend largely on food access which is influenced by food inflation, local food stocks, grant allocations and the measures taken to target the most in need,” the report stated.

In a statement signed by 106 civil society organisations, the C-19 Coalition has called for the extension of the R350 grant and caregiver grants for five months until the end of the financial year, but also increasing both grant amounts to the food poverty line of R585 a month.

The statement cautioned that the cancellation of the special Covid-19 grants, including the top-up grants, will cause a humanitarian crisis with the organisations estimating that 6.8 million people would be plunged below the food poverty line.

“Based on available estimates and assumptions of 5.6 million and 7.1 million respectively (at current levels of access), the extension of the [R350] grant and caregiver grant per month will cost a combined R37-billion. At a fraction of spending proposals under consideration, this is a clear test of whether the government puts the interests of capital before people,” the statement continued. DM/MC