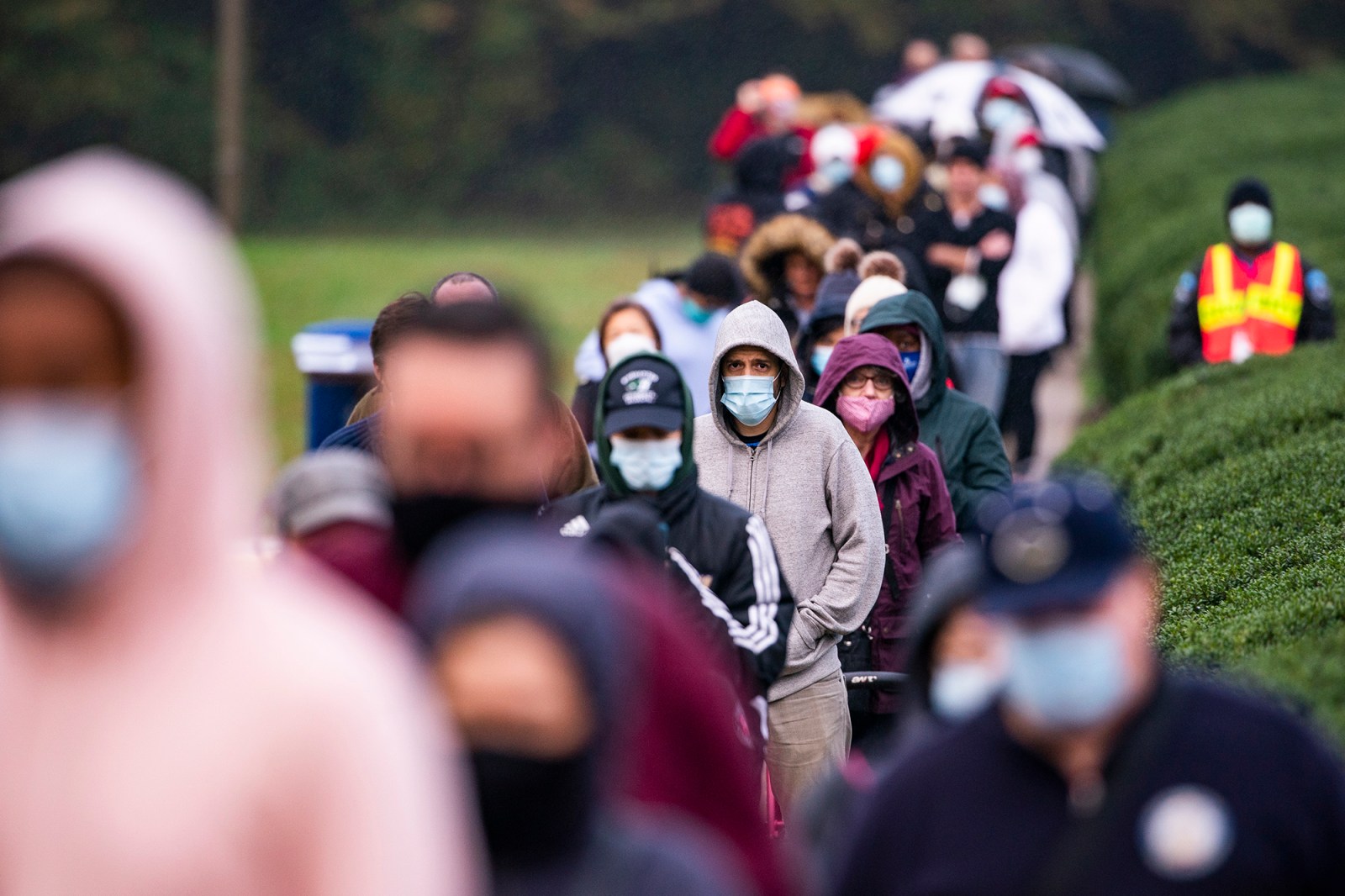 Voters wait in a light rain to cast their votes for the 2020 presidential election at the Fairfax County Government Center in Fairfax, Virginia USA, 30 October 2020. Early voting in Virginia, which began on 18 September, ends on 31 October. EPA-EFE/JIM LO SCALZO

Like South Africans did in 1994, Americans are turning out in record numbers to cast their votes in 2020. Many of the people queueing in rain and in defiance of coronavirus risks, are driven by a slow-dawning realisation of how lopsided the polling system is, how captured by local partisans, how vulnerable, how mired in a legacy of racism.

It was a Wednesday, 27 April 1994, and in Mowbray, Cape Town, it rained softly on the line that stretched along the Liesbeek parkway from the polling place at the Gordons sports center. Buses arrived from the Cape Flats, where voting was even slower, swelling the crowd. We chatted and sheltered under bits of plastic, a game of rugby broke out in the drizzle. It was seven hours before we made it inside, and I lingered in the cardboard booth, making my mark in soft pencil, going over the lines to draw them thick and dark and unmistakable, but also to prolong the act of choice and consent that for the first time truly felt like citizenship.

In Brooklyn this week, it rained too, gentle and steady, on the socially distanced lines of early voters taking no chances with the pandemic, with the postal service, with their work schedules.

New York State is not in play in this presidential election, which means we see only a fraction of the political advertising that is bombarding Pennsylvania, Wisconsin and Florida, and no visits from candidates. Ballots are unlikely to be much contested here, as they almost certainly will be in battleground states, by Republican officials and activists anxious to exclude from the count the postal and early votes they think will favor Joe Biden and Democratic candidates down the ticket. And yet the voters of New York lined up in their thousands, damp and masked.

“Vote!” exhort the signs in my neighbours’ windows. “Vote!” say the sandwich boards outside the coffee shop and the menswear boutique. “Vote!” say the skiers and cyclists in my Instagram feed, and the activists and parents, and artists. “Vote!”

Black Americans have always known the system was rigged against them. For whites, it was easy not to know, or simply not to care very much. Trump may have changed that for good by seeking to keep it that way.

Turnout in US elections has hovered around 55% of the voting-age population for a generation. The last time it nudged 60% was in 1968, the election perhaps most like this one in terms of its stakes, and of the issues in play. Those abysmal numbers suggest to many outside of the US a blithe carelessness with the country’s democracy, a sense that Americans take for granted their rights and freedoms, or don’t expect the alteration between parties to trouble their interests enough to get them to the polls.

The truth is much darker, and it is on naked display this election in a way that may at last bring sustained pressure for fundamental reforms in the voting system.

Around five million adult citizens are affected by state laws that disenfranchise convicted felons, often permanently. In the crucial battleground of Florida, where voters overwhelmingly agreed in 2018 to end the practice, Republican lawmakers gutted the change by imposing requirements that felons pay all outstanding fines and fees before they can have their rights restored. That probably leaves some 750,000 unable to vote in a state that could be decided by a much narrower margin.

These laws, of course, are the living embodiment of Jim Crow, created and now maintained in order to ensure that black voters are excluded.

There are others. Voter identification laws, on the books in 36 states, disproportionately affect people of colour and the poor. According to the American Civil Liberties Union, 25% of African Americans of voting age lack government-issued photo ID, compared to just 8% of whites.

A whole thicket of other barriers set up to limit participation was the explicit target of a 1965 voting rights act, the landmark Civil Rights Law that aimed to end racial discrimination in voting and fully realise the post-Civil War 14th and 15th Amendments to the US constitution. Conservatives have long chafed at the law, which contained crucial provisions to increase scrutiny of states and counties with an especially egregious record of suppressing black votes. In 2013, a Supreme Court that was already leaning right struck down that part of the act, depriving advocates of crucial tools for fighting voter suppression.

There are softer measures too. Elections take place on the Tuesday following the first Monday in November, and voting day is not a public holiday. For many, that can mean choosing between voting and wages, or even keeping your job.

For those who make it through the doors of a polling place, the design of the senate, and above all the electoral college system, conspire to devalue votes from America’s diverse cities and coasts, and to elevate those of whiter and more rural parts of the country.

Seen through that lens, turnout looks very different. And so does Donald Trump’s relentless attack on the integrity of the electoral system, which is being abetted by local officials and, in some cases, courts, even as polls overwhelmingly predict a Biden victory.

Black Americans have always known the system was rigged against them. For whites, it was easy not to know, or simply not to care very much. Trump may have changed that for good by seeking to keep it that way.

Americans are voting right now as if their lives depended on it. And their democracy. By Wednesday, 70 million had cast ballots, more than half the total turnout in 2016. Some of that is down to the need to limit exposure to Covid-19 as cases surge to new highs in some of the most contested parts of the country. Some of it is down to passionate commitment to Trumpism, too. But much of it is driven by a realisation, now dawning much more widely, of how lopsided the system is, how captured by local partisans, how vulnerable, how mired in the legacy of racism.

To line up in the rain to vote in safely blue Brooklyn, or to risk infection in a swing state, is both to assert and to celebrate the unrealised idea of a full American democracy even as the president and his party strain every sinew to curtail it.

We had three days to vote in South Africa in 1994, and by the third it would be the work of five or ten minutes, but we went to queue on the first, not only because we had waited too long for democracy, but because we wanted to participate in this great national ceremony of liberation and of binding to a constitutional order.

And so I know how my US neighbours feel, in this very different moment of theirs. I hope with all my heart they get it right. DM

Nic Dawes is the former Editor of the Mail & Guardian. He now lives in New York where he was until recently Deputy Executive Director of Human Rights Watch.