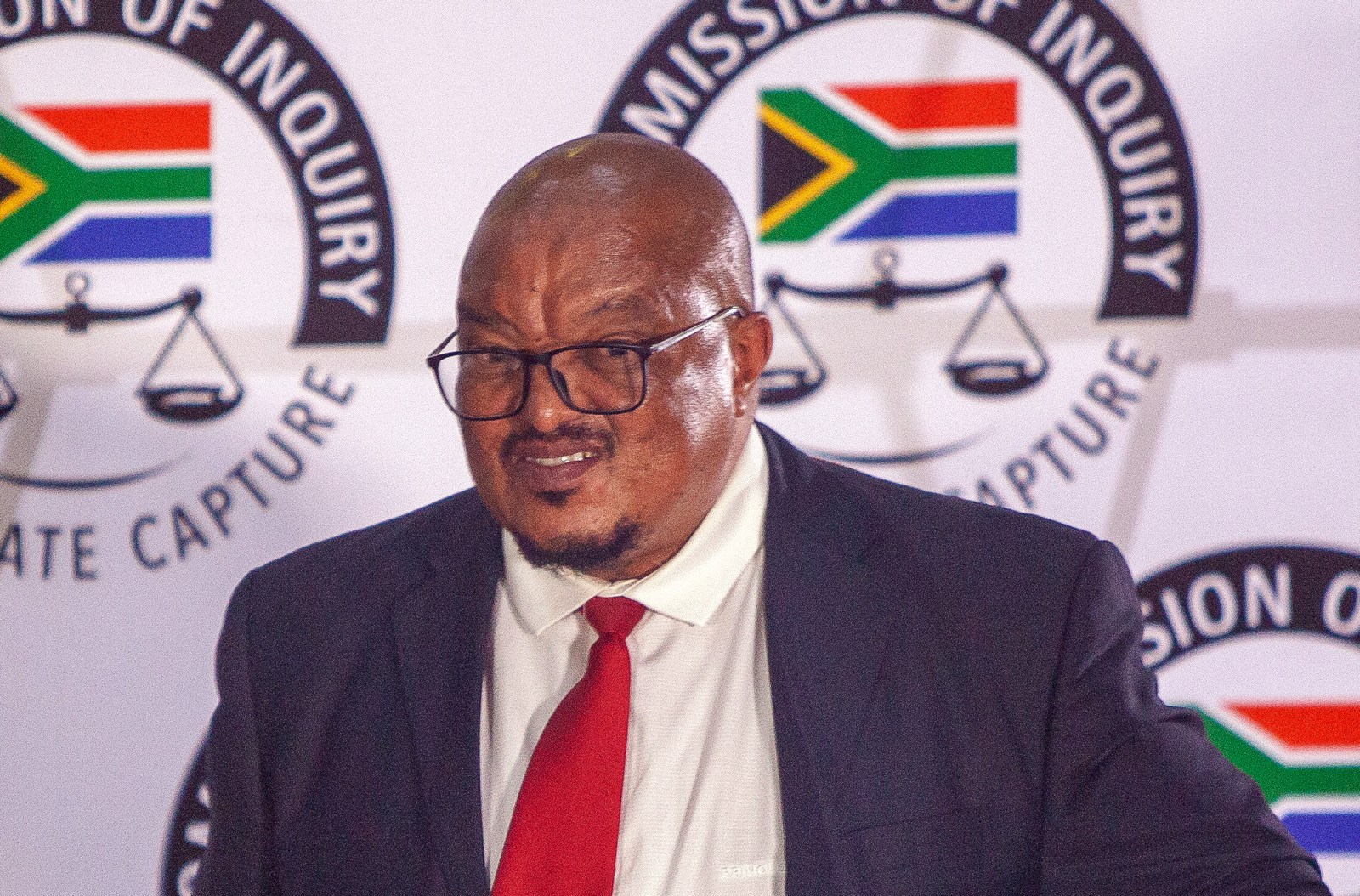 In appointing VR Laser to produce 183 platform hulls in 2014, Denel flouted its own policies. It made little sense to contract an outside company at a premium when a Denel subsidiary was capable of doing the work for less.

Politically connected VR Laser swiftly rose through the ranks of Denel suppliers after clinching a multimillion-rand contract in 2014.

The company advanced on several divisions of Denel, following a 74.9% takeover by Gupta lieutenant Salim Essa.

Top brass at the government arms company, including two former CEOs, are alleged to have aided and abetted VR Laser’s irregular appointment at Denel’s expense.

VR Laser won a multimillion-rand Denel contract in 2014 when it should not have been in the running. Denel owned a capable subsidiary.

Hoefyster translates as “horseshoe” and the project was indeed a shoo-in for VR Laser and its influential (albeit hidden) shareholders.

VR Laser’s CEO allegedly declared that the Guptas and Duduzane Zuma were shareholders during a meeting in 2016.

I am struggling to turn a blind eye to this phenomenon.

The following day, Malahlela reported the claimed admission in an email to the CEO of DLS, Stephan Burger. She alerted Burger to media reports accusing the Gupta family of State Capture.

Malahlela said Denel was at risk of exposure if its partnership with VR Laser continued. “I am struggling to turn a blind eye to this phenomenon,” she wrote.

Based on what Van der Merwe allegedly told her, Malahlela asked Burger to review the agreements DLS held with VR Laser.

She wrote, “The current CEO of VR Laser has acknowledged their ties with the Gupta family and the president’s son [Duduzane Zuma] through indirect shareholding.”

Two years earlier, however, Malahlela accepted VR Laser’s flimsy replies to Denel queries about who exactly was behind the business.

Dennis Mlambo, former procurement executive at Denel, claimed seniors were kept in the dark about the 2014 platform hull contract.

He was troubled by absent evidence about the ownership of VR Laser.

“I wanted to know exactly who that individual black woman was, but to this day I never got an answer,” said Mlambo.

Mlambo corresponded with the VR Laser MD JP Arora and VR Laser COO Benny Jiyane in an effort to identify the business’s shareholders.

“They are the shareholders, they don’t have any conflict doing business with Denel, all the shareholders are private individuals with no connection to government,” Jiyane assured.

Malahlela of DLS was satisfied with the shareholders that VR Laser declared on paper. “With this document… if they had lied we could terminate the contract,” she said.

A senior at Denel expected far more. Mlambo said, “The key issue was actually establishing the shareholders of VR Laser, the individuals behind the companies.”

Mlambo complained about receiving the name of yet another company when he asked Arora to identify Craysure Investments’ shareholders.

“They kept on telling you about entities, not individuals,” noted Zondo.

“I didn’t want to know the corporate shareholders, I wanted individuals, because BBBEE certificates actually base their assessment on the individual shareholders,” said Mlambo.

“You have to unpack that. You can’t simply accept that Westdawn is 100% black-owned when you don’t have that evidence.”

Zondo read an email from Arora to Mlambo dated Tuesday 4 November 2014 in which he identifies Essa as Elgasolve’s shareholder.

“Why didn’t he think it was equally important to give the identity of individuals in regard to the other entities?” asks Zondo.

“There were some serious issues, I suspected. Under normal circumstances this kind of information was readily available,” said Mlambo.

VR Laser’s true owners were secret and its BBBEE certificate was pending when it submitted a bid to Denel in 2014.

It just didn’t make sense. It means the quote was inflated in the first place and that suggested that something anomalous was happening with this transaction.

In appointing VR Laser to produce 183 platform hulls in 2014, Denel flouted its own policies.

It made little sense to contract an outside company at a premium, when a Denel subsidiary was capable of doing the work for less.

To make matters worse, Denel had reportedly bought a majority in the relevant subsidiary, Land Mobility Technologies (LMT), with the Hoefyster Project in mind.

In 2011 LMT was streets ahead of Denel when it came to armoured vehicle design, manufacture and assembly.

At the time that Denel bought a 51% stake, LMT boasted existing contracts in the Middle East (where Denel was keen to develop business).

Mlambo thought it was a no-brainer: in line with Denel policy, LMT must produce the platform hulls.

“I saw no reason we should even debate the issue about giving work to a group division or subsidiary. To me, it’s just common sense. It must be done,” he said.

Mlambo insisted the platform hull work should not have gone out on open tender, since Denel had a subsidiary capable of doing the work.

When the 2014 contract went out on tender, LMT submitted a bid. It was almost R100-million cheaper than VR Laser’s initial offer and yet VR Laser got the job.

Amazingly, Denel quibbled LMT’s figure as being “too low”, so CEO Stephan Nel offered to explain the price, and LMT manufactured the prototype of the platform hull Denel wanted.

For its part, VR Laser offered to reduce the quote by a whopping R67-million from R262-million to R195-million, which set off an alarm for Mlambo.

He said, “In a normal business, I can’t imagine a company that is well run and does proper costing just simply lopping off R67-million from a R262-million quote in one fell swoop.

“It just didn’t make sense. It means the quote was inflated in the first place and that suggested that something anomalous was happening with this transaction.”

According to procurement policy and law, VR Laser could not amend the bid price at this stage in the procurement process. Documents show DLS CEO Burger transgressed Denel protocol to help politically connected VR Laser lower its offer.

“The process lost credibility right at the outset,” said Mlambo. Without Mlambo’s approval, as required by law, the then Denel CEO, Riaz Saloojee, approved the multimillion-rand deal with VR Laser.

An incensed Mlambo said it was a forgone conclusion that VR Laser would get the business. “The outcome thereof was totally unacceptable. It should have been rejected on any grounds by anyone,” he said.

Saloojee’s successor approved an exclusive (and irregular) contract with VR Laser in 2016, when it became the sole supplier of certain parts to DLS.

This gave VR Laser a monopoly on the supply of fabricated parts and steel components to DLS, over and above the parts for the Hoefyster Project, for a 10-year period.

“Ja, it is also one of those dodgy contracts that they entered into and to my surprise at the time it was Zwelakhe Ntshepe who was the Group CEO,” said Mlambo.

He raised his objections: VR Laser could only obtain the sole supplier status if it was proven Denel entities could not supply the parts or delivery deadlines were in jeopardy.

While much of Wednesday’s sitting covered the devil in the detail of Denel’s contracts with VR Laser, there was a lighthearted moment when Zondo joked with Mlambo.

The presiding officer, evidence leader and witness all happened to be wearing red ties. Zondo declared the coincidence, insisting there had been no consultation on the topic.

Testimony on Denel resumes at 10am on Thursday 29 October. DM