Business mogul Tokyo Sexwale raked in R7.5m in directors’ fees from the now defunct Gupta-linked Trillian Capital Partners.  Roughly 60% of this income was paid to him after an explosive October 2016 whistle-blower report publicly revealed that Trillian’s owners allegedly had prior knowledge that Jacob Zuma was about to fire Finance Minister Nhlanhla Nene, and had planned to cash in on it.

Trillian Capital Partners had all the frills: designer décor, an in-house barista and company letterheads boasting the name of a South African business luminary. At R500,000 a month, Tokyo Sexwale was the company’s biggest earner. But it remains utterly astonishing how State Capture’s villains – Trillian owners Salim Essa and Eric Wood – were able to fool one of the country’s boardroom giants so spectacularly. Or, why Sexwale continued to draw his monthly pay cheque for eight months after the company’s Nenegate secret was exposed.

Sexwale drew his R500,000 pay cheque each month between November 2016 and July 2017, when he resigned upon the release of a report by senior advocate Geoff Budlender.

As then non-executive chairman of Trillian, that investigation gave Sexwale great cover and massive anti-State Capture kudos. His move fast-tracked the unravelling of Trillian and exposed the company’s off-grid ties to global consulting firm McKinsey & Co, which had led to a tainted R1.6-billion deal at power utility Eskom.

Sexwale has constantly sought to emphasise that he had no knowledge of what Trillian’s owners, Gupta kingpin Essa, or Wood, were up to.

He publicly resigned on the day the Budlender findings were released in mid-2017.

But boarding that Trillian ship has left Sexwale with major seasickness and it is not hard to understand why.

These are the 10 red flags that erupted or existed around Trillian when Sexwale signed up:

It was a week after that cracker article by amaBhungane, when on 23 October 2016 the Sunday Times published an article titled “The Dark Heart of State Capture”, that Sexwale initiated the Budlender investigation.

While he has really been able to highlight this move in his defence, it is becoming clear that there are more questions than answers about it.

On Monday October 26 2020, it emerged that 20 civil society organisations had, in an open letter to the State Capture Commission chairman, Deputy Chief Justice Raymond Zondo, asked that Sexwale be among crucial witnesses who must be called to testify.

The National Prosecuting Authority (NPA), the South African Revenue Service (SARS), Eskom, Transnet and one of its pension funds are all trying to claw back or preserve a slice of an insolvent Trillian pie.

And multiple investigations have deemed the overwhelming bulk of Trillian’s income to have emanated from the tainted Eskom deal that resulted in McKinsey paying back more than R1-billion.

Daily Maverick asked Sexwale, in view of all that has happened with this company, if he would repay the fees he earned from Trillian.

In an initial response to questions, Sexwale said he joined Trillian in April 2016 because there had been no negative publicity or scandals surrounding the company.

His pay, Sexwale said, was totally above board and market related for “a businessman of his stature”.

As for repayment of the Trillian fees he earned, Sexwale said he would be guided by legal instruction from a court of law.

In round two, when Daily Maverick asked how Sexwale had missed highly damaging media reports by the Sunday Times and amaBhungane about the various scandals that engulfed Trillian and Essa, the response from his office was slightly more terse.

“Irrespective of whatever gossip or media speculations at whatever time, Mr Sexwale acted decisively and unapologetically when he appointed Advocate Budlender’s transparent investigation long before there was ever the State Capture Commission by Justice Zondo.”

Sexwale, who had previously served as trustee of the Nelson Mandela Foundation for two decades, was also unimpressed with Daily Maverick’s enquiry into what had made him join Trillian.

And by April 2016, Essa and the Guptas were engulfed by one devastating exposé after another; Absa, Standard Bank, FNB had terminated their bank accounts and Sasfin, JSE sponsor of their Oakbay Resources, had already pulled out.

The Guptas were in deep trouble and so was Essa, Trillian’s majority shareholder.

But Sexwale was oblivious. That same April (2016), the Mail & Guardian ran a cover story headlined: “What the Gupta guards saw,” an anecdotal piece about high-profile visitors to their Saxonwold mansion.

The article quoted some of the guards saying Sexwale was not treated like other VIP visitors, that instead of him going to the Gupta compound, Ajay Gupta would personally call on Sexwale at his then Sandhurst home.

But when the reporter contacted Sexwale’s office for comment, there was no response.

Instead, in a masterstroke that somewhat mitigated against being named, Sexwale penned an open letter to his “friend” Ajay Gupta, and elected to have it published by a different publication (ironically, it was Daily Maverick) on the evening before the Mail & Guardian hit the streets.

An open letter to Ajay Gupta: Lessons for business-government interactions

In that letter, Sexwale spoke to the Gupta patriarch and of their “visits” to each other’s homes.

The tone of the letter was intimate, a missive from one buddy to another about the state of the country, the beast of corruption and how the Gupta name had been dragged into it all. Wrote Sexwale:

“Clearly, you have not yet captured our vibrant and firebrand-filled Parliament, let alone the judiciary, especially our fiercely independent apex court. Thus, the thrust of the accusations and allegations against you is that of undue influence – real or perceived – over some ministers and government, or parastatal officials.

“Vehement denials have followed from your side. So, a body is needed – the body of evidence. The Public Protector has been requested to investigate unencumbered. Your assistance is important. Meanwhile, the jury remains out.”

If everyone else had made the Gupta connection to Essa’s Trillian, it totally escaped Sexwale, as his open letter made no mention of his then very fresh foray on to the company’s board, just three weeks earlier.

In fact, by then he had hoped the company would be prepared to pay him a full R1-million a month. 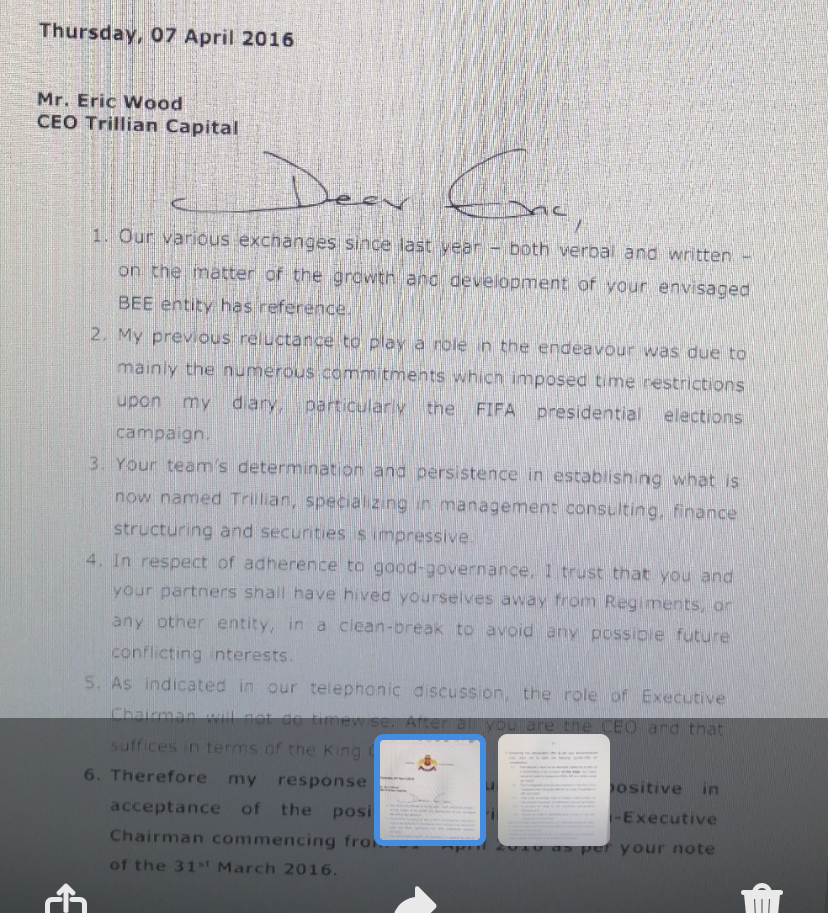 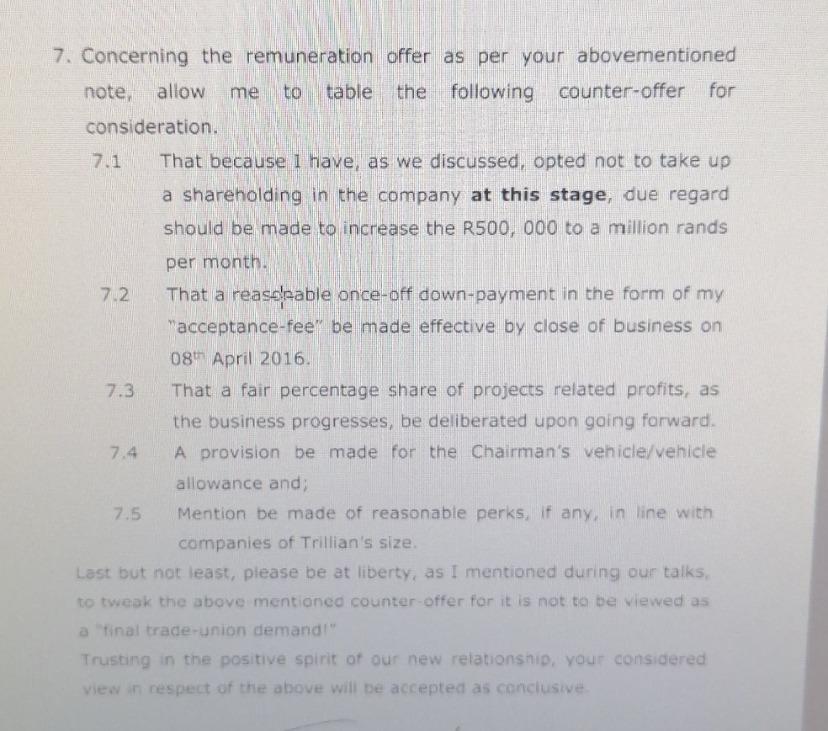 For the next six months, an apparent oblivious Sexwale drew his Trillian salary – the former Absa bank director too fresh at Trillian to even have realised that Absa had frozen one of the company’s bank accounts two weeks previously in that same April of 2016.

One red flag after another passed until October 23 2016.

On that day, the Sunday Times splashed with a front-page article on Trillian, titled “The Dark Heart of State Capture”.

It took Sexwale just 12 hours to swing into action. He appointed Budlender to look into claims that Trillian had prior knowledge that Zuma was going to fire Nene and had planned to cash in on it.

The script was being crafted and Sexwale became a hero, a champion of the anti-State Capture cause, especially as he fought off Essa and Wood in their efforts to shut down the probe over the months that followed.

Yet, strikingly, he continued to draw R500,000 a month in fees for another eight months after former Trillian financial advisory CEO Mosilo Mothepu’s revelations about corruption at Trillian – three of those months after his one-year contract expired.

In fact, Trillian continued paying Sexwale right up to the day the Budlender report was released in June 2017.

Former staff members say Sexwale’s appointment to Trillian had brought an air of respectability and, importantly, a belief that “Brand Sexwale” would “open doors” to wonderful opportunities in the market.

When Trillian’s trying State Capture times began, some say, they looked to him for guidance, even comfort.

“We thought he would make the mess go away. There was hope because he made it look like it could all go away if they sold him the company.” DM

Full disclosure: Tokyo Sexwale’s Mvelaphanda was a shareholder in the Maverick magazine, 2006-2008.