amaBhungane: How Denel was hijacked 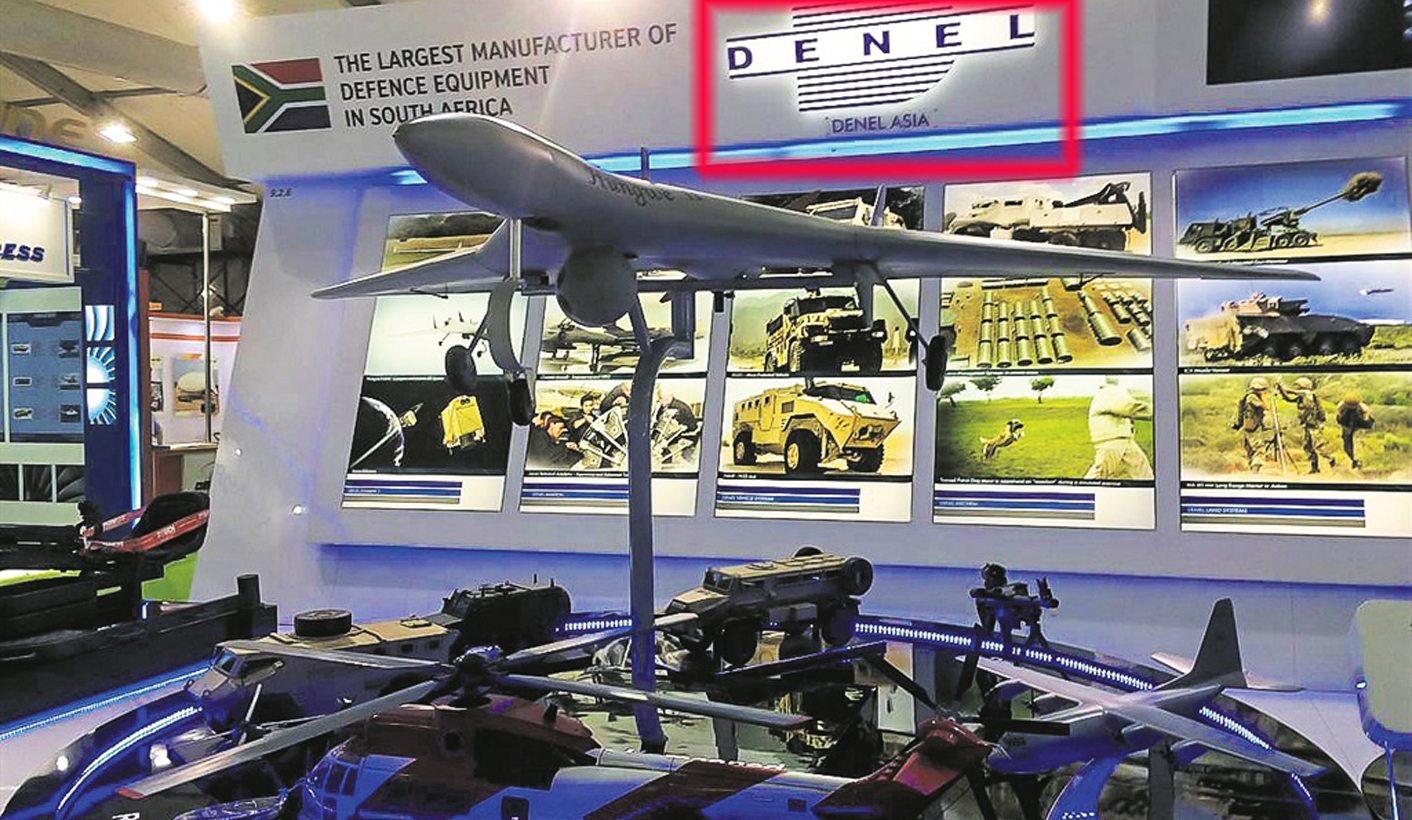 An amaBhungane investigation has revealed how the capture of Denel was orchestrated via a boardroom coup executed by Public Enterprises Minister Lynne Brown – contrary to the advice of her own department – followed by the premeditated axing of its top executives. By SAM SOLE for AMABHUNGANE.

The investigation also shows how the state-owned defence giant is being ushered into the arms of a Gupta-aligned company, VR Laser, despite a due diligence report from law firm ENSafrica, which allegedly raised multiple red flags about the joint venture between Denel and VR Laser Asia.

At stake is Denel’s lucrative Asian market — above all, it appears, a potential $4-billion (R62 billion) tender to deliver long-range artillery to the Indian army.

Four sources who sat on the previous board, but asked not to be named, have confirmed being told that a month before a new board took over on July 26 last year, chief executive Riaz Saloojee was warned that he would be pushed out.

The warning allegedly came from Denel board member Nkopane “Sparks” Motseki, who was allocated a significant personal stake in the Guptas’ Shiva uranium mine in 2010. The stake, if he still has it, now has a market value of tens of millions of rands.

Motseki is alleged to have called Saloojee just ahead of a board meeting in June 2015 and told him he and others were to be removed, because Saloojee had been asked to do certain things and had been “too weak” and had not complied or had been blocked by chief financial officer Fikile Mhlontlo, who was “too strong”.

At the June board meeting, the sources said, then-acting chair Martie Janse van Rensburg approached Motseki informally with a group of co-directors to ask about the allegation, and he allegedly confirmed what he had told Saloojee.

A source familiar with subsequent events told amaBhungane that Van Rensburg was so concerned about the perceived threat to the executives that she repeatedly attempted to arrange a meeting with Public Enterprises Minister Lynne Brown, who cancelled on more than one occasion.

Van Rensburg, the source said, eventually met with deputy minister Bulelani Magwanishe on July 2, 2015 and personally conveyed her concern about the rumours of the executives being removed.

Van Rensburg did not dispute any of the details of the account put to her, but declined to comment.

Brown has refused to comment on any of the detailed allegations put to her by amaBhungane.

Denel confirmed receipt of detailed questions, including those directed at specific directors, including Motseki, but failed to respond.

Key to the executives’ suspensions in September 2015 was the wholesale replacement of the board chaired by Van Rensburg. On July 24, Brown announced the “rotation” of the board, sweeping out all the previous non-executive directors but Motseki.

In doing so, Brown abandoned a list of proposed directors prepared for her by the department of public enterprises, which wanted to retain most of the existing board on the basis that they had performed well and had not served their maximum two terms.

The list eventually presented to cabinet bore no resemblance to the one prepared by the department. It also lacked skills and experience: there was not a single engineer and the majority had never served on a corporate board before, never mind of a highly technical group like Denel.

A number of the new directors also have a chequered past. First among these is the new chair, Dan Mantsha, who is also the legal adviser to communications minister Faith Muthambi.

Mantsha was struck off the roll of attorneys in 2007 for acting in a “dishonest and deceitful manner”. While Mantsha was readmitted in 2011, one might imagine this integrity deficit would be a barrier for access to the country’s defence sector jewels.

However, a well-placed source at Denel said it was rumoured that Mantsha’s particular recommendation was the positive impression he made on the Gupta family. Mantsha was said to have been introduced to the Guptas by Muthambi in July 2014. Muthambi’s office declined to respond to questions about the alleged introduction or whether it had taken place at Saxonwold, noting: “We are not in the business of responding to unsubstantiated allegations and innuendos.”

Once appointed, Mantsha’s board lost no time. In late September last year, barely two months after they took office, the new board suspended Saloojee, Mhlontlo and Africa.

The reason cited was a concern over aspects of Denel’s R855-million purchase of armoured vehicle manufacturer BAE Land Systems.

However, the previous board, despite being out of office, has recently taken the unusual step of publishing a joint statement affirming that the Land Systems deal made strategic and financial sense and was scrutinised and approved by both Brown’s department and Treasury.

And there are other hints that plans to sideline the three executives were premeditated: one source told amaBhungane that Denel’s acting CEO, Zwelakhe Ntshepe, and its Land Systems boss, Stephan Burger, told colleagues that they had been interacting with certain members of the new board three months before the new board members’ appointment.

And when a forensic investigation into the three executives’ conduct failed to incriminate them, the same source alleged, Mantsha, the board chair, sought to have the investigation report withdrawn.

Neither of these claims could be independently verified as neither the Denel board nor the executives responded to questions.

Editor’s note: Burger has since issued a categorical denial: “I was not and could never have been privy to the process of appointing the new Denel Board members nor have I met any one or more of them prior to a formal announcement by Denel’s shareholder… The allegation that I told colleagues that I “had been interacting with certain members of the new board three months before the new board members’ appointment” is wholly denied.

The firm that conducted the probe, Dentons, refused to confirm or deny the claim, citing client confidentiality.

Then, in January this year, came the bombshell: Denel acting chief executive Zwelakhe Ntshepe announced the formation of Denel Asia, a company in which Denel would own 51% and a Hong Kong letterbox company, VR Laser Asia, 49%.

VR Laser Asia is wholly owned by Gupta business partner Salim Essa and is an associate company of VR Laser Services, a South African steel cutting business in which the Guptas have an interest.

Burger is alleged to have told colleagues about a number of visits he made to Saxonwold to see the Guptas and to have expressed the view that the Guptas opened doors in India and provided very high-level contacts. Neither he nor the Gupta’s spokesperson responded to questions about this claim.

Editor’s note: Burger has now denied this: “The allegations contained in this statement are refuted as false as I have never been to Saxonwold to visit the Guptas… The article has caused severe and possible irreparable damage to my reputation, which is founded on, inter alia, integrity, honesty and accountability.”

By March 2016 Denel was touting its products at India’s DefExpo under the banner of “Denel Asia” (see main picture) although neither Brown, nor finance minister Pravin Gordhan had given the necessary authority for the formation of the joint venture.

In fact, according to two well placed sources, Brown is sitting with a due diligence report from law firm ENSafrica warning against the joint venture. The report apparently cites red flags about VR Laser’s proximity to so-called “politically exposed persons” and concerns about the company’s solvency.

The Denel board has continued vigorously to punt the VR Laser tie-up and push back against Treasury, which has described the formation of Denel Asia as illegal.

In the volatile Indian market, the reliance on the marketing skills of Salim Essa and company may be especially risky.

As the board itself has noted, Denel was blacklisted in India for nearly ten years while a tortuous investigation ensued of a 2005 deal to sell sniper rifles to the Indian army, which involved payments to “agents” in an offshore tax-haven.

The Indian Central Bureau of Investigation filed a closure report in 2013, as the charges could not be proved.

The Denel board has said the Denel Asia joint venture was undertaken “to minimise the business risks associated with agents in some of the countries we have identified for business expansion”.

According to a source with insight into the transaction, Denel has offered its intellectual property in the Denel Asia in return for a promise of R100 million marketing contribution from VR Laser. Both Denel and Essa failed to answer questions as to whether any of that money has been forthcoming.

Denel also failed to answer questions about what has become of it tie-up with the Indian conglomerate Tata, with whom it produced a prototype truck-mounted howitzer for display at Defexpo 2014.

India plans to secure around 1400 towed guns, 400 truck-mounted guns and 100 tracked (tank-mounted) guns at a total cost of more than $4-billion, but the country has laid down stringent local content conditions.

The Denel board presumably thinks bringing marketing agents “in-house” will pass muster, but the Indian defence media has already picked up on the controversy over Denel Asia – and the Indian howitzer competition is already littered with shattered reputations.

The Bofors scandal, which dogged the previous round of artillery purchases, dragged on for more than two decades. DM

Main photo: Facing a row because of ties to the South African Gupta family, Denel resurfaced in India as an exhibitor at DefExpo 2016 after years of blacklisting. (Photo: StratPost – South Asian Defence and Strategic Affairs)

We are an independent, non–profit investigative journalism centre. Like this story? Be an amaB supporter. Sign up for our newsletter. Visit us at amaBhungane.co.za.