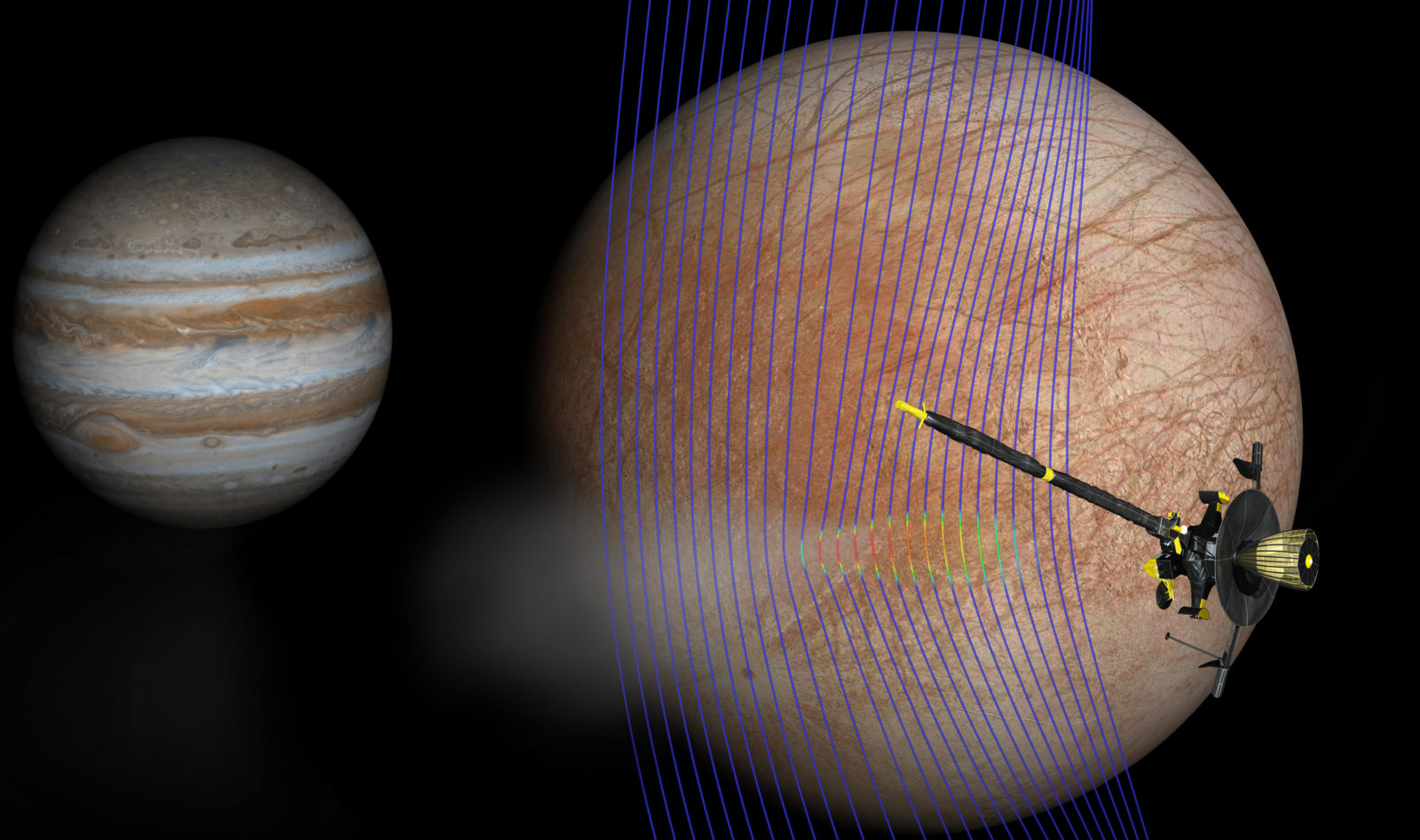 Artist's illustration of Jupiter and Europa (in the foreground) with the Galileo spacecraft after its pass through a plume erupting from Europa's surface. A new computer simulation gives us an idea of how the magnetic field interacted with a plume. The magnetic field lines (depicted in blue) show how the plume interacts with the ambient flow of Jovian plasma. The red colors on the lines show more dense areas of plasma. (Image: NASA/JPL-Caltech/Univ. of Michigan)

In May 2018, Dr Matthew Mayne, a geologist in the Department of Earth Sciences at Stellenbosch University, received an email from a scientist at Nasa.

Dr Mohit Melwani Deswani from the Planetary Interiors and Geophysics research group at Nasa’s Jet Propulsion Laboratory (JPL) in California wanted to know whether Matthew Mayne could tailor software tool Rcrust to be more relevant to studying Europa, one of Jupiter’s moons.

Rcrust is a thermodynamic modelling software tool that Mayne originally developed to investigate the formation of the mineral compositions of rocks on Earth under different temperature and pressure conditions.

Mayne explains: “Earth is not a compositional mass; it has different chemical layers. An upper crust is divided into an oceanic and continental crust, with a chemically separate upper mantle, lower mantle, outer core and inner core. All of these are chemically differentiated from each other and they maintain this chemical differentiation.

“We know the chemical composition of the layers, but we don’t know how the layers interact with each other, how they chemically differentiated to form each other and how they maintain that chemical differentiation and do not homogenise.”

Rcrust can be used to investigate interactions between different rock layers and how they form. Understanding this interaction is important because “if the layers stopped interacting, eventually the layers would homogenise into one mass. Maintaining the layers with different chemical compositions ensures that plate tectonics continues, and plate tectonics is one of the biggest reasons we have a carbon cycle, which mediates the temperature of our planet.”

Mayne further explains the link between chemical differentiation and the habitability of planets: “Without plate tectonics you get something like Mars. Mars doesn’t have an oceanic and continental crust. It just has one basaltic crust because at some point the plate tectonics on Mars stopped, and when it stopped we think that chemical cycling stopped, so even if life did exist there, it would have stopped when plate tectonics stopped.”

Mayne’s software can also be used to investigate the formation of planets and moons — which led to Maine collaborating with scientists from Nasa’s JPL, and the Space Science and Engineering Division at the Southwest Research Institute in Texas, to investigate the habitability of Europa.

Mayne gave a virtual presentation about his research at the JPL this week as part of the Science Visitor and Colloquium Program on Astrophysics, Planetary Science and Earth Science. The collaborating scientists are using Rcrust and other models to predict the origin of Europa’s ocean and how it formed in advance of the European Space Agency’s Jupiter icy moons explorer (JUICE) and Nasa’s Europa Clipper missions, which are planned for launch this decade.

Mayne is excited about the collaboration with Nasa because he wants to “understand how planetary and moon bodies form because understanding these processes can inform us about how Earth formed”.

He says: “There is some data to suggest there is chemical differentiation in other rocky bodies in the solar system, but we don’t know about the layering and interactions between the layers.”

Europa is of interest because it is an icy ocean world, and oceans are a potential source of life. Scientists suspect that there is an ocean on Europa, which is exciting because Earth’s ocean is a critical component of making Earth habitable through providing a source of oxygen and a sink for carbon dioxide, driving the water cycle and regulating temperature.

Mayne explains: “We think you need to have liquid water to have life. All the life we have seen so far has had liquid water associated with it, so whenever we find places with liquids we are interested to know whether the liquids are water liquids, as opposed to liquid carbon dioxide or methane.”

Why is looking for the conditions for life so important?

“Earth is the only sample we have of a habitable planet where life exists and if we find liquid water and other conditions for life on Europa and there isn’t life, that suggests life is potentially unique.

The appeal of using Rcrust, Mayne’s thermodynamic modelling tool, is that there are minimal data available for study in planetary science. However, Mayne says, “There is some chemical composition data available for Europa from sampling dust and chondrites, which are stony meteorites from the early solar system.”

The research team used Rcrust to investigate how rock components would have solidified over time on Europa. “As rocks solidify, excess water in the rock moves away from the rock,” he says, adding that the model predicted that “just through the process of rock solidifying enough water could have been excreted to form all of the ocean on Europa. Before, scientists thought that the water must have arrived with comets and meteorites, but by doing the maths, we showed that all the water could have come from Europa’s own rocky body.”

The scientists now have a prediction of some of the components that could make up the liquid on Europa, including water, carbon dioxide, calcium, sulphate and carbonate, which all could have been released from the interior of Europa over time. However, “we don’t know the chemistry of that liquid. We can predict that there was water there, but we don’t know what happened to it. Did it stay there? Was it diluted by other things?”

Will we get the answers? Possibly. The mass spectrometer for planetary exploration will be on board the Europa Clipper orbiter to measure the chemical composition of Europa’s ocean using high-resolution and high-sensitivity mass spectrometry to provide clues on habitability.

Now we wait for Europa Clipper to fly past Europa and see whether any of the scientists’ model predictions are correct. In the meantime, the Rcrust model will be used to investigate habitability and water sources on other planets and moons. DM

Dr Dian Spear is a freelance science communicator with a PhD in zoology from Stellenbosch University and experience working on, conducting research and publishing scientific papers in the fields of biodiversity conservation and climate change adaptation.