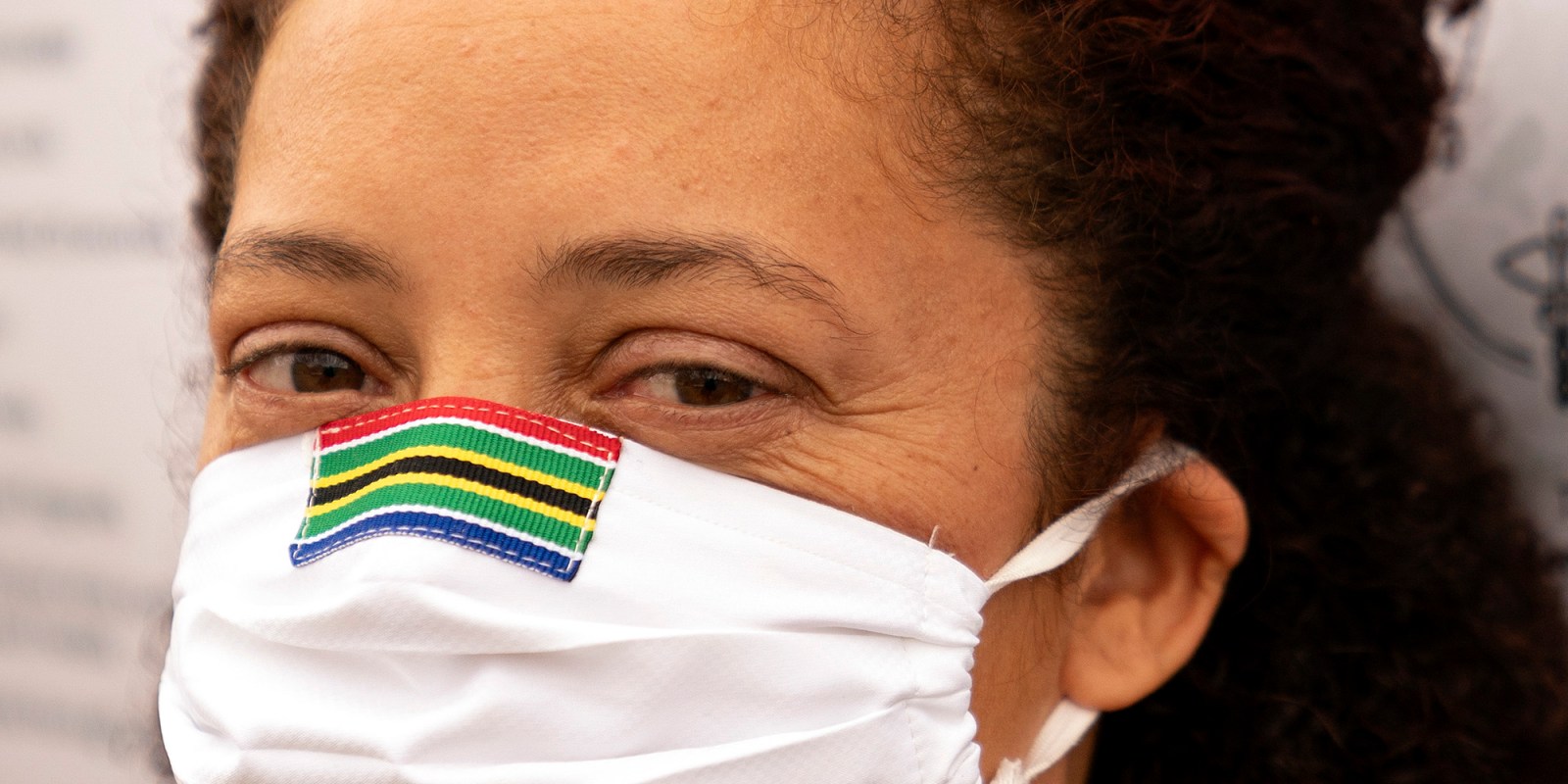 A South African resident of Ocean View Nadia Petersen poses for a photograph after her feeding program finished for the day in Ocean View, Cape Town. Petersen started the feeding program from her home in Ocean View which is one of the gang and crime hot spots in the city. Many impoverished residents rely on the one meal a day they receive from her due to the lack of jobs caused by the lockdown. Donations for Nadia Petersen's feeding scheme have been received from individuals across Cape Town who bring it to her home at 21 Mzar Crescent Ocean View.(Photo: EPA-EFE/NIC BOTHMA)

In recent weeks Nedlac has frequently been in the news over its role in developing a Covid-19 economic recovery plan. Maverick Citizen interviewed two of its Community Constituency leaders to try and find out more about civil society’s role. We found out that conflicts between two civil society bodies which were formed in response to the Covid-19 crisis, the Nedlac-affiliated Community Constituency Covid-19 Front and C19 People’s Coalition, have resulted in mutual criticism, accusations of preferential funding and a lack of cooperation in tackling issues arising from the pandemic.

Nhlanhla Ndlovu, introduces himself as the CEO of the National Economic Development and Labour Council’s (Nedlac’s) Community Trust which he says is the formal incorporation of the community constituency. Thulani Tshefuta is the overall convenor of Nedlac’s community constituency, which represents the interests of civil society.

Earlier this year both were involved in establishing the Community Constituency Covid-19 Front which, they explain, came into being in 2020 as a “formal advisory body to facilitate the participation of civil society sectors and networks” in response to the Covid-19 crisis.

Established in 1995 through the Nedlac Act 35 of 1994 and funded by the Department of Labour, Nedlac, particularly its community constituency chamber, has recently been the subject of scrutiny. Nedlac formed a rapid response task team on 16 March 2020, charged with looking at the impact of Covid-19 on health, the economy and jobs. It has been central to consultations with government regarding the Covid-19 response yet many civil society organisations claim to be in the dark about what is being done in their name.

When asked about the workings of Nedlac’s community constituency, Tshefuta explained that it was composed of civil society “apex organisations” such as the Disabled People South Africa (DPSA), the Women’s National Coalition (WNC), the SA Youth Council (SAYC), the SA National Civics Organisation (SANCO), the National Cooperatives Association (NCA) and the Financial Sector Campaign Coalition (FSCC).

He says the Covid-19 Front was formed in consultation with these organisations, as well as with broader organisations such as the South African National Aids Council (SANAC) and some organisations which are members of the C19 People’s Coalition.

The main areas of focus of the Covid-19 Front were public education and awareness, monitoring compliance with regulations, distribution of PPE and food supplies, and referrals to points of service that community members may need, he said.

Who sits at the Nedlac table?

According to the Nedlac constitution its criteria for membership is that an organisation must “represent a significant community interest on a national basis, have a direct interest in development and reconstruction, be constituted democratically and have a constitution which provides for democratic decision and be able to seek mandates from its own members and to obtain compliance from its members with regard to resolutions, procedures and policies of the council”.

The Nedlac community constituency has an annual strategic planning session where not only member organisations gathered, but also organisations from across civil society, to determine programmatic areas of intervention, said Tshefuta. Promised information or documentation on some of the community constituency’s strategic interventions and their outcomes have not yet been received by Maverick Citizen.

Asked about whether Covid-19 Front worked with the C-19 People’s Coalition, Ndlovu said that the C-19 leadership had been critical of the Covid-19 Front and have been “rubbishing” the organisation in media outlets such as the Daily Maverick. He said members of  C-19 had gone so far as to accuse Covid-19 Front members of being “politically exposed persons” and actively argued against Covid-19 Front getting resources.

“C-19 has decided to take a crazy ideological stance against us based on falsehoods. The calls are about us being investigated before we’ve even received money…they used publications like Daily Maverick to rubbish us and say we’re not deserving of money. I’m talking here specifically about people like Mark Heywood, who is rubbishing SANAC after he had served on it for years. He is talking about inclusion that he didn’t facilitate himself.

Ndlovu also criticised “the likes of Anele [Yawa, the General Secretary of TAC], who receives money but when money goes to us, we get called “insiders”. We can show that in organisations where Mark Heywood and Anele are participating they get more money than we do,” alleged Ndlovu.

Yawa said that “What Nhlanhla [Ndlovu] is saying are very serious allegations because I don’t remember interacting with him on any level. I would love Nhlanhla to bring evidence of these organisations that I’m leading, because I am only a leader of TAC. ”said Yawa.

“I am pretty sure there was no correspondence that came forward from any organization in that name or that there were any overtures from Nedlac social partners” said Desai.

Ndlovu was at pains to explain that he had become a leader in the sector because he had proven his commitment. He said he would never compromise an institution he was leading by “taking a little money for myself”.

As the Covid-19 Front they appreciated and valued the work of all in civil society, including the achievements of organisations like the TAC and SECTION27, which he described as the NGOs that are well resourced and part of the chorus against the funding of the Covid-19 Front.

Maverick Citizen asked both Ndlovu and Tshefuta to comment on allegations that they set up a Covid-19 Front “nerve centre” at a Pretoria hotel between May and June 2020, running up an unpaid bill in excess of R3 million. No response has yet been received.

Maverick Citizen will continue to seek clarity and understanding on the work of Nedlac’s community constituency and other civil society organisations involved in the Covid-19 crisis response as a matter of public interest. DM/MC