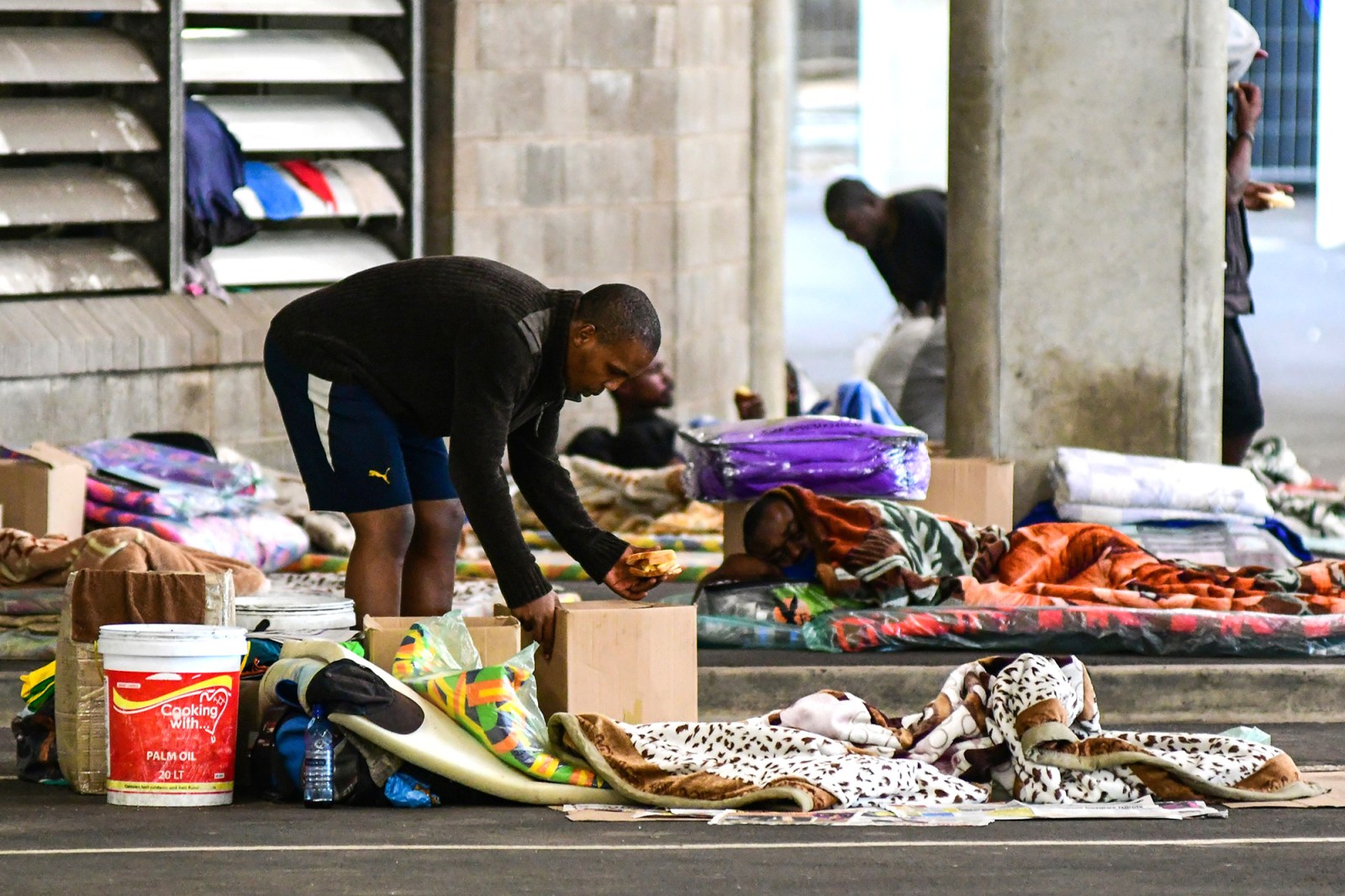 A general view at the homeless shelter at the Moses Mabhida parking lot in Durban. According to media reports, the shelter offers basic provisions like beds, blankets and hygiene supplies to vulnerable groups, in particular the displaced people, during the Covid-19 national lockdown. (Photo by Gallo Images/Darren Stewart)

For World Homeless Day, a Cape Town NGO is imagining a future city where no one sleeps on the streets, but says short-term welfare will not see this vision come true.

Each year, World Homeless Day is celebrated on 10 October to draw attention to those sleeping rough on the streets. This year marks the event’s 10th anniversary. In a tongue-in-cheek campaign, Cape Town-based homelessness NGO U-Turn has chosen to “cancel” World Homeless Day and rather put the spotlight on the problems with short-term welfare solutions.

“Society has a long tradition of responding to homelessness with short term welfare relief solutions – cups of soups, blankets and clothing, as needed. While the intentions are no doubt good, this aggravates the problem. People remain on the streets and numbers grow. Prior to Covid-19, we saw numbers visibly increasing on our streets. Post-lockdown, the situation is even more desperate,” said Rowen Ravera-Bauer, U-Turn’s strategic partnership development manager.

The organisation has seen a nearly 30% increase in the number of people accessing its service centre in Claremont, Cape Town.

“We see new faces at traffic lights. The challenge we face is greater than ever. There is an urgent need to shift gears from emergency relief to rehabilitation/development. We need to be wise in how we spend resources, looking more towards long-term solutions rather than a cup of soup-like approach,” said Ravera-Bauer.

The NGO is imagining a future city without an estimated 6,000 homeless people, 4,000 street dwellers or a shortage of shelter beds. These numbers predate the Covid-19 pandemic. There are no current figures for the number of street dwellers in Cape Town.

Since lockdown began in late March, most of Cape Town’s shelters have been filled to capacity and since the infamous Strandfontein temporary shelter closed down, many have returned to the streets.

About 1,500 people were housed in large marquees at the Strandfontein sports ground under what some civil society activists described as concentration camp-like conditions.

It provides bed space for up to 96 people.

The city announced in early August that it will review its street people policy established in 2013. The document, which hasn’t been revised since, is linked to the city’s bylaws, one of which came under fire in 2019 for allowing homeless people to be fined.

“We will be undertaking a series of dialogues with the street people sector in the coming months to help inform the strategy,” said mayco member for community services and health Zahid Badroodien.

A series of talks pertaining to the review were held under the banner of the Inkathalo Conversations, a joint initiative by the Community Chest and Women Lead Movement.

The discussions culminated in an interim report released on Saturday.

Speaking at the Inkathalo dialogue, chairperson of the Hope Exchange Warren Conrad criticised the existing policy, saying it lacked collaboration, diversity and inclusivity, and new policy directives were needed.

For example, the provision of affordable housing close to the city; training on income-generating projects; and entrepreneurship and strengthening family ties.

“The voices of homeless people must be central to this process,” said Conrad.

Ravera-Bauer said it was necessary, now more than ever, to increase capacity for sheltered employment and skills development.

“We are calling for our city to celebrate World Homeless Day by investing carefully in long-term solutions, so that we may cancel this day.” DM

To assist the organisation, you can donate funds, buy U-Turn vouchers or donate goods.