Which curve to flatten in Africa: Coronavirus or economic growth and development? 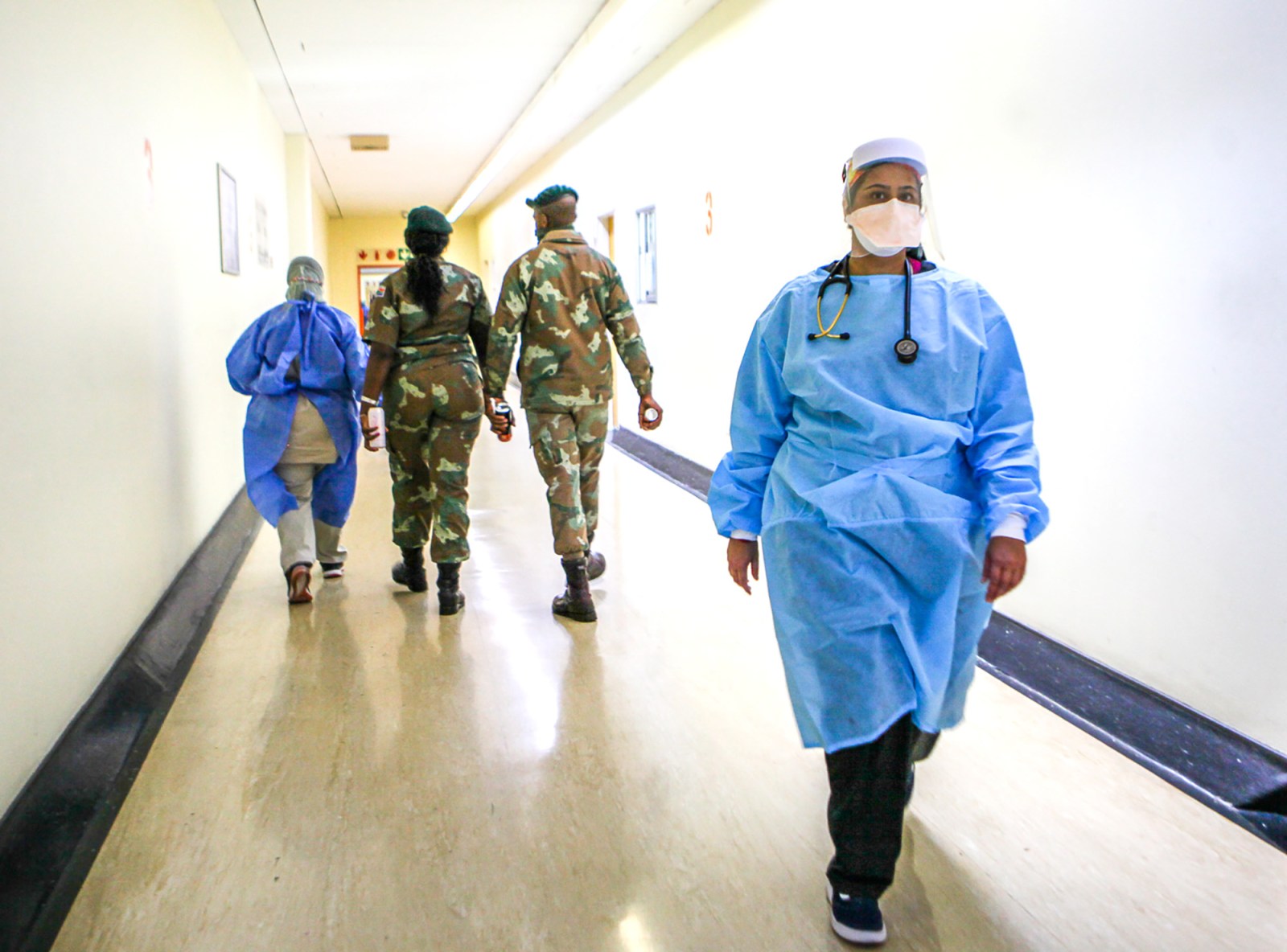 Acting MEC of Health Jacob Mamabolo receives ventilator machines donations by the Solidarity Fund to the Gauteng Provincial Government at Charlotte Maxeke Academic Hospital on August 24, 2020 in Johannesburg, South Africa. The donation is a critical intervention in the fight against the COVID-19 pandemic. (Photo by Gallo Images/Sharon Seretlo)

The consequences of the stringent and prolonged Covid-19 lockdown measures have had dire consequences for many African countries. The Covid-19 curve may have been ‘flattened’, but so too has the curve for economic growth and development. The African economy is expected to contract by 3.2%‚ reducing per-capita income to levels last seen in 2010.

Finally we are starting to understand Covid-19. After nine months of global disruption and extreme responses, with real numbers starting to trickle in, the true impact and nature of the virus seems clearer. This should mean fewer surprises ahead. But, most importantly, as we learn to coexist with Covid-19, we are better placed to evaluate the actions taken by governments to combat the spread of the virus and assess the economic trade-offs. For now, one thing is certain: while lockdowns may have been necessary, their impact in the developing world has been devastating.

According to the World Bank and United Nations, the number of poor people in the world will double to 500 million this year. Most of this increase will be in Africa. The continent will experience its first recession in 25 years. And with experts warning of economic collapse, increasing inequalities and spiralling epidemics from malaria to tuberculosis (TB), there is widespread fear that the progress made over the past two decades will be reversed.

Were blunt lockdowns the right approach for Africa and appropriate to the African context?

As Covid-19 deaths globally reached one million at the end of September, Africa’s death toll stood at 3.5% of the total. This is far lower than initial projections. Some have suggested that a combination of Africa’s youthful population – where the median age is 18 versus 41 in Europe, warmer weather and outdoor living, and widespread childhood BCG vaccinations can be attributed to fewer lives lost. The reasons for this are still not clear. The continent appears to have been spared the worst of the disease in terms of loss of life. But the same cannot be said for the enormous loss of livelihoods.

Already constrained fiscally, with high levels of debt before the pandemic started, a combination of rolling lockdowns, a collapse in global demand and disrupted supply chains, the oil price crash and a locust infestation that has decimated export crops, has created a crisis of unprecedented proportions in Africa. What began as a health crisis has rapidly become an economic crisis with widespread starvation, poverty and suffering set to last well beyond 2020.

Despite being praised for taking early “decisive” action with swift lockdowns in an attempt to “flatten the curve”, the consequences of these stringent and prolonged measures have had dire consequences for many Africans. The Covid-19 curve may have been “flattened”, but so too has the curve for economic growth and development. The African economy is expected to contract by 3.2%‚ reducing per-capita income to levels last seen in 2010.

Nearly $16-billion of emergency financial assistance has been requested from the International Monetary Fund by 40 African countries, adding to the mounting debt crisis across the continent. This, along with a spike in deaths from other treatable diseases, skyrocketing unemployment, rising gender-based violence, and social and political unrest signal a concerning reversal of progress in Africa.

In a strange twist of irony, as African governments finally took stock of their poor healthcare systems and geared up for an expected onslaught of coronavirus patients by building capacity in the form of field hospitals, and sourcing scarce equipment like ventilators and personal protective equipment, other serious, but preventable, diseases have become “invisible deaths” — lost in the single-minded focus and chaos in response to Covid-19.

Malaria is a prime example. Around 380,000 of 405,000 malaria deaths recorded globally in 2018 were in sub-Saharan Africa. With malaria-intervention efforts impacted by lockdowns and critical healthcare resources being diverted to coronavirus relief efforts, malaria cases could double from 2019 to 2020. Nigeria alone is expected to record an additional 81,000 malaria deaths in this period. The World Health Organisation is predicting an additional 200,000 deaths from TB this year.

Africa’s hard-fought battle to grow its middle class will receive a decisive blow and poverty levels will rise for the first time in years. Meanwhile, unemployment will also increase with an estimated 20 million jobs lost as restrictions have stifled small and informal businesses, the lifeblood of the African economy and African households.

Covid-19 has also revealed the fragility of democracy in Africa, exposing the tendency of governments to adopt authoritarian approaches by showing little respect for citizenship and constitutionality through the use of ever-extended state of disasters as a political weapon.

As a second wave of infections is set to hit Europe and North America, which are heading into winter and flu season, the possibility of a second wave hitting African countries and what it will mean for the continent, is front-of-mind. But there should be no more surprises, or excuses, around the course of action countries take in limiting the spread of the virus and managing its impact.

The pandemic will be with us well into 2021. In the spirit of coexistence, governments need to identify the economic trade-offs of their response to the virus, and consider these in a balanced and sustainable approach that fits the particular context. This is particularly relevant in Africa, where countries have a complex set of economic, social and political issues with a fragile foundation. Most lack the capital to sustain their populations during prolonged lockdowns. A straitjacket approach to curbing infections has proven unsustainable. They tend to deliver unintentional and lasting consequences in setting back socioeconomic progress made.

As the phased reopening commences and Africa works to recover, context-driven measures that consider the array of issues Africans confront are critical if countries are to recoup past gains, and achieve their development goals.

The African context and the solutions it requires will be different to the rest of the world. This is not a battle decided by the number of ventilators alone. Africa has reminded us of one certainty: One size does not fit all — as we have seen time and time again. DM

Prof Lyal White, Liezl Rees and Nikitta Hahn are with the Research Team at the Centre for African Business at the Johannesburg Business School (JBS), University of Johannesburg (UJ).