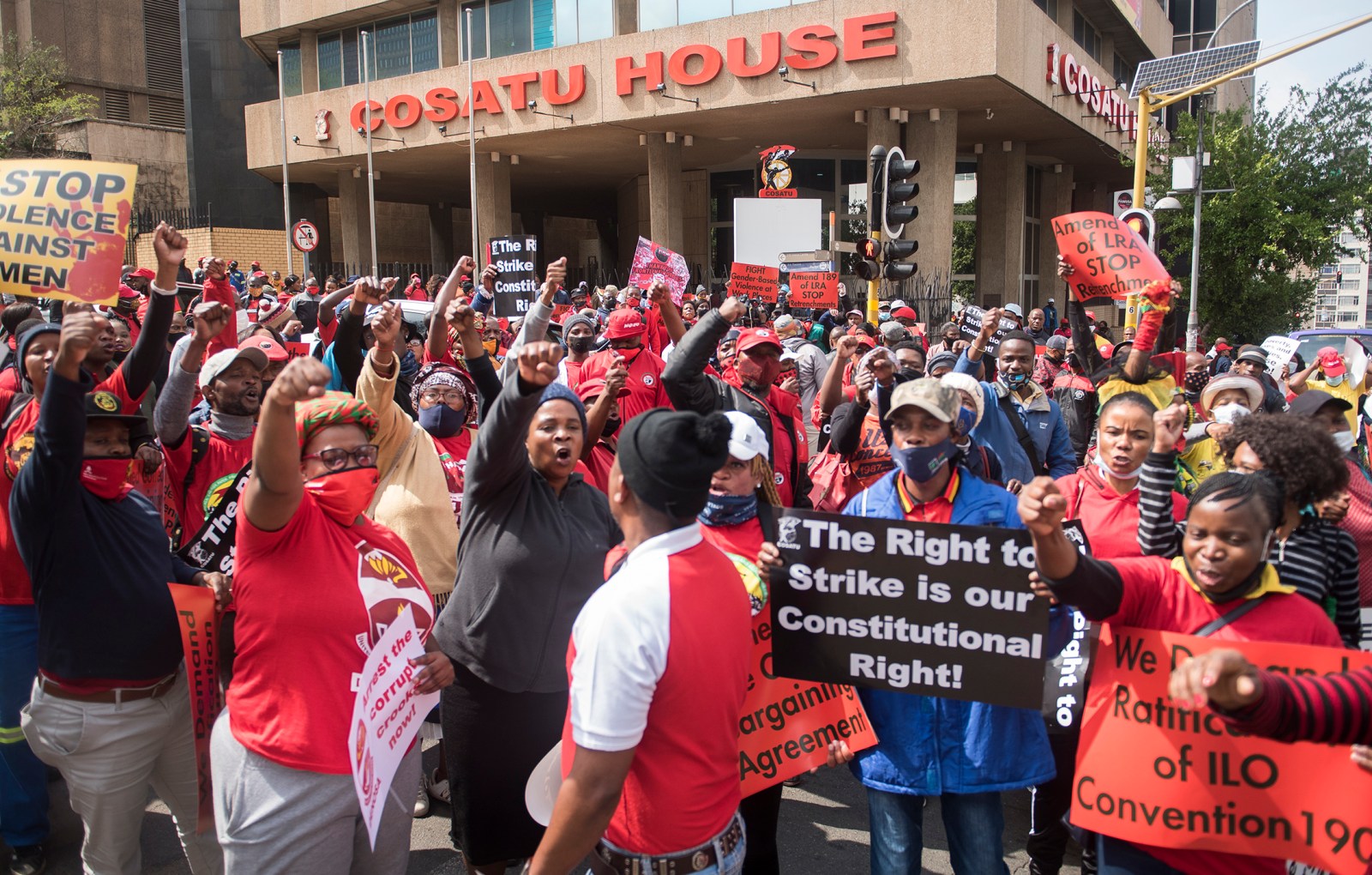 On Wednesday, four labour federations flexed their combined labour muscle and embarked on a national strike, with Cosatu hinting it will withdraw its electoral support for the ANC if it cannot immediately engage in serious labour-related discussions.

This was said by Cosatu’s Gauteng chairperson, Amos Monyela, speaking outside Cosatu House in Johannesburg on Wednesday. Hundreds of Cosatu-affiliated union members marched from Cosatu House through the Johannesburg city centre on their way to deliver a memorandum at the Mineral Council SA head office.

“The burning question that we need to focus on is whether or not we still need to vote for the ANC. Every five years we put a government in charge but someone else gets to pull the strings, leading to the current problems we are currently faced with, including gender-based violence, corruption and job losses,” said Monyela.

“We are currently voting for the ANC, that is a congress decision. That is our current position as Cosatu. As things stand now we have a resolution to vote for the ANC, but we must have a decision, that’s all we are saying.”

A Cosatu member read from the memorandum: “We are gathered here to express, on behalf of millions of workers and ordinary people, anger, frustration and united solidarity against the horrifying conditions we are all faced with.”

He continued: “We stand firm to express our anger and disappointment at the lack of care, support and protection of fellow frontline workers, who put their lives at risk to save all of us from the scourge of the Covid-19 pandemic. Sadly, we have lost several of them in this pandemic, because we put the profits and interests of the rich ahead of those of workers and the poor.”

In the memorandum, Cosatu made the following points:

The memorandum also called for the provision of sufficient personal protective equipment (PPE) for all frontline workers and the elimination of the gender pay gap in all workplaces.

The strike comes as South Africa and the world are grappling with the devastation caused by the Covid-19 pandemic, and as the labour force stumbles out of an economic crisis of significant proportions.

Responding to those who questioned the timing of the strike, Monyela said there is never good timing when it comes to matters of the stomach. He said workers are hungry and need to feed their families.

“How do you time the struggle of the stomach?” asked Monyela.

“How do you expect us to wait when people are looting the Covid-19 relief funds, yet the entire world is under so much pressure from the pandemic?”

Federation of Unions of South Africa (Fedusa) spokesperson Frank Nxumalo said, “We are here to join our sister federation Cosatu because the issues that they are raising here are cross-cutting issues and ones that affect all of us as the working class. However, as Fedusa our main problem is corruption.

“Our colleagues are frontline workers in the fight against the Covid-19 pandemic, and corruption has deprived our members of proper PPE. As labour, we have a direct interest in what is happening as it affects the way we care for patients.”

PPE for frontline workers in the medical profession has been a contested issue, with claims of widespread corruption in awarding tenders.

Patience Phirwa, a nurse at the Charlotte Maxeke Hospital in Johannesburg, said:

“We had to perform our duties without protection. Charlotte Maxeke was a high-risk hospital, but we still have a shortage of PPE. We are saying as Denosa [the Democratic Nursing Organisation of South Africa], especially nurses that have been facing death daily, that we are fed up.

“The working conditions are very scary. We are not valued as nurses in this country. We are only driven by our pledge to serve our communities. Laundry nurses work in risky conditions where they constantly come into contact with dirty linen and without proper protection.”

Phirwa said there were not even antibiotics at the hospital for discharged patients to take home. She said patients were given Panado, but that even this was not available at times.

She said that they had not yet received their annual increase, which was due in April, despite this money already being budgeted for. She said nurses get an annual uniform allowance of R2,200, which was not enough, and that they buy their own PPE.

The strike took place in South Africa’s big cities. Unions affiliated to Cosatu said the issues which Cosatu was complaining about were interrelated, and that the union federation needed the support of all workers.

Police and Prisons Rights Union (Popcru) spokesperson Richard Mamabolo said: “The issue of corruption has had a dire effect on the creation of jobs and the proper functioning of state institutions. That has created job losses and diminished the populace’s faith in the criminal justice system of the country, as not much has been done about it thus far.”

“What nurses are demanding is not far-fetched. We are in the frontline, but the government has left us to our [own devices] despite us staring down the barrel of the gun daily.”

Many businesses in the Johannesburg city centre had to temporarily shut down as members of the protest made their way from Cosatu House, singing and chanting as they peacefully marched through the city. DM

This article was amended on Thursday 8 October at 10am to reflect the combined nature of the protest action that included four federations.