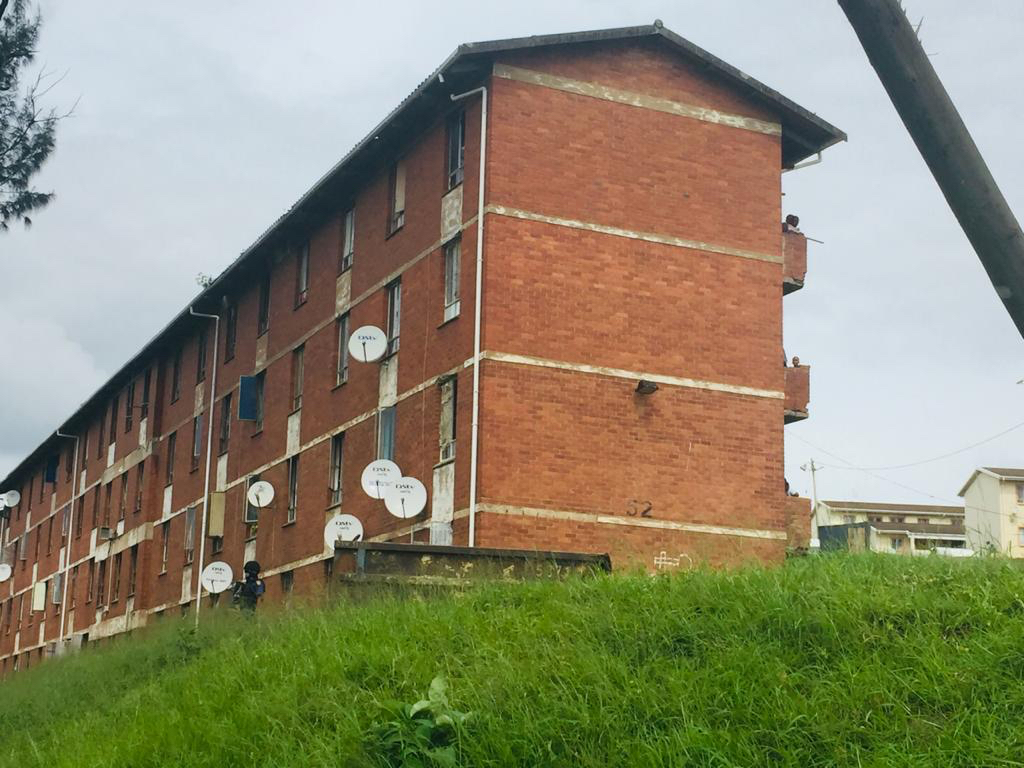 A string of murders were committed at the Glebelands hostel in Umlazi, North of Durban, between 2014 and 2016. The state witness stayed in the most infamous section, block 52, pictured above. (Photo: Nompendulo Ngubane)

After being postponed due to the lockdown, the Glebelands 8 trial has resumed in the Pietermaritzburg High Court. Eight suspects face charges related to a string of murders committed between 2014 and 2016 at the infamous hostel.

The “Glebelands 8” trial was back in the Pietermaritzburg High Court this week after it was postponed due to the Covid-19 pandemic. A state witness, who claims to have been a police informer, took the stand.

The murders were committed at the Glebelands hostel in Umlazi, north of Durban, between 2014 and 2016.

Under cross examination by state prosecutor Dorain Paver, a state witness, testifying in camera, said that when William Mthembu and Thokozani Machi were gunned down in Montclair on 12 September 2015, Mthembu was believed to be controlling the leaders of different blocks in Glebelands, and that Machi was his hitman. A plan was therefore hatched to kill them.

The witness previously told advocate Martin Krog, representing Mdweshu, who faces 19 charges, that he had been a police informer before the 2015 murders. But he had also previously said he only met with the police after these killings.

On Monday, under cross-examination by Krog, he said the incidents happened a long time ago, and he had muddled the sequence of events. “I forgot to say I had worked with the police before, and that led to the arrests of some people,” he said.

“How long had you been working with the police before you informed them about the killings of Mthembu and Machi?” asked Krog.

“I don’t remember how long it was, but it was on many occasions that I gave them information,” said the witness. “The police would call me. They told me which person to keep an eye on. The information they wanted was where the person was and what the person was wearing and those people were arrested.”

He said he helped the police arrest Mahliphiza Mkhize, a suspect in a murder case in Umlazi in April 2016, and Wonder Hlophe, another suspect in the attempted murder of Cisqo Ngqatshane in December 2015.

Krog asked if the police paid him for the information and why they had specifically chosen him.

“I think they chose me because I stayed in Block 52. They did not pay me. Most of the things were happening in Block 52. Police would be the ones telling me who to stay close to and I did that. I did it with the Montclair incident when Mthembu and Machi were killed in 2015.

“I told them all what they needed to know. They came to my work place during lunch time and I told them what happened. I told them the names of the people that were involved in those killings,” said the witness.

He said he gave further information, but to different police officers a few days after the Montclair killings.

“They came to my work place, asked me questions and jotted whatever they wanted to write and left.”