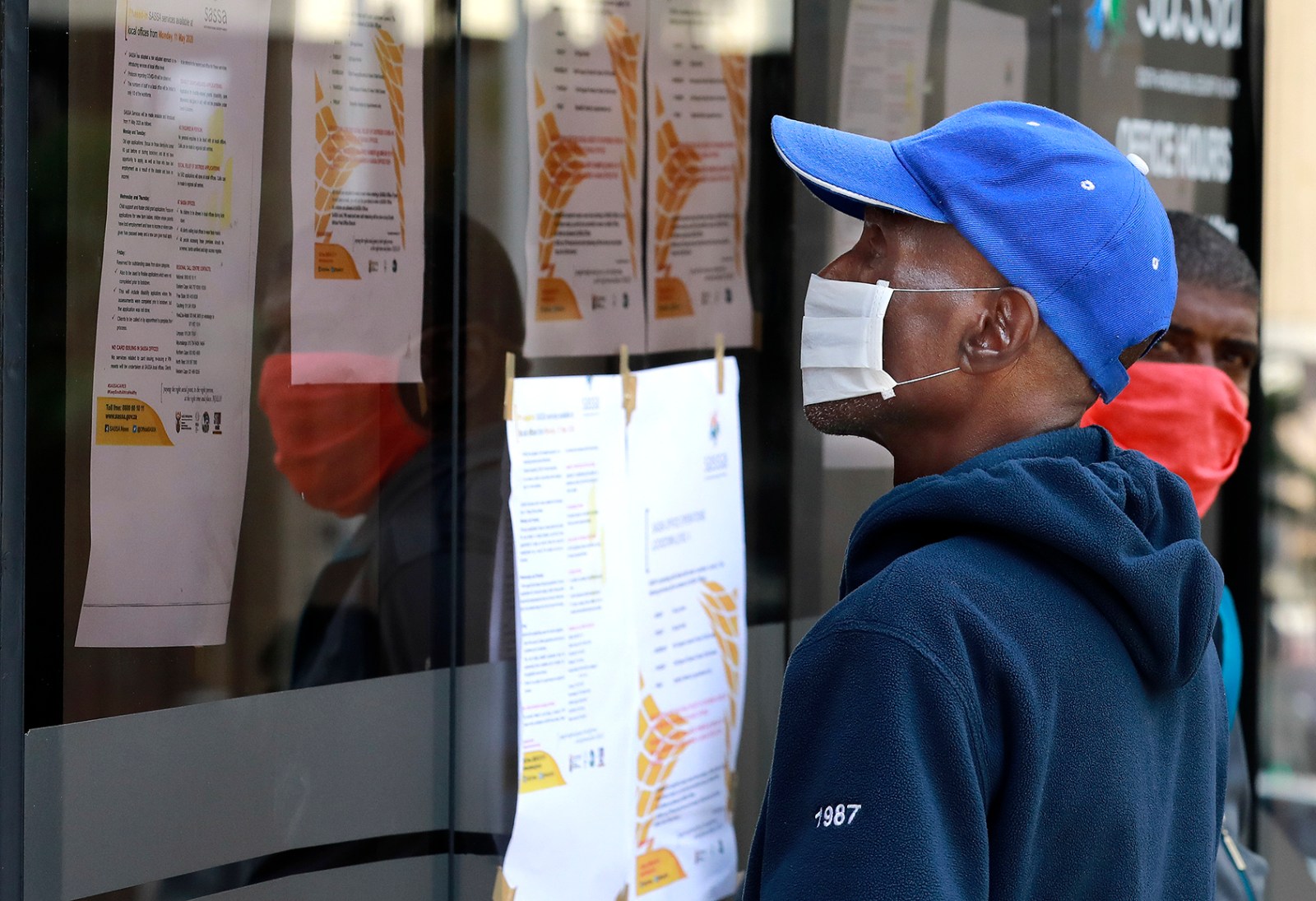 CAPE TOWN, SOUTH AFRICA - MAY 12: People with face masks seen at a South African Social Security Agency (SASSA) building in Cape Town South Africa, Tuesday, May 12, 2020. The South African goverment announced that a R350 grant to help unemployed people not receiving any form of subsidy or grant during the Covid-19 pandemic would be paid from May to October. It will be open to South Africans, refugees and permanent residents already in the Department of Home Affairs' system and those residing within the borders of South Africa. (Photo by Gallo Images/Nardus Engelbrecht)

Estimates from the National Income Dynamics Study – Coronavirus Rapid Mobile Survey (NIDS-CRAM) survey indicate that the Covid-19 grant reached 4.3 million people as of the time of the survey. This accounts for 12% of the South African adult population, 11.5% of the labour force, and nearly one in every four (24%) of the searching unemployed.

Since March of this year, nearly 1,200 social protection measures have been implemented across the world in an attempt to mitigate the adverse effects of the Covid-19 pandemic. Nearly a third of these measures consist of cash transfers (grants) and 68% are brand new. In this light, the South African government expanded the country’s system of social assistance by topping up the amounts of every grant as well as introducing a special Covid-19 Social Relief of Distress (SRD) grant of R350, both for six months.

Collectively, President Cyril Ramaphosa’s social grant package potentially provided much-needed support to about 36 million South Africans, or 63% of the population – an incredible reach within such a short period of time. We know that the distribution of existing grants in SA is very progressive, so any additional spending will benefit poor households. This is important because we estimate that those who live in the poorest fifth of households accounted for a third of total job loss between February and April. What was less well known, however, is to what extent the new Covid-19 grant would reach those most in need.

The special Covid-19 grant was intended to provide relief to individuals above the age of 18 who are unemployed, do not receive any income nor any other social grant, nor support from NSFAS or the UIF. Payments of the grant began towards the end of May, following delays in the processing of applications and payments – largely attributable to the setting up of relevant processes and systems, late verification of recipient banking details, and issues that Sassa experienced in gaining access to relevant databases for verification purposes. These delays are reflected in monthly grant expenditure data. Whereas R36.5-million was spent on the Covid-19 grant in May, nearly R1-billion was spent in June. As of the beginning of September, R4.8-billion of the total budgeted amount of R11.85-billion for six months (40.5%) had been allocated to approximately 5.5 million successful applicants.

Only now do we have sufficient data – NIDS-CRAM Wave 2 conducted from 13 July to 13 August 2020 – to analyse the distribution of the special Covid-19 grant. The NIDS-CRAM is a broadly representative mobile survey of 7,000 South African adults which seeks to inform policy-making by aiding rapid research on key socioeconomic outcomes in SA during the Covid-19 pandemic and national lockdown. At the time of writing, there is no comparable existing dataset which can be used to analyse these dynamics. Although our estimated number of grant recipients is similar to official records, we must emphasise that our household income estimates come with some unavoidable imprecision given the extent of missing data.

Estimates from the NIDS-CRAM indicate that the Covid-19 grant reached 4.3 million people as of the time of the survey. This accounts for 12% of the South African adult population, 11.5% of the labour force, and nearly one in every four (24%) of the searching unemployed. Nearly 90% of recipients are self-reported black African, 55% are male, and nearly three in every five (57%) are younger than 35 years. More than half (53%) of those who were not employed during lockdown in June received the grant, as opposed to just 15% of those who were not employed before lockdown in February – indicative of fairly positive initial targeting of the grant. Considering transitions out of employment, about one in every five of those who were employed in February but not in June received the grant.

One key concern of the introduction of the grant was whether it would succeed in reaching vulnerable households. As shown in the graph below, we find that application for and receipt of the grant has been relatively pro-poor. Of the 4.3 million recipients, 33% live in the poorest fifth of households, 13% in quintile 3, and just 6% in quintile 5. In other words, for every recipient who lives in the richest quintile of households, more than five recipients live in the poorest. Close to 90% of those in the richest quintile have never even applied.

In both absolute and relative terms then, the distribution of the Covid-19 grant has been progressive. However, many individuals, while eligible for the grant, are not receiving it. In addition, the extent of this under-coverage is regressive. Of the estimated 6.5 million eligible non-recipients in June, nearly half live in the poorest third of households. There may be several reasons for this exclusion error, such as many individuals not actually being in distress (such as those who technically have no income but are fully supported by their partners, or self-employed individuals who are not registered with SARS). The additional challenge, however, lies in ensuring the ineligible do not receive the grant. We find that 28% of those who are ineligible but have received the grant live in the richest tercile of households. Although such leakage is substantially lower for the Child Support Grant (CSG), it is important to note that the Covid-19 grant brought millions of previously unreached individuals into the system who could not have been reached through the CSG.

Whilst 4.3 million people successfully received the grant at the time of the survey, another estimated 4.3 million were still awaiting the outcome of their applications, 62% of whom were not employed in June. The challenge of social assistance in SA during the lockdown was to effectively reach low-income households, but crucially also those who lost their jobs. To some extent, the top-ups to existing grants addressed the former, whereas the special Covid-19 grant addressed the latter. Ultimately, this is indicative of a fairly positive integrated social welfare response from government – within a constrained fiscal environment during a period of negative growth. DM/MC