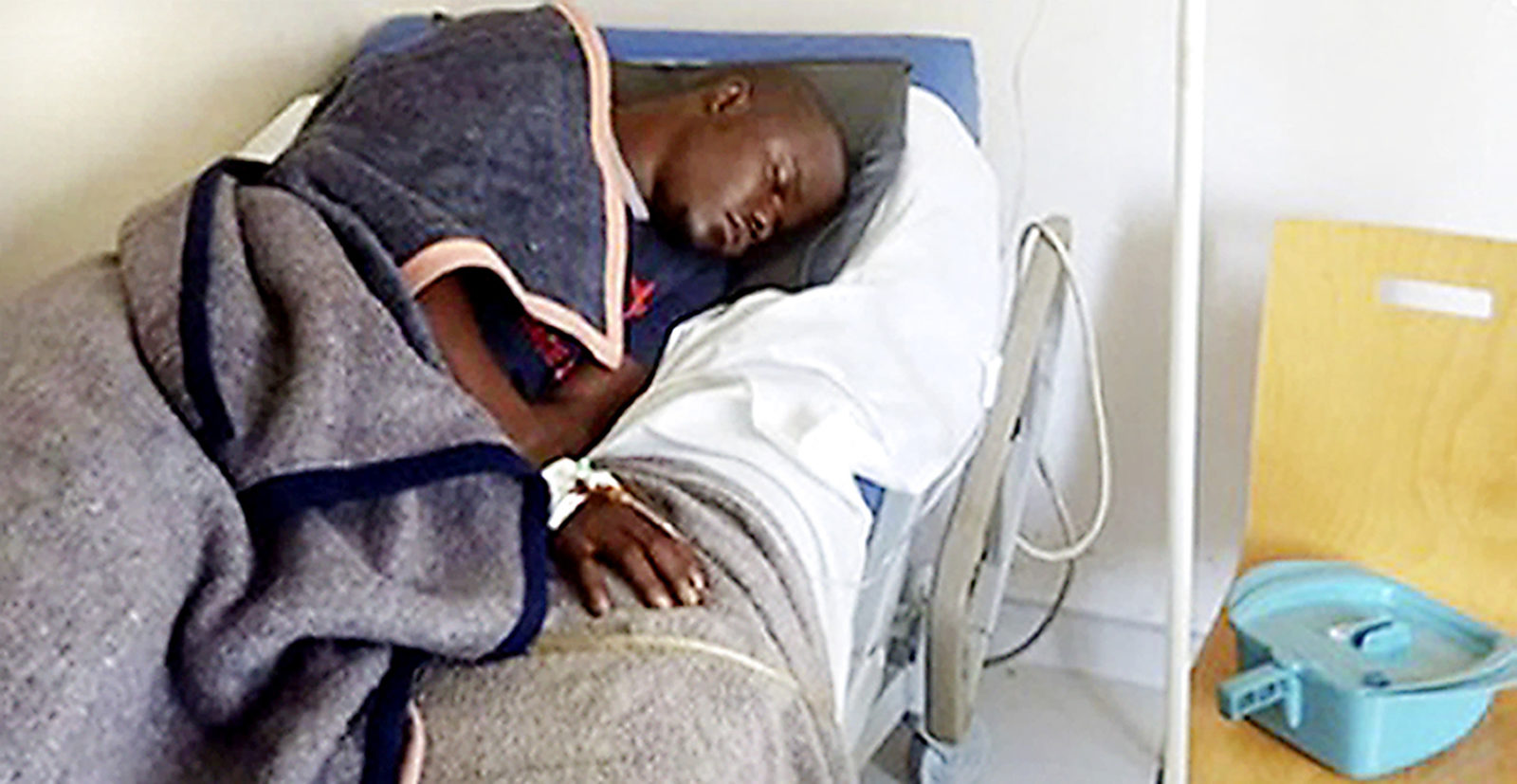 In recent weeks the government of Zimbabwe has vociferously denounced claims that a crisis exists in that country. The ANC leadership seems keen to keep that faith. Yet on a daily basis, the tales of terror and violence mount up. In addition, there is an untold tale of hunger and immiseration that spreads across the population. In this article, regular Maverick Citizen correspondent and human rights activist Thandekile Moyo tells a personal story of the day the abductions came to her doorstep. We publish a three-part series from Moyo.

On Tuesday 28 July I got a voice note from my book research assistant Tawanda Muchehiwa saying to me, “I am being followed. This afternoon I noticed three cars that were following me and I felt them closing in on me, I felt surrounded. Fortunately my cousin managed to quickly come and rescue me. I’m home safe.”

I quickly picked up the phone and called him. Something I hardly ever do, I hate phone calls, so our communication is always voice notes and messages. We spoke about what had happened and he expressed how he felt maybe he was being paranoid.

I said to him, “look, you are a Human Rights Defender. In their eyes you are an enemy”. We then decided to play it by the ear and be more vigilant. I think at the time, both of us had no real grasp of the ominousness of the situation. Having been followed before, with nothing sinister happening to me, I thought maybe they were just trying to intimidate him.

But just to be on the safe side, I notified a few people that Tawanda might be in danger.

The next day, Wednesday 29 July, I got another frantic message from Tawanda. He was being followed again. I remember panicking as well and asking him what on earth he was doing in town. “Didn’t we agree that you must stay at home?” I asked him. He explained that he had some errands to run and he still wasn’t entirely convinced he was seriously being followed. He then told me not to worry because he was now safe.

On Thursday morning, the day before the much anticipated 31 July protests, Tawanda and I discussed our plans for the protests. He then disclosed to me that he had been talking to Samkeliso Tshuma, another activist. I was excited to hear that because I knew not many people would be brave enough to take to the streets.

Later that day I received information that Tawanda might have been arrested. Their cars had been seen parked outside Bulawayo central police station.

At around 5pm, my phone rang. I checked the ID and it was Tawanda. But something was off; first of all, Tawanda and I mostly communicate with WhatsApp messages, secondly, we never “direct call” each other because we all know that our phone lines are bugged. We only call via WhatsApp. Thirdly, Tawanda had been MIA all day, and we suspected he had been arrested, so if he was arrested, how was he calling me?

I then decided to answer the phone in case it was a distress call or some kind of SOS. I answered and asked him if he was okay, to which he said yes. He had the most bizzare thing to say. He told me “the posters” were ready and I should come and see them.

“What posters?” I asked.

He couldn’t explain. He said just come and see them. I then told him let’s talk on WhatsApp. He protested that request and said his network was bad but I insisted and he had no choice but to agree.

A few seconds later I was on the phone with his uncle, Zimlive editor Mduduzi Mathuthu, to whom I relayed the information that Tawanda had called me and he shouted “Do not go. It’s a trap. They have Tawanda. The police are at my house as we speak.”

Never have I felt so defeated in my life.

I checked my phone and discovered several missed calls from Tawanda again, this time on WhatsApp. I knew it was a trap. But I couldn’t not talk to him. I don’t remember if I called him back or if he called but we spoke again. I asked him where he was and he responded with uncertainty. I got the sense someone was telling him what to say. He sounded different, I could tell he was under duress. He was also addressing me in an uncharacteristically casual manner, flippantly – he’s usually so respectful, I can’t explain it but the whole conversation confirmed my worst fears, Tawanda had been abducted.

I then remembered he had mentioned he was in touch with Samkeliso Tshuma and I went into a panic because if they had his phone then they knew he had been planning to march with her on 31 July. I thought she might be at risk so I called her and told her, “Tawanda has been abducted. no matter what, do not take any calls from his number.”

I then called Nqobani Sithole, Tawanda’s lawyer and informed him about my fears. He said the police were denying having arrested Tawanda, but he said the cars Tawanda and his cousins had been in were parked outside the police station.

He refused to leave the police station until his clients were produced. The police then reluctantly produced Tawanda’s cousins, Advent Mathuthu and Amandlenkosi Mathuthu. But not Tawanda Muchehiwa. Police claimed Tawanda had escaped. But his cousins immediately set the record straight. Nqobani Sithole then sent me these messages:

“Actually I can confirm, i’ve seen the other 2 who allege they were arrested with Tawanda & he was bundled in a different car, he is missing.”

“You were right! Tawanda has been abducted. Pound the alarm.”

I then went to Twitter and posted these three tweets:

“I believe the govt of Zimbabwe abducted my book research assistant Tawanda Muchehiwa this afternoon,

They arrested him together with 2 boys & we have spent all day searching for them to no avail,

Police claimed they didn’t have them in custody,

“Around 5pm I received a call from Tawanda who sounded desperate & not ok/himself,

Asking me to meet him,

I asked him where he was & he was incoherent,

A lawyer went to Byo central & ZRP denied having the 3,

The lawyer was unrelenting,

ZRP then produced the other 2.

“This is the message from lawyer:

“Actually I can confirm, I’ve seen the other 2 who allege they were arrested with Tawanda & he was bundled in a different car, he is missing.

The Police are saying they know nothing about him.”

I am deeply worried for his safety!

Only after I had published the tweets did I realise I had made a mistake and posted to the wrong Twitter account. I had been asked to be guest administrator for the page @curatebyo, a Bulawayo page run by a different person every week. I decided it did not matter, the goal was to let as many people as possible know that Tawanda had been abducted and disappeared.

I will never forget that first night Tawanda was missing. I could not sleep. I kept waiting and hoping to hear he had been dumped somewhere. But we had no such luck.

Tawanda’s cousins revealed something peculiar. They had been arrested together with a woman called Tendai Masotsha, the Bulawayo women’s chairperson of Zimbabwe’s main opposition, the MDC alliance.

Who was this Masotsha woman? Tawanda had never mentioned her to me.

Advent and Amandlenkosi explained they had met up with the woman in town and she said she wanted to give Tawanda fliers for the 31 July protests. When they got to her, instead of giving Tawanda the fliers, she offered to leave her car, get into the car the young men were in and tag along as they ran their errands. They then drove with her to the hardware shop and left her and Tawanda in the car. When the two cousins got out of the shop, the abduction was already in progress. They said Tawanda was stuffed into a white Isuzu twin cab and they were taken to Bulawayo central police station along with Tendai Masotsha.

To their surprise, police later let Tendai Masotsha go, despite her allegedly having been the one in possession of the fliers they were apparently arrested for. They never saw Tawanda at the police station and they had no idea where he had been taken. Advent Mathuthu spent the night in police custody and Amandlenkosi was released after the lawyer intervened.

It is still a mystery why Tendai Masotsha was released and why she had insisted on tagging along with the young men and how the state security agents who pounced on them knew exactly where to find them.

It has been almost two months since the abduction but the MDC Alliance claims they are still investigating one of their leader’s roles in this crime.

The next morning, Nqobani Sithole filed an urgent application (habeas corpus) to get a magistrate to order the police to produce Tawanda. The hearing was set for Saturday the first of August.

The second day and night passed and there was still no news and no sign of Tawanda.

On Saturday 1 August, the habeas corpus was granted and police were ordered to produce Tawanda within 72 hours. I was petrified and outraged. I posted this on Twitter, on my page @mamoxn this time:

“72 hours from the time this was granted,

This judge is saying to people who disappeared

&Had him all of Friday,

Ok you can keep him tonight,

Some time during his disappearance I had sent this message to Tawanda’s phone in the hope that he might see it:

“We will find you Tawanda, Don’t worry”.

At around 11pm, I checked my phone and found four disjointed, undecipherable messages had come in from Tawanda’s phone at 9:46pm saying:

I immediately called the lawyer Nqobani Sithole, who then told me Tawanda had been dumped some 3km from his uncle’s house. Alive, but badly tortured. They sent me pictures of his damaged buttocks and my relief at his being found turned into one of the worst heartbreaks I have ever experienced.

All I could do was just break down and cry.

Zimbabwe is in the hands of criminals. DM/MC