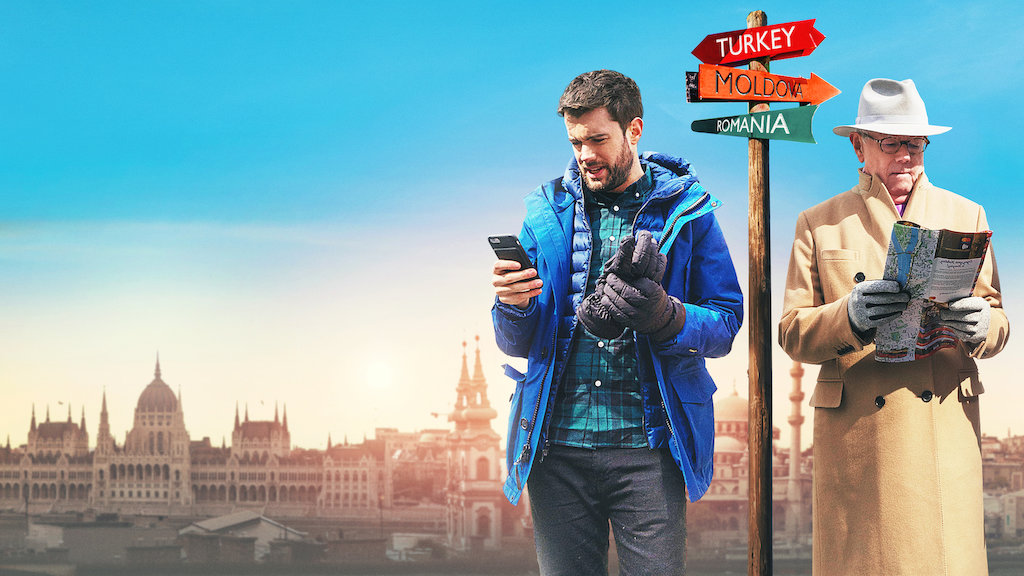 The new season of Jack Whitehall: Travels with My Father sees the famous comedian dragging his intolerant octogenarian dad to the Australian outback.

We can all think of characters we love to hate. Joffrey Baratheon, Jar Jar Binks, or the Queen of Hearts. Rarer are the characters we hate to love – the characters who are genuinely terrible people but we can’t help loving them anyway, whether it’s for their humour or their no-shits-given attitude. Jules Winnfield, Wolverine, Saul Goodman, Sherlock.

This weekend we’re watching a comedy travel show starring a grumpy old jerk who you can’t help but grow fond of.

For those who aren’t familiar with Jack Whitehall, he’s a British comedian and actor with a demeanour that reminds one of an adorable labrador puppy wagging its tail after having just chewed up your slippers. If you were feeling generous, you could describe him as a British Trevor Noah.

The pitch for Travels with My Father goes like this: having started out in comedy at 17 and seriously hit the big time in the decade since, Jack decides to live out the experiences which his 17-year-old friends went on to have, and take a travel gap year. However, being an inveterate smartass, he decides to bring his father along because he “thought it would be funny”. Well, he thought right.

Despite the show’s name, Jack Whitehall isn’t really the star of the show. Sure, he narrates it, but the soul of the series is Jack’s 80-year-old father, Michael Whitehall. Michael is a man of another age. He is a traditional British colonial who gives the expression of an old bulldog who’s just been blamed for your chewed up slippers and told that he’s a very bad boy. He’s also the least likely person to voluntarily leave his house, let alone England.

Jack Whitehall: Travels with My Father

“I’m not a keen traveller,” he says, folding and packing a large tie into his suitcase.

“In case we meet someone decent, like an ambassador or something. Oh, somebody’s put shorts in here – absolutely no way!”

It’s a classic set-up: mischievous peppy son whisks away his grumpy conservative dad in search of an authentic gap-year experience “slumming it” in hostels on the other side of the earth. There’s one more thing you need to know about Jack’s father: he’s a disrespectful, intolerant, elitist twat. Jack puts it like this:

“He is very bad with foreign food. That sentence also works if you take out the word food and replace it with pretty much anything, [including] people.”

Michael’s considerable arrogance and closed-mindedness is exacerbated by his having acquired that disturbing (yet often entertaining) trait seen in some old-timers, of paying absolutely no heed to what comes out of his mouth. Get ready for quite a lot of, “Daddy, you can’t say that!” It’s highly amusing and one has to begrudgingly admit that it’s a little endearing, too.

Jack has a disrespectful streak himself, but most of the time it manifests in bashful, mocking jabs at his posh, uptight dad, many of which go unnoticed. Jack goes to extreme lengths to mess with his dad, trying to convince him to go in for things like face-slap massage or naked yoga. Very occasionally, one does feel for the old chap, but mostly it’s simply satisfying to watch this pompous prick being put into uncomfortable situations.

The pair start off the first season with classic Western tourist gap-year destinations in Southeast Asia: Vietnam, Cambodia and Thailand. You’ll be treated to wonderful culture shock, resplendent metropolises and dazzling nature, but don’t expect to come away from an episode particularly informed – the best you can hope for is a funny conversation starter about some or other obscure traditional practice. The show is mainly about comedy and personal growth that happens on their journey, rather than the travel itself.

It’s fascinating to witness the airing of awkward daddy issues between a multimillionaire millennial comedian and an emotionally detached octogenarian snob. Each seems to be willing to say anything to wind the other up.

Though Michael’s cruel deadpan teasing of his son is veiled in dark humour, one gets the sense that the pair is only ever half-joking about their complicated relationship – and that makes their progress and rare tender moments all the sweeter.

There are other noticeable changes in Michael as the series progresses – he becomes more outgoing; willing to do things he would never have done in the first season, like voluntarily dressing up as the queen in a drag competition.

By the fourth season, which recently premiered on Netflix, one even gets the sense that he might be putting on much of his disgruntlement. In order to keep up the brand of comedy which fans of the show have come to expect, Michael affects the same level of aversion to the unknown as he did in the first season, but it is less convincing. He barely puts up a fight when Jack suggests some outlandish plan, and you can clearly see the love in his eyes when he looks at his son.

Since the first season came out in 2017, the producers still haven’t released an official statement on whether or not the show is scripted – but one can easily tell by Michael’s unconvincing outrage that at least certain things are scripted. Unfortunately, as the show progresses, the scripting seems to take over more and more, but given the transformative nature of travelling, this was perhaps inevitable from a show that relies on comedic relief from a reluctant traveller.

The first episode of the latest season, set in Australia, features Jack’s mum, which puts a stranglehold on the usual comedy chemistry – her having neither Jack’s wit nor Michael’s zero-shits-given attitude. But once that’s over and done with, it’s back to laugh-a-minute comedy gold.

Though there may or may not be more scripting than there was in the early episodes, it does little to diminish the show’s entertainment value.

Jack Whitehall: Travels with My Father is fun, light viewing. Jack didn’t get to be a famous comedian for nothing; not even his killjoy old man can get him down. With regard to Michael himself, it’s uplifting to discover that “old dogs can learn new tricks”, and despite all the reluctance he can muster, it’s a pleasure to watch his jagged edges turn smooth. DM/ML

Jack Whitehall: Travels with My Father is available on Netflix.
You can contact This Weekend We’re Watching via [email protected]