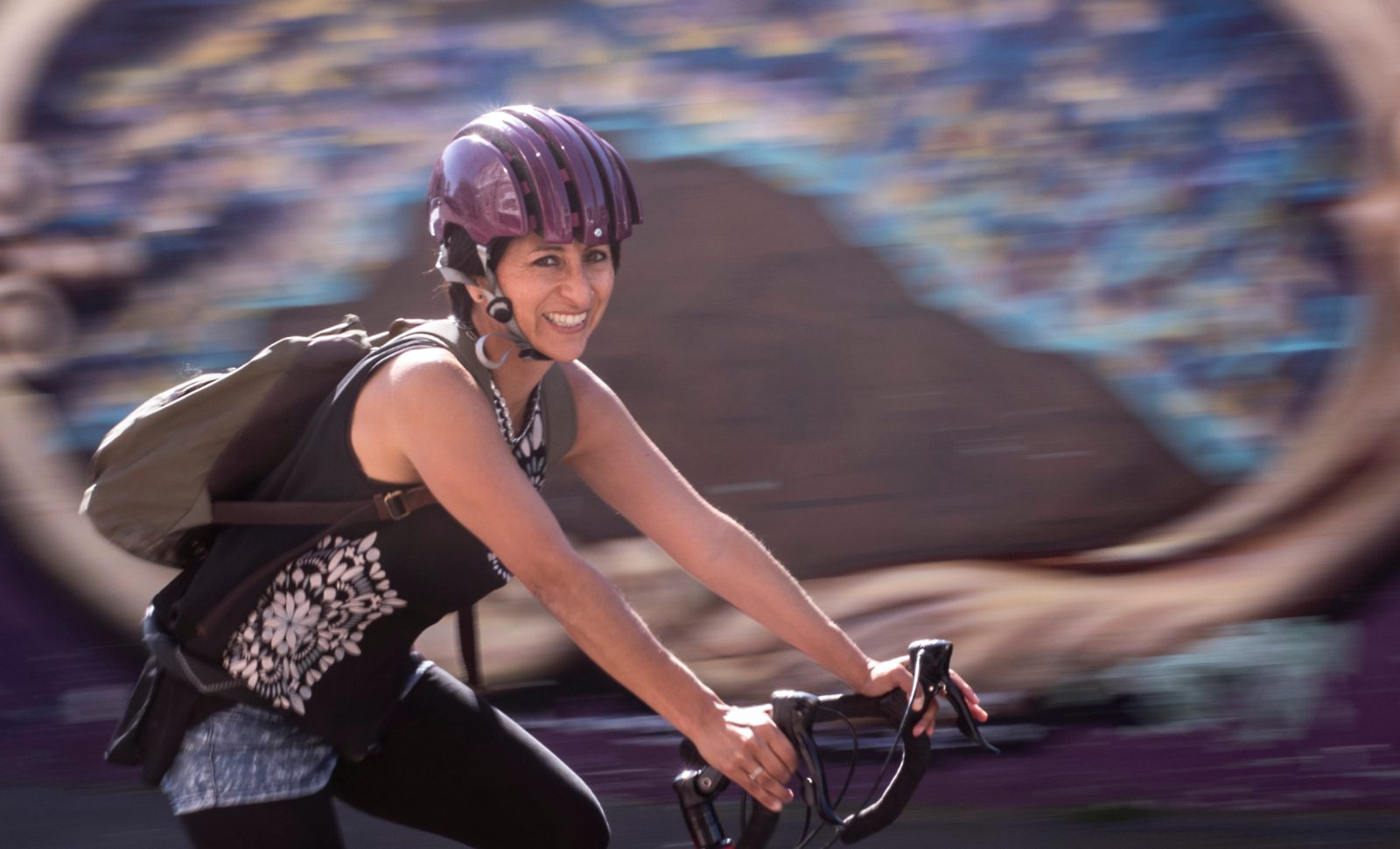 In Marcela Guerrero’s childhood in Colombia, every Sunday 120km of Bogotá’s city streets were cordoned off. ‘As a young girl, we spent every Sunday playing in the streets, which were closed off to cars,’ she says. ‘That’s just what we did on Sundays. It was like going to church, a community tradition.’ This was the idea she wished to bring to Cape Town.

What struck Marcela Guerrero Casas when she first moved to South Africa in 2006 was that the Gini coefficient here was very similar to that of her home country, Colombia.

“It does get under my skin, you know, this gap between rich and poor,” she says. “I feel like I relate to it in a very personal way.”

Marcela’s awareness of inequality stems from her childhood in Bogotá. The 40-year-old social and urban activist goes on to explain that — to this day — she is pigeonholed in Colombia based on the high school she attended. Speaking over Zoom from a sun-washed Cape Town apartment, she says: “Colombia is like South Africa, you know, the tensions, the social class system that’s so ingrained.”

Marcela has short dark hair and lively eyes. She gushes her truth in long, impassioned sentences:

“For example, last year while in Bogotá. Dustin, my partner [who is South African], was like: ‘Okay, this is really funny and strange, but people still ask you where you went to school.’ In Colombia, whether you went to an expensive private high school or not, is very important. The school is a big indicator of class. I mean, similar to here in South Africa.

“So most people who can afford it send their kids to private school. If you have a lot of money, you send them to a bilingual school or an American school. I went to a good academic school. It was not a public school, but it was a school that was sort of subsidised, with parents paying according to their salaries. So I attended a mixed school, with a lot of kids from various backgrounds.”

“I remember talking to my one uncle, once,” she adds. “He now lives in the United States, and he would say to me: ‘It’s in your head Marcela, this idea of class. You just need to get rid of it, it doesn’t exist.’ I thought about it a lot. Maybe I am a little bit too obsessed, I acknowledge that. But quite tangibly, I found that unless you belong to certain circles, it’s really difficult to find work in Bogotá. And people need to speak about these things.”

While cycling is now key to Marcela’s activism — as she advocates for greener, car-free cities — the sport of her youth was tennis.

“My memory of people who cycled is people who couldn’t afford a better sport,” she says. “Cycling was for poor people; wealthy people played tennis. And even though we moved in very middle-class circles, my parents wanted us to play tennis. So I always had to go to very expensive private clubs, always with the sense that: ‘Oh my gosh, I don’t belong here!’ Well, fast forward to 1998. I left Colombia on a tennis scholarship to study in the United States. So that was my ticket out into the world.”

After completing a BA in International Relations at Kennesaw State University in 2003, Marcela won another scholarship to complete an MA in Public Administration at Syracuse University in 2006. Her first job was as an outreach assistant in Johannesburg for Civicus, World Alliance for Citizen Participation, where she worked with famous South African activist Kumi Naidoo. Formerly the leader of both Greenpeace and Amnesty International, Naidoo made world headlines in 2012 when he chained himself to a passenger ship in the Arctic Pechora Sea to protest against drilling for oil there.

Why did Marcela choose Johannesburg?

“After studying, I thought it was time to go back to Colombia,” she says. “Which I did for a while, but it wasn’t the right place for me. I had taken a class on development in sub-Saharan Africa and decided to move to Nairobi because a lot of international organisations were based there. Then I got the Civicus offer in Johannesburg. By the time I was offered a job in Nairobi, I was already too happy in South Africa.”

Later in South Africa, Marcela worked for US non-government organisation Freedom House and farm workers’ group Fairtrade Africa. Gradually, her focus shifted from global to local. In 2013, along with a few likeminded people, she registered the non-profit organisation, Open Streets Cape Town.

“When I first arrived in Cape Town, I was still in advocacy for Fairtrade,” she says. “What converted me was a conversation with a friend. He said to me: ‘You know, there’s something very beautiful about working specifically for the place where you choose to live.’ I realised then I wanted to do something local, very much about the place where I lived. So my previous work was continental and regional. Whereas Open Streets was about neighbourhoods; practical things with real people, short term results, long-term dreams.”

In Marcela’s childhood, every Sunday 120km of Bogotá’s city streets were cordoned off. “As a young girl, we spent every Sunday playing in the streets, which were closed off to cars,” she says. “That’s just what we did Sundays. It was like going to church, a community tradition.”

This was the idea she wished to bring to Cape Town. And soon Open Streets Days dotted the city’s calendar with safe pedestrian playgrounds scheduled across the metro: notably in Observatory, Langa, Bellville, the CBD’s Bree Street, and in Mitchells Plain. Access was free. The events saw streets void of cars but packed with families and friends — laughing, ambling, skating and dancing, or simply staring at building facades normally hidden behind a blur of traffic.

In 2019, Marcela handed over the reins of Open Streets Cape Town as she and her partner headed back to Bogotá to pursue projects promoting “car-free” or “car-light” transport, among other things. But the couple missed South Africa and returned on March 17, just before lockdown.

Barricades and orange cones kept traffic out, while police and public officials enforced a watchful eye. Kids played hopscotch and whizzed around on small bikes as teenagers flipped skateboards. There were reading corners, bright gazebos, breakdancers and public speakers. At one event, South African batsman Omphile Ramela addressed the crowd, relaying how many South African cricketers first honed their batting skills on the street.

“The goal was to repurpose roads as safe spaces for communities to play in,” says Marcela, “while also prompting Capetonians to visit areas they would not normally see. The greater trajectory was to build bridges in a spatially divided city.”

There were challenges. Marcela recalls first proposing Open Streets Days to Cape Town city officials, with one replying: “We teach children not to play in the street, now you’re telling them the opposite?” But in time she got the required permits. Soon, she relays, this same official became their biggest fan:

“He was saying we must please make the enclosed roads longer, so more people can participate. He became our biggest champion.”

She recalls opposition in Mitchells Plain leading up to the first Open Streets Day there in 2016:

“People were saying: ‘Why have it on a Sunday? God will not be happy with us’. Then at this one community meeting, a woman stood up and said: ‘No, we must be open to change; my kid has never played on the street before, this will be his first time. What better way to spend a Sunday? God will be very happy for us.’ In the end, we had to do very little to get people involved there.” About 10,000 pedestrians attended their first event in Merrydale Avenue, in Mitchells Plain.

In 2019, Marcela handed over the reins of Open Streets Cape Town as she and her partner headed back to Bogotá to pursue projects promoting “car-free” or “car-light” transport, among other things. But the couple missed South Africa and returned on March 17, just before lockdown.

Back in Cape Town, she’s working as a consultant. One project close to her heart seeks to improve public spaces and safety in Observatory. Marcela notes how lockdown has exacerbated inequality, with more homeless people on city streets.

“Safety is a massive, massive issue,” she says. “I mean, obviously with public transport in the city, we already have so many problems. With public transport not being safe, reliable or affordable to some people. You know, the fact that the trains aren’t working. So sometimes, to be honest, it’s difficult to be hopeful. Although like many people, during lockdown I saw signs of solidarity that I wasn’t expecting. And that’s where hope lies, you know.”

“And to me, that’s so inspiring,” says Marcela. “Because it really has been this sort of seed that we collectively created or planted at Open Streets. In the city, and in our personal lives.” DM/MC