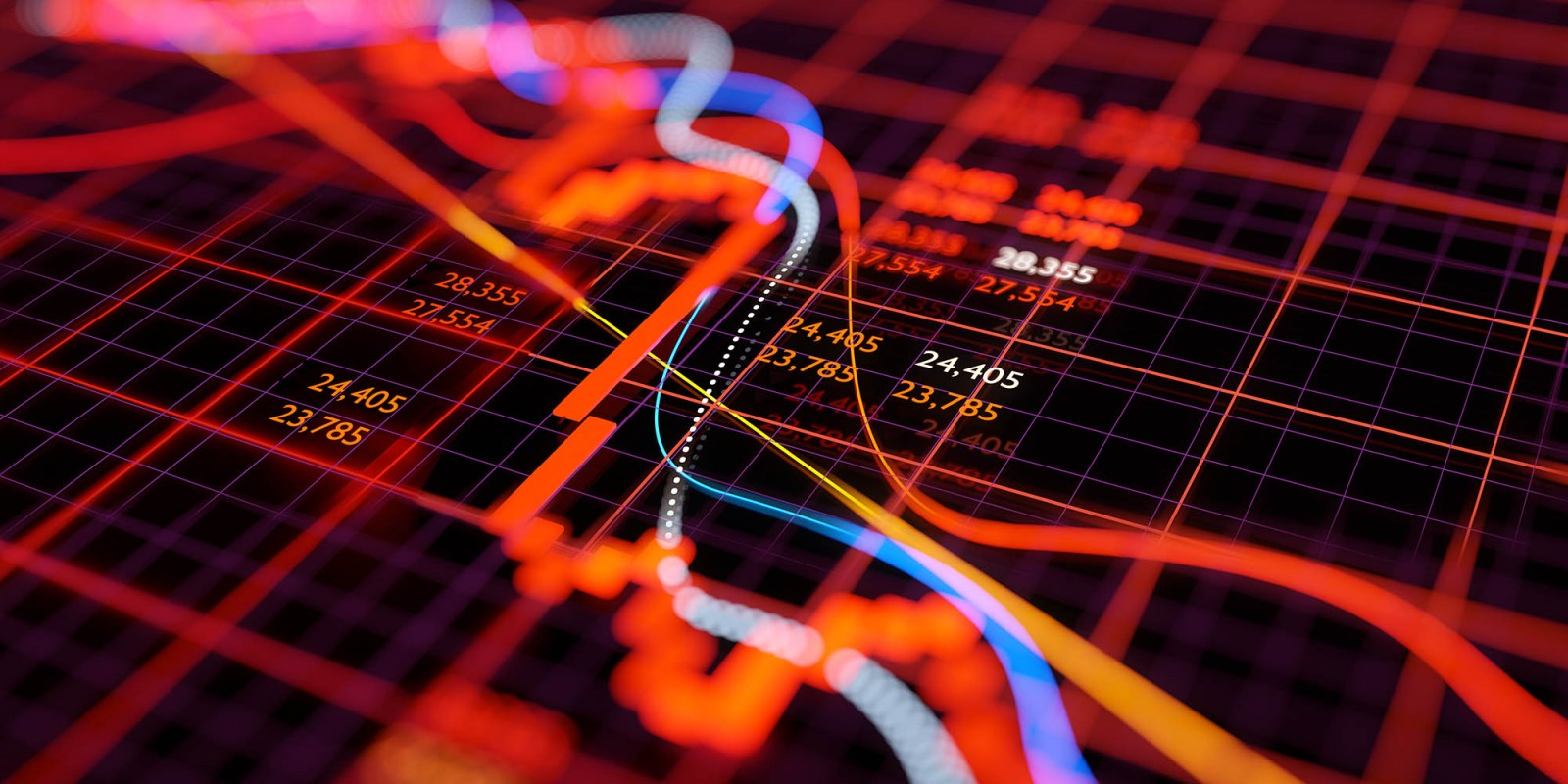 Some of the worst market crashes have occurred during the infamous 10th month of the year, namely Black Tuesday, Thursday and Monday in 1929 and Black Monday in 1987. (Image: Adobe Stock)

October has been given a bad rap in financial markets historically – and perhaps deservedly so. Together with the US elections heading for an uncertain outcome, escalating Covid-19 infections and an unsteady economic recovery, we will need to keep our wits about us to make it through to the end of the year intact.

October is around the corner and, if current trends continue, stock markets will be on the back foot as they head into a month historically perceived as the most challenging and volatile month of the year.

Often referred to as the October Effect, Investopedia describes this as “a perceived market anomaly that stocks tend to decline during the month of October”.

History shows, however, that there is substance to this perception. Some of the worst market crashes have occurred during the infamous 10th month of the year, namely Black Tuesday, Thursday and Monday in 1929 and Black Monday in 1987. On October 19 1987, the Dow lost 22.6% in a single day. Panic-selling was also seen during October in 1907 and the 2008 financial crisis when the S&P 500 declined by a hefty 16.9% during the month.

John Mauldin, author of the Thoughts from the Frontline newsletter, recently shared a telling graph put together by macroeconomic and currency analyst Brent Donnelly. As shown below, it shows the average path of equities since 1990 and captures a steep selloff in equities from mid-September into October.

Mauldin’s takeaway is that historical caution is warranted at this point – and he has good reason to recommend that, because many factors are looming large over financial markets as we head into October. 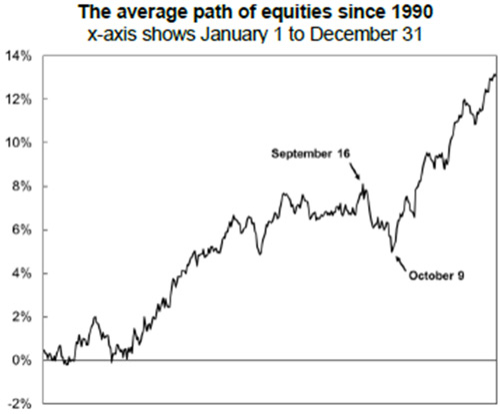 Over the past few weeks, the general sell-down in equities, spurred by investors offloading tech stocks, has seen equities come off their historical highs and return into negative territory year to date. At the beginning of this week, the S&P 500 was 5.5% in the red year to date and more than 7% off its recent record high. The FTSE All-Share Index is almost 7% lower than its January starting level and 3.6% lower than at the time of the global selloff in tech stocks earlier this month.

For many, the correction is viewed as long overdue after a seemingly unjustified, but extended, rally in stock markets off March’s bear market lows. A year ago Forbes journalist Sergei Klebnikov’s assessment of the financial markets could have been written in September 2020:

“With the S&P 500 at just over 17% gains for the year, investors are starting to become more cautious as they worry that the bull market is running on fumes. Lack of progress on a trade deal continues to dominate the headlines, while at the same time, economic growth is slowing, leaving investors to grapple with fears of a recession.”

Events over the coming month will determine whether the September selloff is a sufficiently large, and ultimately healthy, correction that will restore equilibrium to the stock markets.

In the graph below, Blackrock has captured the range of performance of the different asset classes this year and the returns they have delivered year to date. Brent crude has covered the most ground and remains deep in the red, while the gold price has managed to hold on to its gains after trading across the spectrum and into the red for a period. 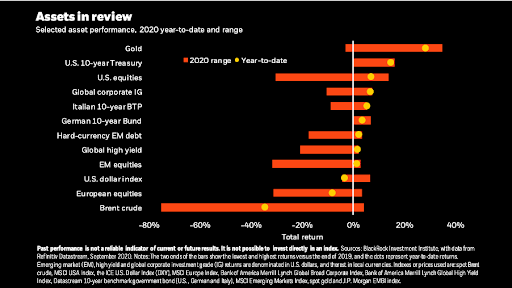 A useful indicator that encapsulates the level of turbulence in equity markets is the Volatility Index (VIX). The VIX has also traded in an extraordinarily range this year, as seen in the graph below, reflecting the unprecedented nature of the challenges we have had to face this year. In the wake of the March selloff, the index did settle into a 20% to 40% trading range – still higher than its historical average – before picking up again over the last week. For now, it remains well below the 82.7% peak in mid-March when markets fell off a cliff. 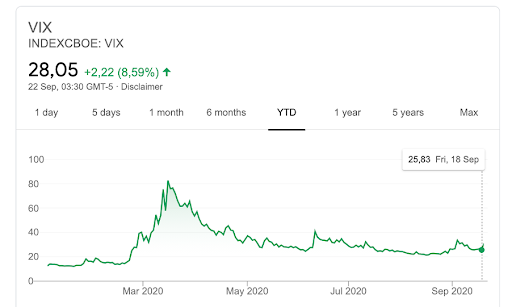 Oil prices are also signalling a worrying shift in the macroeconomic tide, with the Brent crude oil futures falling 4% on Monday to less than $42 a barrel, as shown in the graph below, after recovering some ground to trade above $43 in early September. 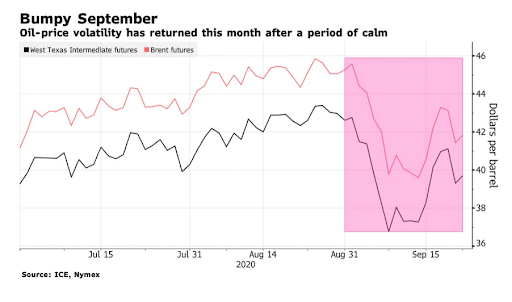 BlackRock warns of more volatility to come ahead of the November US election, after months of “steady advances in risk assets”. The world’s largest investment manager pinpoints the following contributing factors to the recent uptick in volatility and stock market selloff: negotiations over a new US fiscal package, which are dragging on; the pandemic, which is still spreading in many countries; and US-China tensions, which are still running high.

UBS Global Wealth Management chief economist Paul Donovan says the rising virus cases are causing investor concerns to mount and adds, “it is fear of the virus that matters economically”. Sentiment is a critical determinant of investor and consumer behaviour.

Donovan says markets tend to underestimate people’s ability to adapt in the face of adversity. In an assessment reminiscent of South Africa’s pre-Level 1 lockdown challenges, he notes: “While UK pubs closing at 10pm is a grim prospect, it is possible British consumers will find other ways of obtaining beer, for instance.”

BNP Paribas agrees that the resurgence in the number of virus infections is gaining the markets’ attention again. “The focus is now on western Europe, where new case numbers have continued to rise across several countries, even if for the time being hospitalisations and fatalities remain relatively low.”

Although a longer-term double-edged sword, the silver lining in the short term is the trillions of dollars of already extended fiscal and monetary support that will provide some support for financial markets and economies during what is gearing up to be a tricky October. 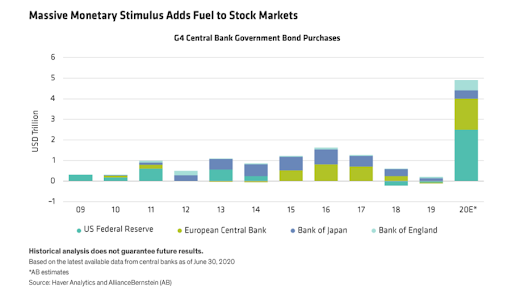 The next round of fiscal benefits is generally viewed as still a necessity in many countries, particularly if infections continue to rise and more lockdowns need to be put in place. Donovan is not optimistic on the likelihood of politicians signing off on the second round of US fiscal support.

He says: “Hopes for a fiscal package before the November election have fallen, as a vacancy on the US Supreme Court will increase political polarisation and shift political focus.”

On the fast-approaching US elections themselves, BNP Paribas highlights the risk of the election contest becoming litigious, “hence delaying the result and the removal of uncertainty for the markets”. It says this will see October VIX futures levels increase again, as well as November levels, “with an ensuing risk of an S&P 500 index correction”.

AllianceBernstein chief investment officer Mark Phelps does an excellent job of summing up where we stand: “Clearly, there are major risks that should not be underestimated, and volatility is likely to remain high. The overall breadth of the market, in which a few very highly valued companies are driving the market, is a concern. Given this background, the September declines are a warning for investors to expect potential further drawdowns.”

In South Africa, few are likely to remember that Black October was the moniker ascribed to the Spanish flu outbreak in 1918, when about 300,000 South Africans died during the month. As a result of the country’s mismanagement of the crisis, South Africa became the fifth-hardest-hit country worldwide.

Globally, 50 million people died of Spanish influenza. As we head into another October just over a century later, the Covid-19 death toll is closing in on 1 million deaths, with more than 31 million infections recorded globally. Though the numbers are smaller, the economic toll has been unprecedented.

Initial indications are that we are also likely to experience a historically unprecedented Black October, during which a toxic mix of health, political and macroeconomic events bear down on stock markets that have few fundamental underpinnings right now.

Getting through to the end of the year intact will require the iron-cast resilience and level-headedness necessitated by the onset of this first truly global pandemic and synchronised economic crisis. BM/DM