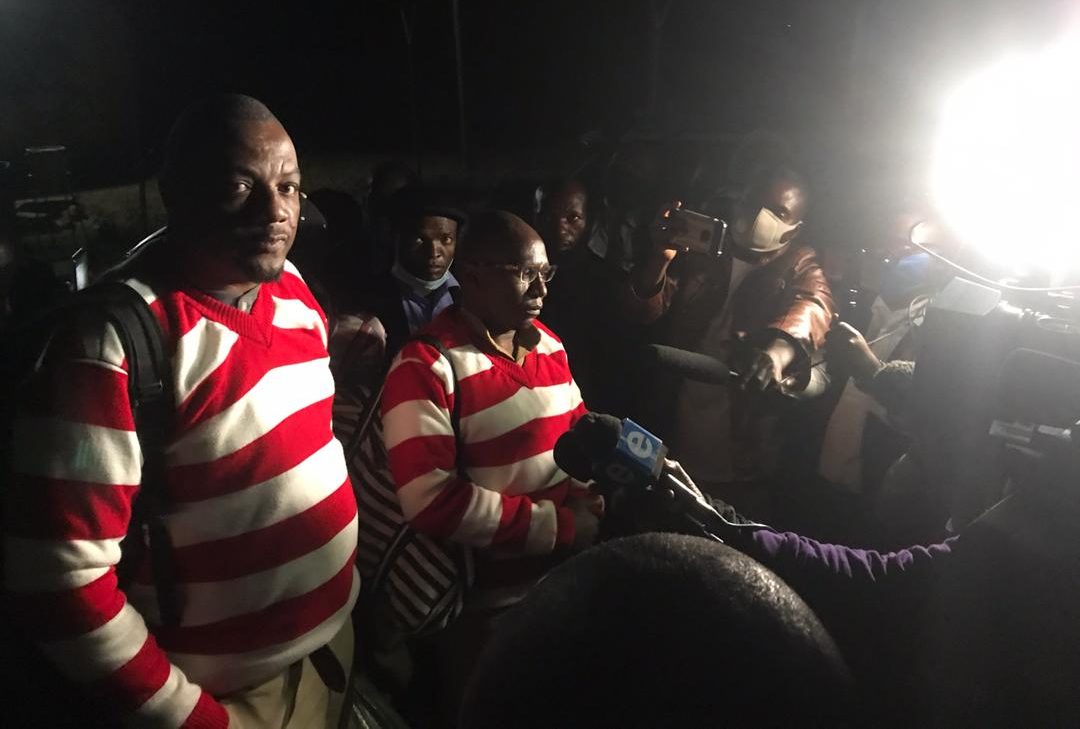 The release comes after four previous attempts by the two men since their arrests on 20 July.

After spending at least six weeks in detention without trial on charges of “incitement to participate in a gathering with intent to promote public violence”, freelance journalist Hopewell Chin’ono and his co-accused, political activist Jacob Ngarivhume, were on Wednesday 2 September granted bail by the High Court in Harare.

The two men appeared before different judges and were both granted their appeals against bail rulings made by a magistrate’s court last week. Chin’ono and Ngarivhume were released on varying stringent conditions. They were separately arrested but jointly charged on 20 July.

Granting bail to Chin’ono, the court said his health was also taken into consideration. The whistle-blowing journalist was granted bail on condition he lodges ZWL$10,000 (R473) with the clerk of court, surrenders his passport and title deeds, resides at his given address and reports twice a week to the police. Chin’ono is also required not to post on his Twitter account or to create any other Twitter account to incite the holding of mass demonstrations until the end of his matter.

He will appear in court again on 14 September. Speaking to journalists after being released from Chikurubi Maximum Security Prison, Chin’ono said:

“What I saw back there validates the claims I have been making that money is being stolen by this government. The prison hospital has nothing, they couldn’t even check my high blood pressure. Looting of public funds and plundering of resources must stop.

“I remain strong. The government made a mistake taking us in there because we only used to hear about it but now we know and we can write authoritatively about those things. They have removed me from Twitter, but now I will write from Facebook and also for local media sharing my experiences.”

Transform Zimbabwe leader Jacob Ngarivhume was ordered to deposit ZWL$50,000 (R2,370) bail with the clerk of court, surrender his passport, report three times a week at Waterfalls police station in Harare and reside at his given address. Ngarivhume is also required not to post anything on the Twitter handle the judge specified until his matter is finalised.

The bail relief comes after four previous attempts since their arrests on 20 July. The state alleges the two men “incited people to revolt against President Mnangagwa’s administration during some planned anti-govt protests called for on 31 July.”

Zimbabwean journalist Hopewell Chin’ono is still trying to get bail

One of Chin’ono’s lawyers, Doug Coltart, told Daily Maverick, “We are happy that our client has been granted bail, but the fact that he has been incarcerated all this time is a huge injustice. The bail conditions are overly stringent and restrict his constitutional rights.”

The ailing journalist is still “waiting for the diagnostic tests from his Covid-19 tests”, Coltart said.

Ngarivhume’s lawyer Harrison Nkomo said: “It has been a very long, tortuous and bruising battle, but we are pleased at long last he has been [granted] bail, however stringent.”

Shackled and clad in khaki, red and white prison regalia, Ngarivhume was in a defiant spirit.

“Our hope for a new Zimbabwe is renewed and invigorated. We dream of a Zimbabwe free of corruption, that respects human rights, the rule of law and we will never relent on that. We are very strong and 45 days of detention will never move us an inch from the things that we believe,” Ngarivhume said.

Zimbabwe Lawyers for Human Rights  (ZLHR) carried out a silent protest at the High Court, lobbying for respect of the rights enshrined in the Zimbabwean Constitution. The lawyers put flowers in front of a placard at the court entrance. The placard listed constitutional rights that have been violated in recent weeks, particularly the freedoms of assembly, expression and the media.

Other activists and journalists on trial

The prosecution in the matter of Masvingo Urban Ward 4 Councillor Godfrey Kurauone of the main opposition MDC Alliance on Wednesday withdrew “criminal nuisance” charges levelled against him for singing an anti-Mnangagwa song at a funeral.

Kurauone remains in custody on yet another frivolous charge and will appear in court on Thursday 3 September charged with “obstruction or endangering free movement of people and traffic”.

Two journalists, Sam Takawira and Frank Chikowore, were detained for four days and freed on ZWL$500 bail in May on charges of contravening Covid-19 regulations. They were arrested at a private hospital while working on a documentary titled Is there Freedom Under Lockdown? How Covid-19 Is Being Used to Attack Democratic Rights in Zimbabwe.

Takawira and Chikowore had gone to interview three victims of alleged state-sanctioned abduction and torture: MDC Alliance member of Parliament Joana Mamombe, and youth leaders Cecilia Chimbiri and Netsai Marova, who are also before the courts for allegedly faking their own abduction.

MDC Alliance vice-chairperson Job Sikhala remains in prison awaiting the outcome of his bail application, which will be given on Thursday 3 September. Sikhala is charged with “inciting public violence”, in relation to the stifled July 31 planned protests which were called by Ngarivhume. Last year Sikhala was charged with treason but later acquitted.

The director of the Media Institute of Southern Africa (MISA) in Zimbabwe, Thabani Moyo, told Daily Maverick, “The issue of Hopewell and colleagues who have been attacked during the tenure of this administration which came into power promising to break the past is that media freedom is on trial in Zimbabwe and it is our Constitution under siege.

“Today’s [bail] judgment does not set Hopewell free, all they say is they’re going to pursue him from a different location. In a constitutional democracy you must be able to speak, express, expose ills of society knowing that the Constitution is the pillar you lean on if any grouping or force tries to attack.

“We are seeing structured attacks on the media by those who are wielding the powers and we have got the ultimate voice in terms of how you are viewed in terms of your standing in the society. Hence, our call as MISA Zimbabwe is that the government of Zimbabwe has a prerogative role to defend the Constitution now rather than later.”