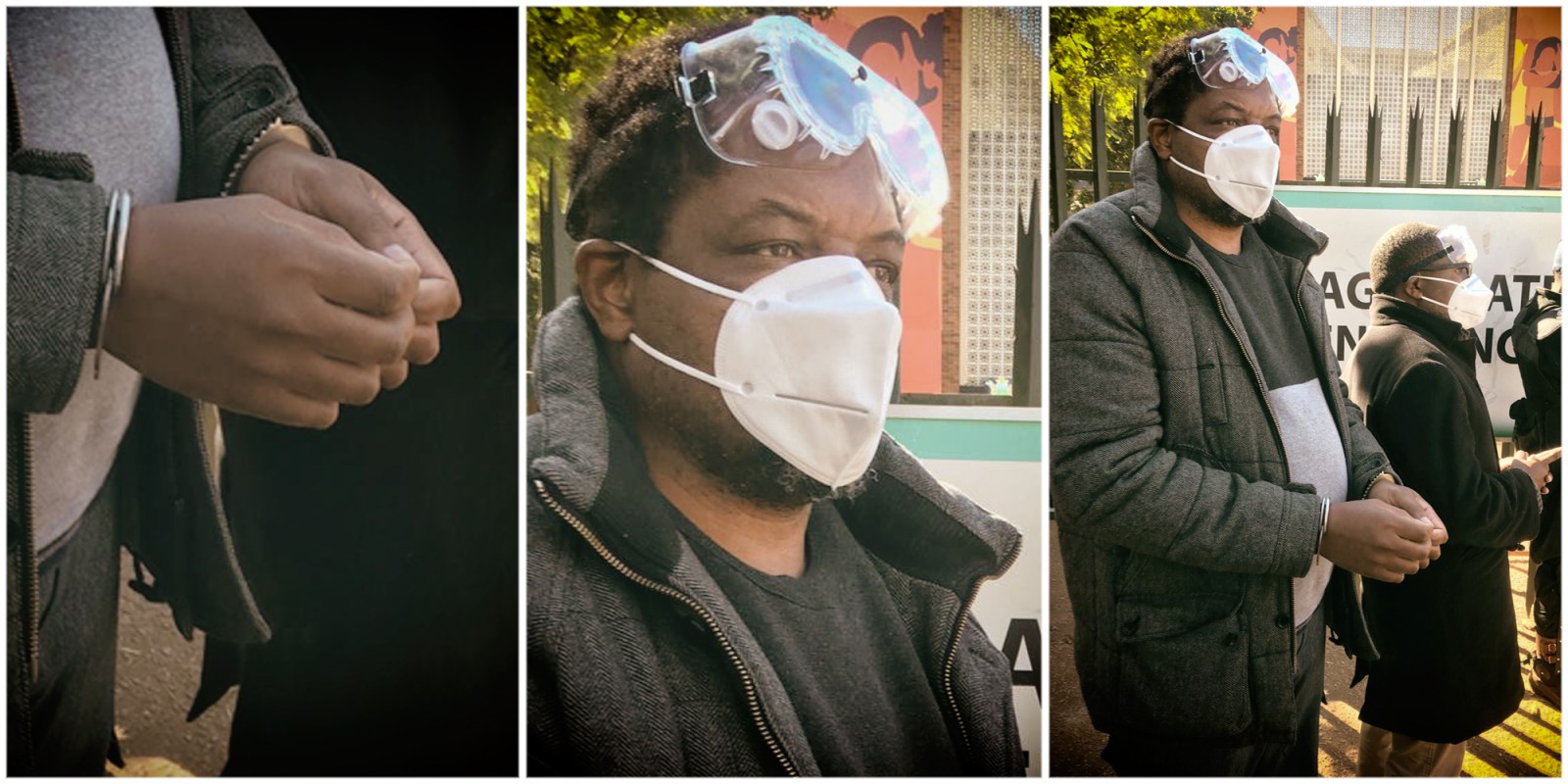 Investigative journalist Hopewell Chin’ono was in good spirits when he left the Harare Magistrate’s Court, raising a clenched fist as he boarded the Zimbabwe prison services truck with fellow inmates to return to remand prison. His next court appearance is on 7 August.

“I’ve been denied bail because I reported what the organisers of the #31July demonstrations said. Journalism has been criminalised. The struggle against corruption should continue”, arrested Zimbabwean journalist Hopewell Chin’ono said on Friday.

Chin’ono was arrested at his home on Monday 20 July and accused of supporting calls by Jacob Ngarivhume for a planned protest against corruption on 31 July. Ngarivhume was also arrested separately on the same day, but charged with Chin’ono and alleged to have contravened Section 187(1)(a) as read with section 37(1)(a)(i) of the Criminal Law [Codification and Reform] Act: “Incitement to participate in public violence.”

The two appeared in court separately with Ngarivhume the first to be denied bail by Magistrate Trynos Utahwashe and remanded in custody to 14 August.

Chin’ono is accused of using his Twitter account @daddyhope to call for the removal of a constitutionally elected government through an uprising. It is not yet clear who deleted Chin’ono’s Twitter account at the time of his arrest.

The state opposed bail on the grounds that Chin’ono was likely to interfere with witnesses and that his reporting and social media messages may incite the public to demonstrate against the government on #31July.

Ngarivhume, who leads non-government organisation Transform Zimbabwe, called for nationwide demonstrations against corruption and was echoed by Chin’ono on his Twitter account. The message was received by many Zimbabweans on social media.

Earlier in July, Zimbabwean authorities banned prison visits after four prison officers and seven inmates tested positive for Covid-19. There are growing fears of an outbreak in the overcrowded prisons.

“Hopewell’s detention is clearly unjust and unjustifiable, in particular the refusal to allow him to wear PPE in prison and allowing us to sanitise his cell. It’s unjustifiable and places him at serious risk, given that there is currently an outbreak of Covid-19 in the cells.

“It betrays governments sincerity in claiming that they are arresting them due to fears around Covid-19 when in fact they are not taking necessary and easy precautions to actually prevent them from catching the virus themselves,” said Coltart.

At the request of his lawyers, Chin’ono was upon his arrest allowed to wear goggles, overalls and a mask, but later officials allowed him to wear only a mask at his appearance in court.

Authorities have denied accusations of wrongful and unjust incarceration and victimisation of journalists, and suppressing dissent.

Addressing journalists at a press conference in Harare on Saturday, the Minister of Information, Publicity and Broadcasting Services, Monica Mutsvangwa said:

“We have noted with dismay a well-co-ordinated local and international misinformation and disinformation media campaign where Chin’ono and Ngarivhume are said to have been arrested for supposedly exposing alleged corruption cases in Government.

“Hopewell Chin’ono was not abducted, but was lawfully arrested by the Zimbabwe Republic Police, not for exposing corruption, but for using his social media accounts to incite Zimbabweans to violently overthrow the government.

World-acclaimed playwright and filmmaker Tsitsi Dangarembga was the first person to stage a one-person demo at Chin’ono’s house soon after his arrest. Dangarembga has not stopped protesting, with other ordinary citizens joining her in various demonstrations.

“President Mnangagwa ordered an investigation into the Drax Affair before Hopewell Chin’ono started tweeting about it. As a result of those investigations, several arrests were made including the former Minister of Health and Child Care, Dr Obadiah Moyo who has since been relieved of his duties.

“Many other journalists have reported extensively on corruption, but none of them have been arrested for publishing the same. It is therefore false to state that no action has been taken against the corrupt individuals fingered by Hopewell’s exposé”, said Mutsvangwa.

There has been widespread condemnation of the arrest of Chin’ono, both domestically and internationally after he ran an exposé of a $60-million Covid-19 procurement scandal by Drax International, a company allegedly linked to the first family.

Drax is alleged to have misrepresented itself as a manufacturer of drugs and medical equipment, resulting in it being illegally awarded contracts for the procurement of coronavirus test kits and equipment worth more than $60-million. This was done without following tender procedures due to the facilitation by former Health Minister Dr Obadiah Moyo, resulting in Drax overpricing government procurement.

World-acclaimed playwright and filmmaker Tsitsi Dangarembga was the first person to stage a one-person demo at Chin’ono’s house soon after his arrest. Dangarembga has not stopped protesting, with other ordinary citizens joining her in various demonstrations.

Constitutional lawyer and Secretary-General of the MDC-T, Douglas Mwonzora, told Daily Maverick he believed the arrest was motivated by the exposé of the Covid-19 scandal.

Amanda Atwood wears huge placards while walking through the capital’s streets, showing her solidarity for Chin’ono and Ngarivhume.

“I’m expressing my frustration and doing so, it is not disrespectful or disloyal or even illegal. We have a constitution which actually is progressive and if we were respecting it, we wouldn’t be facing some of the problems we are facing as a country.

“It is up to us to make sure that the government respects the constitution, our rights, treat us with respect and respects its obligations to manage the country well and protect the people”, said Atwood.

Alliance for People’s Agenda (APA) Dr Nkosana Moyo told Daily Maverick: “The lesson we take from the November 2017 coup is that fighting corruption was not on their agenda. Hopewell’s arrest is to do with exposing truths. Hopewell was very diligent and presented his story with irrefutable facts, now they want him out of the way” said Moyo.

Constitutional lawyer and Secretary-General of the MDC-T, Douglas Mwonzora, told Daily Maverick he believed the arrest was motivated by the exposé of the Covid-19 scandal.

“What the government should do is to deal decisively with corruption and not just arrest journalists”.

“The role of the media activism is to demonise the country and create alarm at international level to gain international sympathy and condemnation resulting in the isolation of Zimbabwe.

“The ongoing onslaught on alleged corruption driven by the likes of Hopewell Chin’ono is part of the strategy to foment an uprising. Corruption is a cancer affecting every Zimbabwean and should not be politicised or allow foreign interventions lest we destroy our own future,” said Masarira. DM