Zimbabwean journalist Hopewell Chin’ono is still trying to get bail 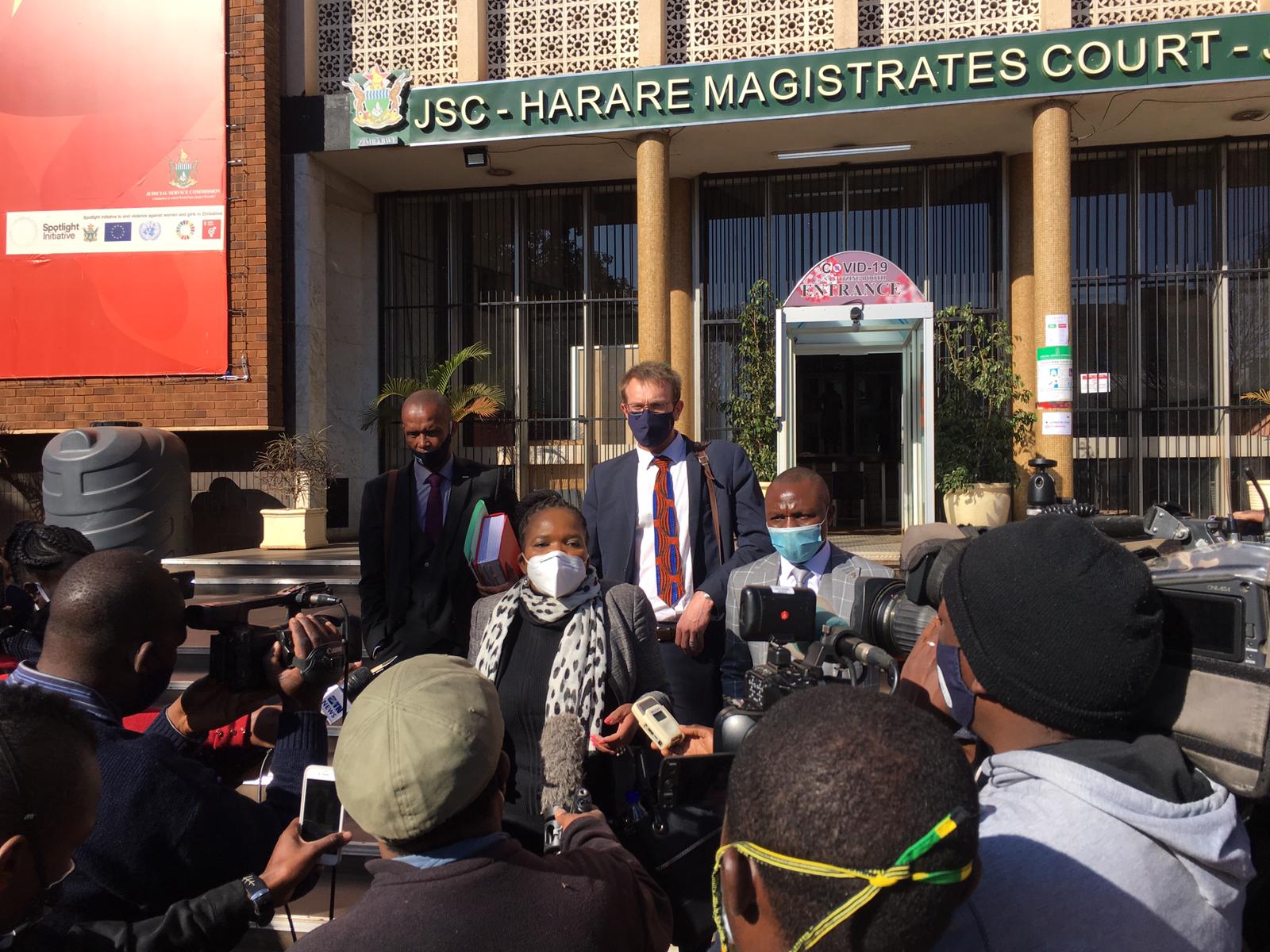 Chin’ono is not being allowed food from outside and has been surviving on water and biscuits. His lawyers are not allowed private meetings with him.

The bail application follows previous attempts on 24  July, 7 and 12  of August.

The award-winning journalist was arrested at his home on 20 July, the same day as opposition leader and convener of the planned #31 July nationwide protests against corruption, Jacob Ngarivhume. Both men are both being charged with “incitement to participate in a gathering with intent to promote public violence, breaches of peace or bigotry or alternatively incitement to commit public violence”.

Ngarivhume and Chin’ono have individually been denied bail after 17 days in detention and their hearings have been set for Monday 24 August and Friday 14 August respectively.

Following the denial of his appeal for bail by High Court judge, Justice Tawanda Chitapi on 6  August, Chin’ono was referred back to the lower (Magistrate’s) Court. Appearing before magistrate Ngoni Nduna on 7 August, his lawyer, Beatrice Mtetwa made a fresh application for bail based on changed circumstances.

The changed circumstances are that Chin’ono is not allowed to receive food from outside and has been surviving on water and biscuits. In addition, his lawyers are not allowed private meetings with him.

On Friday 14 August the High Court will preside over the hearing and determination of an urgent chamber application filed by Zimbabwe Lawyers for Human Rights (ZLHR) seeking an order to compel Zimbabwe Prison and Correctional Services (ZPCS) to allow Chin’ono and Ngarivhume to consult their lawyers in private.

They also want ZPCS to arrange for the purchase of or to receive from private sources food, clothing, PPE, bedding and other necessities the two may require.

In what was supposed to be a fresh bid for bail by Chin’ono, State prosecutors made an application seeking the magistrate to bar lead lawyer Mtetwa from representing Chin’ono in court.

State prosecutor Whisper Mabhaudhi accused Mtetwa of posting comments on her Facebook page, “Beatrice Mtetwa and the Rule of Law”. Mtetwa said she did not have any social media accounts, but advised the court that the page is run by a Boston based filmmaker, Lorie Conway.

“Tomorrow [Friday], the court is going to rule on whether Beatrice Mtetwa will be allowed as Chin’ono’s lead lawyer; then the in-camera bail hearing follows.

“Today [Thursday] police were camped at Beatrice Mtetwa’s office singing revolutionary songs from the liberation struggle… The police have a duty to protect law and order and not scare tactics.”

An accomplished human rights defender, Mtetwa is the only African besides Nelson Mandela to have received the Ludovic Trarieux International Human Rights Prize from France.

Press freedom violations in Zimbabwe have shot up since the beginning of a nationwide lockdown on 30 March. Dozens of journalists have been arrested on varying charges, from violating Covid-19 curfew regulations to inciting public violence.

“The arrests of journalists in Zimbabwe are a serious concern. Since the inception of lockdown, we’ve recorded 25 cases of violations that vary in terms of magnitude and impact, including arrests and release without charge after two days or so.  There is a serious constitutional crisis in the country and when journalists are being persecuted, it is the media which is on trial.

“We hope the courts will rise beyond narrow, individual and political hindrances to discharge justice on behalf of Zimbabweans and enjoy rights provided by their constitution. We have not seen such a long stretch where a journalist is prosecuted on a quite contested charge sheet. The hopes of this political prisoner lie on the shoulders of the judiciary’s pronouncement.”

According to Reporters Without Borders (RSF), since the start of the Covid-19 pandemic more than 100 press freedom violations linked to coverage of the crisis have been recorded in Africa. A quarter of these violations, including 10 arbitrary arrests, have taken place in Zimbabwe, which is the continent’s biggest offender. Zimbabwe is ranked 126th out of 180 countries and territories in RSF’s 2020 World Press Freedom Index.

The underlying crisis in Zimbabwe

Zimbabwe under the authoritarian rule of the late Robert Mugabe for 40 years since independence in 1980, saw the massacre of an estimated 20,000 civilians in Matabeleland during the Gukurahundi period in the 1980s. Political opponents were dealt with severely and many were brutalised, abducted or killed during the last 20 years.

Zimbabwe’s economy rapidly deteriorated after the land reform which began in 1999. Today the country has a 90% unemployment rate and the second-highest inflation rate in the world – 750% – after Venezuela.

President Emmerson Mnangagwa has distanced himself from the past misgivings by branding his tenure as the “new dispensation”, but many see a continuation of repression, dissent and endemic corruption at unprecedented levels.

Following the military-assisted transition of November 2017, Mnangagwa promised many reforms, but repressive laws that were used in the Mugabe dispensation still exist, although in a changed form.

More than a dozen citizens were killed at the hands of uniformed forces using live ammunition during the post-election violence arising from a disputed presidential election result in August 2018.

Activists have been abducted, brutalised, sexually assaulted or are in hiding.

It is not clear why the envoy did not manage to meet opposition political parties and local civic organisations even after Ramaphosa had indicated that the envoy was going to meet all relevant stakeholders. DM

Biden vs Trump: Pundits are calling it close, while voters fear possible gun violence at the polls

Family ‘dumped’ in Wellington can’t travel to work and school

Liezl Human for GroundUp
Save 3 mins