Gauteng government tries to defend the procurement corruption report as just that, a report 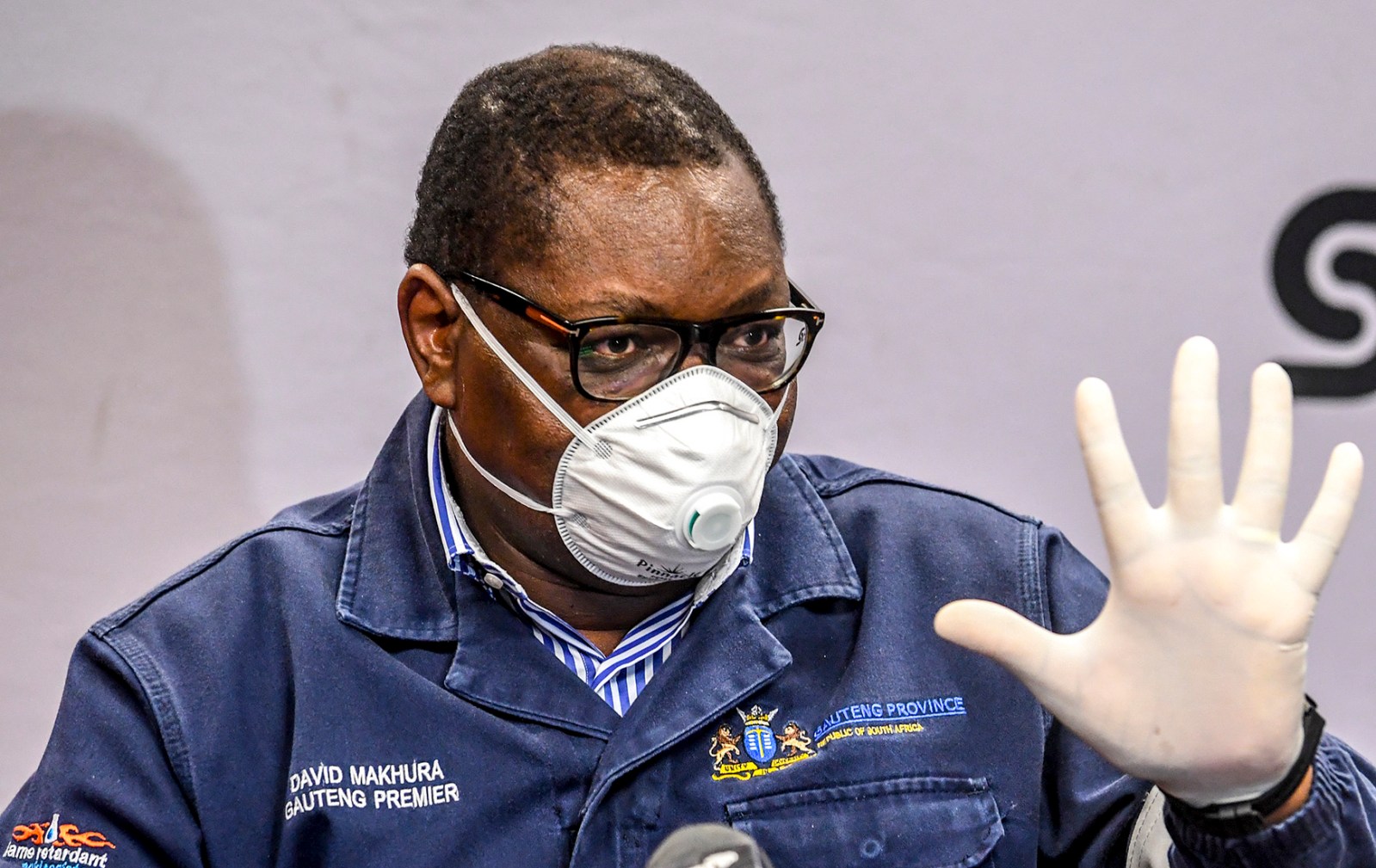 CARLETONVILLE, SOUTH AFRICA - MAY 27: Premier David Makhura visit Sibanye Gold Mine where during the media briefing held at Sibanye Stillwater academy the premier declared the West Rand a Covid-19 hot spot following a new infections in the mines. Representatives of other mines were at the briefing too, which preceded the media briefing on May 27, 2020 in Carletonville, South Africa. According to a media release, the Gauteng Executive Council, led by Premier David Makhura assessed compliance with health and safety protocols at mining facilities and shopping centres across the province. (Photo by Gallo Images/Sydney Seshibedi)

Gauteng authorities admit Covid-19 procurement corruption has been a blot on the province’s pandemic response, but it’s still best not to hold your breath for reform or actual accountability.

“A report, not an investigation,” is Gauteng Provincial authorities’ slant on their Covid-19 Disclosure Report that came in for a hammering after it was released last week.

Maverick Citizen’s article on 19 August 2020 showed how flimsy the report was on details and that omission of key information, especially of listed vendors and suppliers, revealed a damning story about corruption run rife, shoddy oversight and loopholes for exploitation of the R2.1-billion spent on Covid-19 expenditure during the period between April and July 2020.

Thabo Masebe, deputy director general for provincial communications, this week defended the province’s report “as fine” and merely a “compilation of facts from the various departments”.

Maverick Citizen’s check of many of the companies and vendors listed in the report pointed to entities that either do not exist as they have no web presence, street addresses or telephone numbers, or are possible front companies. Many were paid for services and goods that have nothing to do with the business services they were listed to provide. It raised concerns about their expertise, track record and capacity to deliver on the likes of personal protective equipment (PPE), medical and surgical equipment, sanitisers and detergents – lifesaving equipment in a time of Covid-19.

Other companies listed were only registered in the last few days of the reporting period that ran between April and July 2020, but they scored contracts worth millions.

Masebe conceded this week: “It shows how bad things may have gone and what happened when the government allowed for a deviation from normal supply chain processes because of disaster management. These people took advantage.”

He added: “The departments themselves allowed it [the approval of transactions] to happen and now we are waiting for the SIU [Special Investigating Unit] to know exactly why these things happened.”

He also insisted that a catering bill of around R1.4-million in the Office of the Premier over the four months of reporting could be justified as meetings, briefings and many regular operations in the office were still taking place. The reporting period, however, includes the weeks of hard lockdown when work from home regulations and bans on gatherings were in place. It’s an expense criticised for being extravagant and excessive especially in a time when  dire hunger had gripped the country.

Masebe admitted that Covid-19 corruption remains as a terrible blot on the province’s otherwise positive response of swift action to impose lockdown and for officials to work together across all levels of government.

He said the province will revert to pre-disaster management procurement supply chain processes. It means “contracts worth over R500,000 will require a tender process with competitive bidding and due diligence for suppliers with proven track records and there must be proper evaluation and adjudication”.

However, owners of two companies who are on the government’s Central Supplier Database confirmed to Maverick Citizen this week that even now, they are receiving invitations to bid for random services and goods.

“There is no categorisation in how they ask people to bid. It’s either because they already have someone they will give the bid to and just have to be seen to have sent out bid invitations or someone is just doing their job badly,” said one vendor who supplies IT services.

He also flagged a “declaration of interest” clause that still exists on tender applications. It’s a loophole, he said, that allows employees of the state and their family members to win tenders and fall back on simply declaring interest.

Another man, who offers engineering services, said he has ignored numerous invitations to bid during the lockdown months largely because he felt it was unethical to suddenly switch gears to supply medical supplies for Covid-19. Not having expert knowledge, he believed, would compromise people’s health and wellbeing.

Neither man wanted to be named as both were scared that speaking out will cost them tender opportunities with government in the future.

Jack Bloom, the DA’s spokesperson for health in the province, said the glimmer of hope is that the outrage over the Covid-19 corruption has led to steps such as the SIU freezing accounts and the possibility of companies being nailed on tax infringements.

“Civil action and SARS is the route to go. There just aren’t the resources for criminal prosecution and there is a dire lack of capacity and political will. Even SIU investigations and commissions can be spun out for years,” Bloom said.

Bloom said the Covid-19-related corruption comes off the back of long-existing failures in the government. “Corrupt companies and officials just piggybacked on what came before. We’re just seeing this now because with Covid-19, the corruption has been comprehensive, brazen, across the board and shameless.”

“The Public Finance Management Act makes provision for disciplinary steps to be taken against those who negligently or intentionally allowed these transactions to take place – fire them.

“There is no need for the Gauteng government to wait for the SIU investigation or for criminal action before they discipline or fire someone. The system will only work when unethical people and crooks are no longer in the system. And then people will maybe start to trust the government again,” she said.

Fick, who assessed the Disclosure Report, said it lacks transparency and accountability.

“Don’t just publish the names of the vendors, show all the paperwork; the unit prices of items and services procured so we can see that the province got the right people who meet the procurement requirements to supply services at the right prices,” she said.

Gauteng’s next Covid-19 disclosure report, compiled by provincial treasury, is expected out in the first week of September 2020. DM/MC