By Steve Kretzmann for GroundUp• 27 August 2020 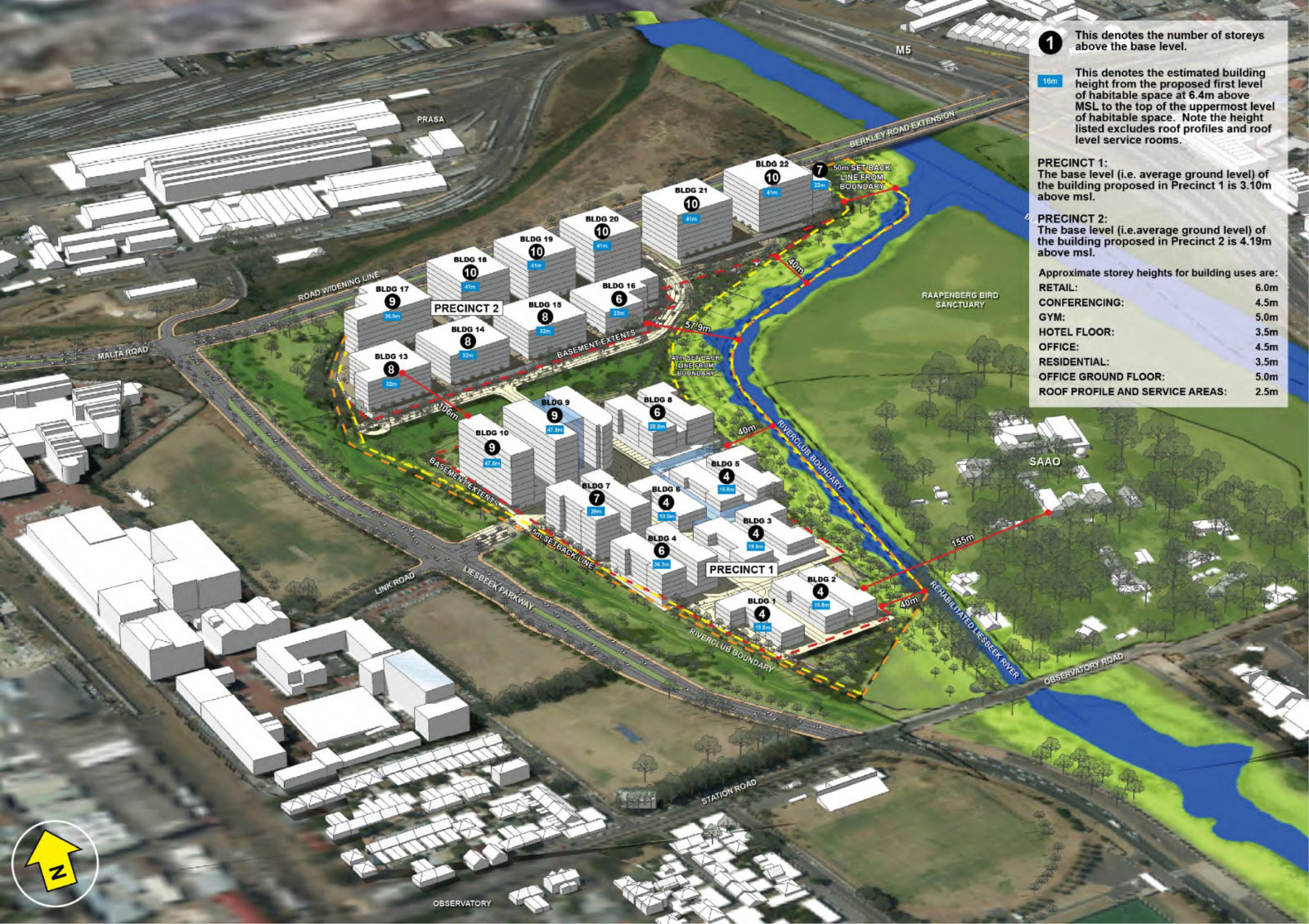 The City of Cape Town is appealing against provincial authorisation of a R4-billion River Club development. (Photo: Steve Kretmann)

Environmental authorisation has been given for the River Club development in Observatory, Cape Town despite outstanding heritage matters and civil society opposition.

The next step towards a massive R4-billion development on the contested River Club site in Observatory, Cape Town, has been authorised by the provincial government.

The Environmental Authorisation granted by the Western Cape Department of Environmental Affairs and Development Planning (DEADP) comes although the development is inconsistent with existing development frameworks and has prompted civil society opposition.

The River Club falls within the Two Rivers Urban Park (TRUP), which Heritage Western Cape has stated “could be regarded as one of the single most historically significant sites in the country”, as it was the site of the first conflict between European settlers and the country’s original inhabitants.

Nevertheless, the authorisation allows the property owners, Liesbeek Leisure Properties Trust, to move ahead with applications for rezoning the 14.8ha property from its current Open Space designation, and to apply for a departure from the current Local Spatial Development Framework which does not allow for mixed development in what is partly a floodplain at the confluence of the Liesbeek and Black Rivers.

(One of the City of Cape Town’s main reasons for not considering the existing Rondebosch Golf Club, which land it owns, for the development of affordable housing as advocated by Reclaim The City, is because much of it comprises a floodplain for the Black River.)

The go-ahead given by DEADP on 20 August 2020 comes after the lapse of a two-year provisional protection order invoked by Heritage Western Cape (HWC) to protect the site from the threat of development. This was sparked by the developer’s notice of intent to develop submitted in 2016. The provisional protection order invoked in April 2018 was appealed by Liesbeek Leisure Properties, who were backed by the City of Cape Town, and DEADP, as well as the provincial public works department. The appeal was dismissed in a scathing ruling by the Independent Tribunal operating under the auspices of the provincial Department of Culture, Sport, and Recreation.

The provisional protection ended on 21 April 2020, but the full mapping and identification of all the heritage resources in the Two Rivers Urban Park by Heritage Western Cape still needs to be signed off. This process has been delayed due to Covid-19 restrictions affecting HWC’s ability to consult with all parties. DEADP has given the environmental authorisation despite this process not yet being finalised.

Liesbeek Leisure Properties bought the River Club for R12-million, excluding VAT from Transnet in 2015. The company is headed by Jody Aufrichtig who led the development of the Biscuit Mill and Wex apartments in lower Woodstock. The River Club currently houses a nine-hole golf course, a pub and restaurant, and conference facilities.

The proposed development will involve the filling in of the existing floodplain and the construction of several buildings, up to 10 storeys high, in order to create an office, retail and residential complex. 20% of the complex is set aside for residential purposes, and 20% of that is to be set aside for affordable housing. What constitutes “affordable” has not been decided.

Currently, the development is contrary to the existing Two Rivers Urban Park Contextual Framework of 2003 which designates the area as open space, as well as the Table Bay District Spatial Development Plan of 2012. Also, the 2018 Metropolitan Spatial Development Framework for the metropole, which DEADP refers to in its motivation for granting environmental authorisation, designates the Two Rivers Urban Park as one of Cape Town’s “natural destination places” alongside Table Mountain and the Company’s Garden.

DEADP notes: “The Two Rivers LSDF identified the area as a significant area of underutilised state-owned and private land. The ecological role of the river corridors, and the cultural and built heritage of the area must be enhanced.”

However, the Two Rivers LSDF remains a draft. The proposed new LSDF was initiated to update and replace the 2003 contextual framework in the same year Liesbeek Leisure bought the land.

The consultant initially hired by the City to update the contextual framework to a local spatial development framework “came under significant pressure – from both the City and provincial authorities”, writes Crispian Olver in his book A House Divided, which examines the City of Cape Town administration based on research for his PhD. Based on Olver’s interviews, there was pressure for the consulting company “to amend their technical reports, which advised against the project as it was conceived, on the grounds that it was located on a floodplain, which also happened to be of great historical significance”.

“When they refused, their contracts were not renewed and the plan was put on hold,” wrote Olver.

A new consulting company was then appointed, which has developed the new draft LSDF, which allows for the River Club development.

The authorisation also comes despite the developer’s Heritage Impact Assessment, which has to be submitted in terms of the National Heritage Resources Act and the National Environmental Management Act, having being roundly rejected by the HWC in February 2020.

In their Final Comment of 13 February 2020, HWC stated that the heritage assessment submitted by Liesbeek Leisure Properties did not comply with the provisions of the National Heritage Resources Act; DEADP had to resolve all the heritage related issues before taking a decision.

It is uncontested that the confluence of the Liesbeek and Black Rivers was a meeting place for various Khoi groups, with the banks lush with grazing for their cattle, and was also the site of the first conflict over land as the Dutch settled and expanded their garrison for farming. It is also an area where the Khoi fought and defeated the Portuguese invaders led by Viceroy Francisco D’Almeida in 1510. This heritage does not exist in tangible buildings or artifacts, but within the intangible heritage of land and topography.

Heritage Western Cape has stated that the Two Rivers Urban Park as a whole should at least be provided with provincial heritage status, while its national body, the SA Heritage Resources Association, has suggested it be graded as a site of national importance. However, HWC CEO Mxolisi Dlamuka has said the heritage body requires a submission for such a grading. During 2020, the Observatory Civic Association submitted an application for provincial heritage grading, which is being processed.

There has been consistent civil society opposition to the development since 2017, with preparations and submissions by the Observatory Civic Association, Two Rivers Urban Park Association, the Goringhaicona Khoi Khoin Indigenous Traditional Council, as well as other First Nations traditional councils. Some of these have been supported by residents’ civic associations of Mowbray, Rondebosch and Pinelands.

The Observatory Civic Association intends to appeal DEADP’s Environmental Authorisation. The association says the authorisation was “based on a Heritage Impact Assessment that was rejected by Heritage Western Cape” and “failed to recognise the heritage resource which is the site”.

The Goringhaicona Khoi Khoin Indigenous Traditional Council stated: “It is unfortunate to see ignored in the decision the thousands of people who objected, including the discontent expressed by reputable institutions in architecture, heritage, environmental agencies, and from the Khoi and San. This DEADP decision is therefore … morally reprehensible [and] professionally indefensible.”

Both civic bodies vowed to continue to defend heritage and environment from ill-considered development.

“We stand together because we want a City that works for everyone, not just those with the privilege of power, money and influence,” stated the Observatory civic association.

Aufrichtig, who is Liesbeek Leisure Properties’ trustee and spokesperson, said the development “will be a significant boost to the economy and people of Cape Town in the aftermath of the national Covid-19 lockdown”.

“Further employment will be created by the tenants that will occupy the offices, residential and retail spaces that will form part of the development,” stated Aufrichtig.

The project, he said, “will also serve as a first-of-its-kind landmark in the City for the First Nations people to reclaim, memorialise and share their heritage with the greater public”. This will be in the form of a cultural and media centre operated “by the First Nations people”, the inclusion of First Nation symbols within the architecture, an indigenous garden, and a heritage eco-trail and amphitheatre.

These additions to the plan were included toward the end of the planning process, after Liesbeek Leisure consulted with a grouping identifying itself as the First Nations Collective, which was formed in December last year. The Collective, with Zenzile Khoisan as its spokesperson, was initially opposed to the development. The legitimacy of the First Nations Collective has not been recognised by a number of Khoi traditional houses who remain opposed to the development on what they consider to be sacred ancestral land.

Khoisan, via a letter in the Cape Argus on 25 August 2020, stated the inclusion of the media centre, eco-trail, architectural symbols, and indigenous garden within the development makes it the “first development of its kind where the memorialisation of our heritage has been properly secured with a plan that will secure our people for the next seven generations”.

In response to questions, DEADP said it was responsible for administering applications and did not “support or promote development proposals”. DEADP said the public participation requirements had been met. DM