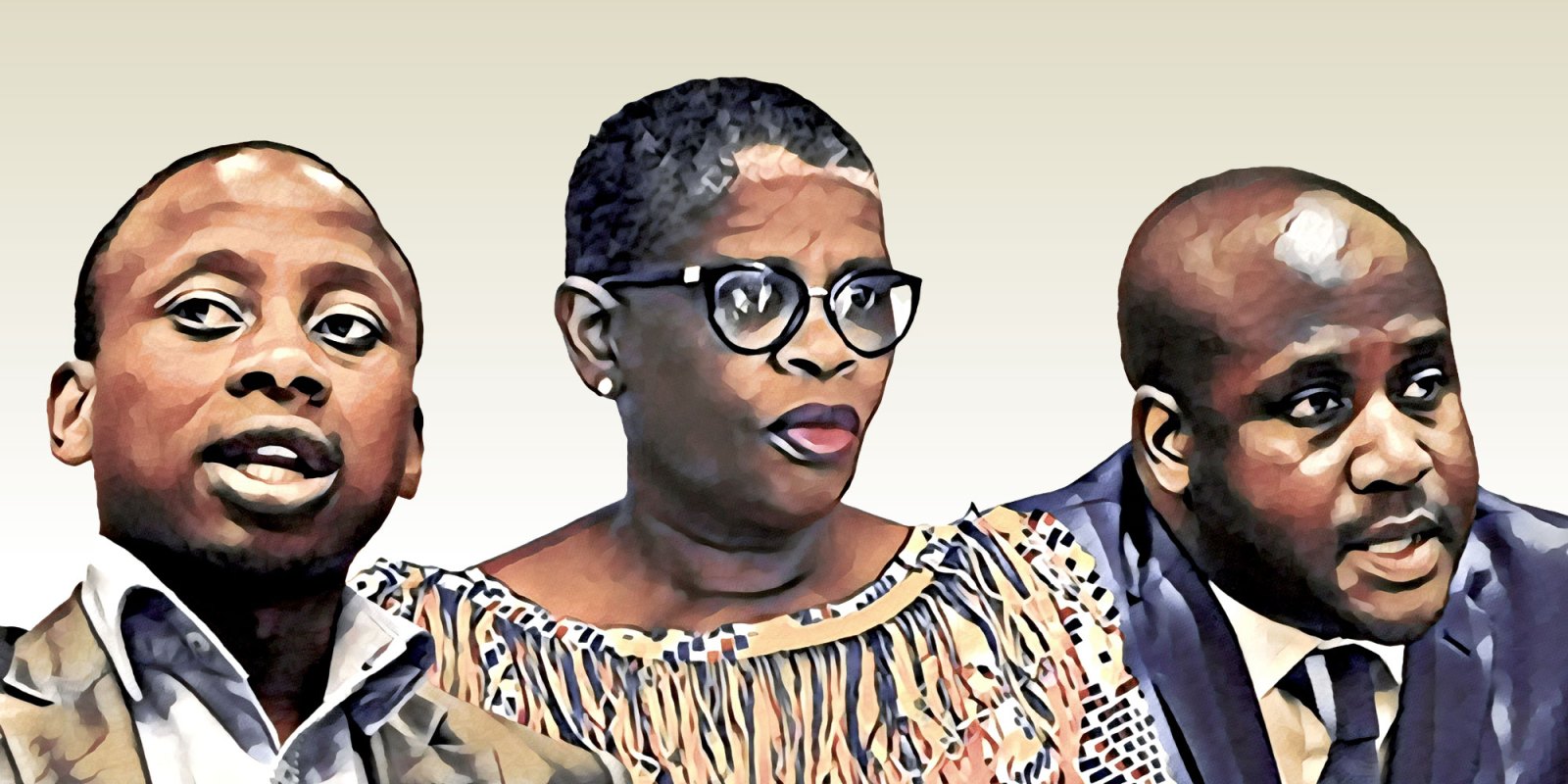 Zandile Gumede, Bongani Bongo and Andile Lungisa look set to be on the carpet as an anti-corruption ANC executive meeting gets under way on Friday 28 August.

At the special meeting of the ANC’s National Executive Committee (NEC) which begins on Friday and ends on Sunday, three elected representatives of the ANC are likely to face calls for temporary suspension as they face criminal charges or have been convicted.

This is likely to be done through Section 25.70 of the party’s constitution (see explainer). 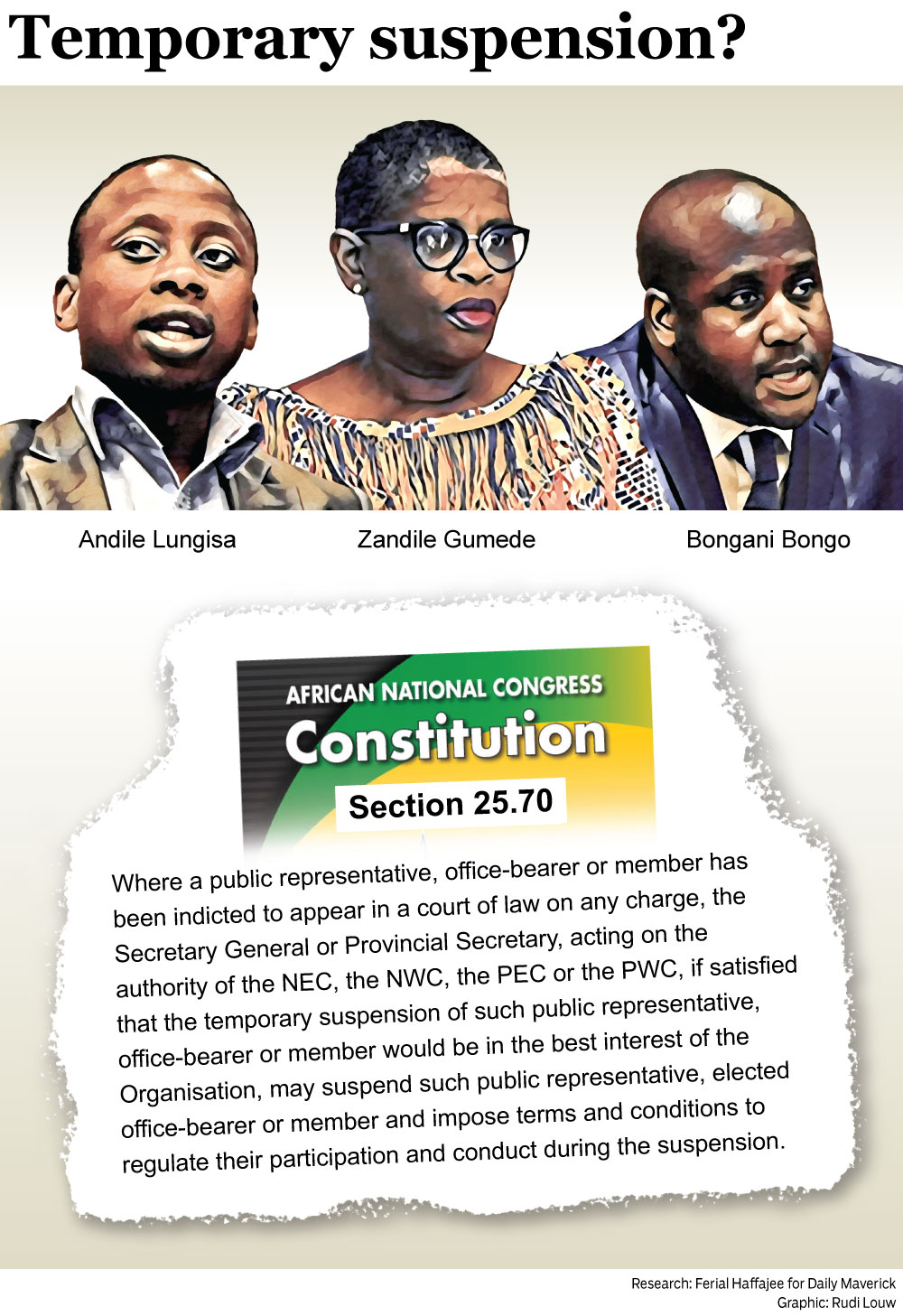 Gumede was sworn in as a provincial member of Parliament in KwaZulu-Natal, boosting her salary from that of a councillor to more than R1-million as a provincial legislature member. She has been charged with fraud and collusion to the tune of R230-million, along with 15 business people and council officials, for dodgy emergency procurement of cleaning and dumping services in Durban when she was mayor.

The public furore that greeted her elevation is the straw that broke the camel’s back for President Cyril Ramaphosa. In his seven-page letter to ANC members on Monday, he said, “The ANC may not stand alone in the dock [for corruption], but it does stand as Accused No. 1”. It came with an order to party officials to draw up lists of tainted cadres.

“Every cadre accused of, or reported to be involved in corrupt practices must account to the Integrity Commission immediately or face disciplinary processes,” said Ramaphosa’s letter. All ANC offices around the country and its Luthuli House headquarters scrambled to put the lists together ahead of the party’s special NEC meeting. The Integrity Commission has also been scrambling and has requested the party’s secretary-general, Ace Magashule, to appear before it following a television interview in which he said he would not stand down for the allegations he faces.

Gumede’s swearing-in, despite the fact that she is due in court in September, shows that she is a powerful figure in the KZN ANC, who acts with impunity. The charge sheet against her is damning but she has repeatedly fly-swatted away the allegations against her, crying conspiracy.

The charge sheet reads that, while mayor, she allegedly “[influenced] officials from the Cleansing and Solid Waste Unit and Supply Chain Management, which resulted in engagement in an unlawful procurement process for refuse collection, street-cleaning and illegal dumping for various townships” to the value of R230-million. A common purpose case is being brought against Gumede as part of an alleged conspiracy to defraud her own municipality. The former mayor has told the ANC head office that she is innocent of the charges and she has pointed to the repeated postponements of her case by the National Prosecuting Authority to suggest it has no case.

Gumede was moved to the provincial legislature because she allegedly engaged in factional politics in the metropolitan council, preventing service improvements. The eThekwini metro is important to the ANC as it is one of the only cities where it governs without coalition partners. Sources in the ANC in KwaZulu-Natal say Gumede is unlikely to step down voluntarily. The party is set to run three important electoral regional conferences this year and Gumede is a powerful mobiliser who can upset a delicate balance in favour of Ramaphosa’s reformist wing of the party.

KwaZulu-Natal is the largest and most powerful province in the ANC. This week, leaders of the party in KwaZulu-Natal tried to get Gumede to step down ahead of a motion to suspend her.

Bongani Bongo, the ANC MP and former short-lived state security minister also faces carpeting and is likely to be placed on leave at the NEC meeting.

He faces corruption charges for allegedly trying to bribe Parliament’s general counsel, advocate Ntuthuzelo Vanara, who was leading an inquiry into State Capture at the national legislature.

But Bongo has told the ANC headquarters that Vanara has been unable to provide his key evidence – the tape-recording of the alleged bribe offer made to him by Bongo. The Mpumalanga politician is likely to put up a fight against any steps as he has a powerful Mpumalanga constituency and is a popular former provincial football star. In addition, he is an advocate, so will defend himself to the hilt.

This week, Nelson Mandela Bay councillor Andile Lungisa fired the first shot across Ramaphosa’s anti-corruption confab when he leaked his letter. In it, he revealed that Ramaphosa will face a significant push-back in his campaign to clean up the ANC.

Lungisa faces suspension or being put on leave because he has a criminal record for assault of a fellow councillor in the council. He was also arrested in 2013 for attempted fraud when he contrived an  R.Kelly concert that never happened in order to get council of arts and culture funding.

Carl Niehaus, the spokesperson for the MK Military Veterans League and who works in Magashule’s office, told Daily Maverick:

“We believe charity begins at home. There are serious allegations of vote-buying at the 54th national conference [where Ramaphosa was elected by a slim margin of 179 votes]. We are saying there are serious allegations of vote-buying. [The CR17 campaign] account details should be opened. The Integrity Commission should demand access to this. The MKMVA believes that corruption should be dealt with in an even-handed fashion. [If you don’t deal with it this way], the NEC will be paralysed by factionalism – with each being moved into a stalemate.”

An ANC official with no affiliation or affinity to the MKMVA said there were many members of the NEC who were uncomfortable with the lack of transparency on how Ramaphosa’s bid for the ANC presidency had been funded to the tune of half a billion rand.

“Raising so much money for an election means that only the wealthy will be able to lead the ANC. The president will be asked about the R500-million,” said the official.

Integrity Commission in line of fire

Questions have been raised by Magashule and others about why the Integrity Commission (IC) only called him to account for the television interview in August when it aired early in July.

A senior party official also said that the commission had erred in its treatment of Danny Msiza and Florence Radzilani, the two Limpopo officials implicated in the looting of VBS Bank. (See Pauli van Wyk’s account of their roles here).

“The IC did not ask them to put their side of the argument. The state [NPA] arrested other people but not these two,” said the official. There is a powerful lobby in Vhembe (where the largest number of VBS depositors live) and in the party’s Veterans League to resuspend the two at this weekend’s meeting, but this is unlikely to happen. Msiza secured a successful judgment based on the audi alteram partem rule – that the Motau report into the VBS looting had not heard his side of the story.

Limpopo Premier Stan Mathabatha is said to be a firm supporter of Msiza, who is a charismatic grassroots mobiliser.

Another big-ticket item on the special NEC agenda this weekend is a report on food parcel corruption. (Two ANC members have been charged.)

What are the Integrity Commission’s true powers?

Another big theme is likely to be the powers of the Integrity Commission. Its terms of reference have never been finalised or publicised, so the party tends to ignore its recommendations. For example, the commissioned red-flagged 22 people who made it onto the party’s lists for public representatives, including Deputy President David Mabuza, whom City Press said had not been cleared by the party’s standards committee. Deputy Finance Minister David Masondo has also refused to step down despite an Integrity Commission report recommending he do so for abusing his power to get the Hawks to go after a young woman with whom he had an affair.

One of the reasons that only lip service is paid to the IC is that the ANC has not clarified its powers as outlined in its resolutions on the commission at the Nasrec conference where Ramaphosa was elected: “Consideration should be given to the two options: whether the decisions of the Integrity Commission should be binding or whether they should make recommendations to the NEC, thus advisory.”

This decision has not been finalised. Many reports of the integrity body have not even made their way onto the party’s executive meeting agendas, suggesting it is becoming a paper tiger.

The integrity commissioners are:

All of them are party veterans with long and storied histories in the ANC but until their powers and functions are clarified, their reports and summonses are largely ignored. DM