‘We decided if we die, we will die in the line of duty’ – PE hospital doctors keep maternity unit going against all odds 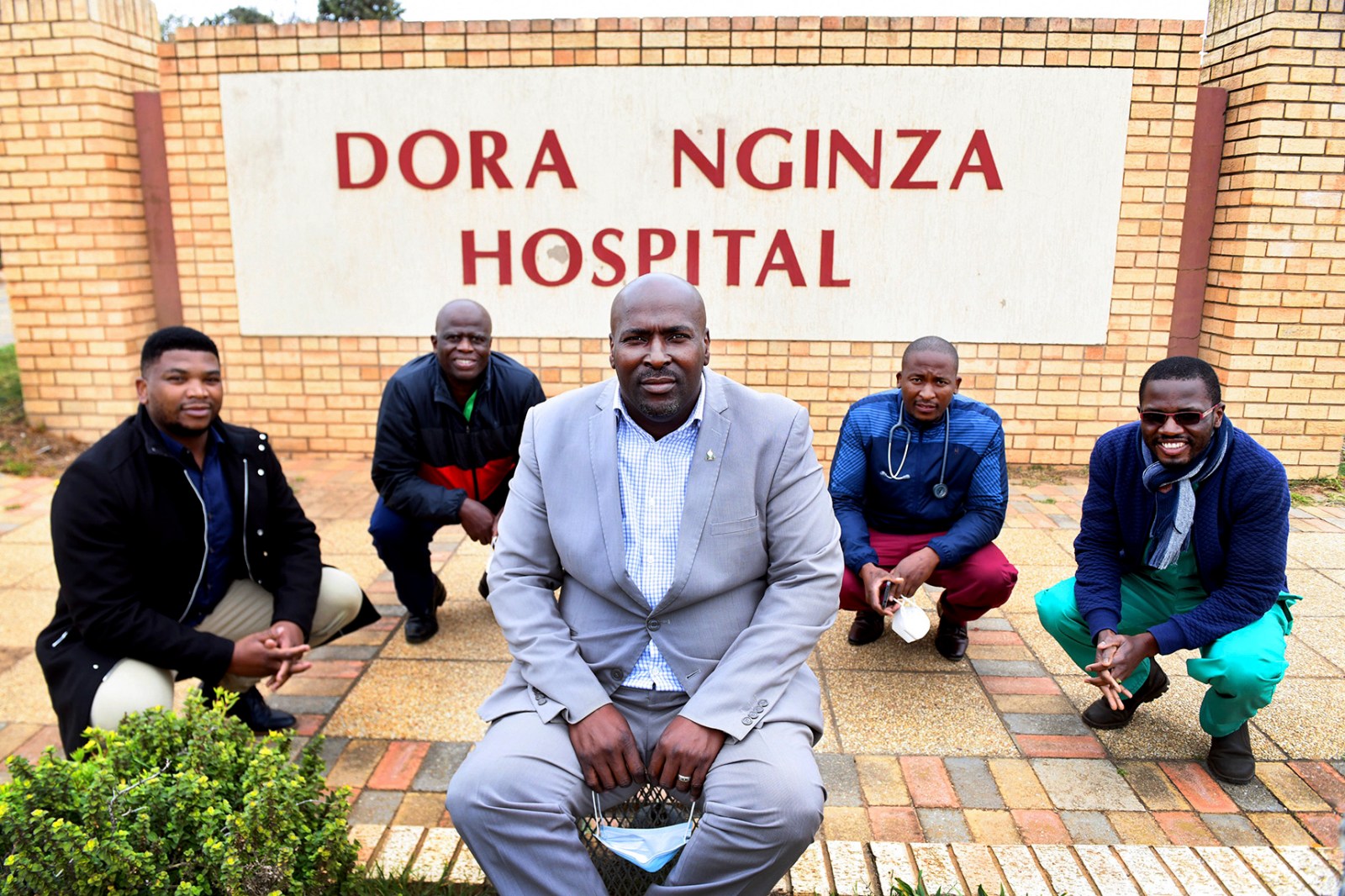 In June 2020, as maternity services at Dora Nginza Hospital came close to collapsing as staff shortages spiked and the hospital became overwhelmed, a small team of doctors kept things going for several days and nights.

As nurses and general assistants at Dora Nginza Hospital in Port Elizabeth left or fell ill, the doctors manned surgical theatres, cleaned, consoled and delivered babies. “We decided that if we had to die, we would die in the line of duty,” the head of the department of Gynaecology and Obstetrics at Dora Nginza Hospital, Dr Mfundo Mabenge said. This week, three of the doctors who kept the service going passed their exams to qualify as specialists.

Three of Mabenge’s team were still studying for their final exams and wrote their papers in the middle of the crisis, and another had recently qualified in January 2020. “All of them passed,” he said. “We have now produced 10 specialists in this department. I did give them a day off to study,” he laughed.

His newly qualified team of specialists were working at his side throughout the crisis when the obstetrics and gynaecological wards became overwhelmed as other clinics were closed due to Covid-19, and staff were absent due to union rules about the deep cleaning of areas. An exhausted team headed by Mabenge kept the service going – all while many were also studying for their exams.

The situation was subsequently addressed after it was highlighted in a report drawn up by experts sent to the Eastern Cape to strengthen the public health system, on request of Premier Oscar Mabuyane. The Eastern Cape Department of Health has, since then, introduced a number of relief measures to assist the unit.

Dr Simphiwe Made said he started practising as a GP in Port Elizabeth, but after his practice was robbed twice at gunpoint, he decided to give up private practice and join public service.

“At first, I refused to apply for a registrar post to train as a specialist,” he laughed. “I liked obstetrics and gynaecology as an undergrad, but eventually Prof Mabenge convinced me. I really enjoy the work,” he said. “I will only leave when the computer kicks me out,” he laughed. “Our intention is to have healthy moms and babies, and that is also the measure to determine the success of any health system.”

Dr Mfesane Qobo qualified in 2008 and was working in Cofimvaba when he was first approached to come train as a specialist in Mabenge’s department. “I came up with a story in 2011 why I couldn’t take the job, but eventually I joined the department in August 2014.”

“It was extremely difficult. Two months later, I wanted to leave. I said to Prof Mabenge. I want to go home. He was very tough on me, but he convinced me to stay.

“When we passed the exams last Friday, the mood in the hospital was so nice. We have come through tough times,” he said. “We felt a lot of relief. It is nice to work in this department. There is law and order here. People support each other.”

Dr Lunga Magaga, who qualified with Qobo in 2008, said he first worked a short stint in private practice, and also spent some time in the obstetrics and gynaecology department in Pietermaritzburg before joining Mabenge’s team.

“I liked that the department was so well run,” he said.

“I was very relieved when the results arrived. When I was studying for the first part of the exam, my car was stolen with all my notes and papers. It was a Sunday. I phoned Prof Mabenge to come help me. The police found the car, but they never found my papers,” he said.

Dr Moses Mandaha qualified with his MBChB from the University of Cape Town and did his internship in Port Elizabeth. After three years in Limpopo, he returned to Dora Nginza Hospital in 2016.

“I used to hate obstetrics. Every obstetrician I met before I came here was rude and mean,” he said. “But they were not mean here.”

Mandaha qualified as a specialist earlier in 2020. “I felt very relieved. It was a tough journey. I have young children. Prof Mabenge was very strict and pushed me a lot. He said get up at 1am to study. I realised that was the only way – to wake up while everybody else was sleeping.”

Mabenge said it was his sincere hope that all of them would be appointed as specialists in the hospital.

Made said when Covid-19 hit, they were all concerned. “But we made excuses. We were all working and taking the necessary precautions.”

“We never had a debriefing,” Mabenge said. “But we tried every time we met to spend five or 10 minutes to talk about it. We were just brainstorming and we used the time to express our fears. The biggest thing for me was that every one of them and our other colleagues were willing to work. We decided that if we die, we will die in the line of duty,” he said.

At the time, apart from delivering babies and doing C-sections, the doctors were also caring for 25 pregnant women who had Covid-19 and another 19 who were waiting for test results.

Qobo said it was inspiring to him that Mabenge was leading by example and was working alongside them.

“The biggest challenge was when you had to go home. I have small children and they didn’t understand that they had to wait until daddy has taken a shower before they can come say hi,” he said.

“I was also scared when the news of Covid-19 hit,” Magaga said. “But we worked as a unit. We supported each other. We also had to make time to study. Our exams were postponed a few times and there was a lot of uncertainty for us.”

Mandaha said there were many days when they were exhausted. “We were very short-staffed. We phoned Prof Mabenge once to ask if he could come and help because we had nobody else. He arrived and said: ‘It is close to midnight. You have a young wife, why don’t you go home.’”

“I would also love for us to express our sincere gratitude to the Port Elizabeth community,” Mabenge said. “They really rallied around our doctors. My fridge was always full of energy drinks. There were sandwiches and food for the doctors every day. They brought us sanitary pads, mattresses, food and fruit for the patients. They brought washing machines. We were never short of anything,” he said.

Mabenge also paid tribute to the late dean of the faculty of health sciences at Nelson Mandela University, Prof Lungile Pepeta. Pepeta died on 7 August 2020 of Covid-19-related complications. “He really was the person who inspired me to keep on training more specialists.”

Mabenge said there were now 16 specialists working in his unit where between 600 and 800 women give birth each month. “We are sending two more doctors to Pretoria to specialise in uro-gynaecology and in foetal medicine,” he said.

Mabenge himself is a super-specialist in gynaecological oncology and is also busy training more super-specialists that will take their examination in January 2021. DM/MC