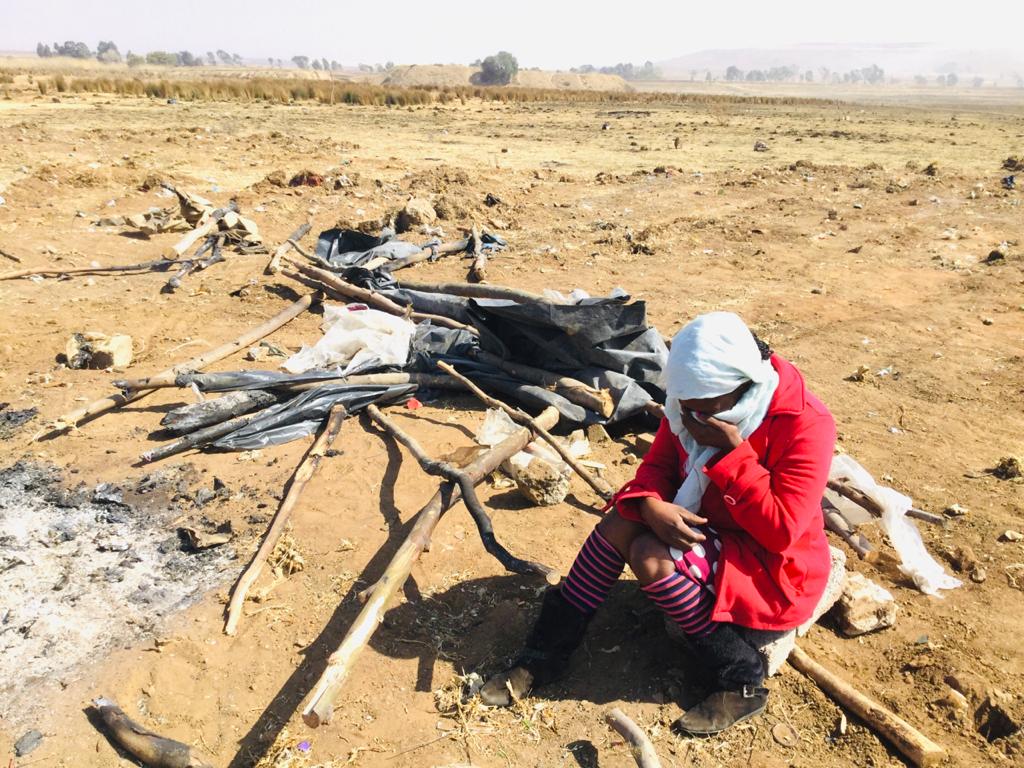 Thandeka Ngobeni sits next to what remains of her shack near the Heidelberg highway in Tsakane. It was demolished for a third time by metro police on Monday morning. (Photo: Kimberly Mutandiro)

Attempts by dozens of families to occupy land near the Heidelberg highway in Tsakane were stopped on Monday, 17 August. At least 13 were arrested for protesting when officials started the demolitions on Sunday.

The sound of Thandeka Ngobeni crying could be heard in the background despite the loud clunking and banging noises as shacks around her were being demolished on Monday morning, 17 August.

She is a single mother of four children. She explained that the shack destroyed near the Heidelberg highway in Tsakane’s extension 11 on Monday was her family’s third home to be demolished by metro police in less than a month.

“l used my children’s grant money to buy material to build a shack. What are my children going to eat for the rest of the month?” asked Ngobeni.

Ngobeni and more than 50 other people from different areas in Tsakane have been erecting shacks on the land since Sunday, 16 August. Their efforts to occupy the land have continuously been halted by metro officers monitoring the area. It is understood that a helicopter circling the area is monitoring the group.

After demolitions on Monday, occupiers were again warned to stay off the land and some people were arrested when metro police fired rubber bullets, and cleared over 2,000 shacks from the area last week, she said.

“I don’t know what is worse – hunger or not having a place to stay,” Ngobeni said tearfully. She currently lives with her children in a one-room rental apartment in extension eight. Paying rent and buying food has been difficult as she is now unemployed.

On Monday, she gathered the remaining boards and poles of her demolished shack, and tried to put them back in place to start rebuilding her home again.

“If I were not desperate for a home of my own, I would be sleeping now like other peaceful people. Government should meet us halfway and give us this land.”

Lindiwe Mazibuko, whose shack was destroyed on Sunday, said: “Land is being sold here in extension 11 and people are building houses before our very own eyes while we suffer. Some of us try to occupy land because we do not have money to buy. After erecting shacks, we were expecting our councillors to come and address us first, and understand our suffering. Instead they sent metro police to torment us.”

The recent occupation, residents say, follows a dispute over land they claim was sold to “outsiders” from Vosloorus and Soweto. We have not been able to verify this claim.

But Hlengani Chauke, ANC Secretary and PR Councillor in the area, said the land in dispute is private property owned by the Tsakane School of Excellence. It was auctioned off, he said.

Chauke said the occupiers were coerced by “crooks and hooligans” to occupy the land. “It is unfortunate that people like shortcuts and fall prey to these land occupation scams. These people have maps of all targeted pieces of land.”

He said metro police were operating under strict orders to demolish all newly erected shacks daily. “We must move fast and destroy shacks before land occupiers start giving the 48-hour excuse. They always use the excuse that once they have occupied the land for more than 48 hours, they belong there according to the law. Police will not tolerate them,” said Chauke.

Tsakane SAPS in a statement on 16 August 2020 warned people against the occupation. It said 13 people were arrested for public violence for “illegally occupying and erecting shacks”. Police said that when they asked people to demolish their own shacks, the crowd started protesting and fighting with them. “The arrested suspects alleged that they were promised that land,” said the SAPS statement. DM