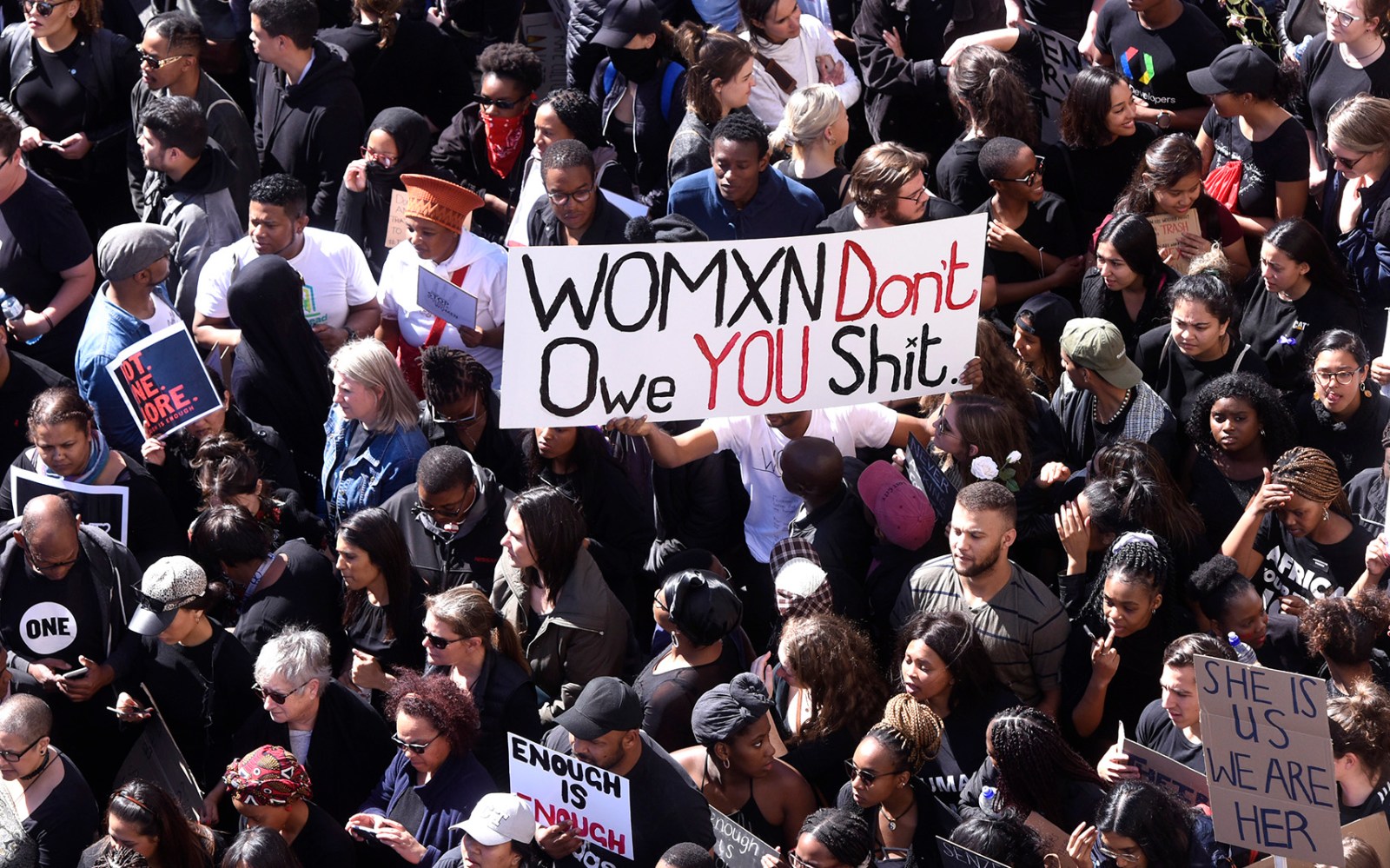 CAPE TOWN, SOUTH AFRICA - SEPTEMBER 05: People gather during the gender-based violence demonstration outside Parliament, following the rape and murder of UCT student Uyinene Mrwetyana on September 05, 2019 in Cape Town, South Africa. South African President Cyril Ramaphosa skipped the World Economic Forum to address thousands of Capetonians mostly all dressed in black, where he said laws were to be changed with regards to violence and rape against women. (Photo by Gallo Images/Brenton Geach)

This week, events organised by #warrior womxn continue to remind us why we celebrate Womxn’s month, men talk about educating men on Gender Based Violence, and a virtual book launch sheds light on how Port Elizabeth was once a hotbed for political activism.

Womxn across South Africa continue to be celebrated for their achievements and individuality amid Womxn’s Month.

Over the weekend, I was asked by a male friend: “Why is there not a national men’s day or month”. My answer was simple: because every month is men’s month.

However, his question got me curious, so naturally I checked Google and lo and behold, there is indeed an international men’s day, which is held annually on 19 November.

According to South Africa’s official government website, and I quote, the objectives of international men’s day are:

“To include a focus on men’s and boy’s health, promoting gender equality, and highlighting positive aspects of male experience. It is an occasion for men to highlight discrimination against them and to celebrate their achievements and contributions.” (I will leave you to formulate your own opinions about this statement.)

If I may, however, say that the feminist movement would not exist if womxn did not need to continue advocating for their rights in the face of patriarchy and a pandemic of male violence.

Womxn in South Africa have fought for centuries – and continue to fight – against the injustices of society and gender-based violence and for equality. Celebrate your femininity my sisters and let us continue to stand together! Abafazi Wathint’ imbokodo.

This week, an undeniably important conversation takes place; where men educate and promote the need to change the behavioural norms and beliefs of men and boys.

Jesse Yende from The South Africanist will also share his vision for the 67 Shades of Hope campaign, and how it can help you to start the conversation.

On Thursday, 20 August, TEDx Cape Town invites you to a thought-provoking conversation on gender inequality where panellists will explore and unpack actionable responses to achieve a just and safe society for all womxn.

The conversation will be led by Mosidi Modise, a member of the World Economic Forum Young Global Shapers Community and a renowned activist for womxn’s rights.

W-Suite, an initiative dedicated to female development, empowerments, advocacy, and action, is hosting a collaborative online event in the form of a virtual summit on Thursday.

The 2020 W-Suite virtual summit will bring together womxn from across the spectrum that will engage in conversation around the theme of redesigning our story through unity.

The event will kick off at 9am and will be available live on Facebook.

On Monday, 17 August, the United Nations invites you to join experts for a media roundtable on stigma, discrimination, and misinformation on Covid-19. The webinar will be split into two sessions:

Session 1, titled: the role of the media in countering stigma and discrimination, will take place from 10am to 11am and will feature discussions by Leonard Zulu (United Nations High Commissioner for Refugees), Gushwell Brooks (South African Human Rights Commission), and Brenda Leonard (National Community Radio Forum, Western Cape).

At 10am, the Africa Institute SA is hosting an online seminar about the presence of ISIL-affiliated violent extremists in the Northern provinces of Mozambique and the risks they pose to the South African Development Community.

The event, titled: Violent extremism in Mozambique – implications for the SADC region, will be held in both English and Portuguese. Register here.

At 2pm, the Tshwane University of Technology will hold the third of its five-part Womxn’s Conversations on the Couch series to celebrate Womxn’s Month.  This week, join Ntambi Ravele, founder of the South African Womxn and Sport Foundation (SAWASF) as she discusses womxn in leadership. The webinar will be broadcast live on Facebook.

Covid-19 has enabled many schools and parents to fast-track the use of technology in education, but not without its challenges.

Tuesday, 18 August, sees the launch of Schoolscape’s IT 2020 interactive online summit aimed at helping teachers who grapple with education technology to make the most out of remote learning.

Each day will feature a different teacher broadcasting straight from their classroom – revealing how they solve different tech issues, sharing the products they use and how these products complement each other. The interactive online summit will give you the opportunity to learn from other schools through chat forums, virtual round table conversations, and one-on-one meetings. Register here.

Also, on Tuesday, Iranti and Gender DynamiX will host their next amplifying trans and gender diverse voices webinar! Jabu Pereira will be in conversation with Liberty Matthyse and B Caminga. This week’s theme is an inclusive feminist approach to trans exclusion. Email [email protected] to RSVP.

At 2pm, join SAfAIDS at the 16th Civil Society Forum (alongside the 40th SADC Heads of State Summit) to explore learning from Covid-19 to ensure resilient health service delivery during crisis in Africa. Email [email protected]  and [email protected]  to receive a Zoom invitation. 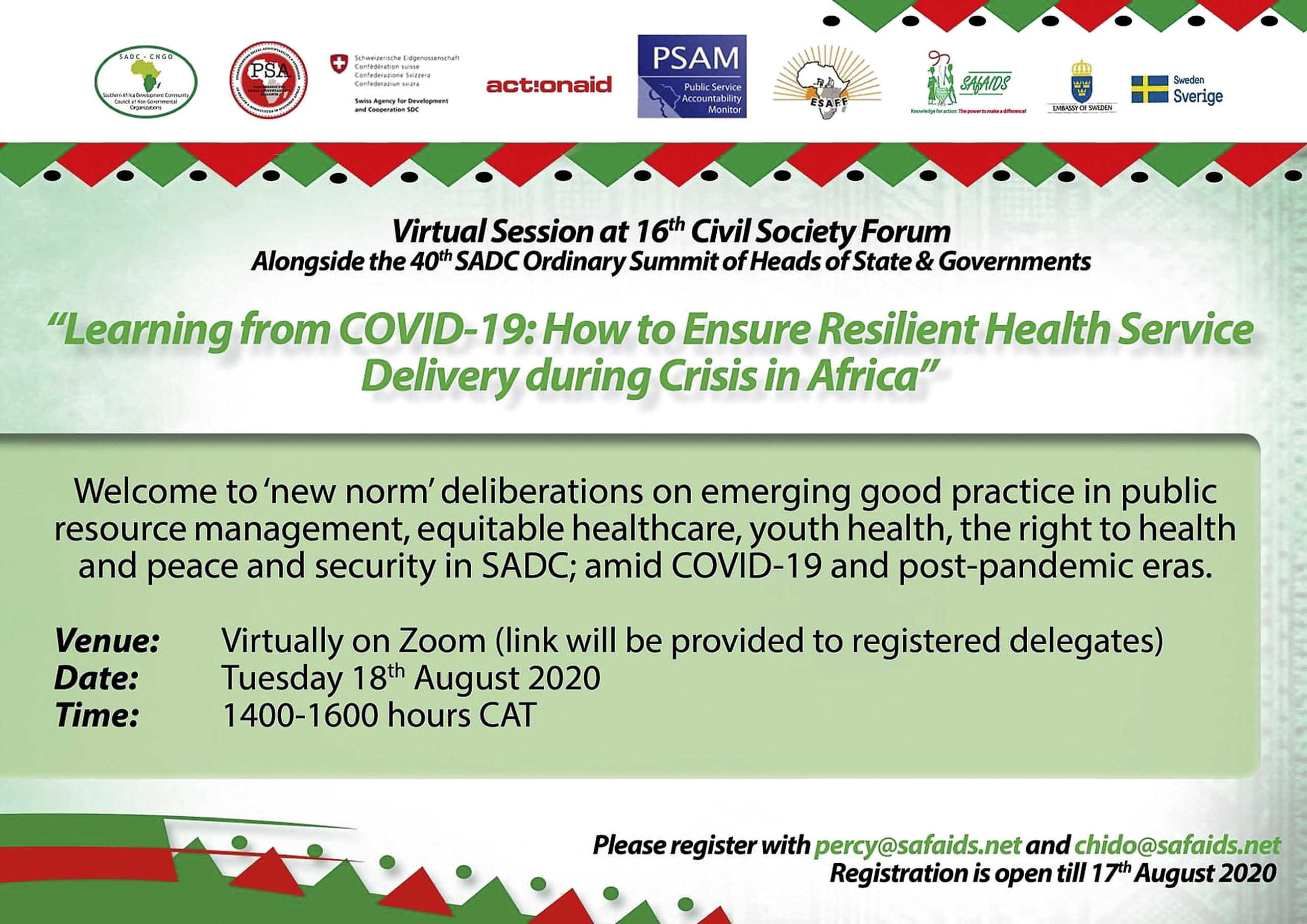 On Wednesday, 19 August, the Community Chest and the Southern Africa Food Lab are hosting the next webinar in the Justice, Human Rights and Development series, which will focus on the Crucial intersection of human and planetary health. 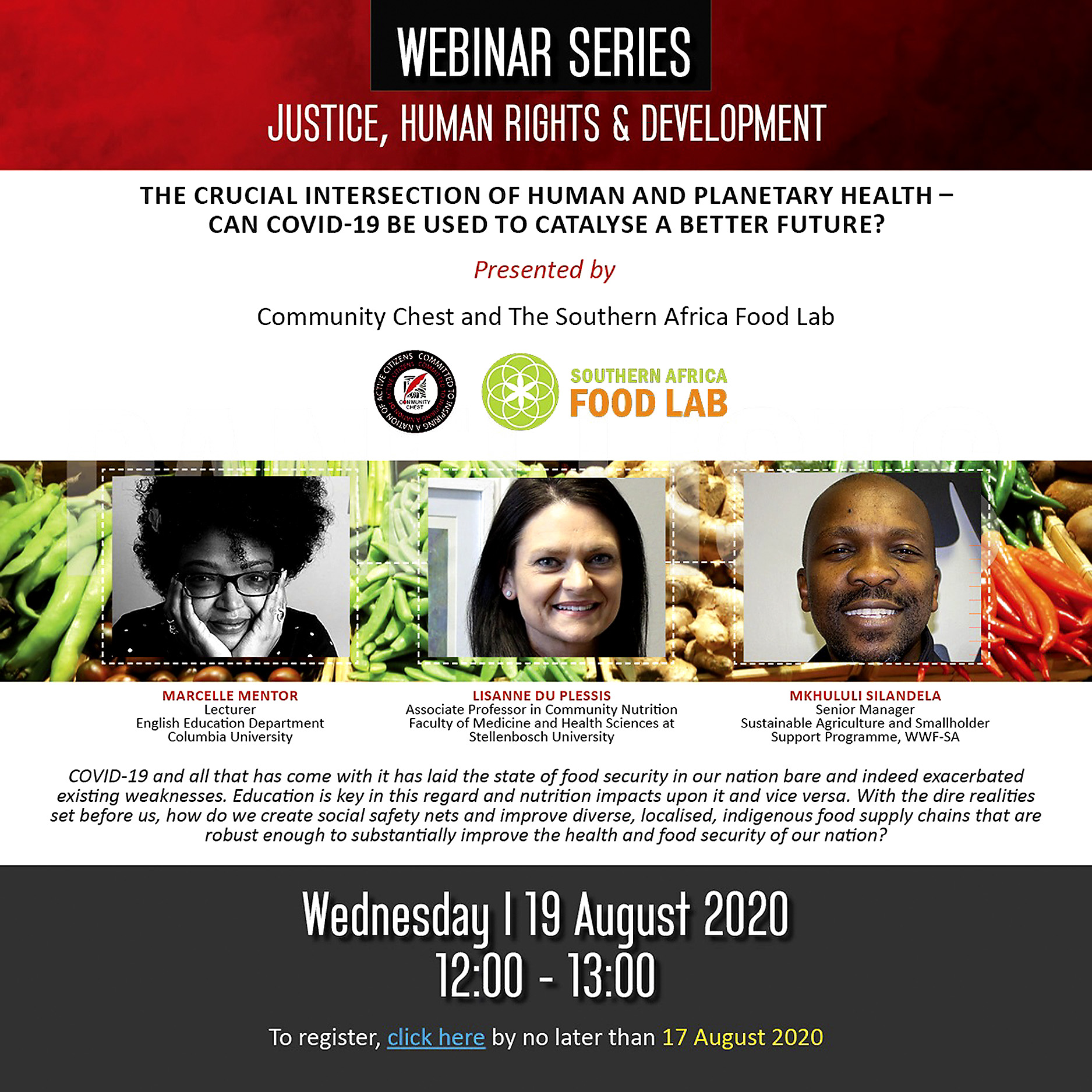 At 1pm, the Human Sciences Research Council (HSRC) invites you to the public launch of the new findings of the online multilingual Covid-19 Democracy Survey conducted by researchers from the University of Johannesburg’s Centre for Social Change and the HSRC’s developmental, capable, and ethical state division (DCES).

The webinar, titled What’s trust got to do with it?, will feature a discussion by Professor Narnia Bohler-Muller and Dr Ben Roberts.  Email [email protected]  if you are interested in attending.

A first for South Africa, the highly anticipated feature documentary Influence will premiere at Encounters Documentary Film Festival on Thursday, 20 August. In an exclusive post-screening webinar, Influence directors Richard Poplak and Diana Neille will be in conversation with Red Notice author Bill Browder as they dig into the ethical and moral issues exposed in the documentary. Register here.

Also on Thursday, the Call to Action Collective will be hosting their seventh virtual workshop in a twelve-week series on the National Strategic Plan on Gender-Based Violence and Femicide (NSP-GBVF). The workshops are held every Thursday until 23 September.

This week, UCT professor and former United Nations Special Rapporteur on violence against womxn, Rashida Manjoo, will discuss the establishment of the National Council on Gender-Based Violence. 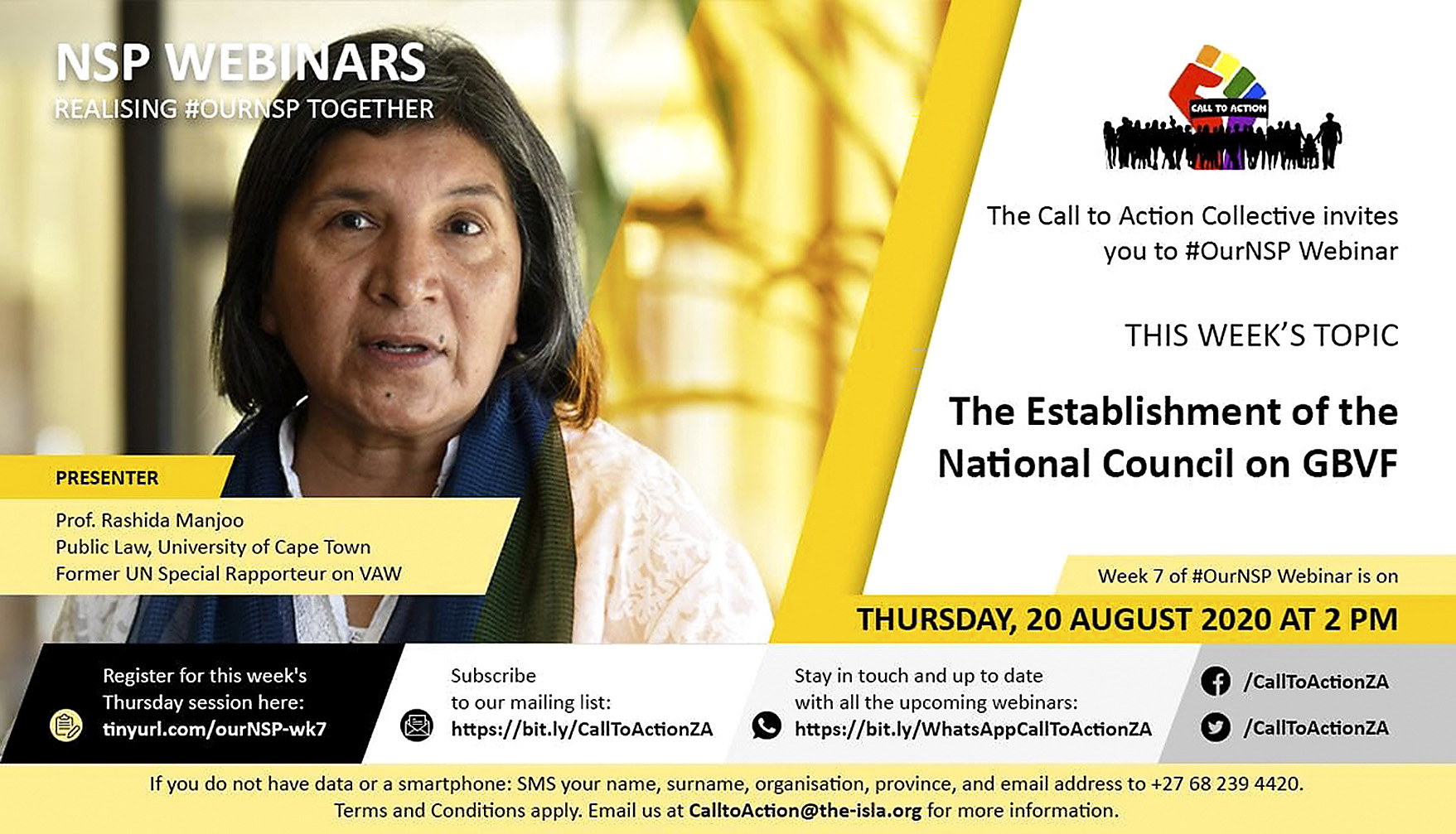 Missed the previous webinars? Catch them here. You can also subscribe to receive weekly updates on the webinars, including presentations and speaker bios. 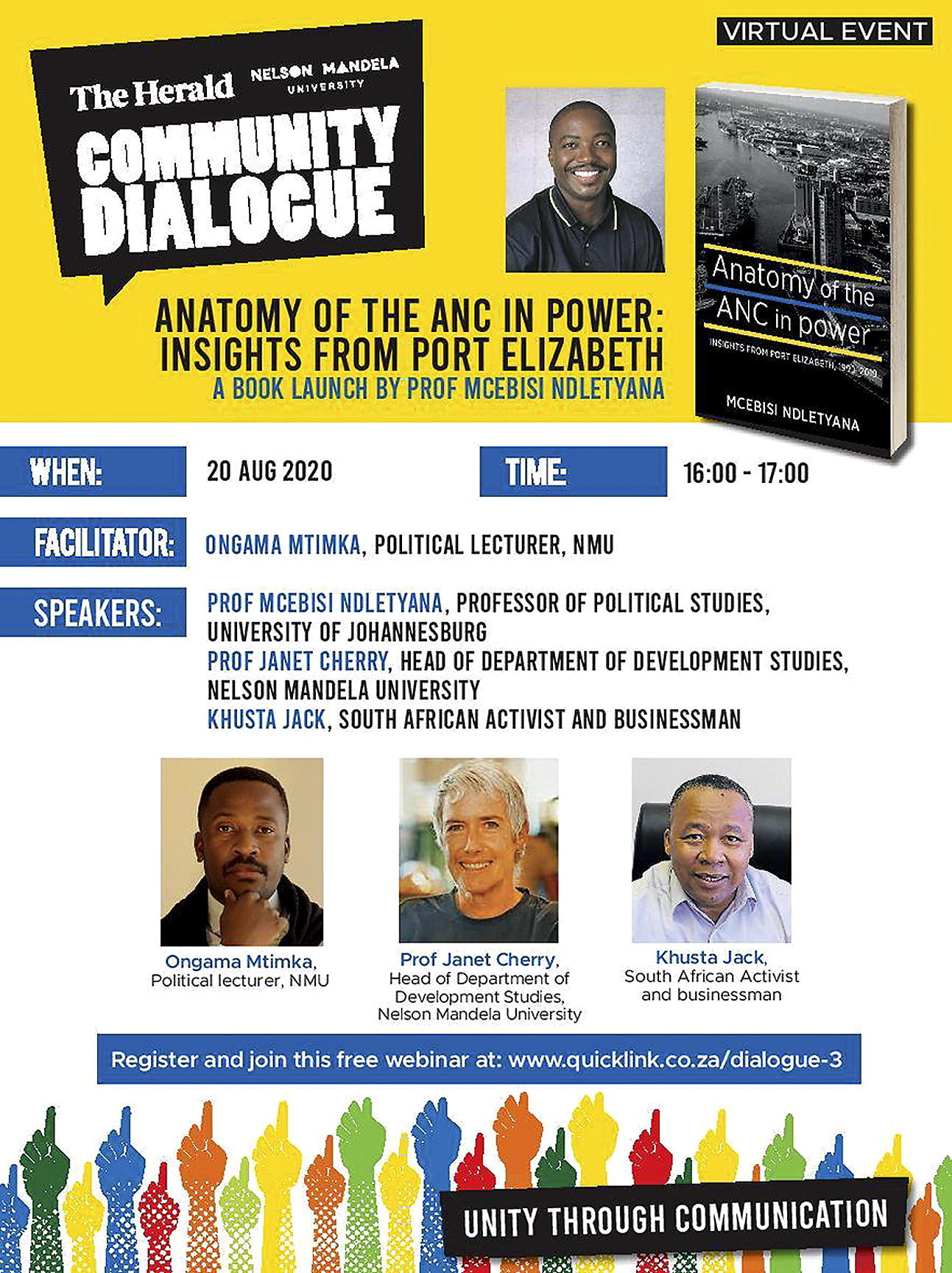 Ndletyana’s book explores how Port Elizabeth was once a hotbed for political activism, producing some of South Africa’s greatest Struggle heroes. DM/MC

South Africa is full of activists whose voices and campaigns need to be heard, and we want to report on all of them. So, wherever you live, if you have virtual events or meetings which you think other activists ought to know about, write to us at [email protected]

Also, please sign up for our weekly newsletter here.