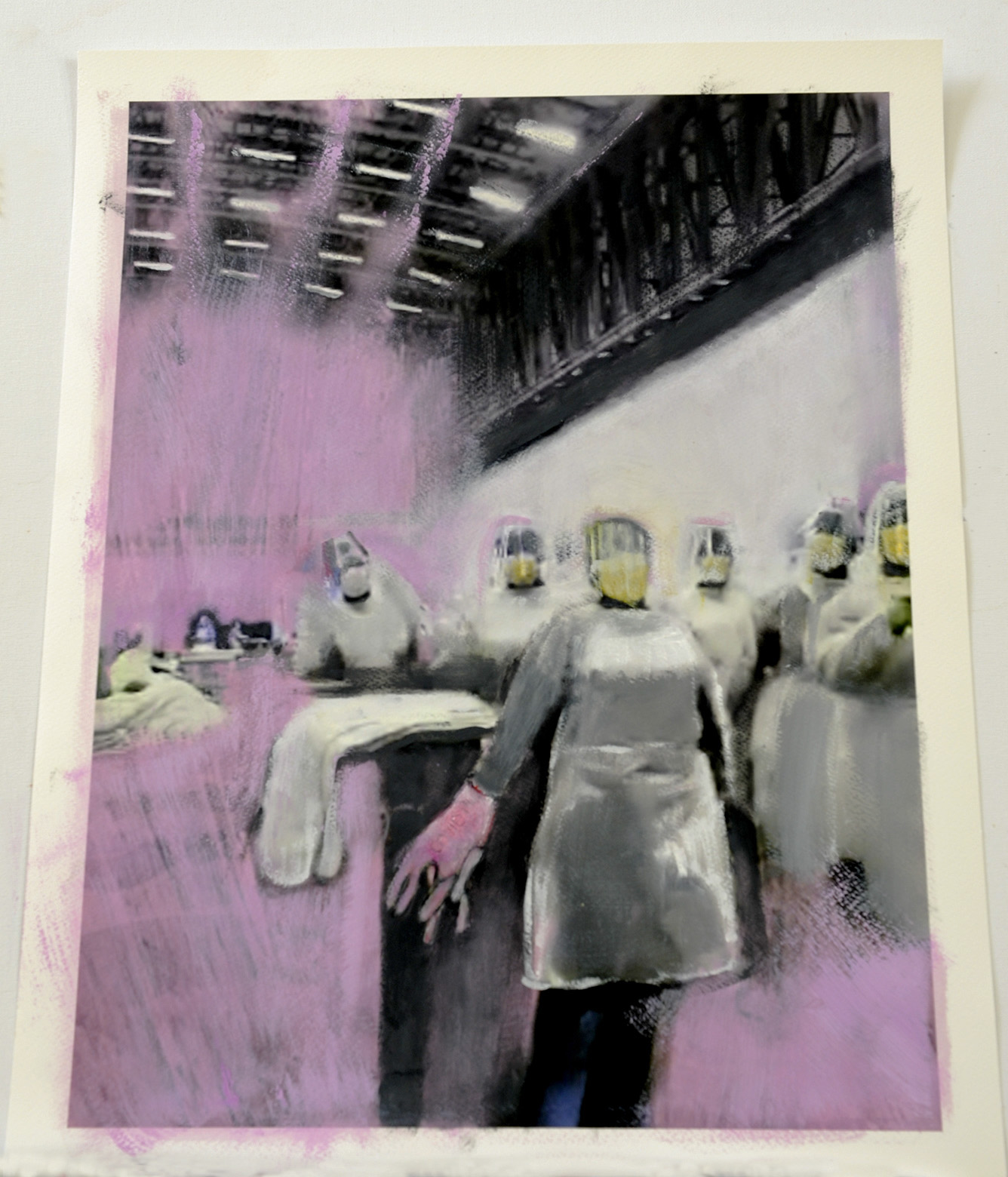 Greeff is moved by nurses’ dedication to care and healing and she wonders whether it is old-fashioned to call nursing a calling? (Photo: Joyrene Kramer)

‘Nurses are heroes’ is the ubiquitous narrative of 2020. Mostly, though, they are simply human. A South African nurse-turned-artist explores the image of the nurse we carry in our consciousness, in a series of warm, sometimes humorous, representations that give the viewer a sense of both the history of nursing in South Africa, and the generosity of the nursing spirit.

As the coronavirus began making its way around the world, Sue Greeff started painting a large canvas she ended up calling, New World Order. In it, five figures appear to be fleeing. Three of them are naked: a mother with a baby swaddled in a blanket, a father, a prepubescent child. Beside the mother is a woman in black, who may or may not be pregnant. The father is carrying a black bundle on his head. All but the baby are wearing masks.

It’s a haunting image of uncertainty, vulnerability and displacement. Of leaving one thing. Of not having arrived at the next.

The weeks of lockdown went by. Every day, Greeff placed one flat stone on top of another on a wall outside her home. Three weeks; three mini cairns. Five weeks provided five. In prehistoric time, piles of stones were used to indicate burial sites.

The world which those who are alive now knew before 2020, is dead.

Greeff began to think about how hard lockdown was, even for people who were historically economically and psychologically resilient. She remembered her time as a psychiatric nurse. Then she started to think about nurses in general. And her old nursing friends. She found a photograph of herself with some of her nursing colleagues.

She painted herself from one picture dated 1980, inserted a cigarette between her fingers, put a clock on the wall behind her. The nurse of the painting, the self-portrait nurse, is wearing a black cardigan over the typical white nurse’s dress of the previous century. She has an old-fashioned white nurse’s cap on her head. The painting is called Killing Time. The work sold within days.

It takes a disaster for the world to focus its gaze on the noble professions. Firefighters were the heroes of 2001 after the World Trade Centre attacks, and have been the recipients of free-floating anxious gratitude for their valour during the devastating fires in places like Cape Town, California and all over Australia.

This year is, without a doubt, the year of the nurse.

From children’s rainbow paintings in windows around the world, to enigmatic street artist Banksy’s gift to a hospital of a drawing of a boy playing with a doll dressed as a nurse, but who looks like a superhero – artistic outpourings of appreciation abound.

But Greeff’s work feels more personal, more “participatory”. She no longer practises as a general nurse, a psychiatric nurse or a midwife, but her vision of nurses in this growing body of work she has been drawn into is stripped of syrupy veneration.

The world probably didn’t need the World Health Organisation to declare 2020 the year of the nurse and the midwife to focus its attention on what has always been an under-the-radar profession. A spontaneous gratitude towards frontline Covid-19 warriors flowed from everywhere and reverberated, quite literally, through streets of cities across the globe. Nursing, which seldom gets attention in the media, has suddenly been valourised.

Greeff went through more old photographs from when she was a nurse in the seventies and eighties. She began to paint over them, a practice that was all the rage in the 19th century, when photographs were mostly black and white and overpainting was thought to render them more realistic. She wasn’t making her photographs more realistic though. She was making them more vivid, with loud colour accents in unexpected places – like bright lime eyeshadow on a nurse whose face has been washed in white – blanking out backgrounds, or highlighting or changing certain other details.

She posted her images on Instagram and soon her DMs were flooded with nurse pictures from all over the world, representing nurses as they are now, and as they were then.

One that immediately struck her was a group of nurses at the Cape Town International Convention Centre’s Covid-19 field hospital singing to their patients. This sort of cheerfulness and spontaneity would, she imagined, bring “hope and healing” to their patients. It’s an act of love, not of duty, to bring song to the suffering.

The juxtaposition of nurses from the last century with nurses now, in the artist’s alchemical rendition, creates historical tension in the viewer’s mind, particularly around gender and race.

“What strikes me most is how the iconography has changed,” Greeff says. “There was a very distinctive look to nurses in the past. Now, most medical staff wear scrubs so it’s hard to distinguish nurses from doctors in the medical team.” 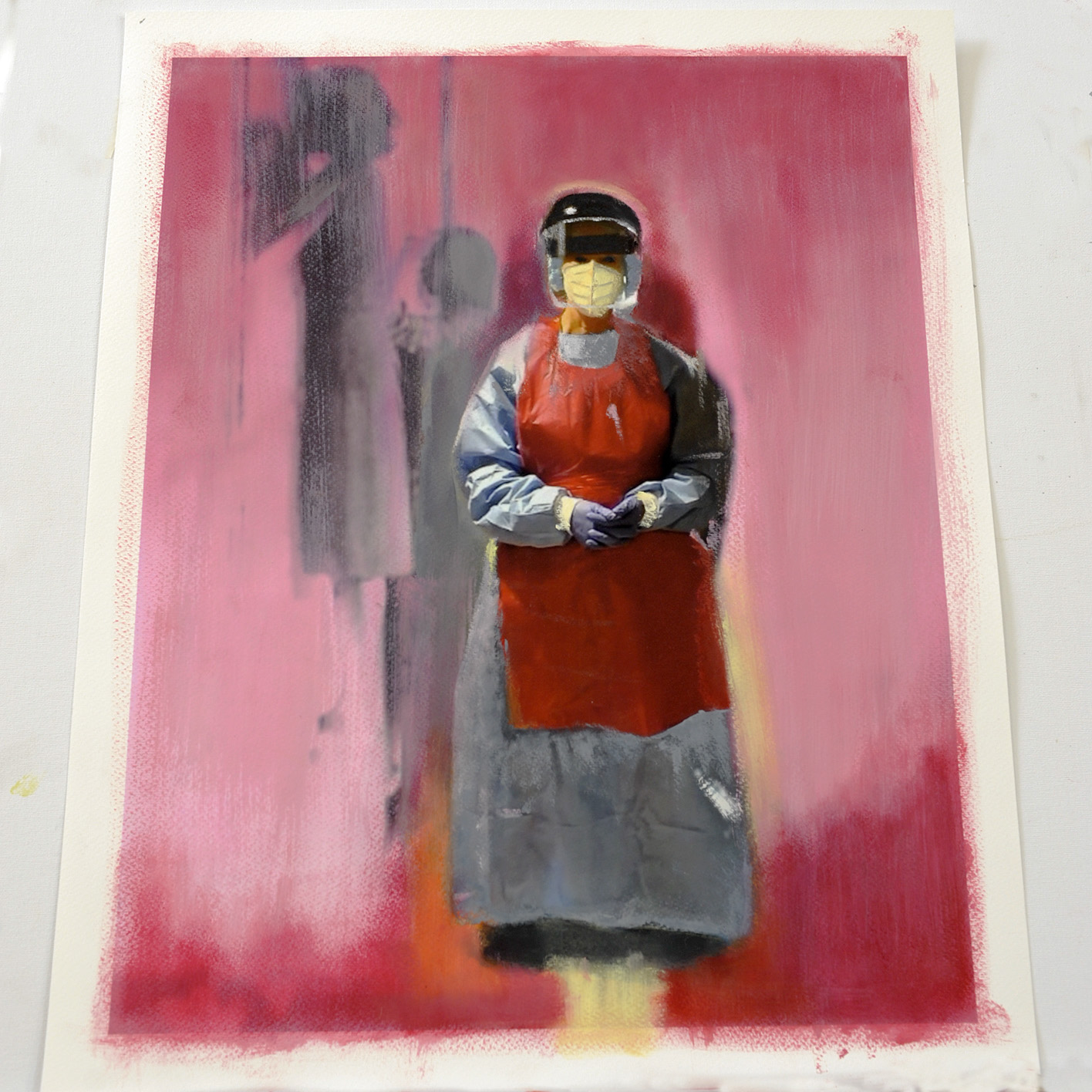 Most nurses in South Africa are women. This fact probably goes to the heart of why nursing is undervalued in society. For many decades in the 20th century, nurses fought hard to have training provided at universities so that they could be valued for the professionals they are. Universities were resistant. Looking after sick people was generally considered – perhaps still is generally considered – to be an extension of domestic labour.

When nurses were hailed as heroes recently, one British nurse was quoted as saying they didn’t want to be seen as heroes, but they would welcome having their professional status universally acknowledged. Underestimating the value nurses provide to healthcare systems across the world appears to be a common problem.

One wonders whether this lack of recognition is among the reasons there is a global shortage of six million nurses, as Dr Tedros Adhanom Ghebreyesus, director-general of the World Health Organisation, stated earlier this year.

Greeff’s nurses’ series, which is a developing body of work, was spotted by 54asOne, a non-governmental organisation which “exists to re-imagine and reshape healthcare in Africa”. The organisation was inspired by her paintings to hold an auction of artwork donated by current, retired or ex-healthcare workers and sent out a call for donations.

A virtual auction of all the work, which will be managed by an auctioneer who is also a neurophysician, will be held in the first week of September and the money raised will be used to purchase PPE. SA Health, a supplier of medical consumables, has committed to matching money raised with PPE.

Florence Nightingale was born 200 years ago. She lives on in the public imagination as the revered and iconic standard-bearer of modern nursing practice. She was known as “the lady with the lamp” because her dedication to care meant she would carry a lamp from bed to bed while checking on wounded soldiers at night.

The image of nurses as courageous – as providing service selflessly, sometimes in the face of extreme danger – is alive in the minds of the public in 2020, perhaps even more so than in times of war, when nursing services are directly observed only by those close enough to the frontlines to see who attends to the wounded – those who can see the person “with the lamp” who checks on patients in the night.

Covid-19 has made everyone witnesses or potential witnesses to what a world without service, care and duty towards strangers would be like. Many people with family in hospital have relied on and been almost tearfully thankful to nurses who act as conduits of information and messages between the isolated sick and their anxious loved ones.

For Greeff, what has remained true of nurses since she trained in the seventies, is that there is a fundamental and “inherent empathy” that nurses seem to have, and which they retain long into their careers.

“Perhaps it’s an old-fashioned idea, but I think that maybe nursing is still a kind of ‘calling’,” Greeff says. And while she recognises that the words “hero” and “heroic” are limiting, she does think nurses should be celebrated in all their human fallibility and ordinariness. More than that, the awareness of how undervalued they are – at a time when anyone can suddenly find themselves reliant on nursing care – might prompt a change of attitude in the world.

“I think people might start considering what is important, what we have valued until now, and whether cold capitalism is how we want to continue living. Or are we going to start looking at our humanity?

“I suppose what this series of images of nurses does, for me anyway, is pose the question: what is it that we value? And where might benevolence, selflessness and empathy rate in a post-Covid world?” DM/MC