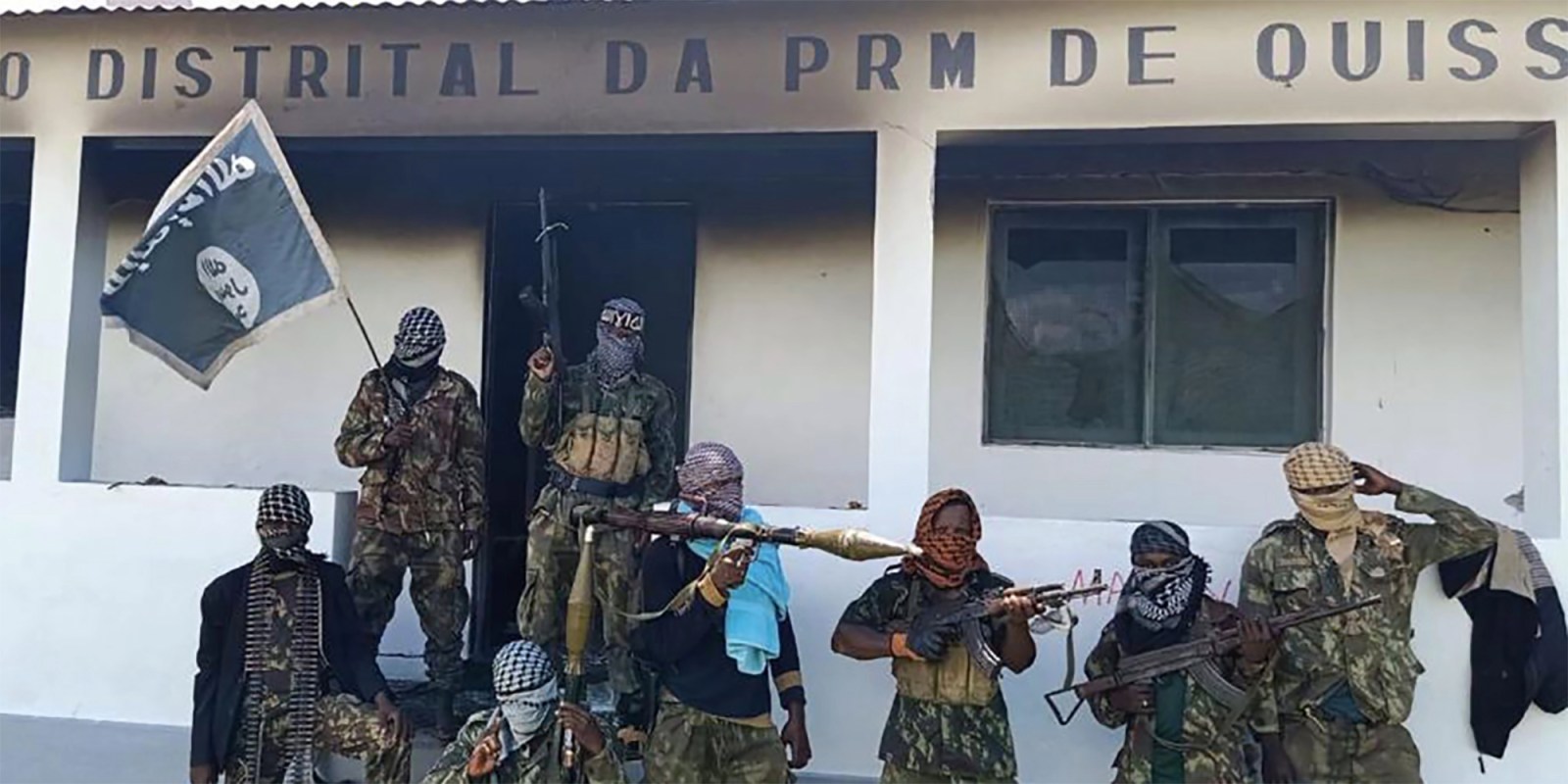 Sources said Mocimboa da Praia was now under total insurgent control and the invaders were likely to remain in control for a long time.

Insurgents affiliated to Islamic State once again took control of the strategic port town of Mocimboa da Praia in northern Mozambique after heavy fighting this week, inflicting heavy casualties and forcing Mozambique government troops to flee the town by boat.

At least 55 government army recruits were reported killed over the past few days in the running battles culminating in the fall of the port in Cabo Delgado province, security sources said. The main reason for the insurgent victory was that government forces had been cut off and had run out of ammunition.

Sources said the South African private military company Dyck Advisory Group (DAG) which has been providing air support to the Mozambique army for several months, had been unable to resupply them with enough ammunition as its helicopters had had to fly too far to refuel.

As the insurgents captured the town on Tuesday, they sank one of the government’s HV32 interceptor vessels with an RPG-7 grenade launcher in the harbour. It was not clear if this boat was trying to bring in ammunition or carrying fleeing government soldiers.

Sources said Mocimboa da Praia was now under total insurgent control and the insurgents were likely to remain in control for a long time. They have taken the port town several times since the insurgency began in October 2017, especially this year. They usually retreat after a few days, rather than taking on heavy government reinforcements.

Government troops suffered heavy casualties in the fall of Mocimboa da Praia this week, sources said. On Friday the Mozambique army was driven out of the villages of Awasse, Anga, and Ntotwe near the port town.

All the government forces had retreated to their large military base in Mueda, southwest of Mocimboa da Praia.

“Just before Awasse they were ambushed by a very large group of insurgents; 55 recruits were killed and more than 90 wounded. The bodies arrived in Pemba by the truckloads.

The security source said he expected that the insurgents would not occupy Mocimboa da Praia indefinitely. The port has been the main target of the insurgents, possibly because of its commercial significance as international gas companies preparing to develop the nearby Rovuma natural gas reserves use it to offload supplies.

The security source said the DAG helicopters had tried to drop off ammunition to the port protection forces but had dropped it too far from the forward positions of the Mozambique troops. As a result, several government Marines had been killed in an effort to recover the ammunition.

Because the DAG helicopters were refuelling in Pemba – about 200km south – they had only been able to stay over the battle zone for a maximum of 15 minutes and then withdraw to refuel.

Five insurgents dressed in uniforms similar to those worn by the Mozambican military had killed five civilians and razed seven houses in an attack on Litamanda village, Macomia district on 8 August.

“I cannot understand why Macomia, Mueda or even Palma was not used [for refuelling],” the security source said. He added that DAG’s small fleet of aircraft had just expanded on Tuesday with the arrival of an ex-SA Air Force Alouette III gunship crewed by South Africans.

Jasmine Opperman, researcher at the Armed Conflict Location and Event Data project (ACLED), corroborated the basic facts of the fighting and concluded that it had been “a significant victory for the insurgents and for ISCAP propaganda. So, a massive win for the insurgents, a disgrace for the government.”

Cabo Ligado Weekly, a new conflict observatory bulletin monitoring political violence in Mozambique, run by ACLED, Zitamar News, Mediafax, and the International Crisis Group, said this week that “insurgents and government security forces have been in more or less constant running battles in the area since the evening of 5 August.

“Reliable casualty reports have not yet come through, but they are expected to be significant.”

Five insurgents dressed in uniforms similar to those worn by the Mozambican military had killed five civilians and razed seven houses in an attack on Litamanda village, Macomia district on 8 August.

“Other sources reported a funeral procession being attacked, resulting in an unknown number of kidnappings,” the journal said.

“By 8 August, security analyst Johann Smith was calling the fighting in Mocimboa da Praia ‘intense’ and reporting that insurgents were targeting Chinese-owned businesses — and sawmills in particular — in their attacks.

The journal said it had just heard of an earlier incident, from the week of 13 July, in which Mozambican security forces surprised six insurgents who were picking oranges at a grove in Ntessa, Quissanga district.

The insurgency will almost certainly be discussed at the annual summit of the Southern African Development Community (SADC), which will take place by video on Monday. At a recent summit of SADC’s organ on politics, defence and security, in Harare, regional leaders gave the organisation’s approval for individual member states to help Mozambique fight the growing insurgency.

“The insurgents were armed, but their weapons were not loaded, and the government troops were able to kill four of them and capture the other two. When the captured insurgents were asked to show the location of their base, they took their captors to the area near Cagembe where Mozambican forces had destroyed an insurgent camp days earlier.”

The journal said reliable accounts of the fighting, including casualty numbers, were hard to get.

“After five weeks in which the Islamic State made no claims to attacks in Mozambique, the group claimed on 6 August to have attacked two Mozambican army barracks in Mocimboa da Praia, killing or wounding 50 Mozambican soldiers, and making off with a significant stash of weapons and ammunition.

“There has been no confirmation of the details of the IS claim, but it did come with a new photograph of fighters with small arms ammunition, rocket-propelled grenades and AKM assault rifles.

“The mysterious but decidedly pro-government DefesaMoz website, conversely, claimed a government victory in Mocimboa da Praia on 6 August, saying that security forces turned back two insurgent attacks and killed 16 insurgents. No evidence was provided to back up the assertion, nor has the government corroborated it through any official channels.

“Part of what is preventing the gathering of casualty reports is the lack of electricity and cellular service in Mocimboa da Praia. From the start of this round of attacks through at least 8 August, electricity has been out and Movitel and Tmcel cellular services have been non-functional.”

The insurgency will almost certainly be discussed at the annual summit of the Southern African Development Community (SADC), which will take place by video on Monday. At a recent summit of SADC’s organ on politics, defence and security, in Harare, regional leaders gave the organisation’s approval for individual member states to help Mozambique fight the growing insurgency.

There has been considerable speculation about the possibility of South African or Zimbabwean or even a SADC regional force intervening in Mozambique. But nothing has been confirmed.

“Prospects for regional cooperation leading to direct military support remain dim, both because Mozambique is reportedly resisting action by SADC on the conflict in favour of seeking direct support from Zimbabwe, and because the SADC countries do not have excess budget and military capacity to send Mozambique’s way,” Cabo Ligado said.

Yet Zimbabwe also seems unlikely to provide any military support to Mozambique because of a lack of funding and troops that are not battle-ready as a result of the growing economic crisis in the country.

Mozambique’s President Filipe Nyusi will take over the SADC chair from Tanzania’s President John Magufuli at the summit. DM