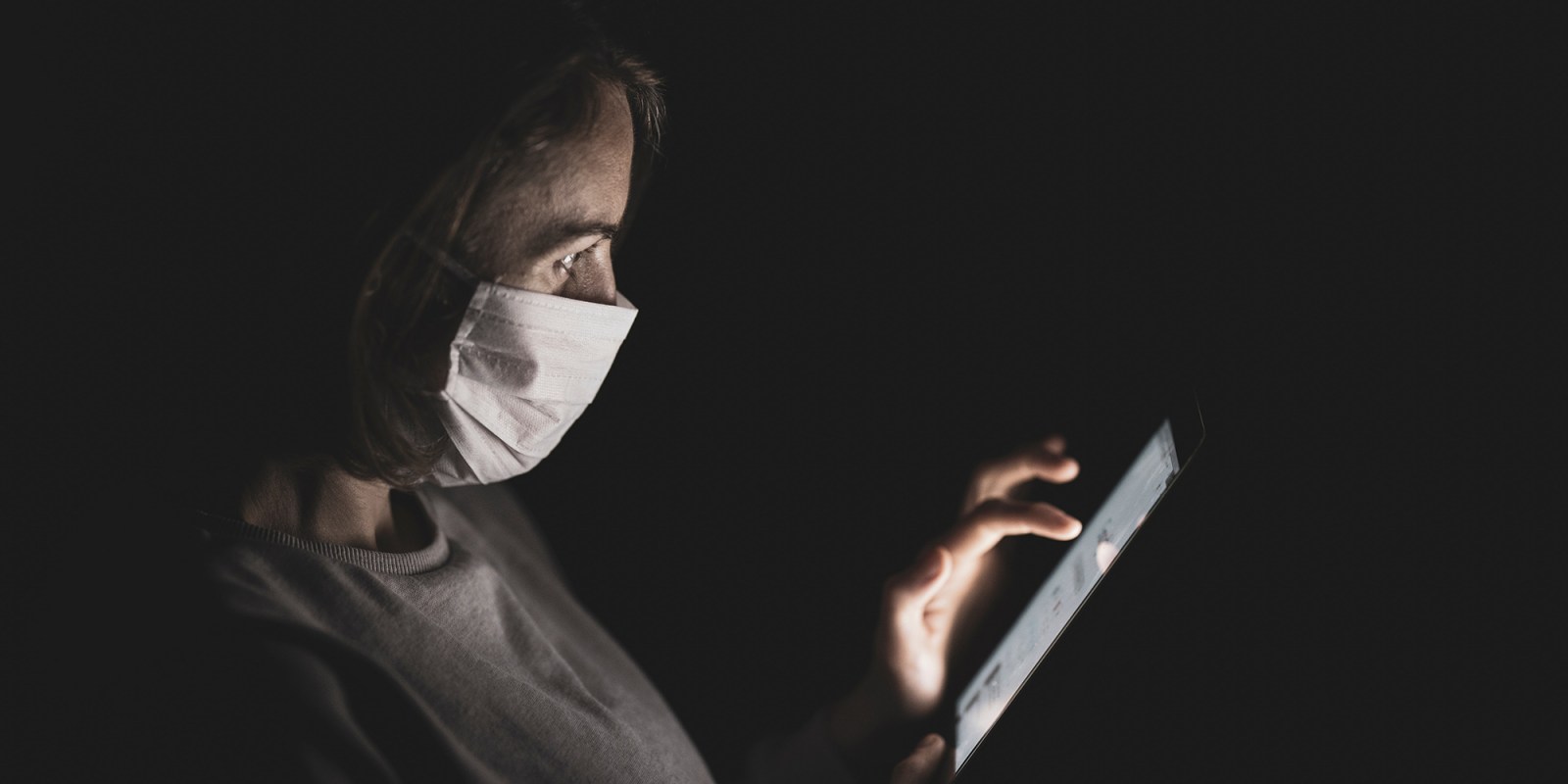 Over 100 days into the lockdown and we’ve experienced months of non-stop crises. A crisis such as the Covid-19 pandemic creates a perfect opportunity for those who wish to cause confusion, chaos, and public harm, mis- and disinformation enables them to do just that. Another week, more complaints from the fruitcakes, the nasty and the evil. Like the virus, we may win big battles, but the war is far from over.

The spreading of false information to intentionally cause public harm has always been part of information sharing. What is new is the internet, social media and other digital platforms that have made sharing this information that much faster, more accessible, and able to reach a massive audience in the blink of an eye.

This, among other things, is one of the reasons that disinformation during a time of crisis, is particularly dangerous, not only to our individual (and collective) health, but to the very core of what we stand for as a democracy. Using the Real411 platform, we have analysed disinformation trends which have largely focused on Covid-19. Disinformation is defined as “false, inaccurate or misleading information designed, presented and promoted online to intentionally cause public harm”.

Real411 has been up and running for just over four months and since the initial launch, we have received 622 complaints. Of these complaints, 601 have been reviewed, assessed, and appropriate action recommended, and taken. Most of the complaints have been assessed as instances of disinformation related to Covid-19, the pandemic, health regulations, scams, conspiracy theories and calls to encourage non-compliance with government regulations.

The weekly commentaries that we write aims to create awareness and push counter-narratives to the content found to be disinformation. We want to highlight some of the more concerning or interesting complaints, but also, point to some of the bizarre content that seems to make its way onto our timelines and social media feeds.

The selected complaints below highlight some of the more dangerous, bizarre and outright silly instances of disinformation found on social media platforms during the reporting period (27 July – 2 August 2020).

A long rambling WhatsApp message that uses facts like cinnamon to add flavour to what is more like a stream of panic. The focus is the Gauteng health system and in essence, the message suggests that the system is on the verge of collapse, with both public and private health facilities not coping. This is typical disinformation designed to instill uncertainty and anxiety, to heighten fear that the health system will collapse. It is a useful example to distinguish between fear-mongering and how a credible news entity would likely report the same thing if they were true.

Assume for a moment that the Gauteng health system was on the verge of collapse. While awful, given the stories of gross corruption around Covid-19 contracts and non-delivery, it isn’t too much of a stretch to think that it might occur. In such a scenario, a news report may still include similar information, for example, that the key health facilities have no more capacity. Any good journalist would then almost certainly include a comment from the Gauteng Department of Health and also possibly the National Department of Health. It is also likely in such a scenario that in addition to accessing key government officials, the story would also access a medical expert and/or front line staff. The story would then also most likely reference what steps are being taken to address the crisis.

So, while the media sometimes gets things wrong, the value of news is that while the subject may be depressing or awful, it should leave you more informed. So, as a useful tip for spotting disinformation, if after reading you feel more anxious, angry, overwhelmed or fearful, check it out before you share. A simple copy and paste of the content from the WhatsApp into your browser will soon give you a sense of whether there is any truth to it. If you don’t find anything easily, stop and instead of sharing with friends and family, report it to real411.org.za.

It doesn’t seem like a week goes by without some opportunistic scoundrel seeking to exploit the public’s financial insecurity and make money from the Covid-19 pandemic. This time, it isn’t greedy politicians, but people equally appalling, using some sort of phishing/clickbait scam. This approach, seen in complaint #667 uses disinformation relating to public government figures as clickbait, to encourage users to follow through on accessing the content.

It claims that President Cyril Ramaphosa and Pravin Gordhan will be giving South Africans who are struggling financial aid by means of Bitcoin. In an effort to give the content the appearance of some credibility, it is made to look like an online news entity.

This is a classic case of scammers exploiting the credibility of the news media to lure potential victims. One of the telltale signs is that the URL links to something called “anitquepillow.com”. So if you see a site and the name of the news entity doesn’t match the URL in some way, don’t trust it and check it out by doing a search. Even if the site seems legit, another key indicator that something is dodgy is the sounds too good to be true principle. As a general rule, if something sounds too good to be true, it usually is, and extreme caution should be exercised.

Yes. It’s back – the technology fear-mongering! As with most new technologies, there are almost always fears that it will be the end of humanity. Such fears are common and often have a lot of validity. We know, for example, how industrial revolutions changed societies with many positive aspects, but also some negative.

Similarly, the rise of the digital age has brought many positive developments, but also profound risk and dangers, including the scaling and easy dissemination of disinformation. The issue isn’t that technologies like 5G don’t have any health risk – indeed, it may well be that they do pose risk, but to suggest that they are the cause of Covid-19 or to link them to wearing masks as the complaint seeks to do, is just fear-mongering.

The problem, of course, is that such content thrives on the reality that we are still learning about Covid-19 and because it is new, it is very easy to make up nonsense about it and link it to other fears as is the case in this example.

672 indicates a slightly higher-grade effort at disinformation. That it was posted by a prominent public official is deeply concerning. The content submitted is a video of a black woman who we are told is a doctor. The fact that she is surrounded by a bunch of white people in coats behind her, who nod appropriately and listen attentively, is designed to make us think that this one person who is talking is speaking on behalf of a whole group of doctors. The reason for doing so is to suggest that it isn’t just one doctor, but a group and a group of doctors is surely even more credible than one doctor.

The “doctor” claimed masks were not necessary and also that she had treated hundreds of people with hydroxychloroquine. It is interesting how in this case, the speaker made a point that she was from Africa. Somehow, and rather ironically, given how ideas from Africa are usually marginalised, it was because she had been “treating people in Africa” that it served to justify why perhaps the treatment was not being used in the US. That it was an African woman appears to be one of the aspects that encouraged Floyd Shivambu to share the video, and he did so alongside Donald Trump and his son.

The video was quickly refuted globally and removed by platforms, and reported on in the New York Times. In addition to being disinformation, that example also highlights the lengths people are prepared to go to in order to push disinformation. In addition, however, it also clearly demonstrates how dangerous it can be when public officials repost disinformation. The lesson is clear – even if someone who speaks and offers information that confirms your own biases, or even if they represent a party or views you might support, check and verify that it is from a credible source of news and information.

What is noticeable, however, is that there seems to be a correlation between the number of complaints received and the amount of disinformation found, as shown in the graph below. Each complaint that is submitted gets assessed by three different reviewers – each an expert in their fields, including media, tech and legal. Once a complaint is assessed, it is sent to the secretariat (who is a media lawyer), and a final determination is made and further action is recommended, if necessary. 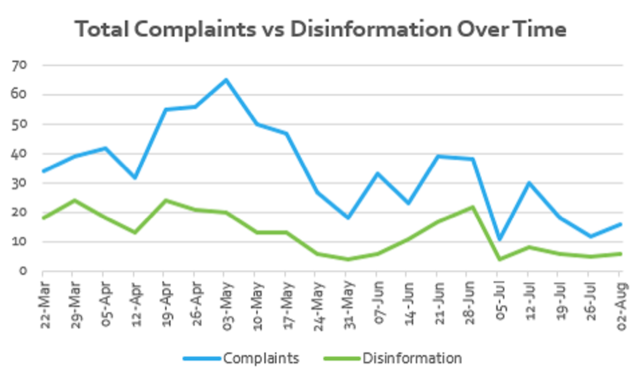 What this suggests is that the more complaints, the more opportunity to take action and issue counter-narratives to disinformation plaguing our online environment. 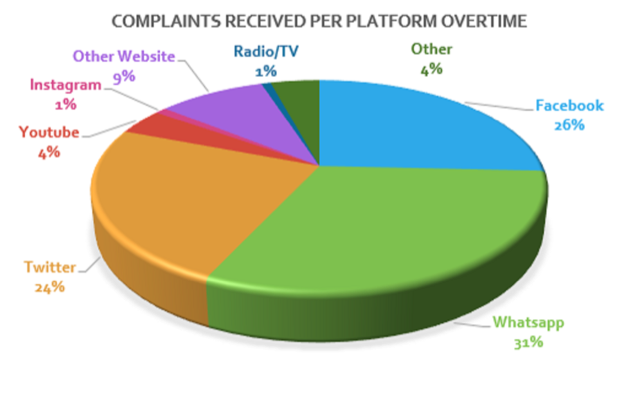 Twitter and Facebook follow WhatsApp as the most popular platforms that have complaints submitted related to content found. This is to be expected as WhatsApp is the most difficult to verify and remove, but is also the one that sits alongside messages from friends, and loved ones. DM