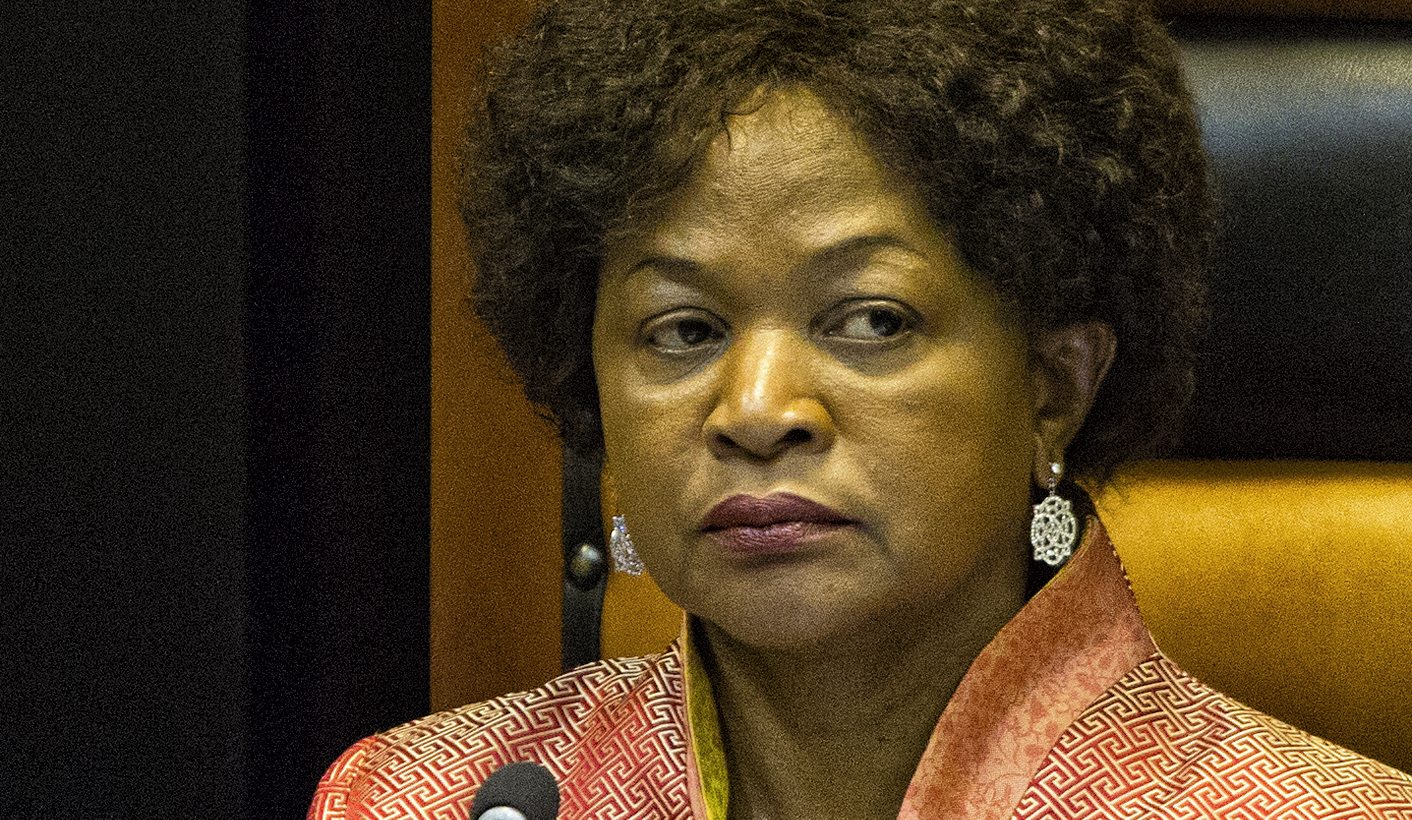 Former parliamentary Speaker Baleka Mbete, above, and former Cabinet Minister Sydney Mufamadi have been appointed by the president as special envoys to Zimbabwe. Photo: Speaker of South Africa Parliament Baleka Mbete reacts during a debate at Parliament in Cape Town

President Cyril Ramaphosa has appointed two special envoys to visit Zimbabwe to try to pull the country out of its downward political and economic spiral, after criticism of Pretoria for neglecting the growing crisis on its doorstep.

The president’s office announced on Thursday that former Cabinet minister Sydney Mufamadi and former parliamentary Speaker Baleka Mbete would “engage the Government of Zimbabwe and relevant stakeholders to identify possible ways in which South Africa can assist Zimbabwe”.

A statement said President Cyril Ramaphosa had appointed the two special envoys “following recent reports of difficulties that the Republic of Zimbabwe is experiencing”.

“The President’s Special Envoys will leave for Zimbabwe as soon as all the arrangements are made,” the statement added.

Ramaphosa’s decision to engage the Zimbabweans follows the Zanu PF government’s harsh crackdown on its political opponents, particularly before the nationwide protests scheduled for 31 July which security forces pre-empted by imposing blockades on cities and towns.

It is not clear what Mufamadi and Mbete’s mandate will be or how widely Ramaphosa has consulted with Zimbabwe’s opposition about their mission. On Thursday night Tendai Biti, first vice-chairperson of the main opposition party, the Movement for Democratic Change (MDC), said he was not aware of the visit.

Asked for his assessment of the likely success of the mission, Biti said:

“I don’t think they (Zanu PF) are ready for anything,” but added, “let’s see what they can do.”

The Ramaphosa administration has been growing increasingly concerned about the deterioration of Zimbabwe’s situation but seemed helpless to do anything about it.

She had told a seminar at Unisa that South Africa might need to go beyond the standard call for an end to international sanctions against Zimbabwe and “begin a process of reflecting on the solutions that could be considered to actively address the challenges”.

She noted that Zimbabwe’s “political dynamics are inextricably linked to the economy and thus should be confronted simultaneously”. She specifically raised “the possibility of initiating an inclusive political dialogue” in the country.

South Africa’s ambassador to Harare, Mphakama Mbete, had told the inaugural Political Actors Dialogue (Polad) Economic Summit in Harare in February that for Zimbabwe to revive its economy, the establishment of a social contract involving politicians, business people and citizens would be critical.

“Research shows that nations with disruptive political-economic situations are likely to be poor compared to those with inclusive economics, where the rule of law is protected and ransacking political manipulation is not tolerated,” Mbete had said, pointedly.

Yet Pigou had added that despite its awareness of the cause of Zimbabwe’s crisis, the South African government did not seem to have found an entry point to try to foster the political dialogue which Pandor proposed between Zanu PF and the MDC Alliance-led opposition and civil society opposition.

Whether it has now found that entry point will be critical to the success of Mufamadi and Mbete’s mission. Clearly some feelers must have been put out, at least to the Zanu PF side, and the fact that it must have approved the mission is a positive sign, since it has so far denied Zimbabwe is in a state of crisis.

President Emmerson Mnangagwa ousted long-time leader Robert Mugabe with military assistance in a de facto coup in November 2017. He announced an intention to institute political and economic reforms, in part to restore Zimbabwe’s international political and economic relations, including an end to sanctions. But the reforms were half-hearted and have stalled. The economy has continued its steep decline – recently aggravated by the Covid-19 pandemic.

… journalist Mduduzi Mathuthu’s home was raided and his sister was arrested on 30 July ahead of the planned 31 July protest. Chin’ono and Mathuthu had played prominent roles in exposing alleged corruption surrounding the granting of contracts to Mnangagwa’s son to provide the government with supplies to fight the Corona-19 pandemic.

One of the difficulties of any attempt at intervention is trying to understand the nature of the problem. It is not completely clear if Mnangagwa is a genuine reformer frustrated by hardliners in ZanuPF and the military — or whether he has only ever intended to implement cosmetic reforms in the hope of getting sanctions lifted.

Some analysts believe Mnangagwa and Vice-President Constantino Chiwenga, the former military commander who helped him topple Mugabe, are engaged in a power struggle which is paralysing Mnangagwa’s reform efforts.

The Mufamadi-Mbete mission will take place against the backdrop of a spate of recent arrests, assaults and even alleged torture of opposition activists and journalists.

These include the arrest and detention of Hopewell Chin’ono, a respected journalist and Jacob Ngarivhume, an opposition activist, on 20 July and Blessed Mhlanga, a senior journalist on 25 July. Chin’ono was again denied bail on 6 August.

Then journalist Mduduzi Mathuthu’s home was raided and his sister was arrested on 30 July ahead of the planned 31 July protest. Chin’ono and Mathuthu had played prominent roles in exposing alleged corruption surrounding the granting of contracts to Mnangagwa’s son to provide the government with supplies to fight the Corona-19 pandemic.

A global coalition of 13 human rights organisations said there had been 24 other attacks on media practitioners between 30 March, when Zimbabwe’ coronavirus lockdown began, and 21 July.

“Since then, three other journalists were reportedly harassed by the State security agents in Zimbabwe as at 26 July 2020,” the coalition said.

“Journalists including Frank Chikowore and Samuel Takawira are facing prosecution and charged with violating social distancing regulations after attempting to interview three opposition youth leaders who had been abducted and assaulted by alleged security force agents.

“We urge the Government of Zimbabwe to cease this obvious clampdown on freedom of expression and peaceful assembly, especially leading up to the planned July 31, 2020 protest action,” the statement said.

“We refer to the Ministerial statement dated July 25, 2020, issued by Minister of Information, Publicity & Broadcasting Services — Hon Monica Mutsvangwa, that explicitly states that Hopewell Chin’ono was not arrested for exposing corruption but rather for ‘using his social media accounts to incite Zimbabweans to violently overthrow the government’.”

“We wish to remind the Zimbabwean authorities of the aforementioned rights of citizens to assemble and protest peacefully; and the duty of law enforcement officers to provide the necessary protection during such times.

“We call for the Government of Zimbabwe to withdraw all malicious prosecutions against media practitioners and to release  Hopewell Chin’ono and Jacob Ngarivhume, and to drop all charges against Frank Chiktowore and Samuel Takawira.

“These sustained attacks on journalists are a disregard for media freedoms,” the coalition said. DM